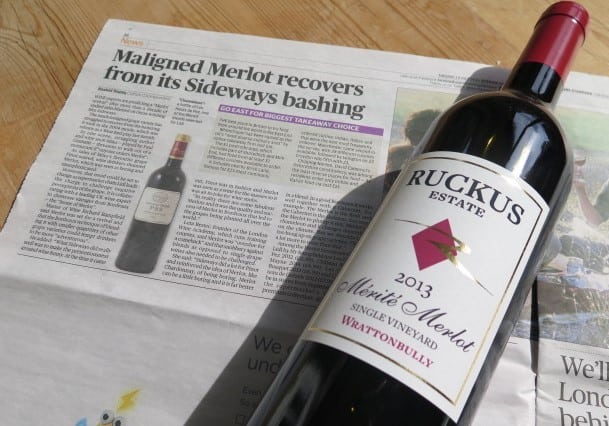 Even Colleen Miller describes typical Australian Merlot as “very ‘blah’…going from green unripe plum straight to prune in most years.”  The country’s longstanding clone of the cuddlier Bordeaux one (D3V14) has long been denigrated. Miller observes, “it crops unevenly and only loses ‘green’ flavours once it’s over 14.3 baume,” while Ruckus Estate Merlot’s ripe fruit flavours and tannins “kick in at a low 13+ baume.”  Armed with new-to-Australia clones, it’s fair to say Ruckus Estate is causing a ruckus.

Planted in 2006, these expensive imports from Argentina, Italy and France (Merlot clones 8R, Q45 and ENTAV181) are challenging received wisdom about Australian Merlot.  Merlot full-stop. Which would appear to be good timing since, according to this Evening Standard news story, Merlot is the comeback kid!  The wine has received rave reviews from Australia’s leading critics and its discerning sommelier community.

Clones are not Miller’s only secret weapon in the battle for top notch Merlot.  The Limestone Coast’s Wrattonbully region (which Tapanappa’s Brian Croser long ago told me was the Right Bank to Coonawarra’s Left Bank) can take a bow.  It’s a little warmer than Coonawarra (it is less exposed to winds), but cold nights are key to fruit intensity and balance (check out my report from a visit here).  As for site specifics, this single vineyard 100% Merlot in the Joanna section of Wrattonbully comes from a rocky sloping rise.  Rows are planted east/west on two principal soil types – Terra Rossa over limestone and iron-rich loam over a thin plate of clay with heavy limestone beneath that.

For Miller, this location creates Merlot with great complexity, structure and aromatics. She adds, “[W]hile we produce very good Cabernet for Treasury, for example, alongside our neighbours’ very good cabernet, we have something extraordinary with our Merlot.”  In fact, she observes, “one of our customers has a new clone planted further north and yet still buys our Merlot as they cannot get theirs to ripen nicely up there.”

Planted in 2006, Miller reports that the 18ha vineyard took about 6 years until the new Merlot clones were mature enough to produce the tannins and great fruit. She is excited that other wine companies have planted these clones in the last three to four years because “it will revitalise the tired reputation of Australian Merlot.”

Last but by no means least, I detect winemaker Sue Bell’s delicate touch in this Merlot. (Check out my notes on her own Bellwether label Cabernets, which I’m delighted to see are now being imported by Red Squirrel).  Evidently she ran with Miller and her husband Michael’s mandate to “shoot for the stars.”  Miller points out that, where Bell selected two different clonal batches, both from clay soils (which clones were planted on both soil profiles), Merité’s success is surely about clones and clay.

The hand-harvested fruit was picked on 5 March, naturally fermented, part whole bunch, in open fermenters in clonal batches.  Following a natural malo, it was aged in French oak, 50% new and bottled on 6 February 2015.  Just 920 bottles were made.

Sweet but very juicily persistent plum flesh with a nice little pinch of (plum) skin and loganberry dominate the mid-palate.  Perfumed blueberry, violet and a kiss of vanillin oak lend nuance. Blueberry can signify over-blown ripeness/sweetness in my book, especially when accompanied by vanillin oak, but not here.  Both are underplayed.  While velvety dark chocolate inflected tannins give a sense of plushness, opulence even, it’s this beautifully balanced Merlot’s persistence and fruit definition which stands out going through.  With a touch of salty minerality, a finely honed finish displays impressive line, length and freshness.  Merité indeed!   It is a cut above any Australian Merlot I’ve tasted and a good many from elsewhere too. I’m super-impressed.  13.5%  It retails for AUS $50