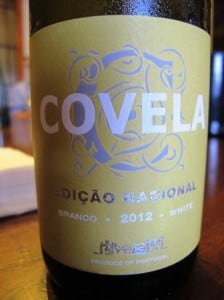 On Monday I wrote about Lima & Smith’s maiden Douro reds from Quinta da Boavista – their most recent acquisition.  In today’s retro-post I look back at the pair’s Vinho Verde debut from Quinta de Covela.  Subsequent vintages have, I might add, continued to show the strength of the Avesso grape at this estate, bang slap next door to the Douro.  Since they pinned their colours to its mast, the grape seems to have become a rising star.

Readers know that I’m a huge fan of single varietal Vinho Verde made from either Alvarinho or the Loureiro grape, the best of which are associated with single estates and specific sub-regions of this large DOC (Monção e Melgaço for Alvarinho, Lima for Loureiro).

This year I discovered another terrific single varietal Vinho Verde. So good, that I needed to taste it twice! Just to make sure I wasn’t over-excited the first time. It is Quinta de Covela Edição Nacional Branco 2012, which reveals just how good Avesso can be in the right place (Baião, on the right bank of the Douro river) and in the right hands (Rui Cunha).

Cunha has made wine at the estate since 1997. Until 2008 (when it fell into the hands of receivers and was neglected), it was owned by Nuno Araujo – an early adopter of organic and biodynamic viticulture – who carved out a reputation for very singular (very good) blends made from Portuguese and French grapes (which explains why they were labeled Vinho Regional Minho, not DOC Vinho Verde).

Back then, the Avesso was blended with Chardonnay and Gewurtraminer. Covela still produce this blend but I must say, the all new 100% Avesso is my pick of the bunch. And I’m not the only one who is impressed. Sold out since March, the estate’s new owners – Marcelo Lima and Tony Smith (a Brazilian and Brit) – have rented another four hectares of organically farmed Avesso and are planting more at Covela.

Since acquiring Covela in 2011, the ambitious duo have embarked on something of spending spree. While Covela will continue to focus primarily on white wines, their red capability has been very substantially enhanced following two Douro purchases: Quinta da Boavista from Sogrape (Offley) and the Qta. das Tecedeiras brand (with the right to produce wines from the estate) from Dão Sul.

It’s watch this space on the Douro reds, but here’s the scoop on the Avesso, a fabulous debut:

A slightly waxy nose reveals a hint of fennel. In the mouth subtle citrus and stone fruits are deliciously offset and teased out by a lively, dancing vein of crystalline, mineral acidity. A waxy, textural quality to the mid-palate betrays the estate’s sunny, southernmost and far east (in Vinho Verde terms) location on the cusp of the Douro region, additionally the use of wild yeasts, which bring a tangy, nutty note to the long finish. A textured but elegant, very interesting wine. Very good indeed. 13%