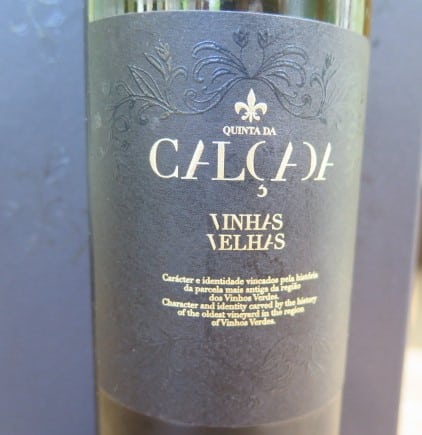 My jaw fell to the floor when I discovered that Quinta da Calçada Vinhas Velhas is sourced from the property’s original 1917 vines.  Planted in the same year as the property’s wine cellar was built, apparently they are the region’s oldest.  I’m used to centenarian vines in the Douro, but Vinho Verde.  This was something new!  And as you might expect, so is this complex, structured wine.

It’s not so surprising when you consider that Casa da Calçada, a Relais & Châteaux hotel with Michelin-starred restaurant (Largo do Paço), is in the same ownership.  Located in Amarante in the south-eastern pocket of Vinho Verde, I’d stayed in the 16th century hotel some years ago whilst in transit from Vinho Verde to the Douro.  But I arrived late and left after breakfast, so I didn’t dine there, let alone see any vines or wines.  But I do recall that the hotel was rather grand yet comfortable and the illuminated church of São Gonçalo and arched bridge over the river Tâmega below looked rather splendid. 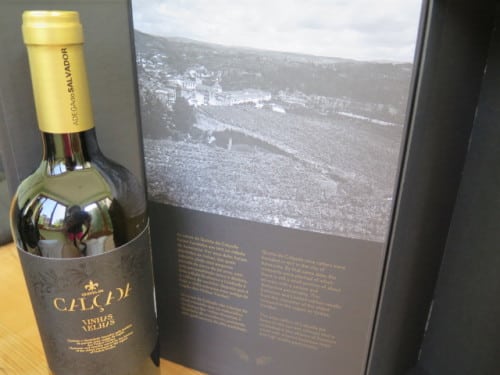 The old vines – a half hectare field blend – are planted ‘clos-style’ in a walled vineyard in the town itself; most of Calçada’s 50ha of vineyard are located around the sub-region of Amarante. The principal varieties are Alvarinho, Loureiro, Avesso, Arinto and Azal. The principal soil type is granite but, being so close to the Douro, there are transitional schist soils and the region is a relatively warm and dry for Vinho Verde.  This, together with high density planting, accounts for the relative body and concentration of the wines.

Here are my notes on the Vinhas Velhas (tasted at home) and regular cuvées which impressed me at last month’s Annual Vinho Verde tasting in London.  The wines are made by João Maria Cabral, a member of Young Winemakers of Portugal,who also makes Clip Vinho Verde and Camaleão Sauvignon Blanc from Lisboa.

This is the first Vinhas Velhas release.  It was also made in 2013 and will probably be made in 2015.  It’s a deeper, yellower hue than your typical Vinho Verde.  Partly because it is unfiltered but the nose tells a story too, with its creamy, nutty oxidative complexity suggestive of barrel and malo – a terpenic touch too.  These notes subtly follow through in the mouth, which is much more assertive about this wine’s Vinho Verde roots.  Contra-puntal acidity – a squeeze of lemon, tart pips included – makes for a bracing palate, firm with great line and length and a stony minerality.  It is markedly more assertive in its acidity and minerality than the junior wines in the range (in an interesting, structural way) and really begs to be enjoyed with food (on day two, standing up very well to an avocado salad dressed with soy-glazed sunflower seeds, which brought out its nuttiness).  So I can well imagine where this small production of around 3000 bottles ends up!  12%

This blend of Loureiro, Arinto, Azal and Trajadura is very much in the classical light, fresh, spritzy style of Vinho Verde.  It is very clean crisp and persistent with a salty minerality and a touch of spritz.  Eveything you’d want from a simple entry level Vinho Verde, with very well balanced, barely there residual sugar (13.4g/l). 10%

This 100% Alvarinho has lashings of exotic lime, pink and breakfast grapefruit – plenty of fruit to the mid-palate. The finish is punchy with zippy, zesty acidity.  Very good.  11.5%

This wine, a blend of Alvarinho, Loureiro and Arinto, was fermented and aged for 9 months in French oak barrels.  While the oak makes it mark on the palate, this wine’s creamy fruit salad mid-palate is more than a match.  Riffs of orange peel add pith and spicy punch.  Long – quite languorous –  in the mouth.  An ambitious style well executed.  12%