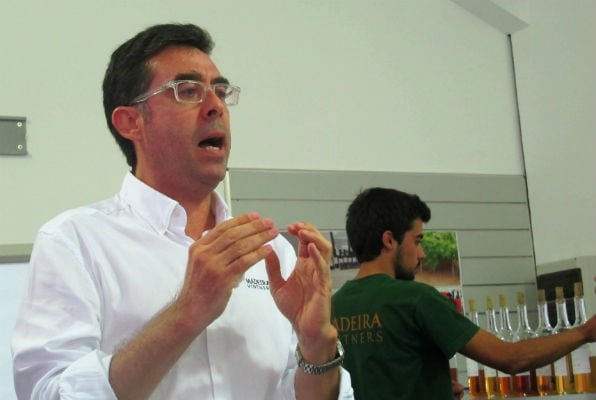 Yes we can: Madeira Vintners – a new approach to Madeira wine

During last November’s team Blend, All About Wine visit I finally satisfied my curiosity about Madeira Vintners, an all new Madeira producer.  Yes, that is not an oxymoron!   And let me tell you there was plenty to intrigue, which you can read all about in this report which is re-published with the kind permission of Blend, All About Wine.

The Declaration of Independence of the United States, signed in 1776, was celebrated with a glass of Madeira.  But it’s not America’s third president (author of the Declaration), Thomas Jefferson, who springs to mind when I meet Paulo Mendes.  Rather, I’m reminded of Barack Obama’s campaign slogan ‘yes we can’.

The most difficult business

Mendes, the tenacious CEO and architect of that rarest of breeds, a new Madeira firm, has had to be resourceful, unorthodox even, since, as he is the first to admit, “Madeira Vintners has a huge handicap – no old wines.”

Though Mendes is referring to the handicap of recreating Madeira’s stylistic profile from young stock (where Madeira is largely a marriage of old and young wines), this lack of old wines almost proved fatal from a legal perspective (about which more below).  The law provides that even new companies must possess 120, 000 litres of Madeira.

All in all it was hardly an encouraging start for this highly experienced management consultant who confesses, “at first I was the arrogant consultant who thought everyone was doing everything the wrong way.”  When it dawned on him that “the wine business is one, if not the most difficult business I had ever seen in my life,” the man with a curriculum vitae as long as your arm went back to school between 2010-2012, completing MBAs in Wine Marketing & Management at Bordeaux Business School and in Wine Marketing and Winemaking at University of California, Davis.

Still, he must have taken heart from his successful turn-around of Co-operativa Agrícola do Funchal (“CAF”), the supplier of agricultural and garden products which has been managed by the keen Madeira-born strategist since 1999.  It was a cash surplus generated by this “profound” turn-around which encouraged CAF’s diversification into Madeira wine in 2008 (Madeira Vintners is an independent division of CAF).  Mendes clearly thrives on challenge.

Between a rock and a hard place

Naturally, Mendes’ plans initially revolved around either buying mature stocks of Madeira wine or acquiring an established firm so that he could comply with the minimum stock-holding regulations and produce Madeira wine from the off.   Unfortunately, he tells me, none of the existing firms would sell him stock and “we lost all the acquisition bids,” most recently to Pereira d’Oliveira who acquired Barros e Sousa last year.  It left him between a rock and a hard place.

Rubbish in, rubbish out Elaborating on this strategy Mendes explains that he is betting on the quality and provenance of his raw material in a bid to differentiate Madeira Vintners from the competition.  Alive to the stark reality that “either we have above average quality, or we are dead” it certainly makes sense where, with only young wines to sell, Madeira Vintners will be targeting entry level consumers whom Mendes believes are currently not well served.  Dismissing many of the tourist circuit entry level 3 Year Old Madeiras as “not suitable for drinking, only culinary use,” he believes it is imperative for the island to raise the threshold of basic quality wines if new consumers are to explore the category and not to be put off by it.

For this reason he has abandoned the traditional spot market in order better to control grape quality. In Mendes’ opinion, because the island’s predominantly small growers (many of whom are gardeners or farmers, not viticulturists) want to sell their grapes at the first opportunity and the agents who operate the market are paid by the kilogram, there is little incentive to let grapes hang until they have attained the correct sugar acid balance. Too many grapes, he says, are picked at the minimum ripeness level (9% potential alcohol) and, for Mendes, who frowns on “Madeira that looks like Port,” these high acid grapes require unnecessarily high sugar additions.

Cutting out the middle man, Madeira Vintners deals directly with larger, contracted growers who tend to be more professional.  Still, Madeira Vintners works with them year-round to ensure that the vineyards are properly looked after and the grapes picked at the optimum time.  In return for later-picked, riper grapes, Madeira Vintners guarantees it will buy all the grapes and pays its growers an above average rate.

It’s not the only financial incentive for quality.  Mendes also pays growers more if they keep down gluconic acid levels, whose formation is associated with botrytis cinerea (a mold).    Too much and Madeira Vintners won’t even harvest the grapes. The rigorous selection process continues at the company’s shiny new winery where, Mendes boasts, Madeira Vintners is the only firm to sort grapes on reception as well as in the vineyard using a sorting table.  He says there is a quantum difference between sorted and unsorted grapes; the former have fruitier aromas and none of the earthiness associated with mold.  Estimating that 5-10% of hand harvested grapes are discarded he admits, “it’s a pain and expensive but we believe that if we sort the grapes, we’ll have pristine grapes.” This year, Madeira Vintners bought 110 tons from just 20 growers whose production averaged three tons – a sizeable amount by Madeira’s standards.  It allows Madeira Vintners to process each growers’ harvest separately (the winery is equipped with relatively small format fermenters, between one and ten tons).  “Why spoil the wines by blending” he asks, “when you can reflect the grower, the soils and the weather?”

By adopting this small batch approach, Mendes is deliberately creating a point of difference from the competition. As he pragmatically puts it, “to survive and bring complexity we are working with as many lots as possible in the vineyards,” including Listrão (a.k.a. Palomino) and Caracol from neighbouring island, Porto Santo, whose calcareous soils differ from Madeira’s volcanic terrain.  Keen to court a new audience where, he concedes, traditional connoisseurs are not his natural constituency, Mendes is aiming “to bring to the Madeira enthusiast a new approach where ‘terroir’ matters.”  He is even considering labelling wines by the grower and/or the vineyard. Terroir-driven complexity is one thing, but what about the unique age-derived intensity and complexity of premium Madeiras (Five Years Old upwards)?  These characteristics (traditionally the function of years of oxidative cask-ageing) define Madeira and are a pre-requisite to obtaining the Madeira Wine Institute’s seal of approval. Will time remain Mendes’ enemy until he has accumulated stocks of old wine?

While asserting “just because we’re a new company doesn’t mean we don’t believe time is key,” Mendes believes he has found a work-around – his very own Madeira wine particle accelerators.  Essentially, it involves “using lots of different processes in the winery” which, if all goes to plan, will help attain the complexity and profile of five to ten year old Madeiras in just three years. During fermentation, these techniques include cask fermentation, cold maceration, passing by flotation, full fermentation on skins and malolactic fermentation.  It made for a novel tasting of 2013 wines which showcased how these methods can alter the profile of Madeira, sometimes dramatically.

Cask fermentation introduced greater wood and cognac derived complexity (the barrels were sourced from Remy Martin).  The bigger the barrel (they range from 350 litres to 600 litres), the better the oak integration. It was also fascinating to see the difference between wines fermented with temperature control (20 degrees Celsius) or without.  The former produced a much better balanced wine with more fruit and fragrance to balance the alcohol. While up to 10% of wines are being conventionally canteiro (cask) aged for the minimum five year period, Mendes has departed from tradition when it comes to the estufagem process of heating the wines in tank (traditionally wines are held for three months at 45 to 50º Celsius).  His more differentiated approach seeks to introduce greater complexity – different blending options – via different estufa sizes (40.000 litre, 10.000 litres and 1.000 litre) and heating the estufas to slightly lower temperatures than the norm, with slower temperature variations over longer periods.  The aim is to mimic the cargo hold ageing of old when Madeira was shipped across the equator and back to achieve its signature scorched earth (madeirised) tang. Mendes is also banking on the use of micro-oxygenation during the estufagem process to replicate traditional cask oxidation.  Of those 2014 samples we tasted, those which had received oxygen management were rounder – more precocious.

No guts, no glory

With no wines yet to show for his efforts the question on everyone’s lips is can this underdog swim against the tide of tradition, or will Mendes risk becoming a beleaguered messiah like the current US President? Only time will tell but, as they say, no guts, no glory. I’m looking forward to tasting Madeira Vintner’s first releases.  They are currently scheduled for 2016 provided that Mendes (and select customers) think they are ready.  Where fortified wines struggle to remain relevant to generation X and Y, Mendes’ fresh perspective on Madeira – terroir-driven, complex but clean wines with balanced but lower alcohol (18 degrees maximum), lower sugar and acidity – is surely a welcome development.