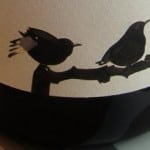 Oenanthe leucura – the Black Wheatear, an endangered species spotted among the vineyards

After Monday’s post about Niepoort’s thrilling new single vineyard wine Turris, here’s yet another illustration of why the Douro has been described as a winemakers’ playground.

They are made by Duorum’s José Maria Soares Franco who, when he made Barca Velha, followed the tradition of blending grapes grown at lower and higher altitudes. Both are sourced from old field blend vines (so made from a beggars’ muddle of traditional Douro varieties) at Quinta de Castelo Melhor, the Douro Superior (pictured). Cota 200 comes from rows very near the river, while Cota 400 comes from the vineyard’s upper reaches.

Grapes for both wines were carefully selected, then de-stemmed. Following a pre-ferment cold soak, during which time they underwent “robotized treading” in stainless steel lagares, they are fermented in stainless steel tanks where I’m told the greatest extraction possible was attained via pumping over, delestage and a long post-fermentation maceration.

The wines were then aged in 225 and 300 litres French oak barrels for 24 months, 70 % of which was new (the balance being second and third year barrels).

Here are my tasting notes. Here is an earlier report on a visit with Duorum, who are a newcomer at next month’s New Douro (trade) tasting – details of which you can find below:

A markedly deeper hue with more opacity. The fruit spectrum to nose and palate follows suit – sweet blackcurrant, baked prunes and plum – deep reserves of chocolatey fruit, well supported by muscular tannins. With its savoury (mature) layers of wood, liquorice and cinnamon spice, leather and gum cistus, this is a rich, ripe wine – full bodied, warm, earthy and satisfying. One might even say a little porty (those prune notes, the concentration), which led me wrongly to suspect it was from the lower, warmer part of the vineyard (I first tasted the pair blind). But perhaps I should have paid more attention to the longer finish of this wine. Juicy, mineral acidity subtly plays across the palate, teasing out layers and length, resulting in a much more complex wine. 14% abv.

Paler, with less opacity and, all round, less oomph than Cota 400. It reveals blackcurrant, raspberry and smooth plum fruit laced with violets, dark chocolate and creamy, toasty vanillin oak. Though it’s not as concentrated or broad shouldered as Cota 400, rich ripe tannins lend weight. Good if not as expressive or involving as Cota 400. Perhaps a function of a warmer site’s shorter hang times? 14% abv