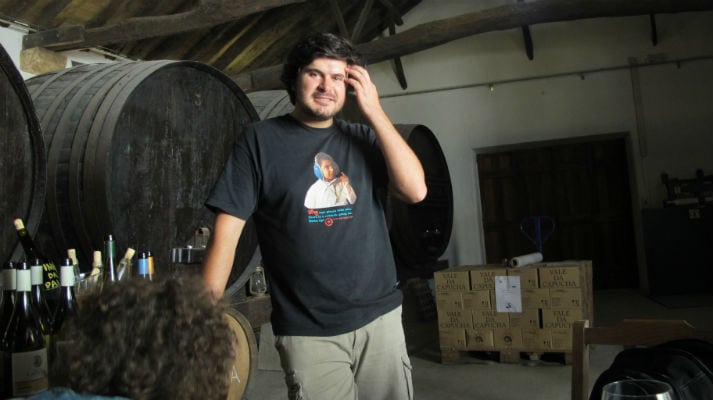 Next week I’ll be presenting a Lisboa tasting and showing my picks from a team Blend, All About Wine trip to this large, hilly, region last September.  Preparing the tasting sheet brought home that less than half of the producers have UK representation.    Happily, the producer in today’s post, Vale da Capucha, is one of them.  I’m really looking forward to catching up with this thoughtful organic grower and winemaker later this month at Portugal’s avant garde, artisanal fair, Simplesmente Vinho.  Rising star Pedro Marques is thrilled to have been invited to participate this year.

Pedro Marques’ story is familiar among Portugal’s young winemakers. Although he is the fifth generation in his family to make wine, the thirty-four year old is the first to have studied winemaking. He is also the first to have broken with the region’s tradition of focusing on quantity as opposed to quality. These days the wines which come exclusively from his family’s 13 hectare estate, Quinta de S. José in Carvalhal, Torres Vedras, Lisboa, are labelled Vale da Capucha. Marques made his first Vale da Capucha wines in 2009. So how has he made the switch from quantity to quality? As this candid winemaker will be the first to tell you, it is work in progress where he has “cut with the past and started again,” planting new varieties which he is getting to know better with each vintage. But with good reason he is clearly pleased with the decision to focus more on white wines which are better suited to the family quinta’s humid, maritime climate than reds. Wines made largely from non-local higher quality grapes – the Douro’s Viosinho and Gouveio, Alentejo’s Antão Vaz, Vinho Verde’s Alvarinho and even France’s Viognier (though he admits the latter was a mistake).

But much more important than the grapes (which he describes as “quite neutral”) is the terroir. Marques is determined to express a sense of place in his wines – to convey the freshness and saltiness which comes from the high limestone content of the family vineyard’s fossil-strewn calcareous slopes which are located just 8 kilometres from the Atlantic coast. This informed his decision to farm the vineyard organically (it was certified organic in 2012) even though it has made for a difficult vintage this wet, cool year with, he estimates, 30-35% crop loss owing to disease pressure. It also informed his decision to make his wines naturally with no added yeasts or enzymes. Rather, the juice for Vale da Capucha’s hand-picked grapes is settled and fermented naturally (with wild yeasts) on the lies at relatively warm temperatures (around 18 degrees centigrade). Why? Because Marques values texture and body over aromatics, especially the primary ester-driven characters which derive from the fermentation process itself. It is, he believes, a way “to distinguish the wines.” Moreover he can afford to build body and texture because, as he points out, he has the opposite problem from most in Portugal – the high acidity which keeps Vale da Capucha wines so animated. Though made from relatively young vines planted to grape varieties which are new to the region, Marques wines show great character and promise. If you like textural, terroir-driven white wines, this thoughtful producer’s estate is one to watch. Vale da Capucha Pynga Viosinho 2010 (VR Lisboa)
A little oily or terpenic on nose and palate which will divide tasters. It’s a little like Retsina on steroids, but in a good way – characterful, with good body/mouthfeel combined with the estate’s trademark freshness to the finish.

Vale da Capucha Pynga Selection 2010 (VR Lisboa)
I like this salty, piquant blend of Gouveio, Arinto and Antão Vaz. Lightly lemony with a subtly vegetal, succulent salt bush or samphire character it has a good acid backbone for length and structure.

Vale da Capucha Alvarinho 2012 (VR Lisboa)
Marques showed us three vintages of his Alvarinho. It was interesting to contrast the firm acid structure of this wine with the juicier fruitier acidity of Alvarinho from Vinho Verde’s granitic soils. In this vintage a bit more vine age (the vines were planted in 2007) gives a little more concentration to its cusp of ripeness pineapple fruit which helps better to balance the acidity. It’s a punchy, crisp Alvarinho, with chalky, mineral acidity.

Vale da Capucha Gouveio 2013 (VR Lisboa)
Marques particularly likes this grape for its subtle almost neutral character, even during fermentation he says. And I see the attraction – it puts the emphasis on the estate’s briny, salty, minerality, putting me in mind of eating goose barnacles. Again the acid is firm. It’s far from fruity but it does have a hint of gooseberry and peach on finish.

Vale da Capucha Arinto 2013 (VR Lisboa)
Arinto is renowned for its high natural acidity so you can imagine, at this estate, it’s on the high end of the high spectrum. In fact Marques plans to leave it in bottle for at least a year. I have to admit that I’m a bit of an acid freak so yes it’s young, but I very much liked the look of this firm austere, chalky, mineral, lemony wine. Once again, it seems very true to the estate.

Vale da Capucha Pygna Selection White 2012 (VR Lisboa)
A blend 70:20:10 blend of Viognier, Arinto and Fernão Pires. As you’d expect, the Viognier dominates the palate with fresh ginger and apricot fruit. Its spiciness is amplified by the Fernão Pires. The only problem is it’s a little short – perhaps more Arinto needed for persistence?

Vale da Capucha Fossil 2012 (VR Lisboa)
Me and a fair few fellow UK journalists have got a lot of time for this entry level wine. Oodles of character give plenty of bang for buck. A fleshy, creamy palate teased out by lemony acidity reveals white peach and, since I tasted it last year, more evolved (attractive) white asparagus. An undertow of minerality to the finish takes you back to the vineyard. Very good – á point.

Vale da Capucha Reserva 2011 (VR Lisboa)
Similarly this blend of 53% Viosinho, 31% Arinto and 16% Antão Vaz is evolving well with nice weight and layer to the palate and hints of white asparagus on a long, lingering finish. Cries out for fish or chicken and a creamy sauce. Lovely.

Vale da Capucha Tinto 2011 (VR Lisboa)
This 55:45 blend of Touriga Nacional and Tinta Roriz was foot-trodden in lagares and aged in used barrels. The Touriga gives floral lift – violets – to the nose which follow through on a plummy palate well framed by ripe but present chalky tannins and fresh acidity. Savoury oak lends a smoky, charcuterie note to the finish. For a wine which feels un-pushed and so defined it surprised me to learn that it weighs in at 15.3%! Marques explains he had to wait for the tannins to mature hence the high alcohol which he cleverly keeps in check by serving it around 14 degrees centigrade.

Vale da Capucha Late Harvest 2013 (VR Lisboa)
Marques showed us three vintages of this sweetie of which I liked this, the latest vintage, best. Unlike the others, it has a dash of Viognier to its Viosinho and Arinto fruit which seems to make the wine more complete – fleshier and longer with nicely integrated acidity to its toothsome buttered baked apple fruit.

This article is re-published with the kind permission of Blend, All About Wine