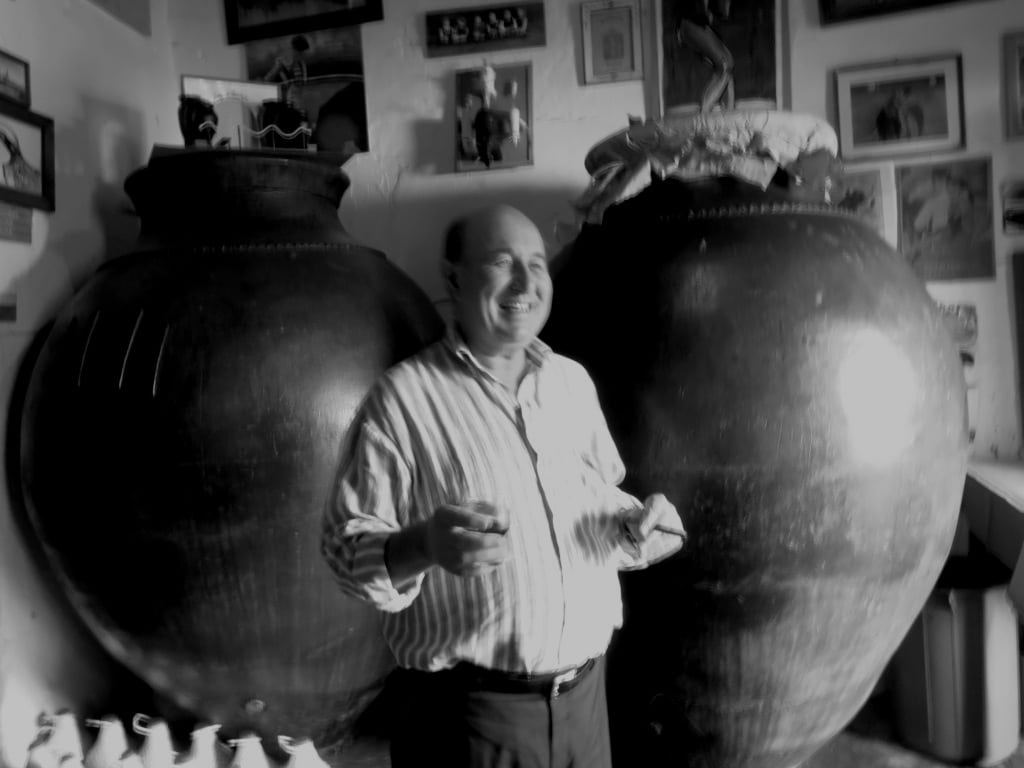 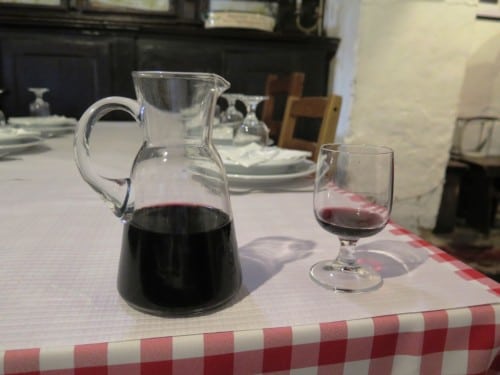 Real house wine – made on the premises at Adega Velha

Unimpressed by house wine?  Perhaps you’ve yet to experience the real thing.  I did on Friday. Wines made with intense love using Alentejo’s traditional talhas (clay pots) 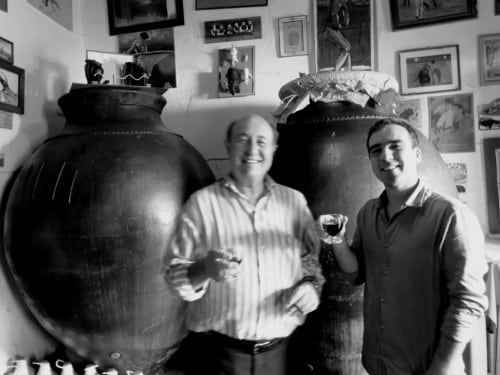 Adega Velha’s Joaquim Bacão (l) with his talha mentee, Herdade do Esporão’s Luis Patrão and 2 pots and glasses of wine

Robust but headily delicious, Eng. Joaquim Bacão’s talha reds are made by, for and at his tasca, Adega Velha in Mourão, Granja-Amareleja.  A place as heart-warming as the wine, the man and his passion for Alentejo’s tradition of talha. 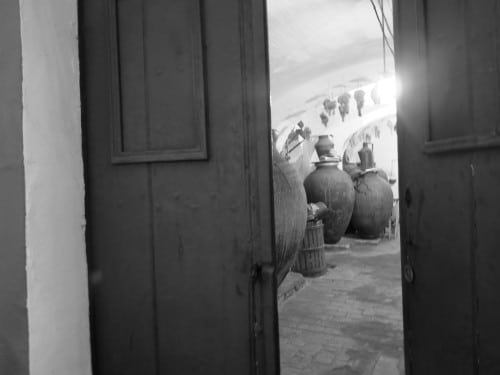 As for Professor Arlindo’s Ali Baba ‘cave’ of outsized clay pots (talha), the sweet, sustaining nectar quietly bubbling away in the cellar beneath his wife’s family home in Vila de Frades, Vidigueira, is for family and friends.  I suspect he has a lot of friends! 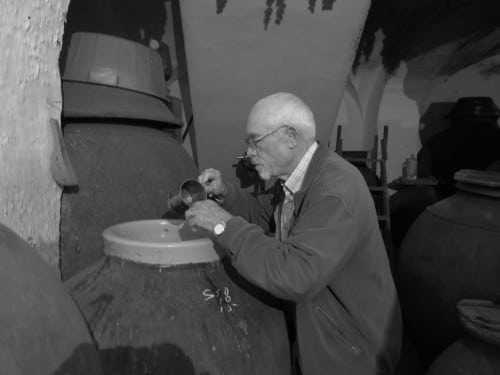 And a sneak peek of the wine

The retired school teacher has been making talha wine there since 1960.  He learned the art from his father-in-law who, prior to founding Vidigueira Co-Operative in 1963, made talha wines at the family cellar and 18 rented cellars in the region. 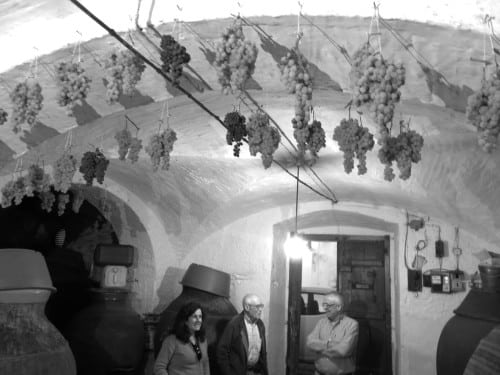 Swelling with pride at the memory, Arlindo recalled how João Portugal Ramos (who worked at the co-operative) told him he was lucky to have a father-in-law who could teach him so much. 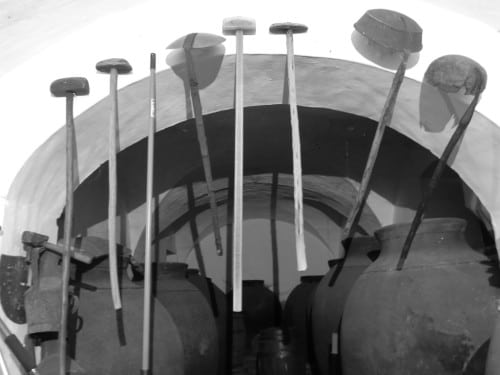 Tools of the trade: for punch downs and panning for gold, plus a mop, 3rd from left! 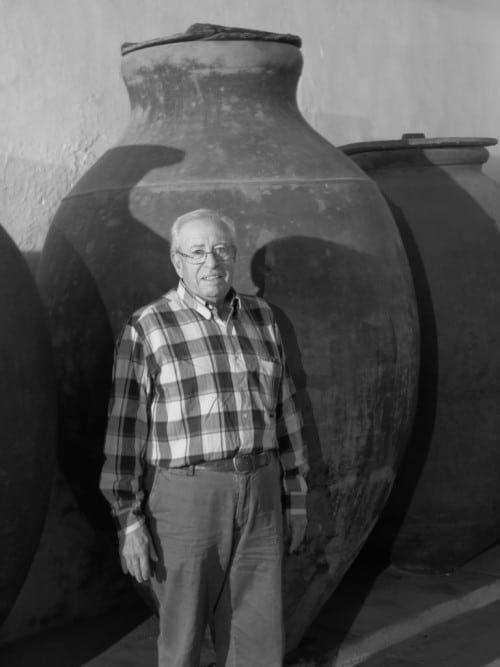 They may look big but, save for two, Coronel Galante de Carvalho’s talhas lie empty today – he sends 200 tonnes of grapes to the local co-operative.

I reckon it’s lucky for us too because the rise of Alentejo’s co-operatives in the 1950s and 1960s more or less dealt a death blow to this small batch, artisanal production method.   In fact it was a death blow to the art of making the pots themselves.  No-one is making them today and no-one knows for sure how they were made.

Built to cope with a boom in grape growing which resulted from a change in agricultural policy, the co-operatives dropped the traditional talha method altogether in favour of more efficient, less costly large concrete fermentation and storage vats.  Altogether!  I was surprised.  But casting his mind back to the 60s, Arlindo painted a vivid picture of Vidigueira’s streets flowing with grape must as car upon car of growers drove around desperately trying to off-load their grapes. 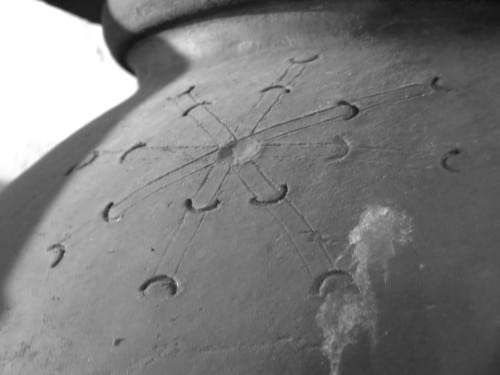 The pots themselves are beautiful, each bearing their craftsman’s name and mark, plus the date they were made.  Many of those I saw dated back to the 19th century; Arlindo even has talhas from the previous century when the house/cellar was built. 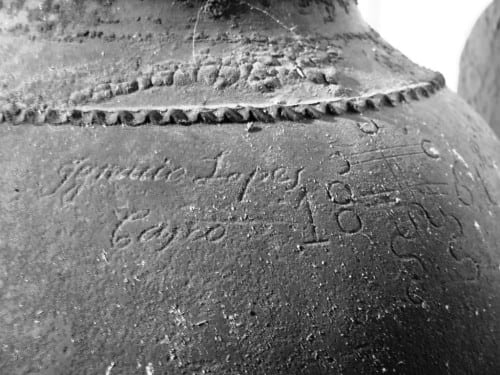 As you can see, some have been lovingly patched up over time. 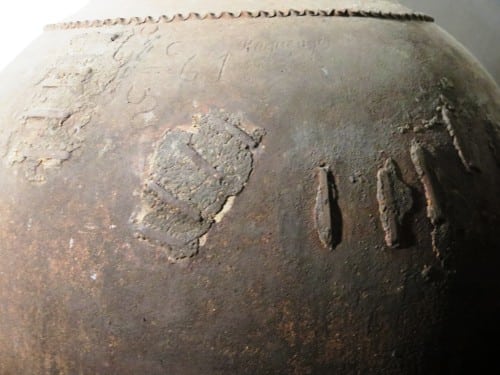 And along the way, some will almost certainly have been completely destroyed (exploded) by the build up of carbon dioxide during the fermentation process.  It’s why the cellars I visited have a handy drainage hole in the floor!  It also explains why both red and white talha wines are foot-trodden and crushed prior to being fermented on skins and stems – it helps to reduce this build up.

Once fermented and drained off the skins and stems (which handily act as a filter), the wines are sealed with olive oil and decanted for drinking from the base of the talha.  These wines were not traditionally bottled; the longer they spend in talha, the more oxidised the wine becomes. 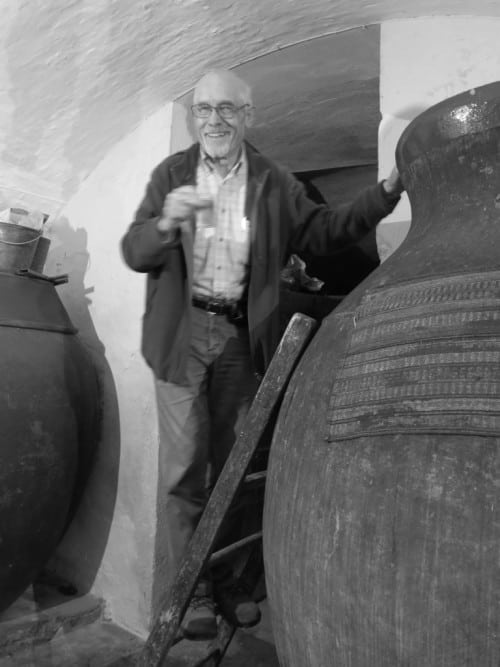 I had a sneak peek of Arlindo’s 2015 white wine direct from the talha.  Made from Antão Vaz (Vidigueira’s traditional flagship variety) it was honeyed and yielding on the attack, very sweetly scented, with the texture and flavour of gently pithy, spicy citrus peel going through.  With effortless balance and clarity of expression, it charmed me as much as its twinkling-eyed maker.

In Granja-Amareleja, Moreto is the signature grape.  As you might expect from this hot, dry region bordering Spain, the tradition is for full-bodied, high alcohol wines with stonking fruit.  Think sweet plum, dried plum and dried fig.   Bacão’s wine is true to form – heady and sweet. 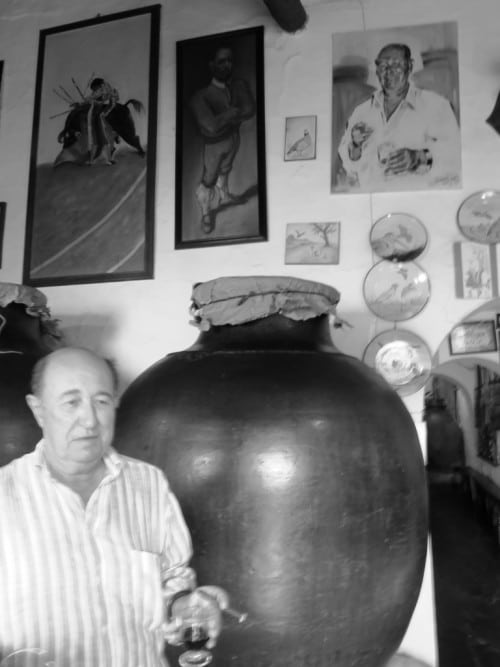 Beckoning me to the bar, the cigar and wine quaffing bon viveur (the Terence Conran of the Alentejo?) introduced me to another pot (number four) from this year’s vintage.  It’s a touch lighter-bodied, delicious too.  Doubtless thanks to the skin and stem contact, both have the balance to work well with Adega Velha’s hearty local meat dishes.  Or my tagine-like chickpea stew with a smidge of Bacão’s scorchingly hot homemade chilli condiment! 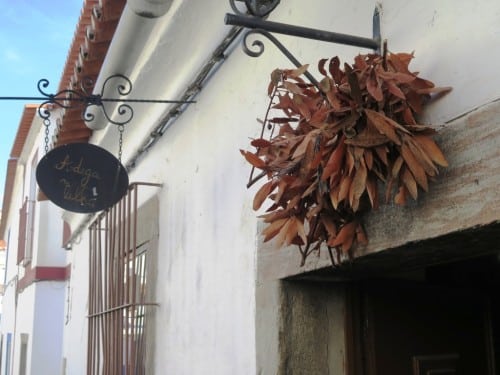 On Wednesday, St Martin’s day, the first keenly anticipated wines of this vintage (2015) will be tasted with great ceremony – I shall definitely make sure I visit on 11 November next time!   Make it a date for your diary too.  I reckon you should most definitely tuck your feet under the table when drinking real house wine! 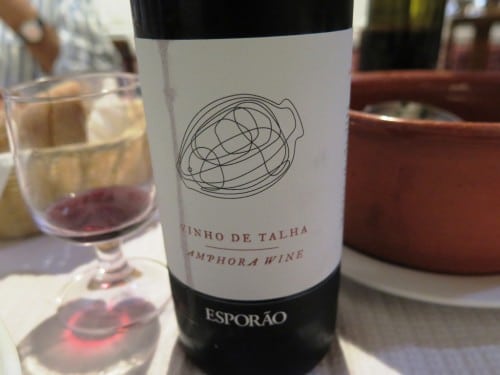 In part 2, I’ll focus on new wave DOC Talha wines which are being fermented and aged in talha, then bottled (which preserves freshness) by modern, full-time players like Herdade do Esporão.  Its red winemaker Luis Patrão is clearly having a ball being mentored by Bacão, while Bacão blinked back the emotion when I asked how important it was for newcomers to carry the torch for talha.  Silly question….

Click here for a report on more feats of clay from around the world.