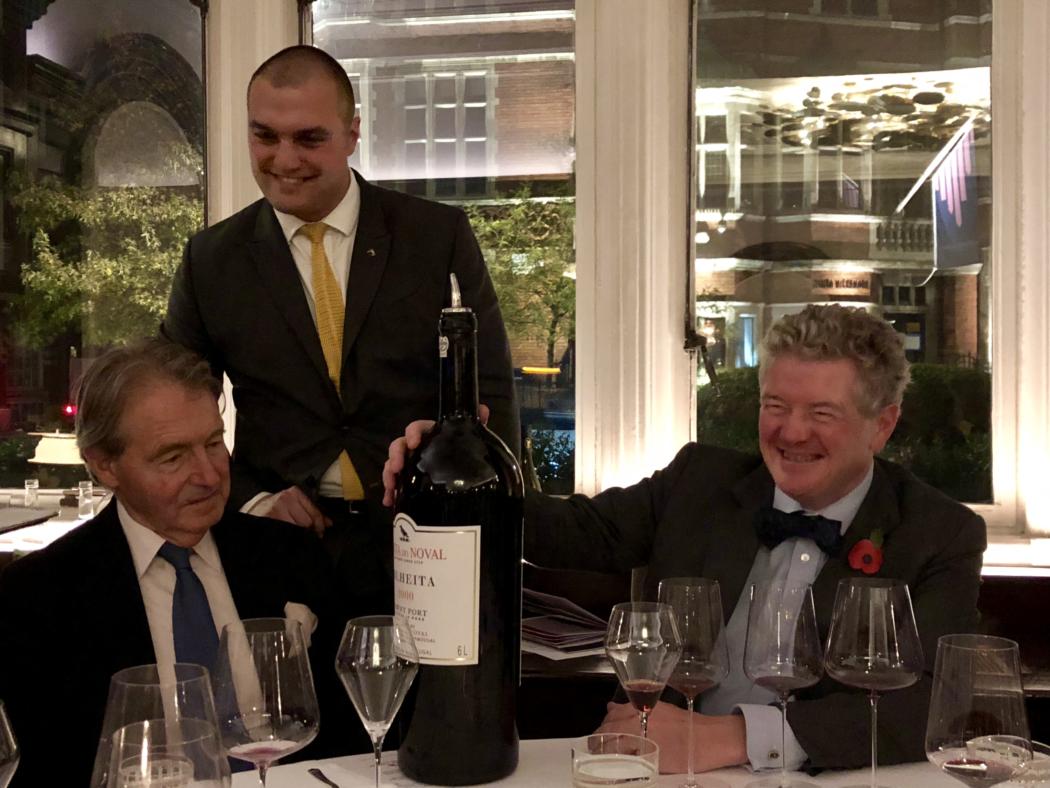 The Quinta do Noval Collection at Selfridges & The Connaught 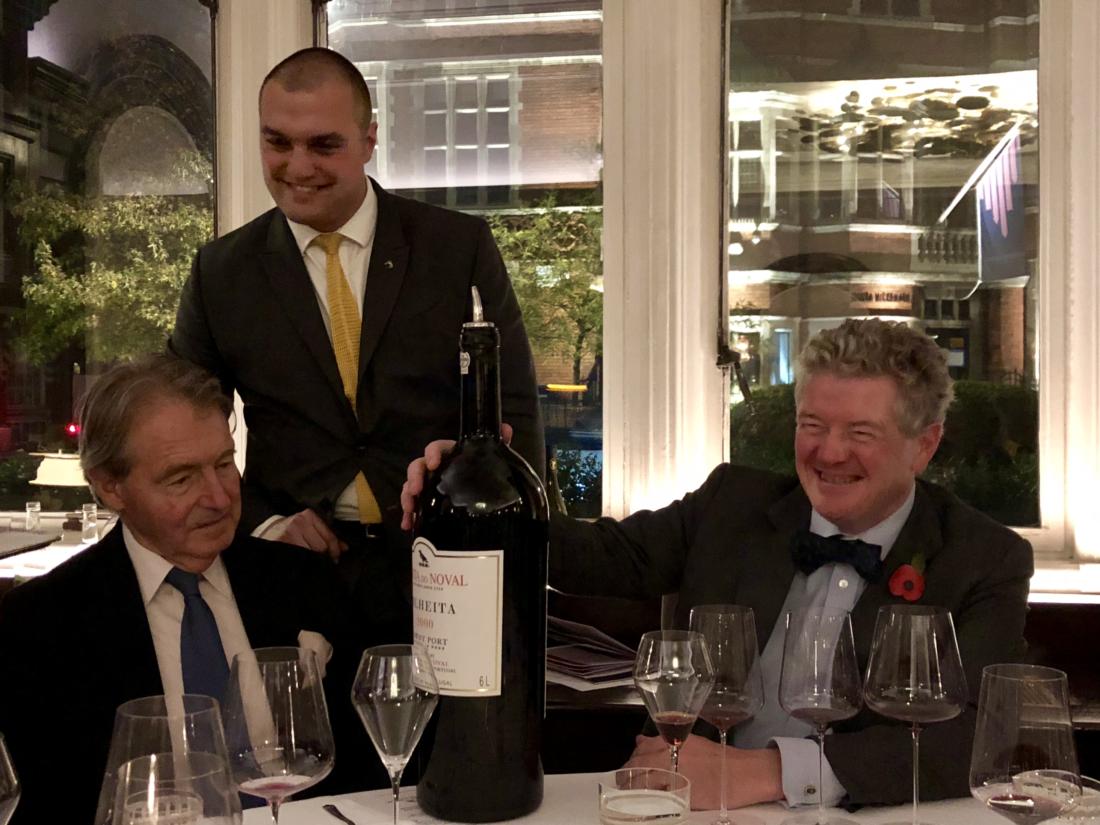 I attended a special tasting of five decades of Quinta do Noval Vintage and Colheita Ports on the first of November, all of which are now stocked by Selfridges and listed at the two Michelin star Hélène Darroze at The Connaught restaurant.

Stretching back to 1927 for the Vintage Ports and 1937 for the Colheitas, The Connaught collection of 26 Ports is especially eye- popping.  Although it does not include Quinta do Noval Vintage Nacional 1931, it was mentioned that this legendary vintage was the most expensive bottle of Port ever sold.  An auction record smashed many times over just four days later, on 5th Novenber, when one of five bespoke Lalique bottlings of Niepoort Garrafeira Vintage Port 1863 sold for over 100,000 euros (I’ll post my tasting note on this wine on Wednesday).

Special Port bottlings, typically Very Old Tawnies, have taken off since Taylor’s launched Scion Very Old Tawny Port in 2010.  I asked Seely if Noval planned to follow suit, but he made it abundantly clear that he will not be exploring this avenue.  In comparison with these special bottlings, ‘regular’ bottles of Vintage Port – even Noval Nacional, which commands top dollar – can seem strikingly good value.  The trouble is, older bottles in good condition can be hard to find.

So it is great news for Port fans that Quinta do Noval has released some spectacular, mature Vintage Ports and Colheita Tawny Ports from its cellar stock to The Connaught and Selfridges.    I’ve listed them at the foot of this post, together with Selfridges’ prices and details of a special, free engraving service for Noval Vintage and Colheita Ports (a special bottling in a different way).

It’s a smart idea for Christmas or anniversary gifts where, as aficionados know, Noval declared vintages in years when most did not.  Indeed, as Managing Director Christian Seely observed, “recently we have become more eccentric than ever before, declaring every year since 2011” (although all the Nacionals shown were from classic years). 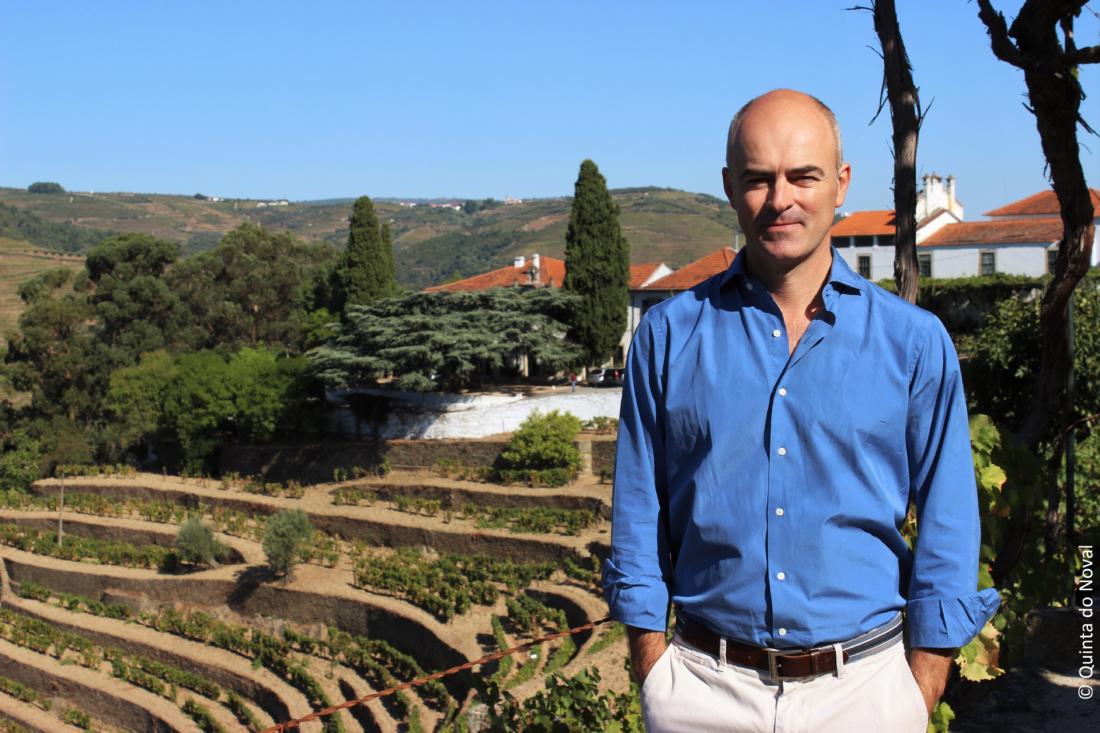 Aside from highlighting these new key listings, Seely took the opportunity to introduce Quinta do Noval’s new Technical Director, Carlos Agrellos.  Agrellos takes over from his uncle, Antonio Agrellos, who will consult.  Big boots to fill.  Agrellos senior worked alongside Seely for 25 years, during which time owners AXA Millesimes have, to great acclaim, restored the vineyard and reputation of the estate which had taken a dip in the 1980s.  Reassuringly, Carlos’ uncle suggested that he succeed him.  Like his uncle before him, he will also consult at Seely’s own estate, Quinta da Romaneira.

I’d met Carlos before, tasting the wines he made at his family’s Douro estate, Durham- Agrellos,  Having bottled them at Noval since 2004 and worked alongside his uncle for three years, Noval’s new Technical Director seems to be taking the new role in his stride. He is, he pointed out, Douro born and bred and, previously, worked for the Symingtons, at Quinta de Cotto, then Amorim (as an international account manager), before returning to making wine at Durham-Agrellos (where he will continue to make the wine).

Over dinner, we chatted about the 2018 vintage.  He reported that the wines are a very deep colour already with an impressive aroma, extraordinary balance and lovely acidity.  Both Ports and Douro DOC wines look very good.  He would compare the year to 2007, a generally declared year.  Expect an unbroken record of declarations then (though see Seely’s comments below about 2007 and Nacional).

I wrote up this Port following the London launch in May here, where you can find background notes on the vintage and winemaking.  Looking very 2016 – the nose is pure fruited and fresh, showing sweet dark berry fruit and ripe blackcurrant, with a hint of mint.  In the mouth juicy blackberry, succulent cherry and slippery plum skin fruit is laced with liquorice spice.  Lovely freshness and poise going through.  As it opens up, orange blossom notes.   Finishes dry and mineral, with mouthcoating, very fine graphite tannins, liquorice and spice.

I wrote up this Port following its launch in June last year here, where you can find background notes on the vintage and winemaking. Seely confessed he was “very surprised” so few declared Vintage Ports in this year (Noval made 6,000 cases of the 2016 and 3,000 cases of 2015, versus around 1200 cases in 2012, 2013 & 2014, which fit into the “eccentric” category, hence the smaller volumes).  It has a little less intensity of colour than the 2016 and seems wilder, fleshier and more savoury than the pure and poised 2016, with lashings of liquorice to its slippery, juicy plum and berry fruit.  A raft of sinewy, savoury, touch sooty tannins bringing peppery grip to the finish.  Incidentally, I asked Seely if he had any more secret Nacionals up his sleeve (the 2004, reviewed here, was only recently released).  It would seem 2015 is a favourite year, so let’s see….

Good depth of colour still.  A jammier, darker nose, with esteva and broom.  Very savoury and broad-shouldered, with liquorice and dense fruit, red and black, some fruitcake, the tannins chewier, with a hint of cheroot.  So far, so burly, showing the heat of an extremely hot period during August, when temperatures exceeded 40 degrees.   And then, like a second wind, a cut of acidity propels the palate along.  There’s juice and a lively peppery riff, making for a lingering finish with mouthcoating, spicy tannins, esteva and eucalypt, the esteva pronounced going back at the end.

Poor flowering resulted in a small, high quality crop.  The harvest began on 24 September, ending on 9 October under perfect hot, largely dry weather.  Seely described the 2000 as very backward from the off.  And still, he added.  Quite sulky initially, with a touch of bottle stink, so it seems a little hot.  But like the 2003, it then switches gear, building and arching dynamically, with a long throw palate, foot firmly on the gas.  Wild flavours abound on a super complex palate with coffee, smoky, cured leather and blackstrap liquorice, well supported by sooty, mineral, powdery, mouthcoating tannins.  Ever so long and sturdy.  Terrific.  Surely a long life ahead.

No rain from April to September resulted in low yields of small berries, rich in sugar and tannins.  Quinta do Noval 1966 is a pale reddish, bricky hue.  Smooth on entry, initially with an almost tawny-like nuttiness, dried fruits, a lick of plum jam, cafe creme and a touch of warmth.   Noval’s signature smokiness and liquorice – perfumed and pronounced – is much in evidence.  Esteva too.  Building in the mouth, still with energy and grip, it put me in mind of the 2000.  Very long, with a lifted, resonant finish.  Going back after the Colheitas, it has a chinato vinosity. Very fine indeed.

I wrote up this Port, which is sourced from a famously ungrafted distinctive 1.6ha parcel, following the London launch in May here, where you can find background notes on the vintage and winemaking.  Seely observed of Nacional,  “it’s always extremely different if not necessarily better,” 2007 (a generally declared year) being a case in point.  Nacional was not bottled, though Seely revealed that, in recent years, Nacional wines are no longer blended away.  Kept separately in barrel, the 2007 may be bottled as a colheita, he said.  Conversely, in 1996, Noval bottled just Nacional and a Late Bottled Vintage Port. On this showing (and following on from mature wines), I was so besotted by its top notes – lively riffs of black pepper and fragrant orange blossom (much more pronounced than in May), that I have omitted to note down anything else about this wine, save that it was deeply impressive!

The 2003 could not be more different.  It’s a deep hue, with a slatey, mineral glancing quality to the nose and an intriguing greeness/olive oil grassiness.  In the mouth, all bitter chocolate, with rugged, mineral tannins and a chewy finish.  Vigorous, unevolved almost, it’s bit of a bruiser.  Impressive structure.  Needs time. 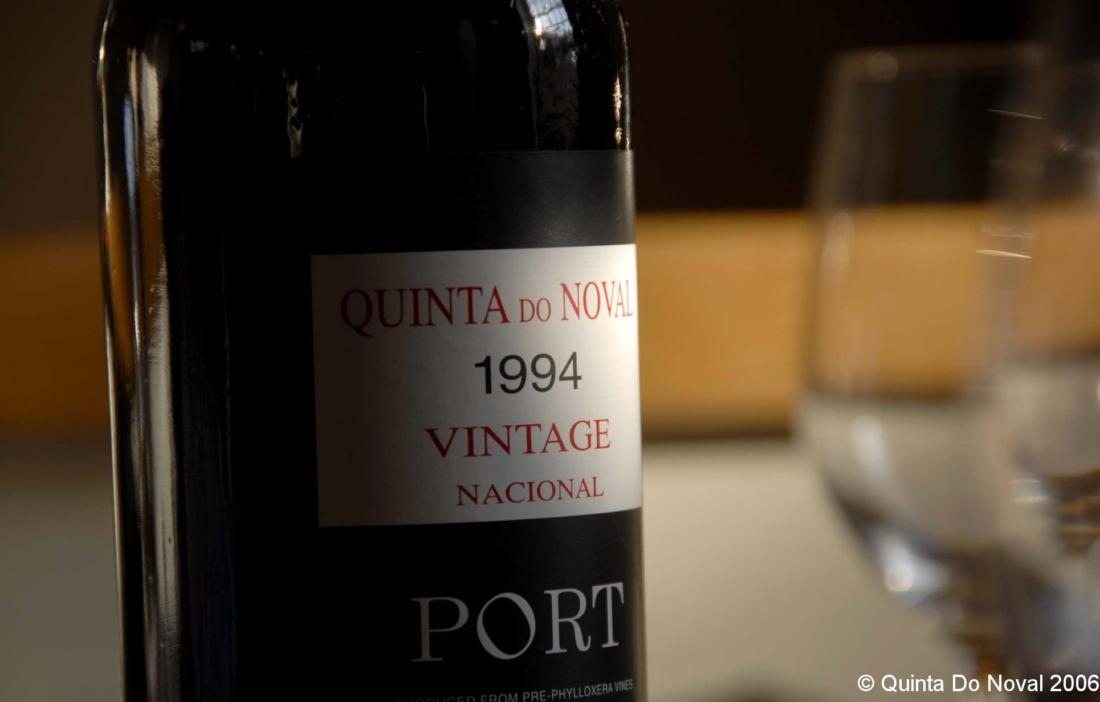 An oustanding, generally declared vintage with sunny days and cool nights.  Musts showed exceptional quality with excellent floral aromas and rich, deep purple colour.  Markedly savoury, with a velvety, intensely liquoricy, chocolatey palate, it has a rich bottomless pit of prunes and some spiritty warmth.  A hug of a wine.  Deep, a little salty, with esteva and eucalypt.  Though I found the flavour profile more developed and savoury than I expected, structurally, it seemed young, with a terrific sense of dry extract.  Over dinner, we had the opportunity to taste another bottle, which showed brighter, more opulent fruit.  Lovely richness and balance, with the under-pinning to go long haul. Decadent.

All the Colheitas were bottled this year.  Seely observed that barrels are rigorously topped up to “keep our wines younger.”

Seely noted that Noval will release the 2005 which, he reckons, “may be best of bunch” in January (I love Niepoort’s 2005 Colheita, so I’m excited to taste the Noval).

Still a ruddy hue with a rich, ripe nose.  In the mouth it has plenty of oomph, gamely aided and abetted by a whoosh of spirit.  A dense Colheita, still very young, with smoked hazelnut, liquorice and a touch of black banana to its dried fruits.

Good spring flowering and vegetal growth.  The strong rainfall in June and early July was followed by a dry summer with high temperatures, making for a compact vintage.  Average production, excellent quality.  This is showing very well now.  Again, plenty of power – that spirity oomph – with layers of smoky, salted almonds, salt caramel and esteva to its dried fig palate.  Again, a touch of ripe, baked banana.  Long, warm and very satisfying, with plenty of power and resonance.  I love this Colheita’s smokiness and saltiness.

Following the driest winter on record, there was total drought throughout the summer until the end of August.  Production was very low and the Ports were exceptionally concentrated and full-bodied.  With another twenty years in wood, the 1976 has an enticing, mouthwatering touch of ‘vinagrinho’ lift, which sucks you in and makes for a seemingly drier, more sculpted, pacy Colheita.  A swooping, seductive palate cut with grapefruity acidity runs away with you, revealing layers of orange peel, roasted almonds and liquorice to its dried fig and vine fruits.  A hint of dusty wood does not detract from the overall enjoyment of this superb Colheita.

A good winter was followed by good weather in the spring.  The summer was hot and dry with practically no rain till September.  Rain was then welcomed.  The 1937 Colheita is a deep mahogany hue, with waxy marzipan and panforte dried fruits, studded with whole blanched almonds and orange peel.  Rich, very intense and compelling, with a mellifluous, exceptionally long, superbly balanced finish.  Doesn’t miss a beat, but skips your heart a beat or two.  Outstanding.  An elegant Colheita in terrific condition.

The Quinta do Noval Collection at Selfridges

Every Thursday and Friday from 29 November to 14 December, Selfridges will be offering a free glass engraving service to personalise Vintage and Colheita bottles.

The Quinta do Noval Collection at The Connaught

This selection of 26 Noval Ports is the country’s, pehaps Europe’s, best selection.  Some are available by the glass.  It comprises: