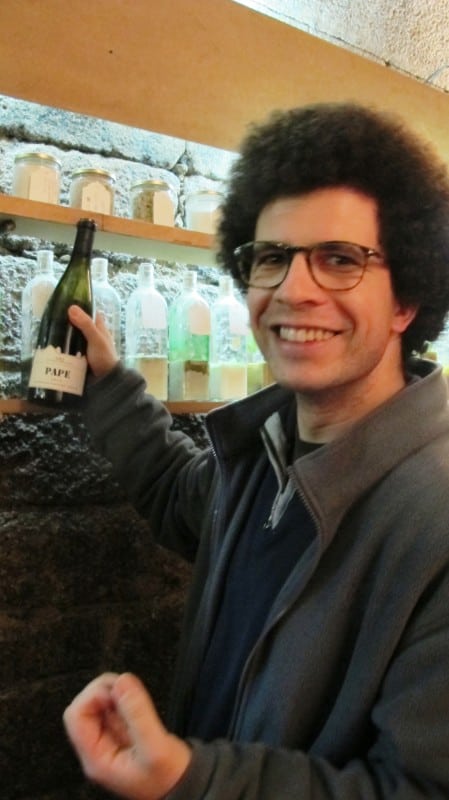 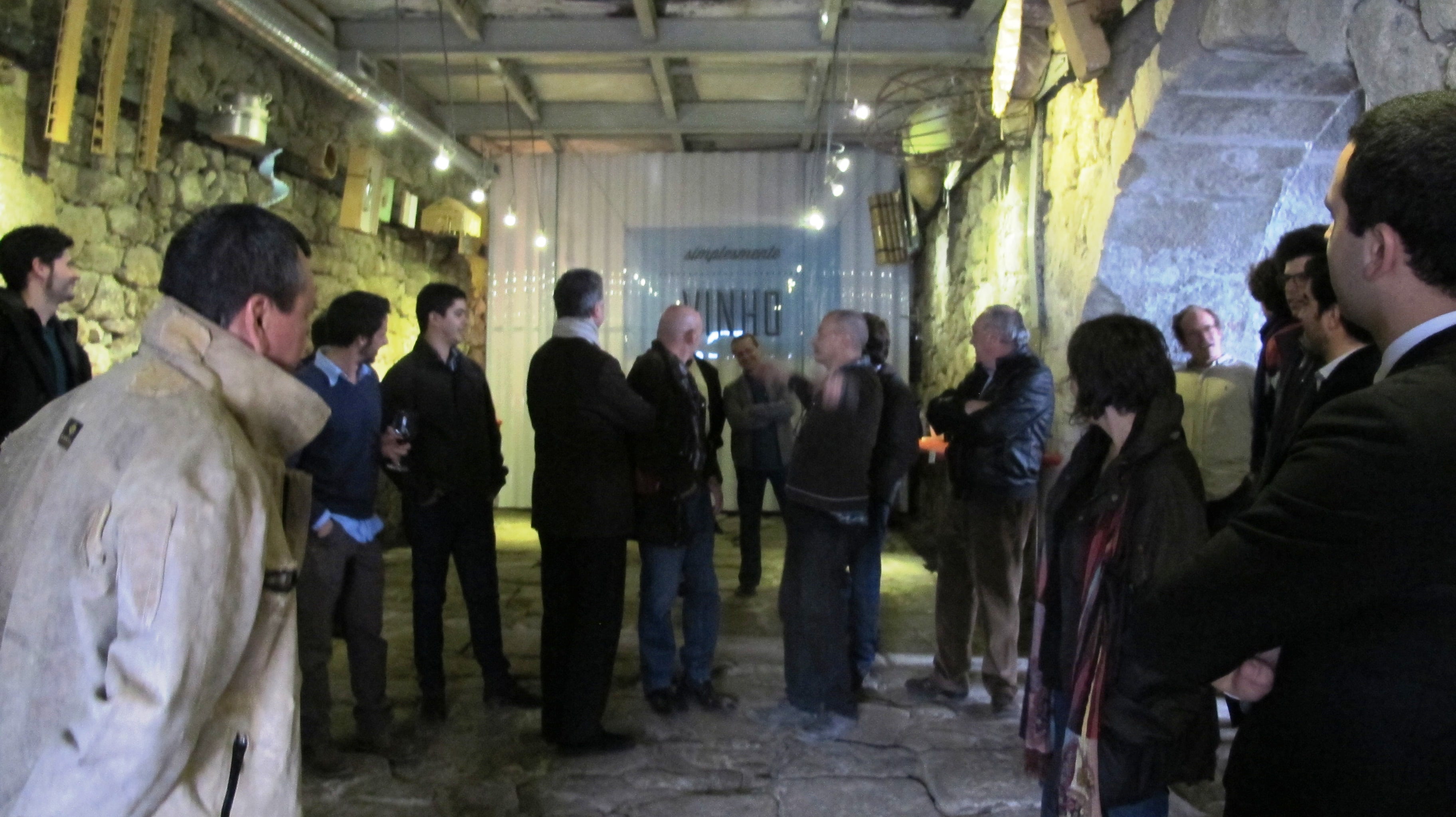 All eyes on Simplesmente Vimho 2014: João Roseira introduces the growers

You have to put Portugal into the glass [i.e. get it in front of people] because it’s not in people’s heads. People don’t think of Portugal as a wine producing country.

This is, pretty much verbatim, an exchange I recently overheard between a consumer (who happened to be a marketing man) and a Portuguese producer at Decanter’s Iberian Encounter tasting.

Though I think Portuguese wines are slowly but surely starting to make a bigger impression on keener members of the wine drinking public, it is a pretty fair assessment. 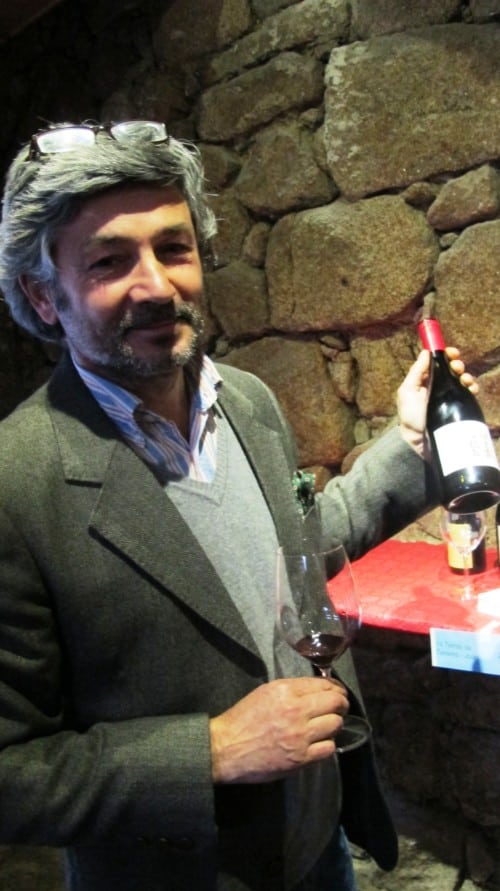 Of course getting your wines in front of consumers is particularly tough for smaller producers who have tiny marketing budgets and a limit to how much wine (or time) they can divert to marketing activities.

And if those wines are as delightfully individual as some I tasted at Simplesmente Vinho last Friday, there’s no doubt that it helps to meet the producer and get a bit of back story. 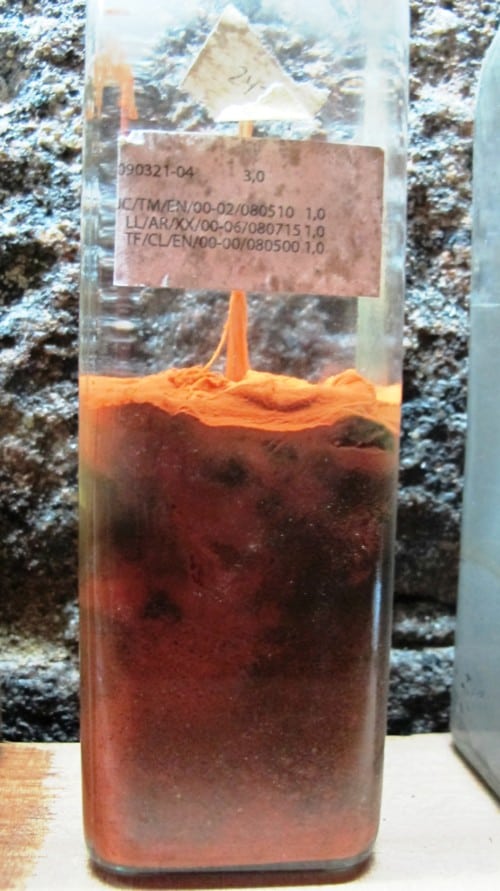 Some strange drops at Skrei – the Oporto venue for Simplesmente Vinho

So I am very glad indeed that Simplesmente Vinho has entered into its second year, not least because it meant I got to visit this Oporto wine fair devised by small producers for small producers.

Pictured/written up below are my highlights, including some exciting new discoveries! The fair, which founders João Roseiro and Mateus Nicolau de Almeida describe as an “off salon” (I much prefer ON salon!) takes place at the same time as Essencia de Vinho’s much bigger, well-established wine fair. Both are open to all so, at this time of year, I encourage wine lovers to beat a path to Portugal’s wine capital, Oporto. 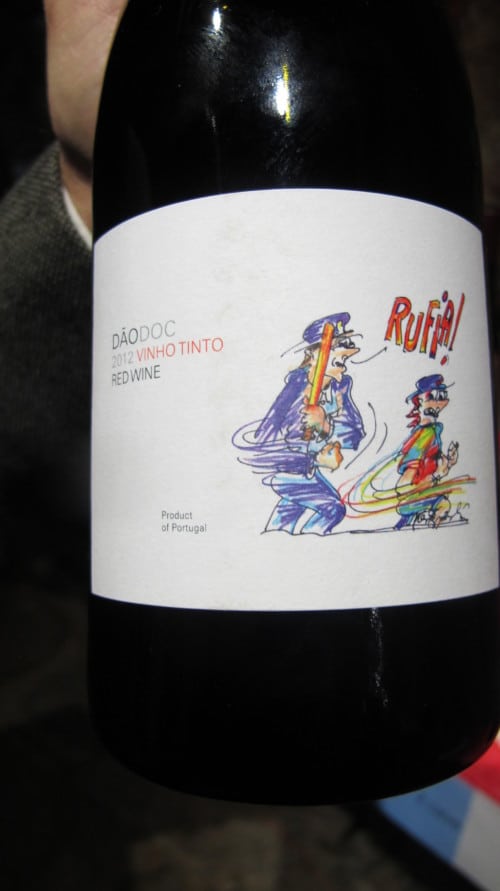 I particularly enjoyed two wines from Terra de Tavares in the Dão. Terra de Tavares Rufia 2012 (Dão) is João Tavares de Pina’s first vintage of this co-fermented unoaked blend of Touriga Nacional, Jaen and Tinta Pinheira (Rufete). It was aged on lies for around 15 months with no racking or sulphur additions until bottling (and minimal sulphur on bottliing). It’s as bright as a button with lovely florality (violets and roses), fresh, crunchy red and black fruits and a salty minerality. Tres soifable. 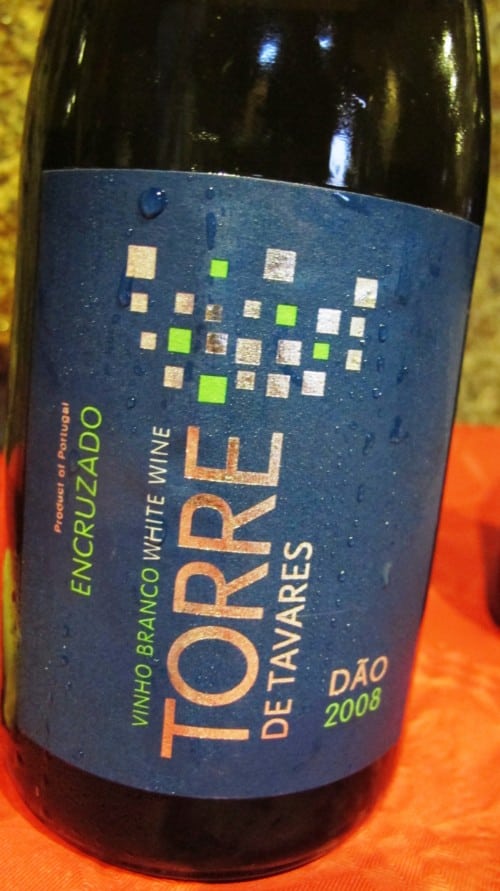 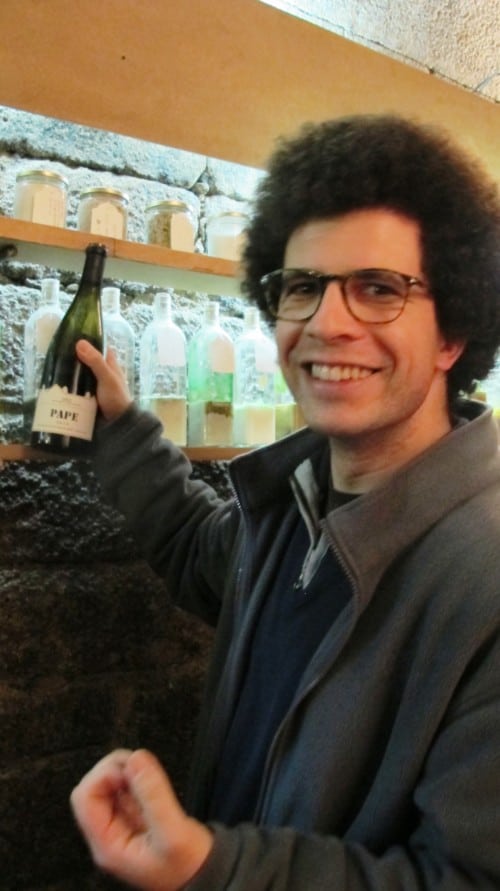 As always there was plenty to pique the palate at Alvaro Castro’s table, including Alvaro Castro Pape 2010 (Dão) which was extremely well received at a tasting I presented in London last week. But the selection below caught my eye – Castro’s “new” teeny tiny limited edition old vine single parcel wines. The grapes for Alvaro Castro Alva 2011 (Dão) – all 400kg of them – come from old vines in front of Castro’s house. It’s a very spicy wine with green and white peppercorn lift to its tightly furled red fruits. 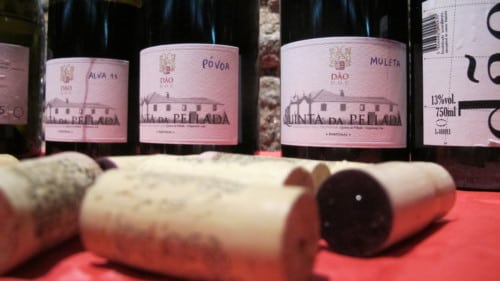 Alvaro Castro Póvoa 2011 (Dão) is from an 80 year old field blend parcel (this one bought in fruit) which includes Jaen, Baga and Touriga Nacional. Like the Alva, just one barrel was made. It has a lovely sweetness to its slippery damson and black plum fruit with a hint of sloe gin. Fine ripe powdery tannins anchor the flavours.

My pick of the bunch is Alvaro Castro Muleta 2011 (Dão), so-called because muleta means walking stick and the plus 100 year old vines from which this wine is sourced are propped up with sticks! It is much firmer, more sinewy than Alva or Póvoa, with a grip of tannin behind its bright seam of red fruits. Lovely freshness and minerality, with terrific length and intensity. 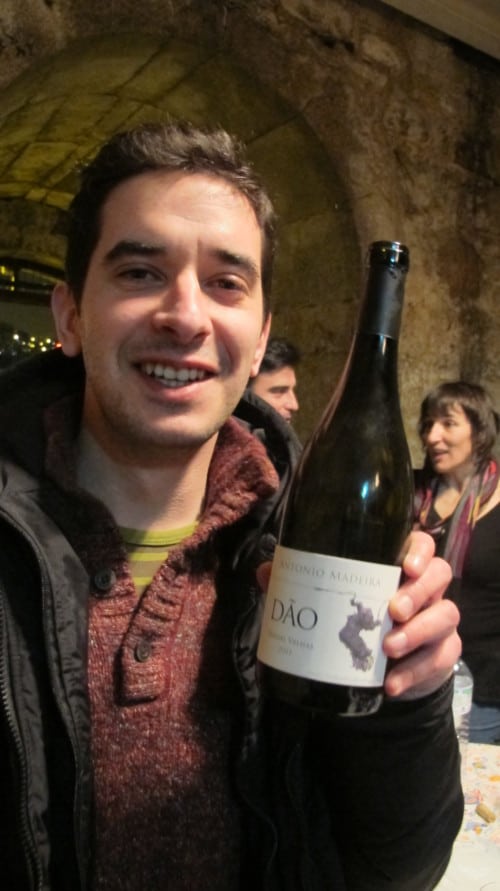 Antonio Madeira with his first release

Antonio Madeira’s day job is engineering. Based in Paris but from Dão stock he is intent on uncovering the region’s Grand Cru sites and his blog features some great photos of those sites with which he is working (renting). Judging by his first wine (which he made at Alvaro Castro’s cellar) he is on the right path. Antonio Madeira Vinhas Velhas Tinto 2011 (Dão) is from a 50 year old field blend vineyard at 450m in the Serra da Estrela which had been abandoned. Vinified as naturally as possible to preserve its character (wild ferment, gently foot-trodden, aged in used barrels) it’s an exceptionally mineral wine with lovely freshness, fluidity and persistence to its restrained red and black fruits.

Artist Marta Soares took over winemaking duties at Casal Figueria following her husband, Antonio’s death and remains true to his ideals, fashioning wines which articulate vineyard and variety most clearly and yet mysteriously. These are mutable wines which grow in the glass and draw you back to it. Stony, salty and nutty layers build and soon overtake the classy veneer of French oak which asserts itself on the nose and attack of Casal Figueria Antonio Vital 2012 (Lisboa). An expansive, textural yet fresh white, the 2010 of which was in fine form at UK importer Raymond Reynold’s tatsing yesterday (still building!) 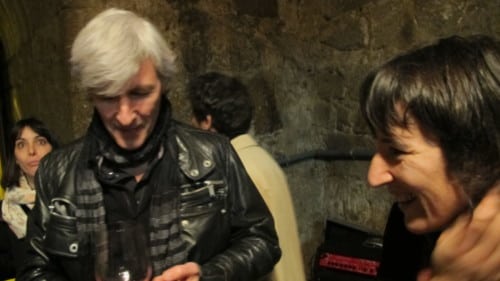 And new from Soares is Casal Figueria Castelão 2013 (Lisboa) which she dubs her “Vin de Nuit” for its short maceration. It’s an uncommonly fresh, sappy style of Castelão with bright raspberry, blackberry and apple fruit. Lots of easy charm.

It’s the Annual Wines of Portugal tasting today. Last year one of my finds was Vinibio Mica 2012 Vinho Verde, reviewed here. The ’12 is still in sabre-rattling energetic form while Vinibio Mica 2013 (Vinho Verde) is a tightly focused melange of minerals and lime. Very good and, I hadn’t realised, made by Fernando Paiva of Quinta da Palmirinha. 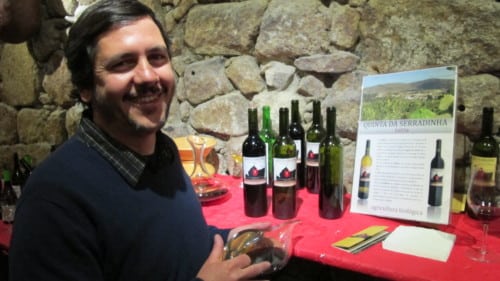 I had no expectation of finding Baga in Lisboa but António Marques-da-Cruz of Quinta da Serradinha makes great use of it in his blends. And it makes sense where, like Bairrada, his maritime vineyard (25km from the coast) features chalky clay soils. Quinta da Serradinha Red 2009 (Lisboa) is sourced from aged organically cultivated vines planted in 1954. It features 30% Touriga Nacional, 30% Castelão, 20% Alfrocheiro and 20% other traditional field blend varieties (including Baga). It’s a spicy, firm, fresh, wild and unreconstructed wine of good stature/structure. I liked it very much. Quinta da Serradinha Red 2010 (Lisboa) features 25% Baga and shows powerful ripe but fresh, tight blueberry and blackberry fruit with a wild, smoky charcuterie edge (Baga on chalky clay) and bitter chocolate. It is well supported by suave tannins. A 1999 red with a gloriously honeyed, wild blueberry nose retains great presence and structure, which bodes well for the potential of the 2009 and 2010.

Quinta da Serradinha White 2010 (Lisboa) is a blend of 85% Encruzado and 15% Bical from a relatively young vineyard planted in 1995. After 24 hours of skin contact (with foot-treading) this unfiltered wine was fermented and aged in used oak barrels. It’s a tight, toasty, flinty wine with good energy and persistent citrussy acidity. Well done. 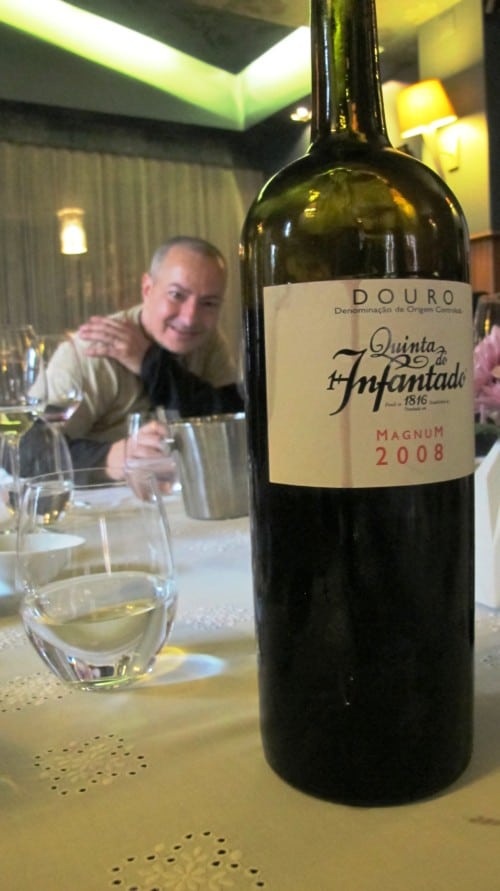 The last line goes to Quinta do Infantado Tinto 2008 (Douro), which comes from the estate of one of Simplesmente Vinho’s founders, João Roseiro, pictured. Roseiro says, in 30 years, save for this vintage, he has never been able to make a wine without acid addition. From magnum this is a very classically hewn, dry, fresh red of grace and stature. Its restrained, fresh blackcurrant, leaf and cedar notes put me in mind of Bordeaux, as does its powder fine charge of tannins. Juicy black plum fleshes out the middle palate without losing precision or line. A very persistent, elegant Douro red.