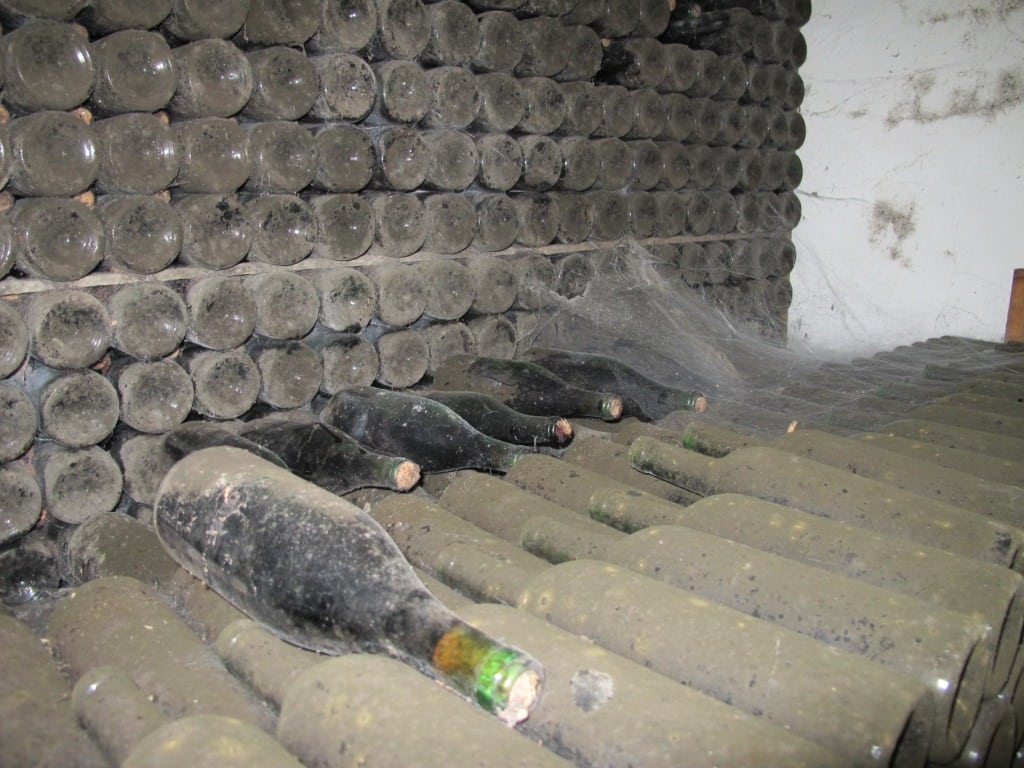 A cellar stuffed to the gills with over a million bottles dating from 1959 to 2000 might sound sexy.  Well might you ask which obsessive collector lies behind (or lives above) this bottled lake of wine?  Brandies from the 1960s to the 1980s too – the current release is the 1966!  In fact these dust-coated, cobweb draped bottles have never been moved or, at least, never traded.  The cellar belongs to Caves São João, a third generation Bairrada-based wine producer founded in 1920.

So why the lake?  The company has, after all, operated continuously for almost a  century.  I asked Maria de Fátima Costa who showed me around the cellars when I first visited last year.  The retired teacher’s grandfather and his two brothers founded the business and her father was the company oenologist.  She jokes of the second generation who ran the business for many years, “they didn’t like to sell wines…it was as if they were their children.”

But the truth is perhaps a reflection of a difficult period in the Portuguese wine industry. It is surely no coincidence that Caves São João’s museum stock started to pile up in the 1950s when Portugal’s colonies  – the country’s traditional export market – gained independence.  The company was one of five local negociants whose vast melting pots had serviced this bulk wine market and, says Costa, although Caves São João had by then launched two very successful (bottled, not bulk) brands – Frei João (DOC Bairrada) and Porta dos Cavaleiro (DOC Dão) – the intricacies of negotiating new, arms length export markets were beyond it. 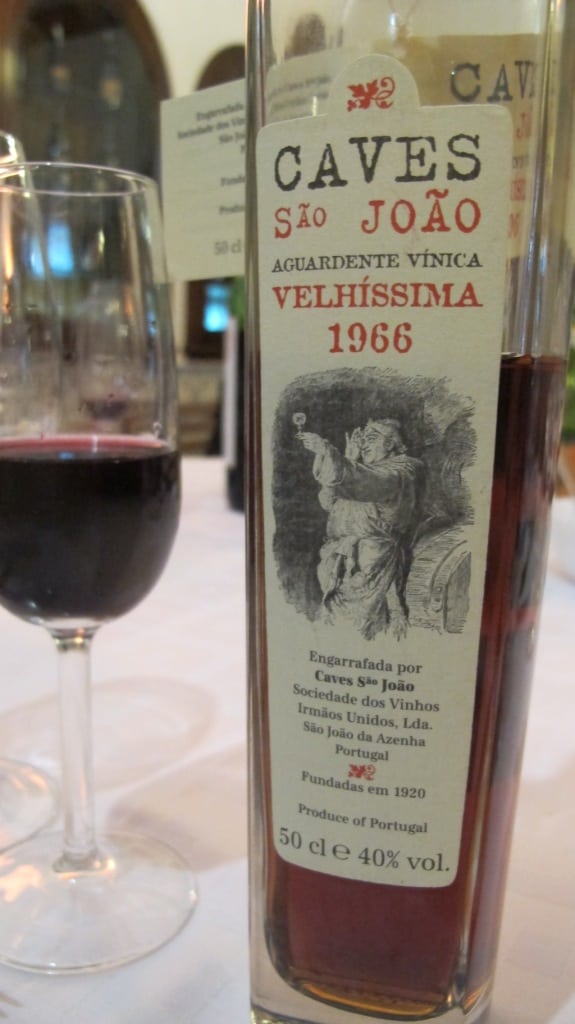 The good news is that this hoard of museum stock is transitioning from liability to asset where Caves São João is now actively promoting its sale.  According to Costa, it has become fashionable in Portugal to drink older wines – a process which she brilliantly likens to “driving an old Cadillac.”  Though I cannot say I have driven an old Cadillac I well remember switching my edgier, demanding Alfa Romeo Spider for the (much more) reliable Vorsprung durch Technik precision of an Audi. 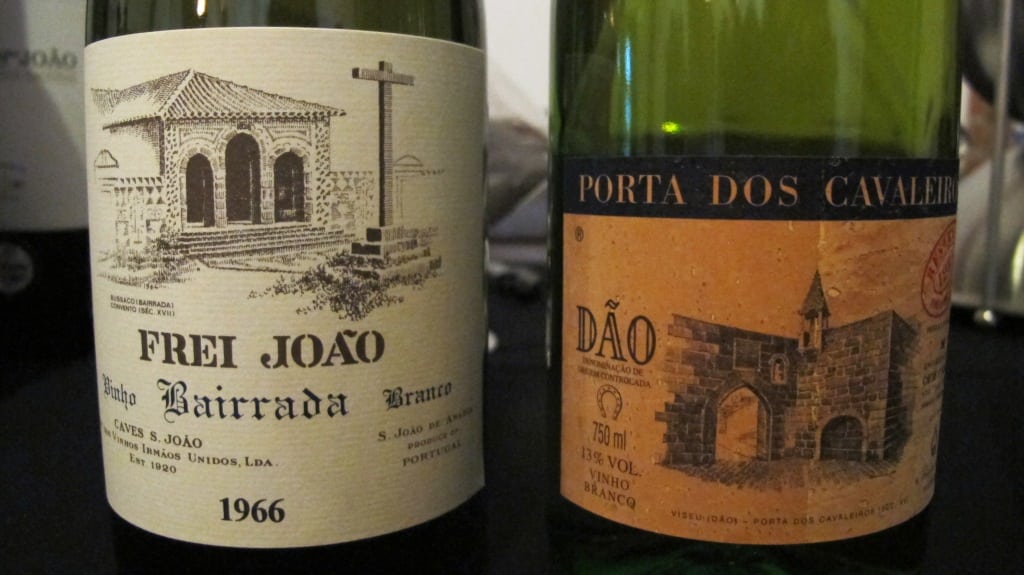 Also playing into Caves São João’s hands is former elBulli sommelier Ferrán Centelles’ observation about the versatility of aged wines for food pairing (Centelles was speaking at last week’s Port Wine Day seminar on the future of food and wine matching).   Certainly on my second visit this year my charges – ViniPortugal Wine Quest sommeliers – were quick to flash the cash and take advantage of the museum stock available for purchase at Caves São João’s cellar door!   One bottle of which, I might add, helped whisk Wine Quest’s Sommelier Champion Dorian Guillon to success when he impressed me and my fellow judges with an inspired pairing of Caves São João Porta dos Cavaleiros White 1985 and smoked lobster simply dressed with olive oil, salt and pepper. 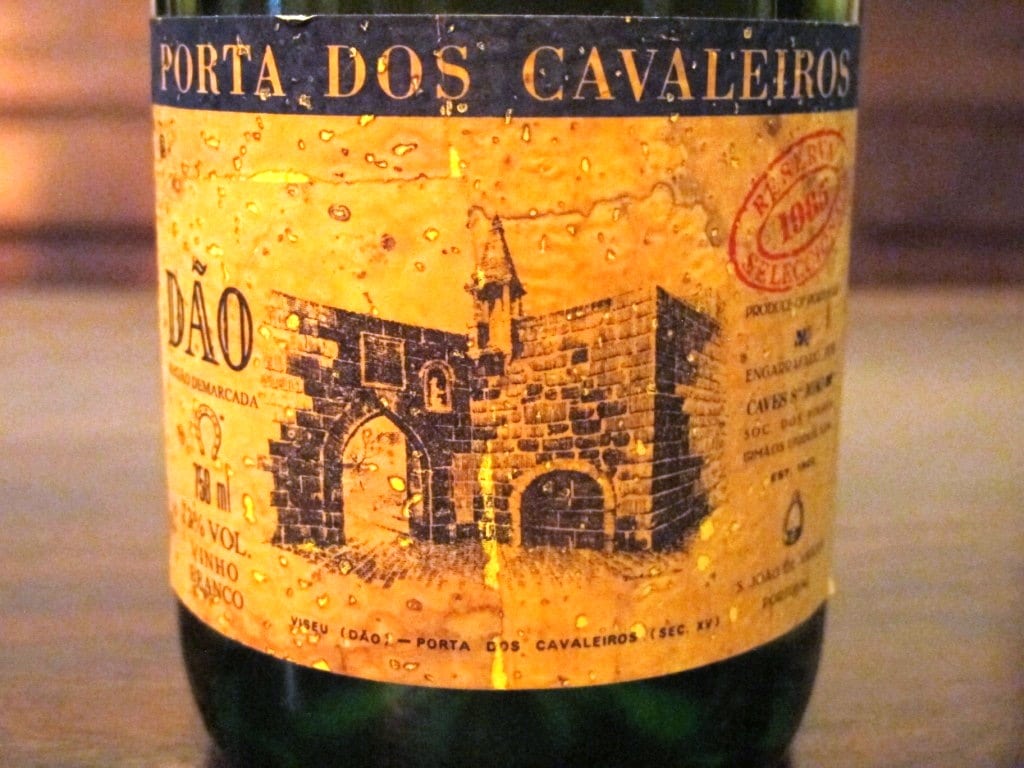 Caves São João pioneered the use of natural cork labels

As for Caves São João’s current portfolio it deftly combines sturdier traditional wines (including still going great guns Frei João and Porta dos Cavaleiro) with modern, fruitier styles.  The latter come from Quinta do Poço do Lobo, the 35ha estate in Pocariça, Cantanhede which it acquired in 1972 and planted to native and French varieties. Both styles have the elegant persistence which I associate with Bairrada (and the Dão).  Below you will find my highlights from each visit and here are tasting notes on the 1959 Caves São João Frei Joao and Caves S. Joao Porta dos Cavaleiros Reserva 1966. 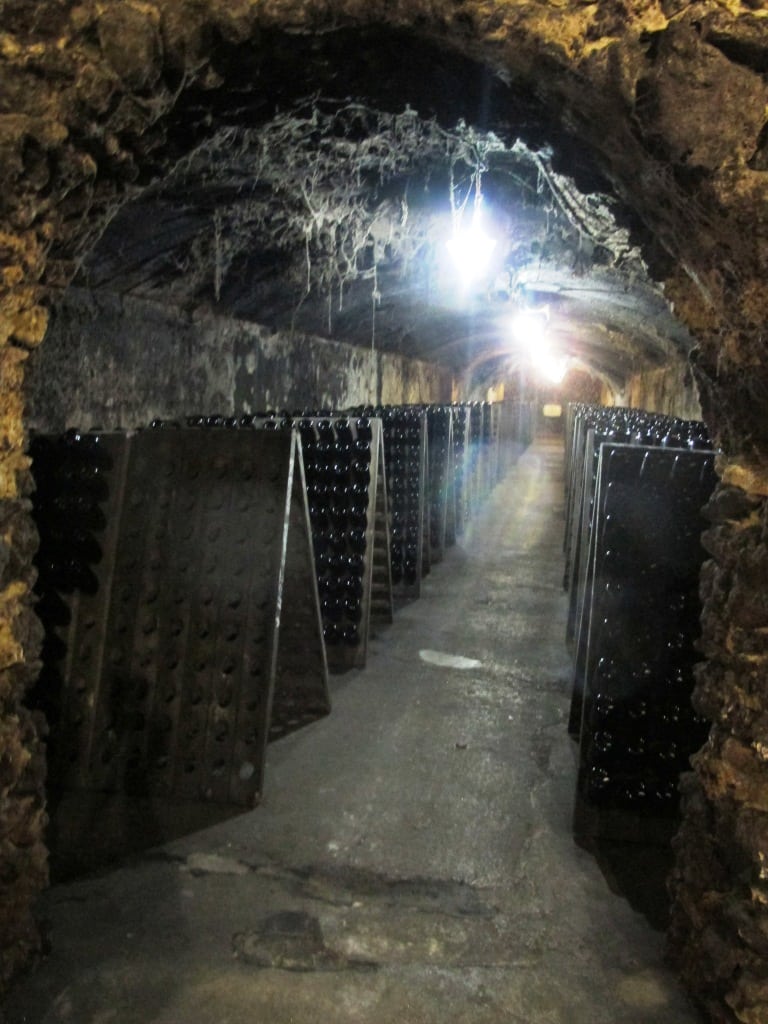 The Bairrada produced Portugal’s first Metodo Classico (method traditional) sparkling wines back in 1880.  With input from Champagne (the French oenologist Gaston Mainousson) Caves São João started producing sparkling wines in the 1930s, wines which are still riddled by hand in its extensive cellars. This 50:50 blend of Arinto and Chardonnay was aged for 48 months on the lees and degorged in May 2013.  Although it reveals some savoury autolytic notes on the nose in the mouth it is well endowed with white peach and zesty ripe citrus.  A persistent bead and acidity lends mouthfeel and impetus.  Very good in a modern fruity yet complex style. 13%

There’s a touch more Chardonnay in the follow on vintage (a 45/55% blend) which puts the emphasis on stone rather than citrus fruits.  The 2009 vintage has a good attack of white and yellow peach fruit which tapers nicely going through thanks to a lively undertow of saline acidity.  A firm, fresh finish reveals a hint of honeyed citrus.  Nicely done.  13%

This part (65%) barrel-fermented blend of 45% Bical, 25% Chardonnay, Maria Gomes 20% and Cercial 10% whose tank and barrel components were aged for eight months on the lees is characterful and textured.  Rich and round it has a slightly oily mouthfeel with apricot and firmer quince fruit.  An attractiveness (apricot kernel) bitterness lends balance as does its undertow of persistent mineral acidity.  12% 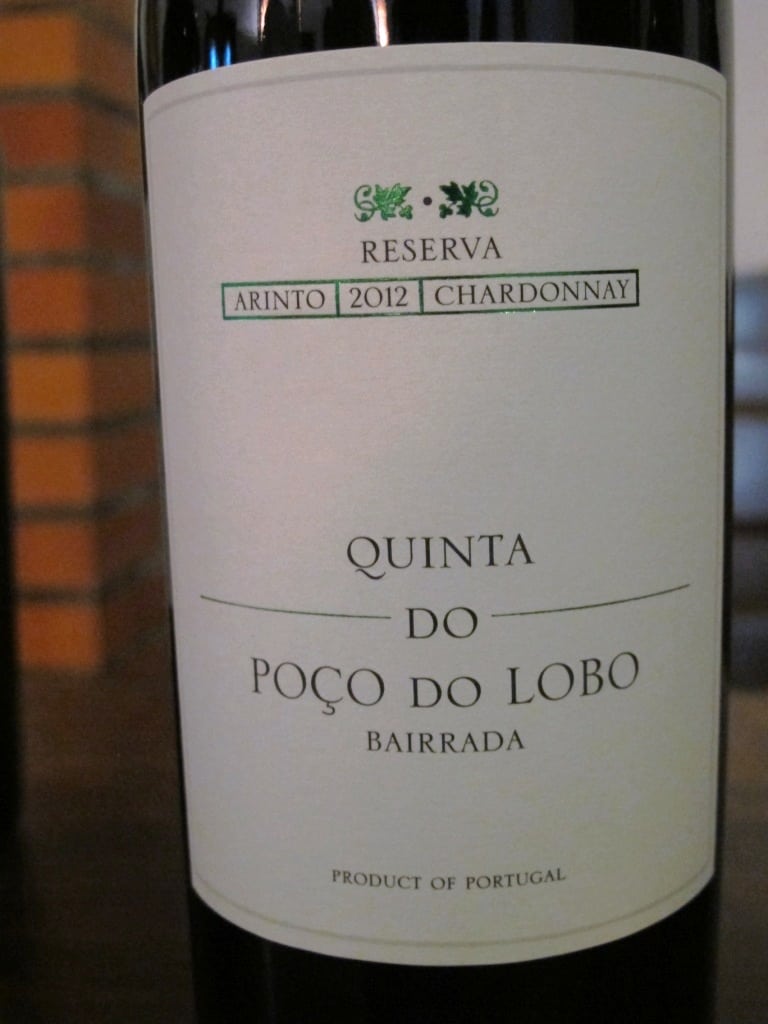 This new launch is a 45:55 blend of Arinto and Chardonnay.  It has a pretty floral (linden) and citrus nose and, with more delicate apricot and peach fruit on the palate, seems lighter and fresher than Frei Joao.  Dry, long and mineral in the mouth with savoury lees, honeyed citrus and a sprightly vein of grapefruity acidity, it should age well.   12%

This field blend of white varieties was aged for three years in concrete vats prior to bottling.  I tasted it on both visits and both bottles showed well, the most recent, slightly less developed.  Deep gold with a gamut of complex layers to nose and palate – cordite, spicy, fenugreek vegetal notes, dried pine needle/resin, fresh porcini (earthy but not damp), orange peel, pot pourri, nutty, biscuity amaretti and baked yellow peach, the whole showing good weight and roll (a salty persistence) in the mouth.  13%

This Bairrada/Dão sourced red is very fresh, with juicily succulent, quite fleshy red and black fruit which rolls along every nicely unravelling spice and smoke nuances as it goes.  With firm but ripe tannin it’s no push over. Nice classic style with bite.  14%

Fleshy plummy Touriga Nacional (50%) with a nip of Cabernet Sauvignon (15%) and a tuck of Baga (35%) makes for an animated violet-edged wine with a blast of pure fleshy plum, juicy firm black currant and berry and more introverted (the Baga tuck) gunflint and balsamic layers.  Despite its varietal composition (all three grapes tend to be rich in tannin) the tannins are ripe and quite smooth which, together with this wine’s mineral-sluiced acidity, makes for a fluid wine with lovely freshness. 13.5% 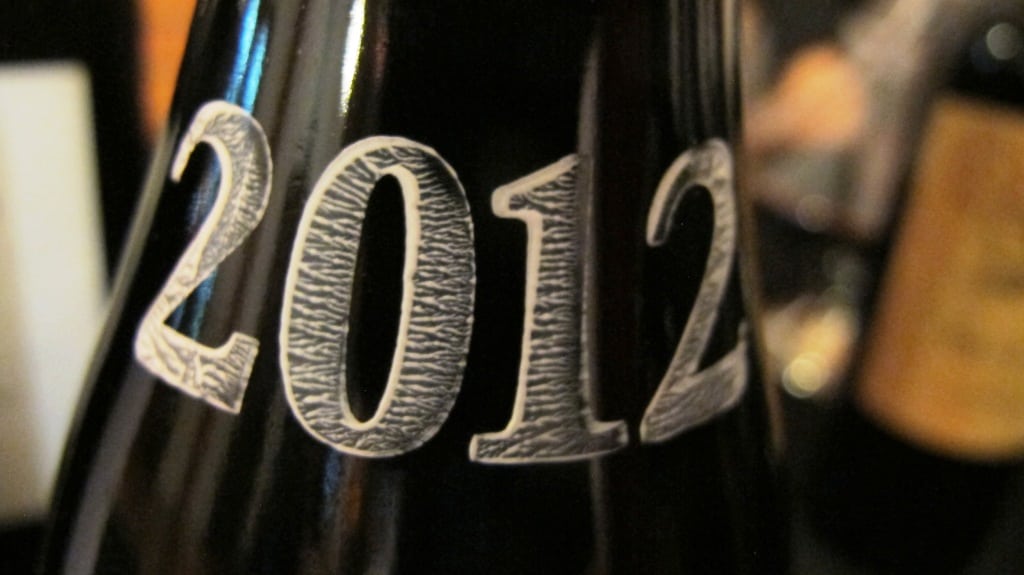 Caves São João has sourced its Porta dos Cavaleiros brand from the same grower/producer since the 1950s.  The first single varietal Touriga Nacional was made in 2005.  Though a very deep, opaque purple this intense Touriga – one of my June Wines of the Month – has wonderful delicacy and spice, freshness and lift to its well defined sour black cherry (nice bite).  An undertow of mineral acidity and a charge of fine tannins carry a long, very persistent finish edged with dark chocolate – together with its violet-laced perfume, a classic signature note of Touriga Nacional.  An excellent expression of the Dão and the grape.

A blend of Baga, Castelão and Moreto (the latter grubbed up about four years ago).  On the attack and through the mid-palate the Castelão’s broadness and sweetness comes into play – fleshy plum, dried fig and sweet raspberry fruit is layered with milk chocolate, vanilla, cinnamon and darker clove and earth notes.  The Baga asserts itself going through.  An austere smoky mineral-sluiced finish has a firm (but ripe) backbone of tannin. Not sure where it’s going but there’s plenty of contrast here which makes for an interesting wine. 13.5%

Initially a little musty on the nose and pretty austere in the mouth this 50:50 Bairrada:Dão blend of Baga and Touriga Nacional (perhaps others) builds with time in glass.  It shows dried fig, orange peel and spicy panforte fruit with dark chocolate, sweet woodsmoke and earthier summer truffle notes. Rustic tannins add to its broadness. Solid but my sense is on a plateau.  12.2% 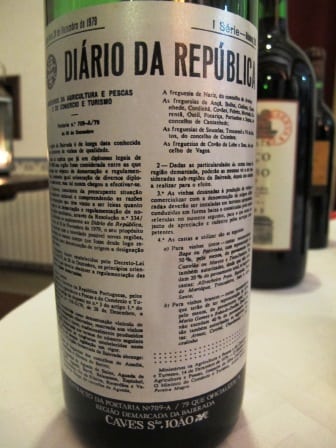 This 100% Baga was released in the year in which the region achieved official recognition hence the going to town on the back label! From magnum it’s a deep plum/aubergine hue with a gorgeous, very fragrant spicy nose of incense and sweet woodsmoke.  With fading blackcurrant and plum fruit it’s much more austere than I expected on the palate with shades of oyster shell and membrillo spice to a rather wandering finish.  Drying out.  Shame after the high expectations of the nose.  Or maybe I needed to sit with it for longer?  12.1%

Lots of depth of colour – quite opaque with aniseed lift to the nose which follows through on a coltsfoot-inflected palate with darker chocolate notes.  I make no reference to fruit other than to say that the wine still retains a sweeteness (for me a suggestion of ripe fruits).  The finish is perfectly lovely, its riff and resonance of lavender and spice teased out by mineral, root and earth sluiced acidity. 12.5%