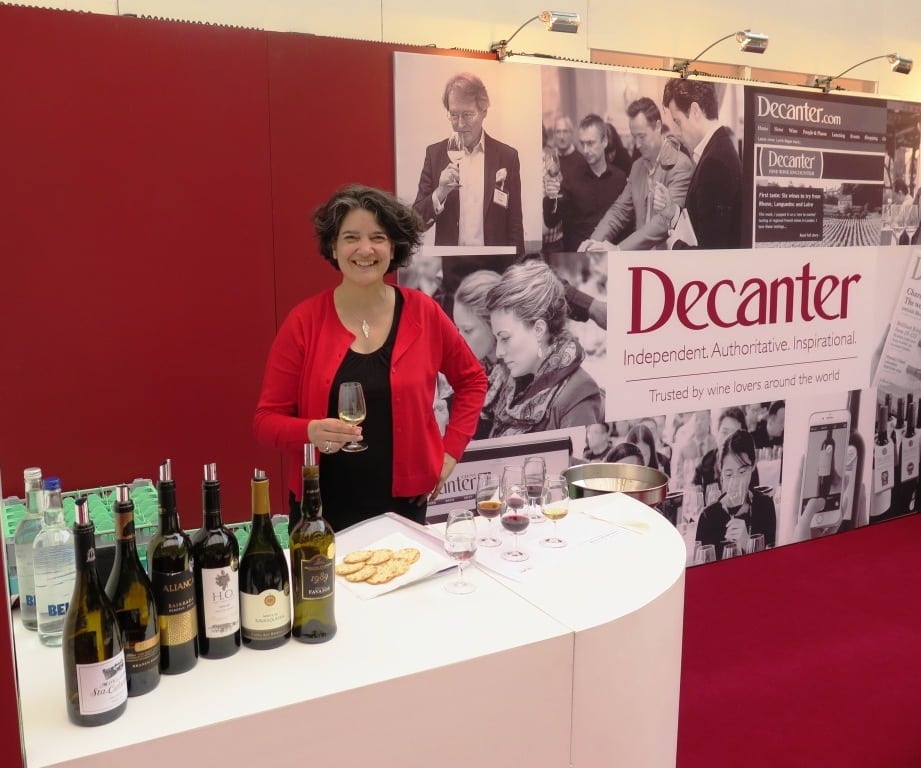 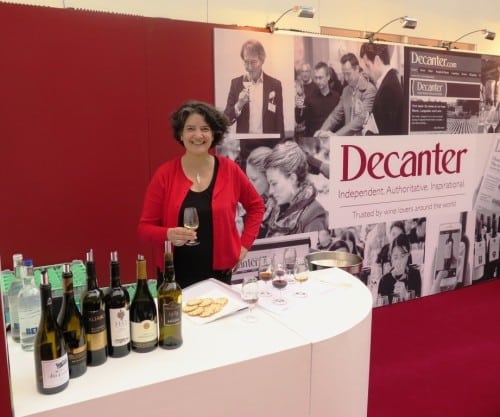 On Monday I had the chance to share my passion for Portuguese wines at a Decanter masterclass at London Wine Fair. I’m grinning from ear to ear because my panel discovered some fantastic gems at Decanter World Wine Awards this year.  My selection of six Gold and Silver medal winning wines provided the perfect platform to highlight what makes Portugal such an exciting wine country.

Below you’ll find notes on my selection and – tasting alert – you can yourself try a selection of award winning wines at the Decanter World Wine Awards Tasting on 1 July 2015 at Vintners’ Hall, London.  Be quick because I’m told it’s almost sold out already – click here for details.  Later in the year The Yeatman Hotel in Vila Nova de Gaia, Oporto hosts a Decanter World Wine Awards Tasting.  Fellow judge Beatriz Machado, Wine Director at The Yeatman, tells me it is their most popular tasting of the year. 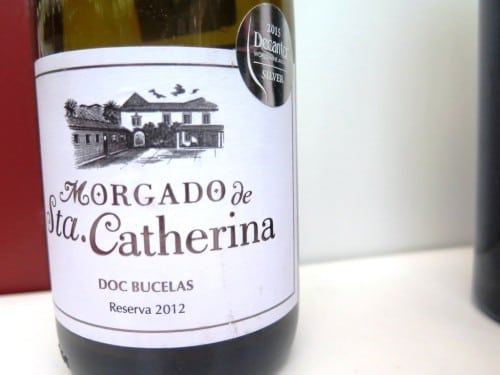 Portugal still tends to be associated with red wines so I made a 50:50 white:red grapes selection.  This silver medal winning ambitious, atypically barrel fermented and aged 100% Arinto (100% new French oak for 10 months) was the first in my line up to showcase just how dazzling Portuguese whites can be.   Dedicated to white wines, the Arinto is the star variety in Bucelas DOC.  The region’s sun-kissed slopes, clay and limestone soils and tempering Atlantic influence produce the racy yet ripe, citrus-fuelled whites once known as “Lisbon hock.”  This top tier wine from the region’s most famous estate reveals rich, ripe citrus fruit and a lime- streaked palate.  Classy oak lends structure and weight, attractive nougat too. The finish is very long – mouth-wateringly persistent – with a mineral undertow. 14% 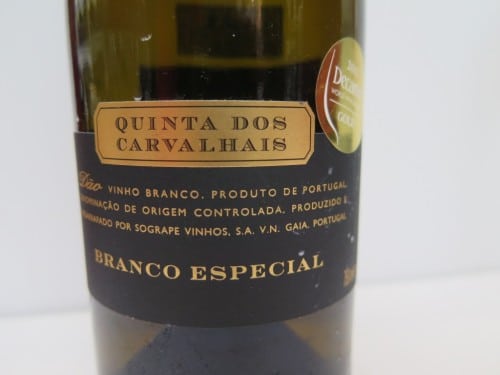 A very good thing about a post-European Union generation of Portuguese winemakers from the 1970s and 80s is that they have been exposed to the global wine market and grasped the importance of standing out from the crowd.  Take this terroir-driven gastronomic wine which proudly proclaims “made in Portugal.”  While it is far from traditional in its methodology (it is a non-vintage super-premium wine), it is traditional in spirit having been aged in wood for a long time in an old-fashioned cellar, i.e. without temperature control.  It’s a breath-taking wine – my most exciting find at this year’s competition and, quite possibly, of the year.  And I’m told it happened almost by accident.  In the course of showing Chief Winemaker Beatriz  Cabral de Almeida around Carvalhais when she joined in 2012, her predecessor Manuel Vieira showed her the experimental wines he had stashed away over the years to monitor how they performed; they had pretty much been let be. Excited by what they found, the pair re-tasted them over the next three months then put together this blend of 31% Encruzado, 15% Verdelho, 15% Semillon and 39% field.  Made of wines from the 2004, 2005 and 2006 vintages, the finished article spent an average of eight years in barrel which explains its deep burnished gold hue and oxidative style.  An oxidative style which, I might add, much to its credit in no way detracts from this wine’s origin.   In fact, with a resin-edged nose and palate which fair bristles with energy and intensity, it could not do more to proclaim its Dão-ness.  Powerful, with tremendous drive and complexity to its piquant, salty layers of concentrated citrus peel, dried stone fruits/flowers and honeycombe, it brilliantly showcases Portuguese winemakers’ ability utterly to master the art of blending.  Bottled at the end of 2013, this wine has tremendous vitality; much more to give yet.  In fact Cabral de Almeida compares it to the famously ageworthy wines produced by Cardoso de Vilhena at the Centro de Estudos de Nelas.  I tasted one of his ’71 whites a few years ago and can see the comparison, though I reckon this wine has probably been broachable younger because, despite its terrific structure and focus, it has a corpulence about it too.  14.5% 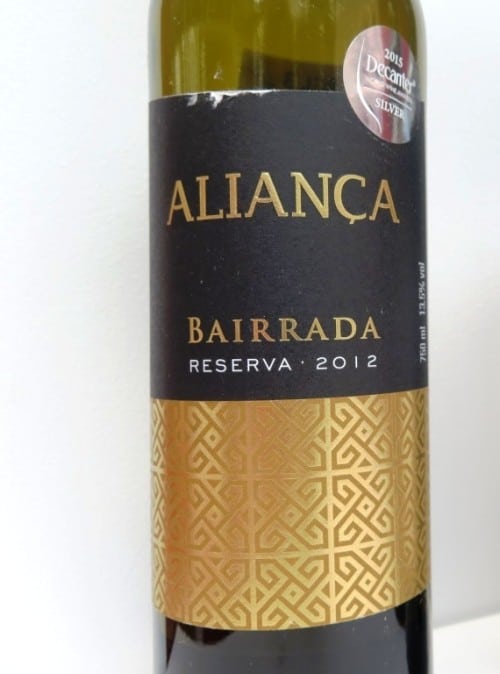 Portugal has seen a quantum leap in producers’ understanding of grape variety and site.  Nowhere was this perhaps more necessary than in Bairrada (check out my regional guide here).  According to Fransisco Antunes, “it is one of the most difficult places in Portugal to grow grapes,” especially late cycle varieties like Baga and Touriga Nacional.  And yet Alianca’s Chief Winemaker has (one might once have said bravely/foolishly) deployed both varieties (60%, 10%) in this Silver Medal winning unoaked entry level wine, together with 30% of early ripener Tinta Roriz .  The fruit really flies in this smooth, plummy red with hints of violets and Baga’s trademark clean, focused, slightly smoky finish.  It’s a testament to the free-draining, heat/light reflective clay and limestone soils which facilitate the ripening process in a region which is prone to high spring and autumn rainfall.  A hugely drinkable and gastronomic entry level red with character.  £7.50 at Wines of Interest. 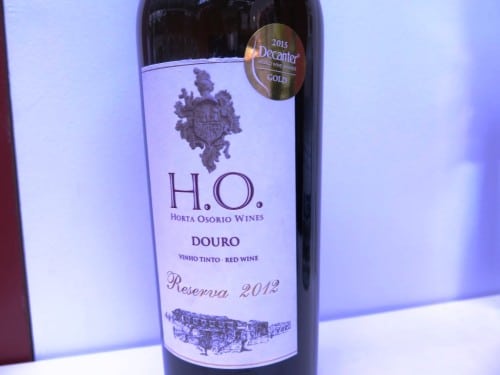 When I first visited Portugal, there might be only a handful, sometimes just one, star player in each region. These days there is a countrywide tail of rising stars behind each region’s comet of star players so, in some respects I wasn’t surprised that we awarded Gold to two Douro producers whom I’d not previously encountered.    Portugal is full of hidden gems and the Douro and Alentejo in particular have seen huge growth spurts in wine production.  The story behind Horta Osório is familiar.  The Baixo Corgo estate has been in the same family for generations and has grown grapes/produced Port since the 18th century.  However, until recently, the grapes/Ports were sold to a Port shipper.  The Horta Osório Douro wine brand was only launched in 2012 by José Antonio Horta Osório, who built a new winery for the project that year (the first wines were made in 2010).  Then aged 82, I think the former energy industrialist must have taken his pension in kilowatts!  No doubt the precocious start can also be attributed to his consultant winemaker Joao Brito e Cunha who, it so happens, consulted on no less than three of Decanter’s four Gold Medal winning Douro reds.   My panel particularly appreciated the freshness of this wine which, I suspect, is down to its Baixo Corgo origins with a helping hand from the weather conditions in 2012 – a temperate year. (The Baixo Corgo is the Douro’s coolest, wettest sub-region, plus the high acid Sousão grape is a key player – check out my regional Douro guide here for more information).  It’s a deep hue (Sousão helps) with a schistous, wet, salty slate character to the nose which follows through in the mouth together with vibrant, juicy blood plum, red berry, currant and cherry fruit.  Aged for 15 months in new French oak, savoury ripe but present tannins bring structure and line.  The oak is worn quite lightly flavour-wise.  Very well made.  14% 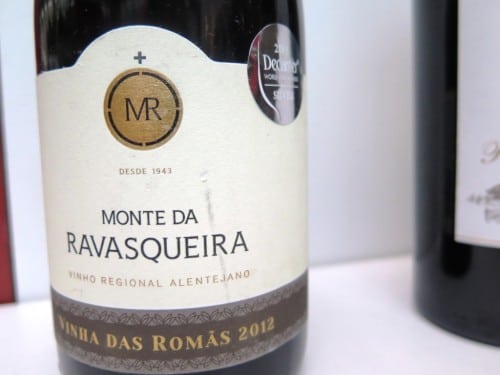 In contrast with a decade ago,  insofar as French grapes are used today, it tends to be because they really work, not because it makes for an export-friendly so-called passport label. Knowing which grapes perform best and where has been key to unlocking Portugal’s full potential and you may recall from my recent post about Monte da Ravasqueira that precision viticulture has been used carefully to map the vineyard.  This Silver medal winner makes excellent use of Syrah (70% of this blend with Touriga Franca) and shows off the relatively moderate microclimate of this estate which experiences a very pronounced diurnal temperature variation thanks to elevation and the surrounding forests and dams.  It has very juicy dark berry and currant fruit, pithy tannins and an undertow of minerality to its long finish.  Very precise of structure and fresh for Alentejo, yet with a wildness to its flavour profile.  Very good indeed.  Check out my earlier review of the “Pomegranate Vineyard” (Vinha das Romas) here – I tasted it over a couple of days and you’ll find more background about this exciting relative newcomer which produced its first wines in 2001.  13%  £22 at Halifax Wine Co, Salusbury Wine, Wine Reserve, Vagabond. 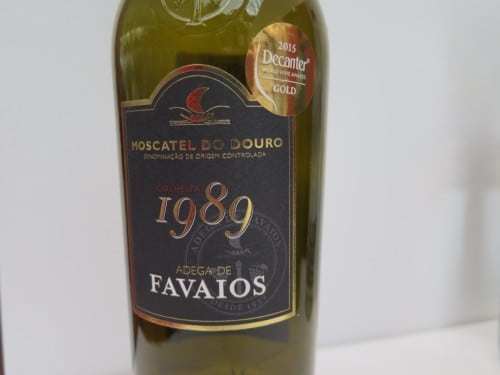 While there are plenty of dynamic, cutting edge developments in Portugal I’m pleased to say that winemakers have not thrown the baby out with the bath water and given up on tradition.  Being a Douro fortified, my last wine in the line up could not be more traditional however, compared with Port (and indeed Moscatel de Setubal from the peninsula of that name just south of Lisbon) Moscatel do Douro is a hidden gem which flies under the radar.  Vintage examples like this one are rare, top tier wines.  This gold medal winner is a great example of the genre, which I always find fresher and more delicate than its Setubal sister.  These characteristics can be attributed to the fact that Douro Moscatel comes from elevated sites – Favaois is located at between 550 and 630m at the northern end of the Pinhão Valley.  Another factor is the use of Moscatel Galego a.k.a. Muscat á Petit Grains. It is generally regarded as finer in expression than Setubal’s Muscat of Alexandria.  The 1989 vintage from this co-operative which accounts for some 70% of Portugal’s Moscatels (it has some 550 growers spread over 1500ha) comes from the cream of the crop.  It is soft and a little savoury with mildly spicy chutney on the nose.  A gentle, delicate, silky smooth palate reveals subtle orange blossom, juicily fresh caramelised oranges, honey cake, dried fig and café créme notes. A long, fresh finish has very attractive toasted almond resonance.  17.3%  £36.93 at Prestige Wines of Portugal.