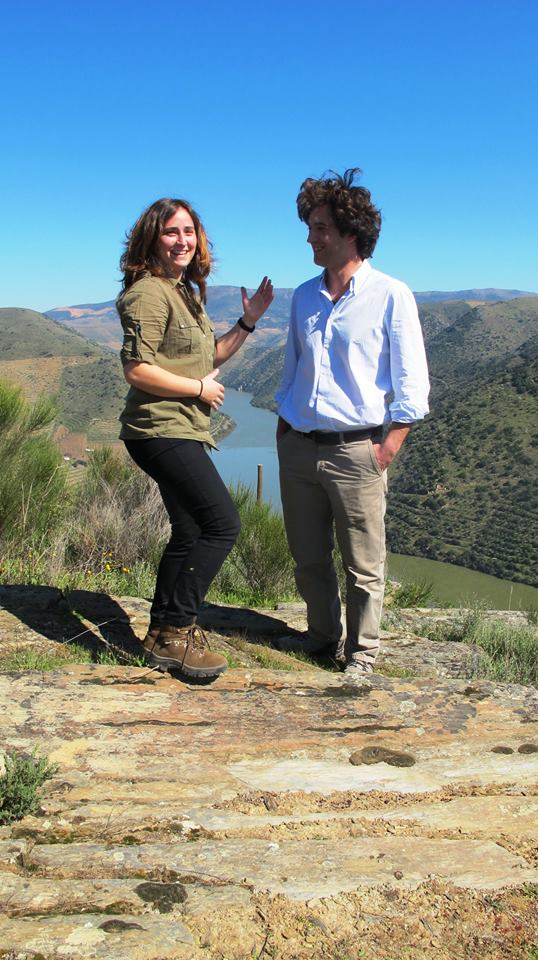 I interviewed Sandra Tavares da Silva of Wine & Soul for wine-searcher.com recently.  The Lisbon-born winemaker told me that, when she started working in the Douro even around the turn of this century, “it was like the end of the world.”

Thanks to new roads and a proliferation of places to stay and eat (as to which watch out for my upcoming wine travel feature in December’s issue of Decanter) the Douro Valley is less remote than it used to be.  Still, it remains unspoiled, perhaps because the region’s Port shippers and growers – its lifeblood – have worked or lived in the region for generations.

Mateus Nicolau de Almeida (pictured) is a case in point.  His family used to own Ramos Pinto, so he boasts a peerless Port pedigree.  However, I doubt anyone can trump this young gun’s table wine bloodline.  His grandfather is Fernando Nicolau de Almeida who, inspired by a trip to Bordeaux, created Barca Velha, which was the Douro’s first table wine of note.  His father is João Nicolau de Almeida, chairman of Ramos Pinto, who helped José António Ramos Pinto Rosas (Mateus’ great uncle), establish pioneering Douro Superior estate Quinta de Ervamoira.  You can read a recent report of my visit to Ervamoira here.

Like father like son, Mateus studied winemaking in Bordeaux before returning to the Douro.  Rather than working for his father at Ramos Pinto (where his wife is a winemaker), he told me his idea was to make his own wine “that could reflect my family tradition but also what I have learned in France and other countries where I have been.”

Describing himself as a “Douro Vigneron,” he does everything from planting to bottling his Muxagat wines (incidentally, Muxugat means cat and owl in Portuguese).  Though he has his own vineyard, Quinta do Monte Xisto (planted 2005-2006, pictured top, Muxagat below), he doesn’t just vinify his own grapes because, he says, “I like to use mixed old vineyards from higher altitudes such as Muxagata and Meda to have more complexity and acidity on the wines as my grandfather did with Barca Velha and my father with Duas Quintas.”  Mateus’ business partner, Eduardo Lopes, owns vineyards in Meda at 500-600m (as well as a beautiful old granite winery which the pair are slowly restoring).

Mateus explains “in general in the Douro we all do that. Our ‘terroir’ is the different altitudes (we can go very fast from 150 to 600 m high) and different solar expositions and the huge quantities of local varieties. It’s great because our soils don’t change so quickly as it does in France. We have one kind of soil: Schist!”

Located in the Douro Superior, generally the warmest and most certainly the driest Douro sub-region, Quinta do Monte Xisto is certified organic.  Mateus also follows biodynamic practices though not, he cautions, “the exact ideas, because I think they are too strict.”  Rather his focus is on “having a better fusion between human and plants and to have a mutual respect and understanding.” He adds “Douro Superior is a perfect place for that because it’s still a very wild region.” Among other things, he uses plant tisanes such as cactus (to protect from the sun), eucalyptus (antiseptic), fern (it keeps undesirable insects at bay), nettles (fertilizer) and 500 preparation.

In the winery, I was intrigued to learn that Mateus uses Austrian oak.  I had wondered if it contributed to a resinous character I find in Mux Branco (and which is a little pronounced for my taste).  I was just as intrigued by Mateus’ reply because most winemakers I meet seem thoroughly intoxicated with the big names in cooperage.  So here it is in full: “[F]or the oak I’m motivated to look always for different woods but also I’m motivated to work with small coopers that work for themselves the wood as I do with my wine. I’m working with austrian but also german wood because I find that they respect more the essence of the wine and don’t mask the character of the grapes. I discovery it through friends and contacts that I have there. I like also french oak but it depends of the cooper. As you know nowadays there is a big industry of oak casks and to find the right wood for your wine is very difficult. So I’m always looking for different and small coopers. Also I stop using 225L barrels because I think that bigger volumes are better adaped to my wines. So I’m using 600, 700 and 2.000 L barrels in order to get more bright and dynamic wines. Also the new barrels are always used first on the white wines (that have lower ph) and then I pass them to red wine. On the red MUX I don’t use new wood. I’m also using egg shaped concrete tanks in Muxagat Os Xistos Altos 2011. Let’s see how it works.”

A thoughtful winemaker then, whom I’m looking forward to actually meeting/visiting, though his wines are pretty articulate, especially the Muxagat Os Xistos Altos 2010, so I’m excited about the egg-fermented 2011!  Although I’m uncertain about Mux Branco and/or its Austrian oak, I love the fact that he doesn’t use oak at all for his Tinta Barocca and uses only seasoned oak for his reds.  The variety and terroir respectively really shine through. Berry Bros & Rudd stock a selection of the wines; here are my notes:

90% Rabigato, 10% old vine field blend, sourced from seven parcels, naturally fermented and aged for 9 months in 40% 600l casks, the balance in cement tanks.  Very reductive on nose and palate, quite phenolic too with a resinous note, (though not as pronounced as the 2010, which got in the way of the wine for me both times I’ve tasted it).  The palate is punchily saltily/mineral, with quite strident reductive struck match notes – tightly coiled but edgy.  Beneath lies citrus peel and stone fruit which, close to the kernel, is a touch bitter on the finish.  Very young and turned in at the moment, even on day two.  One to review.  13%

Given Portugal’s propensity for varietal blends, especially in the Douro, it’s really unusual to find a single varietal white wine like this Rabigato.  From the highest parcels of Ranigato at 500m, it’s tight and lemony on the nose, with a crystalline mineral quality which follows through in the mouth.  Very citrusy, with razor sharp acidity on attack, though it broadens out going through, it never loses touch with its juicy, zingy undertow of acidity.  A dash of quinine reminds me of a Chenin Blanc, as does its subtly textured yellow plums and al dente apricot.  French oak buffs and tailors the fruit, keeping it in line while adding smoky, roast hazelnut nuances.  Lovely, long, lingering, mineral finish.  Very good indeed. This wine was naturally fermented and aged for 14 months in 2000l French oak foudres.  12%

My introduction to Tinta Barocca came courtesy of Raul’s Old Basket Press from Beaumont, South Africa.  Back in my Oddbins’s days, it was much touted for being a 15 percenter – zinful stuff.  And when I think of Barrocca as a component of Port, it all makes sense because the grape is renowned for its high sugars and high alcohol – we’re talking robust!  So this wine surprises me.  It’s positively mild mannered up to Raul’s Old Basket Press Red, like a really drinkable (i.e. fully ripe) Loire Cabernet Franc.  Sourced from an elevated north-facing vineyard on schist/granite soils at 600m (very high for red grapes) and fermented and aged in concrete vats, this is all about bright (red) fruit, freshness and perfume with Douro minerality. The tannins are fine and powdery; a lick of liquorice and cinnamon spice lends interest to the finish.  Not wildy long but it’s got lots of character and brio for a wine that’s perfect for drinking now and over the next couple of years.  Looked even better on day 2, with its tongue staining tang of fresh picked fruit.  Love it.  13%

Bright purple in hue with a reduced, peppery nose with floral notes behind, this wine is attractively sheer with fruit spice and floral notes to its juicy and translucent blackberry fruit. Ripe but present chalky tannins lends a tactile note to the finish.  An interesting, lighter style with bags of charm (tasted in December 2011).

Rich, ripe and plummy with perfumed blueberries and hints of dried fruits.  To balance this warmth there’s a salty piquancy, good acidity and a firm edge of spicy fruit-driven tannins too.  I prefer the ripe but brighter (less dried fruits) profile of the 2009.  Needs time, but promising.

This is very 2009 in its rich, velvety concentration of floral-scented parma violets fruit (60% Touriga Nacional, 35% Touriga Francesa & 5% Sousao, sourced from two parcels at 250m [which is foot-trodden in lagares with 50% stems] and 550m).  There’s a profound, very well balanced layering of flesh and bone here, with a bright charge of blackberry, blueberry and red cherry fruit well melded to ample supporting tannins, woody and rustic in a good earthy way (it is aged in 500 and 225l used barrels for 14 months).  Cinnamon, liquorice and mineral salt lick notes lend piquancy and complexity to a long, animated finish.  Very good and, while attractively primary and powerful now, has plenty of go.  13.5%