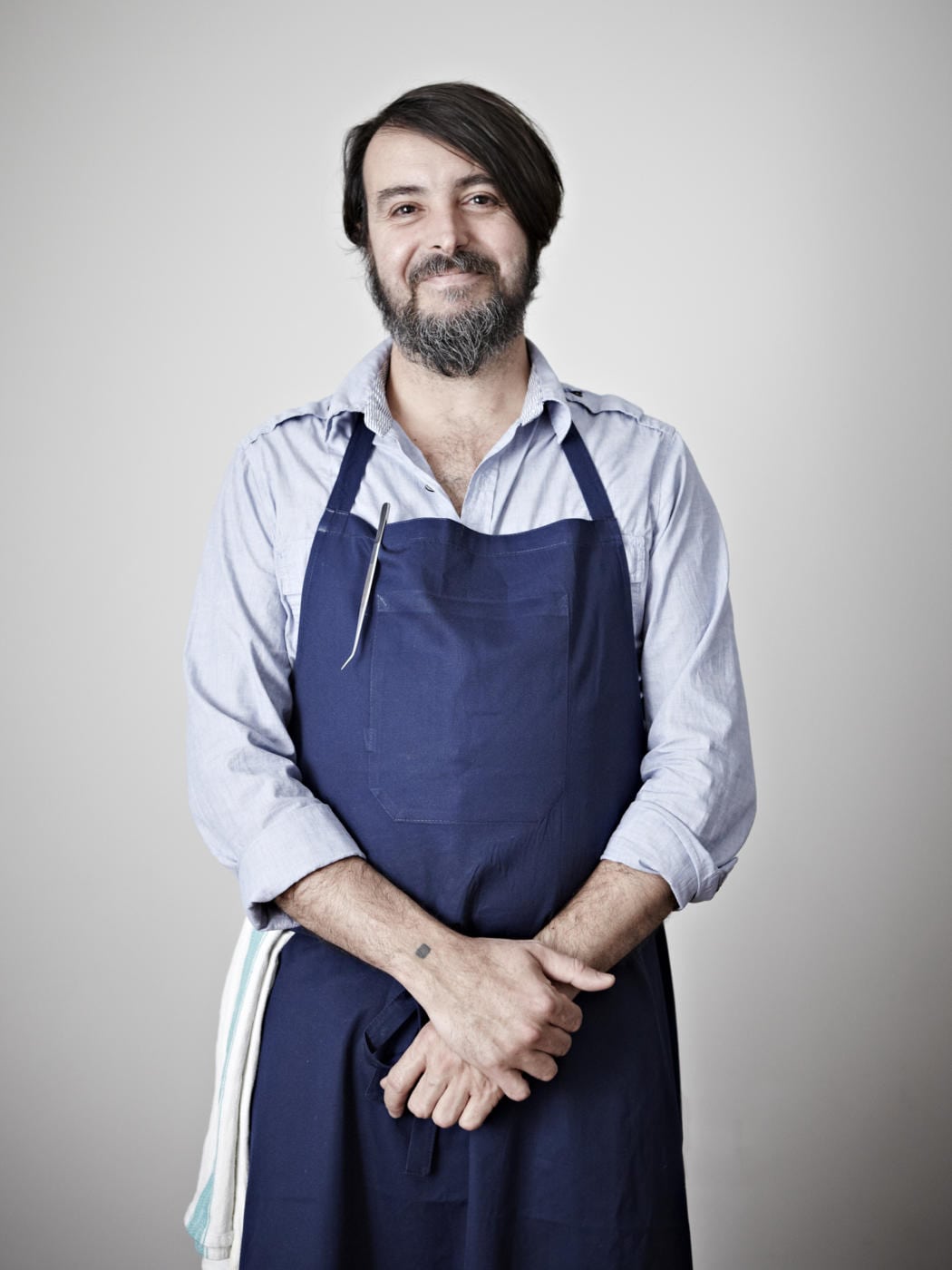 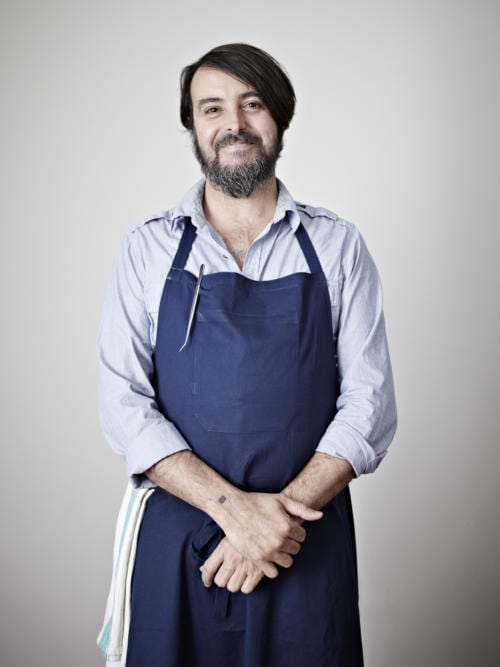 The name, not to mention Viajante’s location within The Town Hall Hotel in the melting pot which is Bethnal Green, serves to underline this rolling stone’s approach to his craft. As he advises young chefs, “this is what you do, this is your trade, so travel, read [about food], look around and taste as much as possible.”  Advice which he readily agrees is of equal application to his country’s winemakers.

Sure enough, Viajante’s wine list (see below) features among Portugal’s most renowned globe trotters – Dirk Niepoort, Luis & Filipa Pato, Rita Marques Ferreira (and, rather wittily I thought, the rare as hen’s teeth Buçaco wines, which are made at the Bussaco Palace Hotel).  For Mendes, they are “friends” who share his “cerebral” take on their work,  “looking at tradition and technique, looking outside – at how and what we eat.”  He’s only half-joking when he says “twenty years ago, people were making bombs that punched you in the stomach and you needed half a cow and three kilos of butter or cheese to go with it!”  He ponders, “sometimes I think people don’t look at food, but it’s important to be aware of what’s happening in the food and wine world and to find a way to fit it in other people’s realities.”

Though I knew Mendes had an impressive international c.v., I hadn’t appreciated until I read his interview with “Up” (Portuguese airline TAP’s magazine) that he has never practised his profession in Portugal, which he left to study marine biology in the States aged 19.  So when I met with him earlier this month, I was keen to find out why he left Portugal, what lead to this Jacques Cousteau fan’s shift from fraternising with fish to frying it and finally, how does he bring Portugal to the table today?

Mendes explains that, when he graduated from high school in the late 1980s, Portugal was not a terribly exciting place to be.  Studying marine biology in Miami provided a way out but, much as he enjoyed it, the swift realisation that only the privileged few could live the life aquatic Cousteau-style meant he was soon back to the drawing board.  This time, Mendes’ role model was closer to-home – his father, from whom he inherited not only the travel bug, but also an obsession with food.  Indeed, Mendes’ The Loft project may have been at the vanguard of Shoreditch’s supper club scene but Mendes Senior got there first, some 14 years ago opening a supper club at his home in Nicaragua a few years before he died.

Looking back, Mendes reckons his father, “a very, very good cook,” ended up in pharmaceuticals after medical school “because it was about recipes and cocktails!”  The job also allowed his father to visit restaurants around the world – “he was always curious and passionate about food.” It meant that, from a young age, Mendes was exposed to good food, whether fine dining or fresh caught mullet in a tasca (tavern) on the beach or a tasca in Alentejo.  Ethnic food too.  At the tender age of six, he recalls accompanying his father to the opening of Lisbon’s first Japanese restaurant. 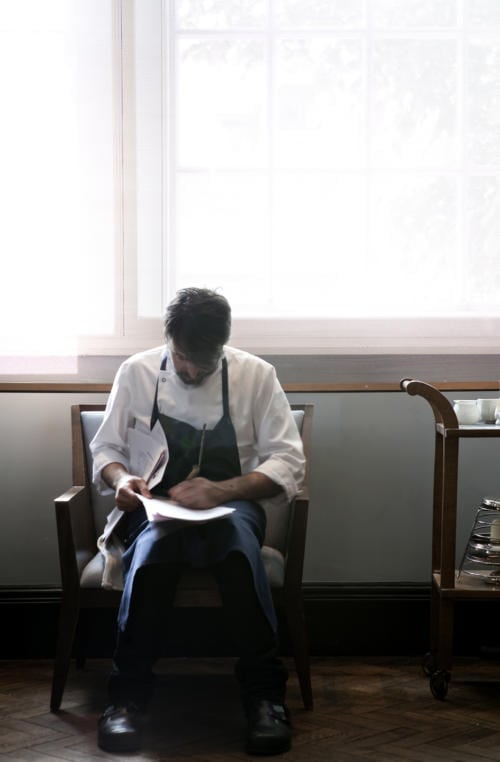 “Ever since I can remember” he told me, “I was obsessed with food, reading cook books in my grandma’s kitchen and looking at the images.” It just never occurred to him that it might be a career until he found himself at a crossroads after he dropped out of his marine biology course.  In America (the land of opportunity) and in the mid-nineties (when chefs like his future employer, Wolfgang Puck, had become household names), it now seemed possible.  Mendes applied to train at the California Culinary Academy in San Francisco.

Pending the granting of his visa, he agreed to help his now retired father make a go of the family’s dairy farm in northern Alentejo.  Mendes admits that, at the time, it was frustrating.  After the Miami scene, being stuck on a farm in Alentejo in the back of beyond seemed like a backwards step.  Six months turned into nine months as the wheels of bureaucracy turned pitifully slowly.  In retrospect he recognises that it proved to be one of life’s most valuable lessons because, once he made it to California, it helped confirm that his leap into cooking – “a roll of the dice”- was what he really wanted to do.  That he had found something he was passionate about – “an identity, a home.”  The next step was to find out if he could do it for a living and succeed.

His first stint at Woodwards Gordon, a “very cool” 35 seat restaurant in San Francisco proved that he loved cooking even more. With just a couple of standard fridges and no freezers, everything was fresh and seasonal – fish from the Pacific North West, produce from local farmers – “we were touching product all the time.”  Next, he moved to Wolfgang Puck’s restaurant.  With 400-500 covers a night, everything came in whole and was processed in-house – cows, lambs, tuna; “every day we made bread, pretzels, oreo cookies, ice-cream, pasta, pizza, sausages, terrines, even Peking Duck – it was like another school.”  And the “schooling” continued with Rocco di Spirito and Jean-Georges Vongerichten in New York City, Ferran Adria at El Bulli, then London all the way – Rama at 50 St James in London, Bacchus in Hoxton, then The Loft, now Viajante.

During his travels, even now in London, I wonder if Mendes has missed Portuguese cooking?  He smiles, fondly recalling how he cooked Portuguese dishes like açorda [bread soup] and Porco à Alentejana (pork and clams) or Portuguese-inspired seafood rice dishes when in charge of staff meals for 80 at Puck’s restaurant – “for these guys, it had to be good, it was like a competition.” More generally, brought up in Lisbon with the Atlantic on his doorstep, he traces a preference for cooking fish and seafood back to his Portuguese roots. He has a yen to “tweak” some really traditional dishes too, such as “sour, sour, sour but sweet too” Porco com vinho e alhos – pork slow-cooked in red wine and vinegar – a dish he vividly remembers eating at Fialho, one of Alentejo’s top traditional restaurants.

“The older I get” he says “it’s the Portuguese touches that excite me at Viajante most of all.” With the wine too, where the growing Portuguese section is the second biggest on the list since, as Mendes points out, “our guests know that I am Portuguese, so this is the perfect place to showcase the treasures that we have.”  And serving them blind on the (also blind) tasting menu is the perfect way to take customers unfamiliar with Portuguese wines on a new journey.  Of his clientele he says “people are of a mindset that they are open to the ideas…The point here is that this not about [á la carte] service [of a starter, main and dessert], but an experience.”

In future he is hoping to set up “a very casual, fun, modern but rustic” Portuguese restaurant in London.  However, “very much for the record,” he lets rip that “one of my biggest frustrations is that it’s so hard to find good Portuguese product.” Even though, he adds, “I can say with confidence the wealth of products we have in Portugal is definitely on par with Spain – we have amazing unique products.”   The problem?  “First production is very limited in quantity and second very few artisan producers see the potential outside the local market to expand their project – it’s hard for them to see how they can take their product from Portugal to Selfridges.”

Though in an ideal world he’d love to head out there in a car to dig around and find an amazing steady stream of olive oils, pork and cheeses, Mendes says it’s difficult to focus on it given his other commitments.  But seeing this gently spoken chef so fired up, I’d be very surprised if he doesn’t find a way to help out and raise more awareness about Portuguese produce and regional cooking one day.  He concludes “we have millions of stories to tell about our traditions and the people behind this story.  I would love to work on it, because [referring to the economic crisis] it’s sad to see my country go down.”

Head Sommelier & Buyer Christophe Richelet has been steadily extending the impressive list since he joined last year. It includes lots of wines and producers whom I rate highly, so you might want to check out my reviews using the search facility in the top right hand corner of this site.

As for wine retailers, where he says “Hackney is my bubble,” Bottle Apostle is Mendes’ wine shop of choice – “every time I go there I smile because I see my friends- Filipa [Pato], Luis [Pato], Dirk [Niepoort], Rita [Marques Ferreira] and it’s so nice to see a beautiful shop where people are curious – keen to know stories.”