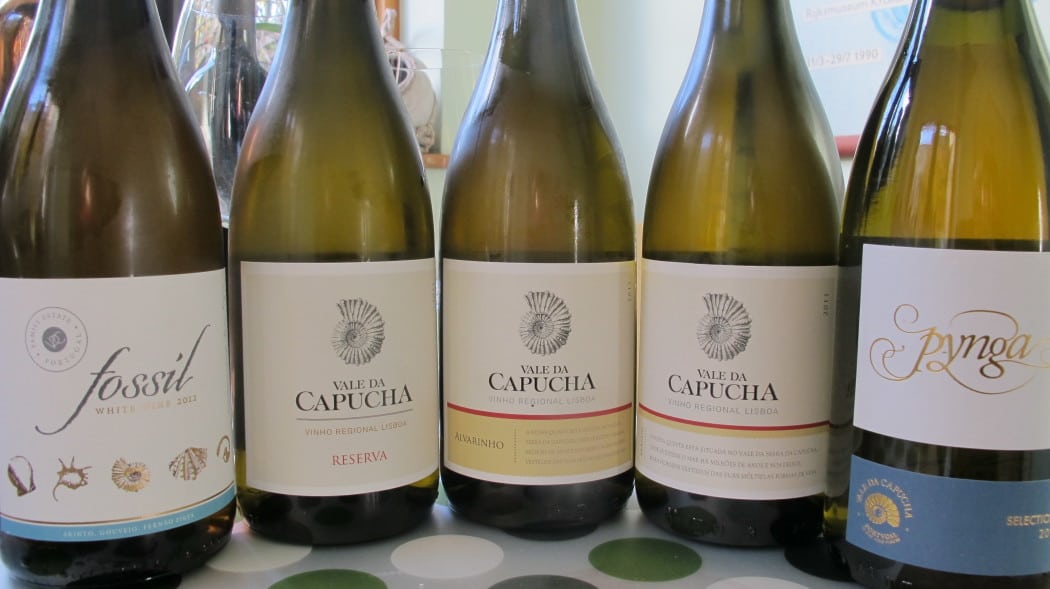 Lisboa: living up at last to its white wine potential

A few years ago, Portugal specialist Nick Oakley told me he was determined to winkle out some great value white wines from Vinho Regional Lisboa.

The region encompasses the long strip of Atlantic coastline between the Tagus estuary in the south to Beira in the north. Inland, it stretches to the borders of the Tejo region.

With its temperate maritime (Atlantic) climate and Jurassic pockets of limestone and clay, Oakley and I firmly agreed that this productive region (according to the IVV, Portugal’s largest wine production and vine area) undoubtedly had potential.

Yet outside Arinto-focused DOC Bucelas, only a handful of producers, notably Monte D’Oiro and Quinta de Chocapalha, have successfully harnessed it. And, given their relatively sheltered location, (Monte D’Oiro’s tip top Madigral Viognier aside), their ambition has primarily revolved around premium reds.

But praise be.  Oakley has succeeded with Vale de Capucha Fossil 2012.  Even better, it costs only £8.50 and is widely available via Asda (whose wines you can now buy online).  Plenty of bang for buck for a wine of this complexity and interest (from an organically cultivated vineyard to boot).

Bigger picture, I’m noticing a marked improvement in white wines from Lisboa’s more exposed, coastal regions, including something of a (small) renaissance of its traditional DOCs, Colares, even Carcavelos. In fact, the whites are very much the forte (together with some really good cracks at Pinot Noir).

Starting with Fossil and its Vale de Capucha stablemates, here are my recent (white) highlights:

So-called because the vineyard’s clay-limestone soils are rich with fossils.  And this Arinto, Gouveio and Fernão Pires blend has a rich, yellowish gold hue.  Sunshine to its ripe, stone-fruited palate too.  But what elevates this unoaked wine from a fruity little number to a versatile, food-friendly glass is its crisp, bright, mineral acidity – the product of mild Atlantic temperatures and foggy mornings (also handpicking the grapes in the cooler hours of the day).  All of which brings classical line and length to this fruity but structured white.  14% abv A great buy at £8.50 at Asda.

Slightly funky/leesy (in a good way on nose and palate) with nice intensity to its pineapple and apricot fruit, plus an edge of greenness (here fennel) – a quality I like to see in Alvarinho.  Really lipsmacking acidity makes for a firm, persistent finish.  One of the best Alvarinhos I’ve seen outside Monção e Melgaço, Vinho Verde. 13.5%

Like Fossil, a blend of 42% Arinto, 35% Gouveio, 23% Fernão Pires, though here the fruit is riper and weightier, with a savoury leesy, nutty tang to the finish.  Amplifying Atlantic acidity lends pace and race(iness) to the finish.  14% abv

A different, quite eclectic blend of 53% Viohsino (which I associate with the Douro), 31% Arinto and 16% Antão Vaz (an Alentejo grape).  This is weightier still, with Arinto’s tropicality and line, richer Antão Vaz girth (think rum baba) and very subtle but welcome Viosinho floral/elderberry lift.  Complex and leesily textured.  Lots to like here.  Very good.  14% abv

From limestone soils on the north side of the Serra Montejunto (mountain).  This is the third vintage of this unusual single varietal Vital I’ve tasted and I’m a fan, especially of this more subtly oaked vintage (compared with the 2011).  It positively glistens with minerals, together with sweet lemon zest and vanillin oak.  The finish is long, rolling, pure and pristine.  Wonderful limpidity and, excuse the pun, vital acidity. 12.5%

This late harvest Vital is new to me, perhaps at Casal Figueira too.  It too is possessed of lovely purity and limpidity so, while quite sweet (with ripe mandarin and peach), it’s not all about concentration and much the better for it.  A beguilingly gentle sweetie.

Famous in the past, property development had seemingly put paid to viticultural development and ambition in this coastal region.  So it’s exciting to see the emergence of new wines from Colares.  Casal de Santa Maria’s winery and vineyard is located near the Cabo da Roca, the most western point of continental Europe.  Wine was produced here up until 1906.  One hundred years later, its centenarian owner, Baron Dr. Bodo Von Bruemmer, has revived 7.5ha.  Made from traditional white grape Malvasia de Colares this reveals the pungency and complexity I’ve previously encountered in those rare glimpses I’ve had of the region’s wines to date.  It’s resinous, flinty and smoky with a methoxypyrazene vegetal quality/pungency and salted limes.  Notes of fino sherry and dried honey come through on the finish.  Fascinating complexity – pungent of profile but not too strident in the mouth, this is a lean, saltily mineral wine, subtler than it sounds. 12.5%

A creamier expression of Colares than the Casal Santa Maria, though similarly funky/bosky, with dried honey, floral and fynbos notes.  Good minerality too.  Textural, long, subtle and interesting. An excellent modern unoaked take, fermented in stainless steel and aged on fine lees.

An attractive white which plays well to each variety’s strengths, sporting the green tropical fruit profile of Verdelho and star fruit and white peach of Alvarinho.  A good thrust of ripe acidity makes for a vibrantly fruity palate. Well done. 12.5%

Another unusual white variety (Jampal) beautifully expressed, despite the polish of oak. It has purity, limpidity and balance, elegant balance to its succulent star fruit and honeydew melon palate.  Lingering, intense finish.

I reviewed this wine earlier on this site, but it’s worth repeating my note not just because it’s a good wine, but also because it’s good to see young winemakers casting their net in the region.  Here it is.  Does the world need another Sauvignon-producing country?  I don’t think so.  But that said, this is a very good example and I’d expect nothing less from the man who describes himself as a disciple of Anselmo Mendes.  It’s crisp, fresh and reassuringly dry with grapefruit, subtle guava notes and mouthwatering mineral acidity. João Maria Cabral says its chief market is Portugal and, with its thermal chameleon label which changes from green to blue as it arrives at the correct service temperature, this sophisticated Sauvignon is aimed at a young generation of drinkers.  11%

Like Colares, a high profile coastal region in the past and one which almost became extinct as a result of property development.  This new brand is the outcome of a municipal collaboration to revive the DOC’s reputation for sweet, fortified wines.  This non-vintage (1995 to 2007) blend of Arinto, Galego Dourado and Ratinho puts me in mind of a moist, sweet, rich honey and almond cake.  It’s not terribly complex, but it’s deliciously smooth, with a lick of sweet’n spicy vanilla.  High tea territory!