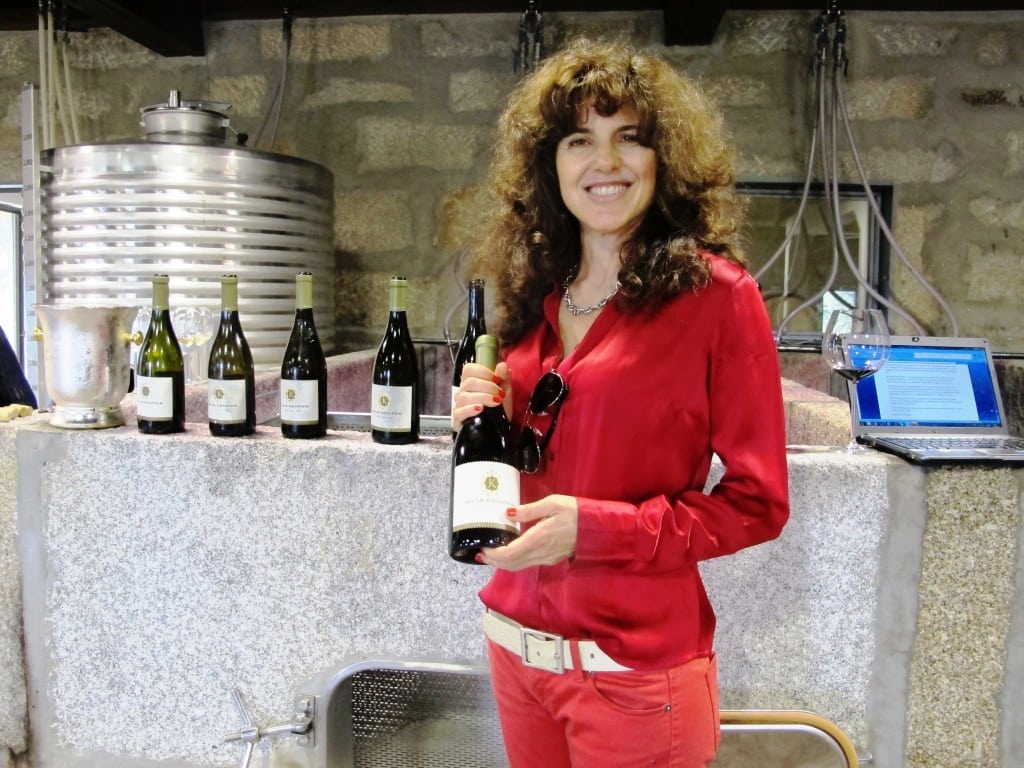 I first met Júlia de Melo Kemper and tasted her wines in March 2011 (my report here). It was immediately apparent that the Lisbon lawyer very much brings her own inimitable style to her white wines in particular. A visit with Kemper at Quinta do Cruzeiro for a vertical tasting last October provided me with an insight into what informs her uncommonly (for the Dão) rich, round (yet subtle, balanced) style.

Quinta do Cruzeiro: the original 1950s winery has been renovated by Kemper

Somewhat unexpectedly, Kemper is generally not a fan of white wines which she finds too aggressive (acidic). So it might be said that she continues the family tradition of making wine for herself (the quinta, which has been in her family for some 400 years, has always made wines for private consumption). Thankfully, she makes rather more of it than her predecessors and shares it!

Quinta do Cruzeiro: 15ha of vines are cultivated organically – here’s the compost

That said in 2013 a deluge resulted in heavy losses – 50% of the Touriga Nacional (the last picked grape). Kemper told me it rained more in one day (26 September) than in the whole year. Her take is pragmatic – “you have to accept that you cannot control nature; maybe it is an opportunity to rethink and spread the varietal risk more.”

Grantic soils with some schist and quartz

Below are my notes of the vertical tasting (all wines certified organic); hand-picked grapes undergo further selection courtesy of the vibrating sorting table before entering into the gravity-fed winery, both pictured below.

Deep golden yellow and, as the colour suggests, this is a nutty, ripe, expansive style with rich white asparagus, spicy, piquant orange peel lift and sweet vanillin oak (the first vintage inevitably saw more new oak). In the mouth it’s soft and round, yet with the freshness to balance and tease out a long, textured finish. Very good.

With its flinty reduction and nip of sulphides, the 2009 has a little more energy to the nose and palate. But the house style comes through strong and true in the mouth which is rich yet balanced with just a hint of warmth on the finish. Flavours of white peach, incipient white asparagus and lemon butter are deliciously distracting, while a backbone of ripe, lemony acidity maintains structure and length.

This wine is from the hottest vintage in a decade. It is significantly paler with green glints and, though it has this Malvasia Fina/Encruzado blend’s signature white peach fruit and vegetal hints, it lacks the concentration or complexity of the other wines in the line up.

With the 2009, my pick of the line up. The 2011 vintage has lovely power and complexity with gently unravelling, round and stony layers of sweet vanillin oak, ripe lemon zest, white asparagus and fennel. The oak lends shape and support, while the acidity is subtle but present. Long and lingering.

I asked to taste another bottle of this vintage. Both seemed uncharacteristically subdued. One to review with more time in bottle (tasted October 2013).

Reds are foot-trodden in the renovated granite lagares (pictured), which are a quarter of the size of the originals for small batch parcel by parcel fermentation.  The mid-weight 2008 Tinto (a blend of 50% Touriga Nacional, 25% Tinta Roriz, 15% Alfrocheiro & 10% Jaen) has always put me in mind of a Loire Cabernet Franc with its rub of tannin, freshness and gravelly minerality. With age its red and black fruits are augmented by signature mature Dão pine needle notes. Holding very well; a very nice drop.

A much deeper hue and weightier, more muscular, on the palate too. For consultant winemaker Vines & Wines’ João Paulo Gouveia (who also has his own estate, Pedra Cancela) the vines reached a tipping point in 2009 where they started to produce more concentrated fruit. For me the bonus is that the minerality really shines through its richer velvety fruit. Lovely vinosity/drinkability (the freshness/balance) with a scent of pine needles and that rub of tannin once again reminding you of the origins of this wine. Very good.

In this hot vintage, the 2010 Touriga is a powerful wine, inky of hue with a rich depth of ripe but bright black berry fruit to its classically floral, violet-scented nose and palate. The finish is notable for its gravelly minerality, coal dust and firm chassis of tannins. Needs time but very promising; purer than the 2009.

This wine is named after NASA’s Mars mission rover Curiosity, hence the martian on the crest above the label. Its significance for Kemper is the connection between the NASA explorers and Portugal’s Dom Vasco da Gama, who was the first European to sail directly to India during the so-called Age of Discovery. This 50:50 blend of Touriga Nacional and Alfrocheiro is deep in colour and fleshy and smooth of delivery on the (gentle) attack, with plums and red and black berry fruits. A quite firm but fine powdery backbone of tannins and fresh, cool acidity makes for a persistent finish with a pronounced undertow of minerality and coal dust and savoury woodsmoke nuances. Good.