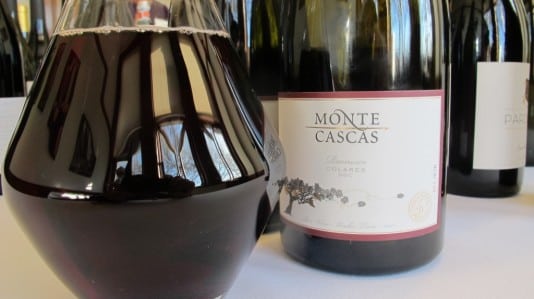 Last time I attended a tasting presented by leading Portuguese wine writer João Paulo Martins (pictured), the theme was forty years of great Portuguese reds 1963-2003. We tasted some stunning wines so I was confident that last Wednesday’s Wine Icons tasting, an adjunct to Wines of Portugal Annual Tasting, would delight in equal measure. And I was not disappointed.

Though Martins pointed out that “Wine Icons” was something of a misnomer where some of the wines were completely new (yet to be launched even), his aim was to show traditional icons alongside potential future icons which, he observed, had been made using classic techniques.

It’s unusual to find single varietal Arinto outside the Bucelas and, for that matter, single varietal wines are a rare breed full stop in the Douro whose tradition is blending. But I must admit that Pedro Garcias has crafted a singularly exciting wine which brilliantly captures Arinto’s terrific acidity, focus and length. Sourcing the grapes from Alijó which, at 500m plus is an elevated, cooler region, most certainly helps. I’m told that the vines are between 20-25 years old and the 2012 vintage is the maiden release. It’s very zesty with ripe lemon, lively, fragrant lime zest and mineral notes. With a tremendous seemingly infinite, very pure beam of acidity, it has extreme line and length. Outstanding. 12.5%  Correction: Pedro Garcias emailed me to correct some of the background information which was provided about this wine at the tasting.  He told me that Secretum is made in partnership with a company called Lua Cheia em Vinhas Velhas. The wine is made with grapes from Murça (not Alijó) – a single parcel of Arinto . It is made by the winemakers João Silva e Sousa and Francisco Batista.

I first tasted this wine last October. It’s made by a partnership of two winemakers, Nuno do Ó & João Corrêa whom you can read about here on the Druida website. Druida is another high elevation wine, this time from the Dão region (vineyard at c 500m). It’s very different from Secretum. Encruzado tends to produce rounder more textural wines. Though it can share Arinto’s citrus and mineral profile it tends to be less pure of expression, with a resinous note, especially with age. In the mouth it’s soft and gently nutty with sweet talc and lemon peel notes – very leesily textural. With good underlying acidity it’s also very persistent; a very natural-seeming wine – makes its own shape. 13.5%

This blend, mostly Encruzado with a dash of Verdelho, reveals sweet vanillin oak, signature Dão/Encruzado pine needle/resinous notes with ripe lemon and tighter knit quince fruit. A well-structured wine with firm acidity which bodes very well for cellaring and, as you can see from this earlier report of an Encruzado masterclass with João Paulo Martins, the variety ages very well indeed.

Readers will know I’m a big fan of wines from the Portalegre sub-region of Alentejo. Especially for white wines its big pluses are elevation, higher rainfall and a beggars muddle of old field blend vines – a combination which persuaded wine writer Joao Afonso to acquire Quinta das Cabeças with its century old vines in 2009. The vineyard in cultivated organically and in conversion to biodynamics. Equinócio is a very unshowy, unpushy (and unpushed) wine. Like the Druida it makes its own shape, revealing white peach and buttered apples on a round, intense, rich yet fresh palate. Lithe (as no doubt is its maker – a former ballet dancer in the Ballet Gulbenkian). 13.5%

Monte Cascas scour the country for interesting parcels so, with its rare parcels of ungrafted Malvasia de Colares, the Colares region was a shoo in. Only 340 bottles were produced of this wine. It’s a complex wine, round and textural but fresh, with hints of mushroom and bosky salt marsh to its intensely stony, mineral palate. Unique. 11.5%

Curtimenta is one of two flagship Alvarinhos made by Anselmo Mendes. It is a powerfully intense Alvarinho which remains fleet of minerally foot and ages incredibly well as you can see from this report of an extensive vertical tasting of Anselmo Mendes’ wines. Curtimeta is a reference to skin contact, which lends peach and apricot skin as well as flesh to the palate – some bite. Very lively and juicy going through, with a touch of green tomato bite and a taut, long, precise, mineral finish – for me, the mark of a great Alvarinho. 13%

It seems remarkable that a Douro vineyard in clear sight of Spain can attain such minerality and freshness. Old fashioned century plus vines interspersed with aged olive trees (which you can see pictured in this report of a visit and tasting at Maritávora) and winemaker Jorge Serodio Borges make sure of that. A tight, flinty, textural nose and palate reveals green olive and saline notes going through. Long, insinuating and very mineral. 13%

As Martins puts it “if you are looking for fresh fruit around here forget it!” And I might add bottle variation can produce its own spin as you’ll see from this extensive report of two vertical tastings of Bussaco Palace Hotel Buçaco Reservado white & red wines. But when they’re good they’re very very good, like this oaky, flinty, tight but ripe lemony 2008 with its vegetal and nutty undertones. Well-focused and long. Very good and unique – an ageworthy blend of Dão Encruzado with Maria Gomes and Bical from Bairrada.

Most likely another Bairrada/ Dão blend. The first magnum was corked and the second lacked purity, though the palate was much better balanced.

Bottle Apostle introduced me to this unusually slick, modern red Vinho Verde, which they sell for £11.25. You could be forgiven for thinking that most Vinho Verde reds are made from Esgana Cão, which translates as “dog strangler” so fearsome are the tannins and acidity. In fact Esgana Cão is a white grape so it has nothing to do with red Vinho Verde other than its name being a good fit! As for this wine, a judicious blend of Vinhão, Pedral, Brancelho and Borraçal together with a super short maceration (with 30% whole bunch) has produced a pale but bright fruited red with creamy red cherry and berry fruit and lively but well integrated acidity. 12.5%

Julia Harding MW selected this wine for her 50 Great Portuguese Wines in 2012 and it has opened up since I tasted it on a couple of occasions that year. An appetising nose puts me in mind of beetroot and fresh grated horseradish – lipsmacking and piquant. It shows crunchy, vivid wild bilberry and red fruits – pomegranate and riper scented red cherry and raspberry. A lingering finish reveals delicious mushroom/truffle undertones. 11%

Alvarelhão is the grape variety, apparently once the most widespread in northern Portugal. Perfumed, silky and medium minus bodied with lifted violet notes, violet chocolate creams and earthier, gamier notes.

Anselmo Mendes consults here producing a Rufete that is way fresher and more concentrated than anything I’ve previously tasted from the local co-operatives who focus on this traditional variety. It’s deep ruby in hue yet translucent with well-defined very fresh red and black juicy berry fruit and a subtle rub of tannins to the finish – very Beira Interior in this respect at least! Very good – like the fruit purity and freshness, plus it’s cheap as chips (in Portugal)!

The # on the label signposts a new, contemporary style of Tejo red which is made from very old 60-80 year old field blend vines planted (unusually for the region) on schist soils. The varieties include Trincadeira, Baga and Castelão, the latter of which really stands out to me on a jammy, sweet raspberry jello palate. Seemed a little simple to me? Certainly in this line up.

Planted on granitic soils in the Vidiguera this is a really characterful red (apparently the only single varietal Tinta Grossa on the market, which is sourced from 35-40 year old vines). Quoting a fellow Portuguese importer it’s positively “violaceous” – quite headily floral on nose and palate, with peppery lift too and darker, deeper bitter chocolate notes well balanced by sweeter cinnamon. Lots going on! Textured tannins anchor these flavours through the finish. Very good.

I believe that this Baga red is wholly made by Nuno do Ó, who jointly made Druida (above). It’s a very firm, pure expression of Baga, with its fine powdery but punctuating tannins as clipped as its maker’s surname. Like the 2009 which I tasted in December I like its wrap around fruit-sluicing acidity though, overall, I found both a little dense/solid compared with the best.

This aged Castelão has a sweet toasty nose. Not oak toast, rather a developed toastiness which follows through on the palate together with dried fruit and the variety’s signature (when mature) chocolate notes. Thought it’s dry and a tad austere on the finish it’s not at all dried out with a fresh, clean finish. I reckon a tribute to its limestone soils. Not bad for a volume production 100,000l brand!

My wine of the tasting. So pale. So delicate. So Colheita Tawny. Soooo balanced, with no elbows or kick of spirit. An elegant, seamless delivery of sweet if fading dried stone fruits with cafe crème and gently nutty almond macaroon lift. A sigh in a glass. Delicate but intensely felt.