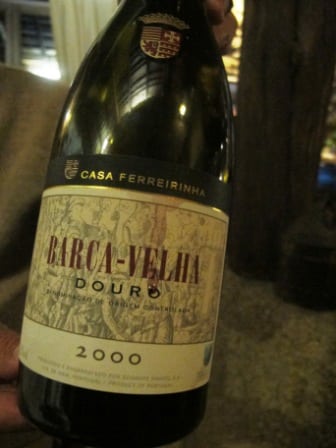 I’ve been in Portugal since Sunday. First in Monção e Melgaço, Vinho Verde’s northernmost sub-region, which is the epicentre of Alvarinho.  Since Tuesday, focused on the Douro Superior, the region’s easternmost sub-region.

The pace has been fast and furious and, though I’ve been tasting some brilliant wines and snapping pics hither and thither, I’ve only managed to post a few tweets and zilch on the blog front.

There’s lots to share,  but I felt particularly lucky last night to be presented with a slice of history over dinner in the form of Portuguese icon Casa Ferreirinha Barca Velha 2000 and 1982, followed by Sandemans 1955 Vintage Port.

We had two bottles of each of the Barca Velha vintages and, with Salvador Guedes (President of Sogrape Vinhos) to my left and Luis Sottomayer (Sogrape’s Chief Winemaker) to my right, opinions were divided as to which showed best or, at least, which was the preferred bottle – in each case, one more evolved than the other.

But we were splitting hairs.  Fabulously complex, all four commanded my absolute attention, and received it.  With its charge of ripe and dried (concentrated, not raisined) red fruits with incense spice and woodsmoke, the 2000 was a powerhouse, still very youthful with the balance of ripe but present tannins and fresh acidity to go the distance.  And, as the 82s showed, the distance is not inconsiderable.

I preferred the more evolved of the 82s – so savoury and intense, a wave of of oystershell, spice and dried red fruits followed by a cascade of incense, iodine, earth and mineral notes, the whole still remarkably fresh, fine and balanced from start to long, long, really long (echoing) finish. Ripe but present with good sucrosity, the tannins were not in the least drying. 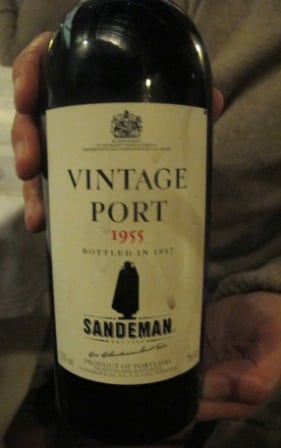 Though deep mahogany in colour, fiery and spicy in equal measure with lashings of brown bootstrap liquorice and mocha and macaroons notes to the finish, the 1955 Sandeman Vintage Port showed great vigour.  Very much alive and kicking!

Today I’m visiting Quinta da Leda, the home of Casa Ferreirinha, so I’ll post my notes on the range later. For now, I’ll just flag that Sogrape have just lauched a new wine, Casa Ferreirinha Papa Figos 2010, which sits between the Esteva and Vinha Grande brands.

Also the highly successful “especialidade” Casa Ferreirinha de homenagem a  Dona Antónia 2008 is to be followed by the 2009, a wonderfully polished wine.