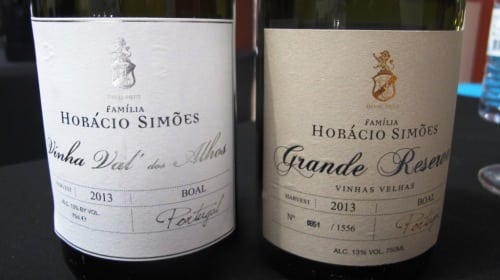 I’m looking forward to showing Barbeito 10 Year Boal Madeira at tomorrow’s Iberian Nights at Trangallan – join us if you can!  It’s perhaps my favourite of the big four noble white grapes (Sercial, Verdelho, Boal and Malvasia).  Still, I wasn’t expecting to encounter it last week in Lisbon where I was tasting table wines from the mainland.

But I should know better.  Portugal is always full of surprises and, around Lisbon, obscure single varietal relics seem to surface all the time – Manz’s Jampal,  Casal Figueira’s Vital.  Based in Península de Setúbal just south of Lisbon, Horácio Simões are best known for their stunning range of Moscatel de Setúbal but, as I’ve now discovered, they also make two very interesting Boal white wines from a century old vineyard called Val’dos Alhos in Palmela.  On the mainland this grape is also known (confusingly) as Malvasia Fina (and commonly features in Douro and Dão blends).

This has old vines stamped all over it.  Fruit is not the star of the show – there’s a whole heap more going on in and around it’s lemon peel and quince – orange blossom/exotic tangerine/bath salts lift, a cheeky menthol riff too – hot yet cool, like a peppermint tree.  The whole is gracefully delivered on a very balanced, even, muscular but lithe palate.  Very singular and far from consensual, but I loved its chatter.  And chatter it did over three days during which it held its shape and intensity very well indeed.  Just 1540 bottles made; it was fermented and aged for four months in French oak. A personality in a glass.  13%

This wine evidently spent longer in oak and, I must say, this together with its pillowy lees (batonnage??) detracted from the raw material which, as you can see from my first review, I rather enjoyed.  Though you can sense the old vine muscularity and minerals behind the oak – dancing peppermint tree too – even on day three the oak is both frame and picture.  1556 bottles.  13%