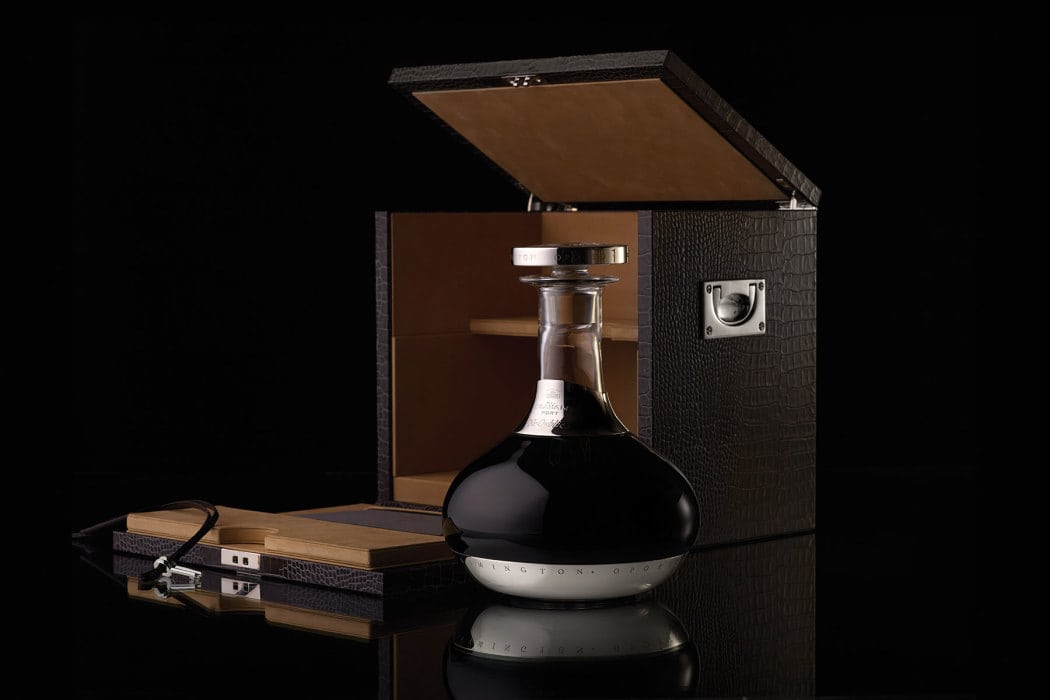 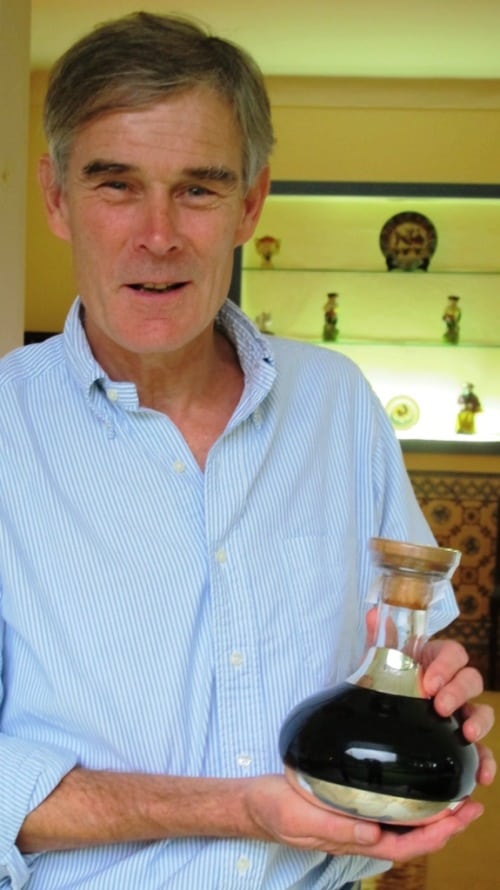 It seemed strangely appropriate to taste Graham’s Ne Oublie in the midst of a raging storm – thunder, lightening, rain like stair-rods.  First, because it’s an electric Very Old Tawny – I’d venture to say, the most complete wine I’ve yet tasted from this ultra niche but growing luxury Port category. Second, because it was produced well before the advent of electricity in the Douro. 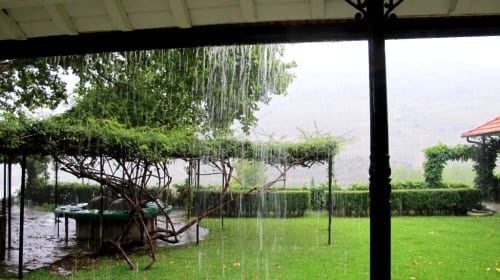 If Paul Symington flinched as the lights flickered ominously at Quinta do Bonfim, whose brand new winery is processing the current vintage, imagine what it was like in the 19th century with no temperature control.  And this is what makes Ne Oublie’s clarity and brightness all the more remarkable. 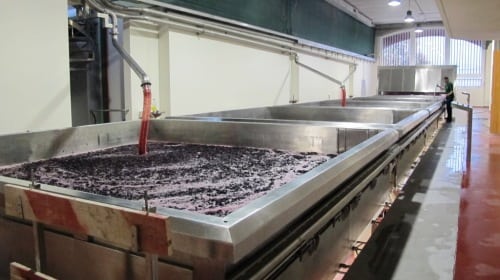 Ne Oublie’s 656 decanter “bottles” hail from one of four casks which Symington’s great grandfather, A.J. Symington, acquired from a Pinhão farmer in the 1920s.  Dating back to 1882, the casks commemorated the year of his arrival in Portugal to work for W&J Graham’s which, as you’ll see, was a momentous period of his life. 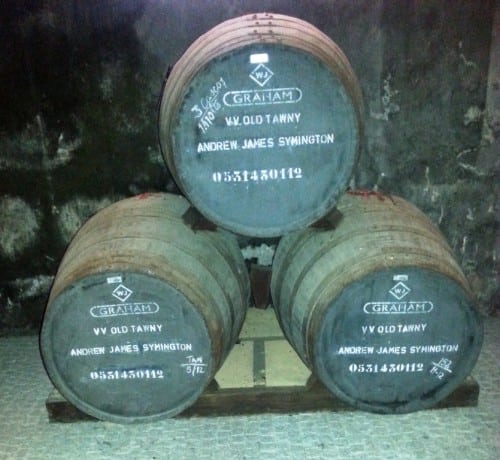 And then there were three – A.J.’s three remaining casks

With remarkable acuity – clearly a family trait – by ox cart then boat A.J. (as the fourth generation affectionately call him) despatched these barrels from the Douro Valley to Vila Nova de Gaia.  Here, they benefited from the Atlantic’s cooling, humid influence (the ocean is just 2.5km away from Graham’s Port Lodge).

For Symington, this accounts for Ne Oublie’s beauty over power.  A quality which, he adds, together with its precision distinguishes it from those fuller, more concentrated Very Old Tawny Port releases which have been aged in the hotter, drier (more evaporative) climes of the Douro.

Nonetheless, as Johnny Symington remarks in a very evocative video which celebrates the release of Ne Oublie, “keeping a wine like this is almost frightening.”  So why, I ask [Paul] Symington, has the fourth generation left it to the fifth and sixth generations to bottle the remaining two casks?   It seems a somewhat extreme method of keeping them on their toes!  (In case you are wondering the fourth cask was eked out in tiny amounts by Peter then Charles Symington who used it for blending in Graham’s 30 & 40 Year Old Tawny Ports, also for topping up the other three 1882 barrels).

Symington replies it was an easy decision where Ne Oublie’s emotional pull “has brought the family together” and, in his opinion, “a family working together is unbeatable.” He is all too aware of estates such as Quinta do Noval, Croft and Sandeman which have been lost to families in less than happy circumstances.

What’s more, his family has only recently found out about the vicious, protracted custody dispute which Symington now believes led A.J. to quit Glasgow never to return and set down permanent roots in Portugal at the tender age of eighteen.  As he puts it, 1882 was a pivotal turning point not just for A.J., but the entire Symington family (and, it might be said, Port lovers worldwide).

It’s quite a story which Symington relates with great admiration for his great great grandmother. When A.J was eleven, his father defied a landmark decision of Scotland’s Court of Session to give custody of the couple’s five children to their mother, doughty Shetlander Mary Edmonston.  On the eve of the decision he snatched his children, fleeing to New England where a dogged Edmonston tracked them down with the help of a private detective.   The children were reunited with their mother in Scotland but, following her husband’s appeal to the House of Lords, he was granted custody of the boys in 1876; once again, the family was torn apart.

It certainly puts into perspective A.J.’s desire to commemorate the year of his arrival in Portugal, moreover the evident care with which the barrels have been tended for over a century.  Symington tells me that the casks have never been touched up and would have been racked, cleaned and topped up from the fourth cask annually.  Going forward, one of the two remaining casks will be used for topping up the other (keeping it full) to limit oxidation, evaporation and maintain the integrity of the Port (although according to Symington, when a Port is this old, the rate of evaporation slows down to well below one percent a year).   It also helps, he observes, that the casks are located right next to a tank of running water which keeps the area humid and reduces evaporation. 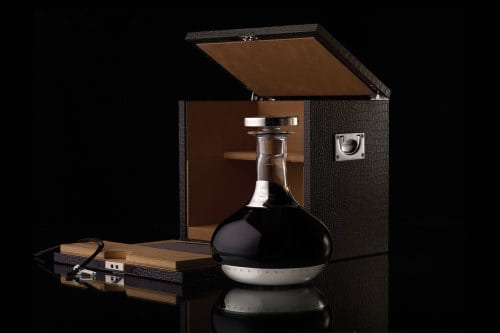 As for the just bottled Ne Oublie cask, it has been bottled handsomely and, as befits a “mongrel family,” (Symington’s description I hasten to add), the box is English (Smythson of Bond Street), the decanter, modelled on a classic ship’s decanter, is Portuguese (handmade blown crystal from Atlantis) and the silver neck collars and coasters are Scottish (Hayward & Stott).

Priced at 5500€ Symington stresses  it’s not for everyone but asserts “I feel very strongly if a region such as ours doesn’t do things at the same level as Cartier etc then we accept we’re not at that level.  Like Champagne, Burgundy and, Malt Whisky, the Douro needs to make wines for every style, including something at the very top.” 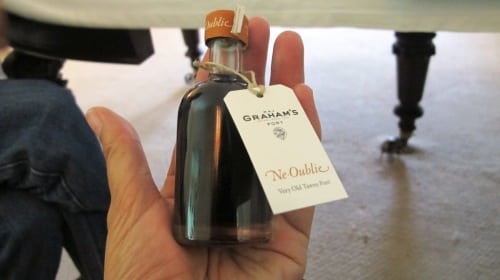 My kind of hip flask!

Incidentally Ne Oublie, which means do not forget, is the original Graham’s family motto.  I shall certainly not forget tasting Ne Oublie and this empty sample bottle shall join other memorable bottles in my study. Here’s my tasting note.

Deep tawny with a saffron rim.  Both nose and palate are very deep.  It takes a while to unravel first revealing ripe, round, dark walnuts and black cardamon.  And then, as its sweetness intensifies, layer after lingering layer of delicious, unbelievably silky layers of honey, spun sugar caramel, sweet orange zest, dried apricot, marzipan and nutty almond tuile. For me most exceptional of all is its seamless integration of sugar, acid, fruit and wood.  There’s not a hint of drying out, dustiness (the white noise of old wood) nor any trace of volatility.  Which gives it fabulous clarity of expression.  An outstanding, extremely drinkable Very Old Tawny Port which lingers long on the palate and, for sure, in the memory.