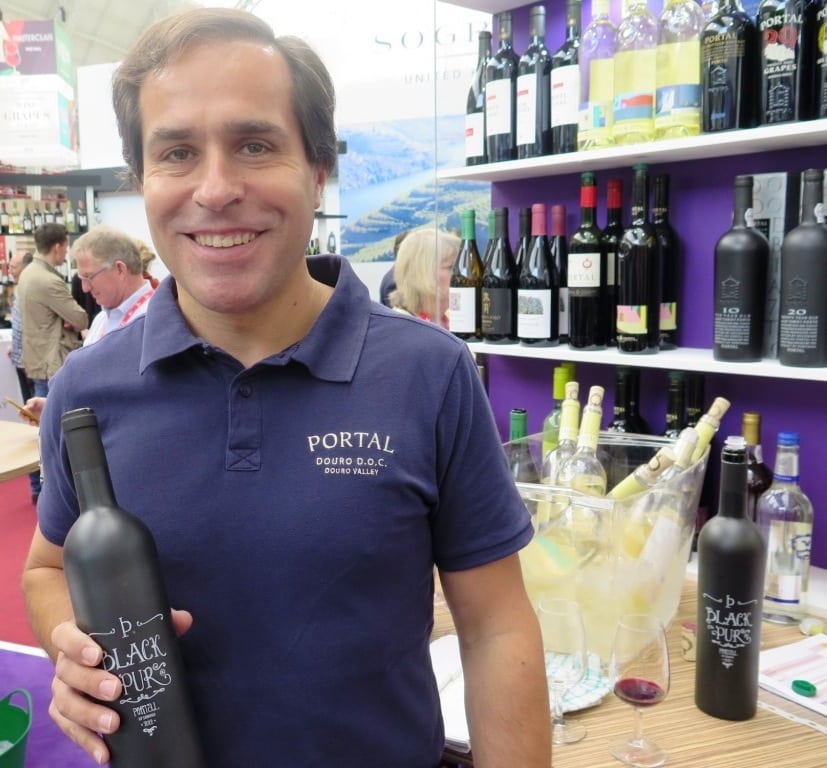 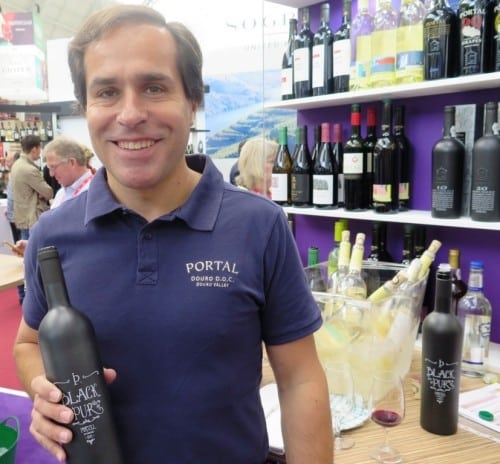 It doesn’t look Portuguese, the name doesn’t sound Portuguese, nor does Black Pur taste Portuguese, but this Malbec/Cabernet Sauvignon blend comes from the Douro (and is labelled Vinho Regional Duriense by reason of its varietal composition).  Though Christian Seely’s disdainful retort about Douro Cabernet Sauvignon (“it stands out like a vulgar Amercican tourist”) rang in my head as I tasted it, I have to admit I liked Quinta do Portal Black Pur 2012 (just as I liked Seely’s Quinta da Romaneira Petit Verdot). It’s got terrific varietal character, which cannot always be said of French grapes grown/vinified in Portugal.

So what’s the story?  I met up with Pedro Mansilha Branco (pictured), whose family own Quinta do Portal, at London Wine Fair to find out (and, of course, taste the wine!)  I completely forgot to ask him why they called this blend of 67% Malbec 33% Cabernet Sauvignon Black Pur, but here’s the substance.

The Malbec comes from Portal’s highest vineyard Quinta da Abelheira, where the Mansilha Branco family planted experimental vineyards with different varieties.  It is located high up on the plateau of Pinhão Valley at an average altitude of 550m, south of the village of Favaios (which is famous for its fortified Moscatel – check out Wednesday’s post on a Decanter gold medallist for an excellent example).  Though not quite up there with Mendoza’s vineyards at 800-1500m, it’s high for a Douro red.   The Malbec is a Johnny-come-lately variety – Black Pur hails from the first fruit of tender three year old vines.  The Cabernet, on the other hand, is from a lower vineyard nearer Pinhão and, perhaps inspired by Portal’s former consultant Bordeaux’s Michel Rolland, it was planted some 20 years ago.

Both varieties got the full Douro treatment and were fermented in small lagares then aged in seasoned casks until bottling in December last year.  Here’s my note:

This inkily youthful, very primary, fresh wine exudes vibrant, perfumed blueberry, black cherry, berry and currant with hints of violet.  Fine tannins and fresh acidity put the emphasis on the lively fruit and make for a very fluid, persistent wine.  So fresh and well defined that it’s hard to believe it has 15.3% alcohol.  I guess that’s the inevitable outcome of the high altitude Malbec, which was picked on 5 October!  Only 1200 bottles were produced, half of which have been pre-sold in Portugal.  Beyond Portugal I suspect its reception will be trickier because it will face huge competition, especially with an expected retail price of £38.00.  At this price, though I think this very polished red has great immediacy and freshness of fruit, I’d expect more complexity.