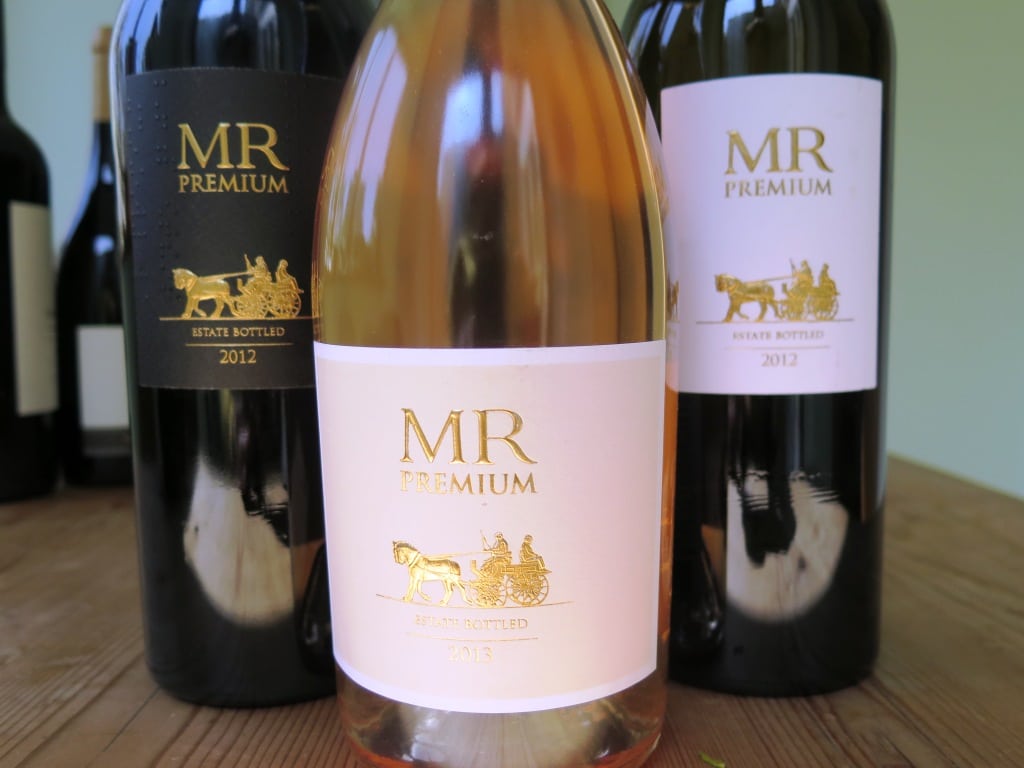 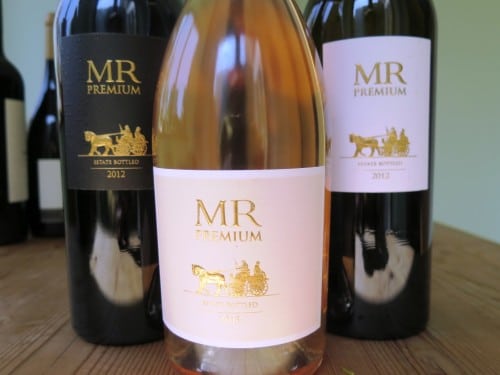 Monte da Ravasqueira in Arraiolos, Alto Alentejo, has been linked to the José de Mello family for several generations.  Grupo José de Mello is one of Portugal’s biggest corporate groups so, while the family’s foray into winemaking is very recent (the first wines were made in 2001), the ambition and resources behind this relative newcomer were plain to see when I visited in 2012.  And I’m pleased to say, not just in the state-of-the-art winery (modelled on Napa Valley’s finest).

Chief Winemaker Pedro Pereira Gonçalves’ adventurous spirit has seen him work vintages at Hardy’s in Canberra with Alex Mackay (now of Collector Wines), with Kumeu River and Trinity Hill in New Zealand and Concha y Toro, Chile.  I imagine that the de Mello family jumped at the chance to appoint him when Vale D’Algares, where he had been Chief Winemaker for six years, ran into financial difficulties.  The exciting, high end Tejo project revealed Gonçalves’ ability to coax impressive performances from tender (young) Viognier and Alvarinho vines such as Vale d’Algares Seleccion White 2008 which I selected for My 50 Great Portuguese Wines 2010.  Varieties which are now planted at Ravasqueira where, in 2012, precision viticulture (including infra-red technology) was first deployed to differentiate between individual terroirs within the same vineyard blocks.  This tool for optimising varietal selection and picking dates made it all the more interesting to catch up with Ravasqueira’s latest releases from 2012 and subsequent vintages.

Although Ravasqueira’s single varietal range (Petit Verdot, Touriga Franca, Syrah-Viognier and Nero d’Avola, all 2012) failed to make their mark on me I found a lot to like – more intensity, interest and better balanced oak – in the Premium range.  Bigger picture, all the wines impressed with their freshness, which can be challenging to retain in Portugal’s south.  When I visited I was told it’s a product of the estate’s very pronounced diurnal temperature variation.  Apparently day and night time temperatures can vary by as much as 15-20 degrees thanks to elevation (slopes rise to 270m), the surrounding forest and dams. With a longer veraison and ripening period, the grapes develop more polyphenols and retain acidity better; good for aromatics and structure then.  Though supplemental irrigation is required, clay-limestone soils have good moisture retention while granite outcrops seem to enhance minerality/freshness, as in the Dão.

Here are my notes on the Premium range and my best of Ravasqueira’s blends:

This blend of Viognier, Alvarinho, Semillon and Arinto has a hard phenolic note to the nose and palate but, with time in glass, it dispels leaving the focus firmly on bright citrus, green mango and creamier peach fruit, the whole cut with fresh, sherbetty even, acidity. 12.5% 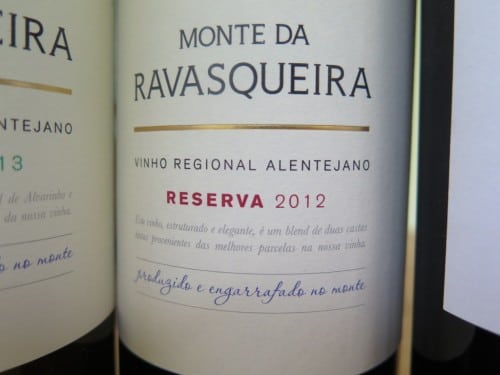 A blend of Touriga Nacional (54%) and Syrah (46%) 60% of which was aged for 12 months in new French oak barrels. Very attractive freshness and persistence to its juicy red and black cherry and berry fruit; hints of warmer baked cherry/cherrystone, membrillo spices and toast add depth and layer.  Fine but present tannins underscore its elegance and fluidity.  Lovely levity and length. 14% 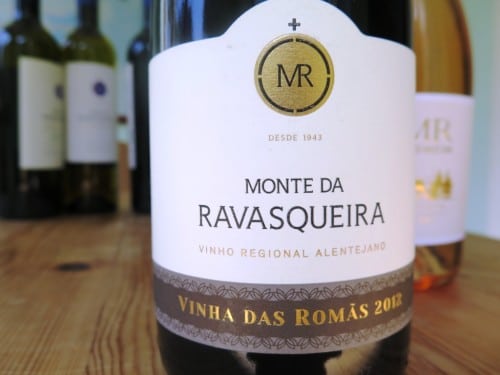 Vinha das Romãs means vineyard of pomegranates, the fruit to which this 5 hectare parcel was planted until 2002 when it was replanted to Syrah and Touriga Franca.  The plot is vinified and bottled separately because it produces particularly ripe, concentrated grapes.  In 2012, the blend comprises 70% Syrah and 30% Touriga Franca which was aged for 20 months in new French oak barrels.  The nose is very savoury, with a spicy (bay leaf), menthol (eucalypt) edge; more spicy than menthol.  Its savoury, dry profile is affirmed on the palate by dry (not drying), pithy tannins (quite different from sweet oak tannins, which are not in evidence despite 100% new oak).  Juicy blackberry and blood plum bring animation and pace going through, while toast, membrillo spices (cinnamon, clove), liquorice and iodine add complexion and interest.  On day 2 it remains equally intense; I like its freshness and dry, firm, pithy profile very much – there’s definitely still something of the pomegranate about this intriguing wine!  13%

This best barrel selection  of Viognier, Alvarinho, Semillon, Arinto and Marsanne is aged for a year in new barrels “in total rest, without influence of any external factor and with complete freedom of evolution.”  Key to its tight but textural, funky style is the fact that each barrel comprises the last 225 litres of the stainless steel vats in which the wine was fermented, in other words, the most turbid juice with a high solids (lees and grape compounds) factor.  It’s a mighty complex package – very intense – with cedar and resin to the nose and a rich layers of ‘flesh’ – honeyed pineapple, nougat, honeycombe, creamy lees, orange and salted lemon peel and pink grapefruit – surrounding its firm citric backbone.  Plenty of mouthfeel, texture and length with an attractive cheesiness to the finish, that resin note too.   On day 2 it had the chutzpah to work brilliantly with a favourite Ottolenghi dish of fried cauliflower and tahini with smoky freekeh on the side. An unusual white wine, not for everyone, but to my mind a good (textural) direction for Alentejo. 12% 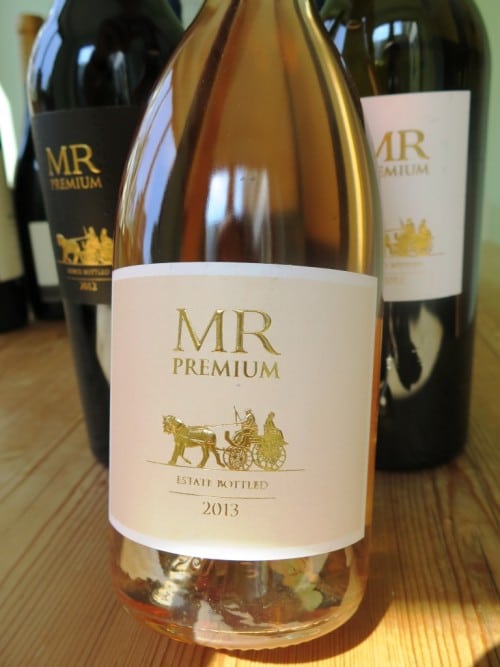 Touriga Nacional seems to lend itself well to rosé wines and this is an unusual example, savoury yet fruity, round, yet fresh.  While the equally unusual Premium White is a bit of a marmite wine, I defy anyone not to find this pale rose gold rosé dangerously drinkabl.  It’s thoroughly delicious with savoury, creamy lees, delicate wild strawberries, strawberry shortbread and refreshing peach tea.  Mineral acidity brings freshness and persistence to its lingering finish.  Complex and very food friendly, it’s perhaps unsurprising that the winemaking process sounds so involved.  Three of the five parcels of Touriga started fermenting in tank before being transferred to new barrels, while the other two were pressed directly to barrels and naturally fermented.  The wines were aged on lees in barrel for 6 months with batonnage during the first 2 months. 13% 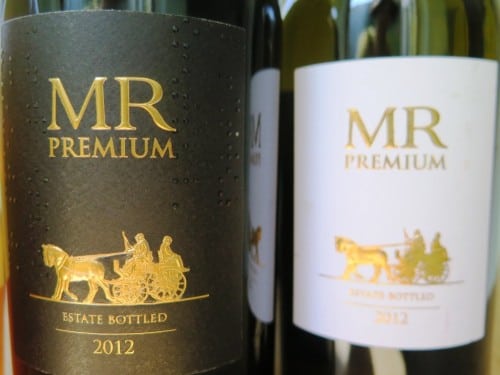 Taking advantage of precision viticulture zoning, this blend of Syrah, Touriga Franca, Touriga Nacional and Aragonês varieties is produced solely from those vines which presented clusters with smaller (more concentrated) berries – 4,200 vines out of a pool of 150,000 apparently.  The resulting wine was aged for 22 months in new French oak barrels which, in contrast with Vinha das Romãs, makes its presence felt both on day one and two. Beneath this veneer of savoury, creamy oak the fruit is fresh and precise, dark and spicy with liquorice, star anise, clove and cassia bark notes aplenty. I pick up some dried fruit notes too – fig and incipient leather.  Lots going on here, including the mineral, almost medicinal iodine note I found in Vinha das Romãs.  Pithy, ripe but very present tannins and firm, persistent acidity frame and provide thrust for a long, extended finish.  I suspect this wine has a long life ahead and will reward another year or two in bottle to allow the oak to integrate.  Powerful.  14%