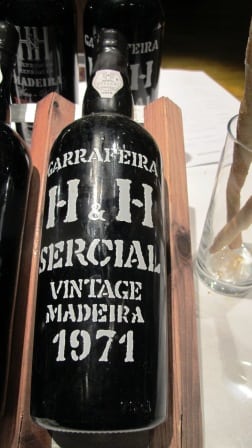 Henriques & Henriques Sercial 1971: like being slapped in the face by an ocean wave. Resoundingly.

You learn something new every day. I had no idea that Portugal (in the shape of Catherine of Braganza, the queen-consort of Charles II of England), was responsible for tea becoming fashionable in the UK. Humberto Jardim of Madeira’s Henriques & Henriques put me in the picture at importer Mentzendorff’s tasting last week. The UK Tea Council write about the influence of Charles II and his wife Catherine of Braganza on the British trend for drinking tea here.

I suspect Jardim’s own tastes are more aligned with those of Michael Broadbent who confessed to his liking for “Malmsey in the afternoon, better than tea” at a pre-auction Christies’ tasting I attended some years ago.

And if coffee is your poison I reckon Madeira’s super-stimulant, a.k.a. its bracing Sercials, are for you. Jardim showed me a fabulous example from 1971 – here’s my note:

Wow this sings out the glass and soars on the palate. An invigoratingly, piercingly fresh nose and palate reveals iodine, kelp and sea spray. With its bracing backbone of acidity there’s no shortage of power or animation – it’s rather like being slapped in the face by an ocean wave! Resoundingly. A tightly-wound nutty finish sprints into the far distance, showing a clean pair of heels on a very pure, mineral, firm finish. Terrific! Or, as Rui Falcão would say, bottled electricity. Hard to believe this seemingly dry wine has no less than 55g/l of residual sugar. £190 at The Wine Society who, news flash, last night most deservedly scooped the Association of Portuguese Wine Importers Online Portuguese Wine Merchant of the Year for the xth time!