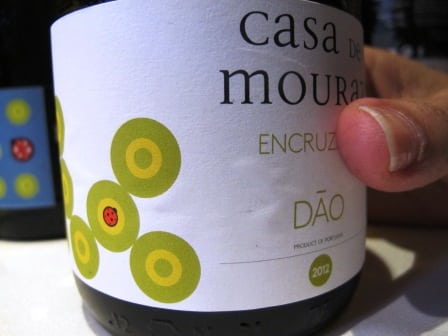 Catching up with the organic wines of Casa de Mouraz & alr

Granite boulders, greenery and rain – it’s got to be the Dao! Sara Dionísio of Casa de Mouraz climbs up to take a peak at the Pego vineyard

Next Friday I’ll be shooting over to Oporto for a quick stopover visit. My destination? Simplesmente Vinho’s 2014 tasting of terroir-driven wines, a fair few of which are made from organically or biodynamically cultivated vineyards.  Probably the first organically-labelled Portuguese wines which I encountered were produced by Casa de Mouraz. Launched in 2000 and made from fruit which has been certified organic since the mid-90s (some of which is now cultivated biodynamically), the Dão brand is the creation of husband and wife team António Lopes Ribeiro and Sara Dionísio.

And here it is: Casa de Mouraz’s Pego vineyard

And, as the Casa de Mouraz labels suggest (below), the couple are creative types. Though Ribeiro studied law he eschewed a career in law in favour of editing Heart, a Lisbon art magazine. In this context he met Sara Dionísio and, one year later, Casa de Mouraz was born!

The heart of the brand is Ribeiro’s family vineyards which, in true Dão style, comprise a patchwork of small parcels which are dotted around the house where Ribeiro was born near Tondela, in the south and west of the region. The couple own 10 parcels and additionally rent five old vineyards which are differentiated by soil (granite and clays predominant), altitude (140 to 400 metres), aspect (mostly sunny) and vine age. The most important varieties are Touriga-Nacional, Tinta-Roriz, Alfrocheiro, Jaen and Água-Santa for the reds and Malvasia-Fina, Bical, Cerceal-Branco and Alvarinho for the whites.

When I visited one rainy morning last October (not the best vintage conditions) Dionísio took me on a vineyard tour. As we bunny-hopped through granite-hewn villages in a knackered old van (only two gears worked!), there was plenty of time to pick out abandoned parcels of old vines. It seemed a shame they were not being cultivated given the region’s high-quality potential but, Dionísio explains, with a strong culture of attachment to the land – “an emotional connection to one’s place of birth” – owners (typically elderly) are reluctant to sell. She adds “for Antonio’s parents, the land is a part of them. Selling it would be like selling a part of themselves.”

The lure of the land has evidently worked its charm on the couple too, who left Lisbon for Dão in 2002. They have planted a new vineyard, Pego (pictured top) among the pine, oak, chestnut and cork groves. There are plans to build a new gravity fed winery on a slope among the trees by another vineyard. A fan of biodiversity, Dionísio says “it’s easier to be organic and the wines are more complex when the vine roots can communicate with roots from other trees.” No doubt the trees and year-round grass mitigate the richness of the granite soils, keeping yields in check where Dionísio observes, “if we wanted, we could have big volume.”

While quality over quantity is the mantra for each wine, the couple have a sizeable range which has been augmented by the alr brand which they introduced in 2006. Short for António Lopes Ribeiro, the alr label is a multi-regional brand comprising a red wine from the Douro (sourced from two organically certified vineyards), a Vinho Verde from a single organic vineyard in the Lima subregion and an Alentejo red now being sourced from certified organic growers). The wines are made by Ribeiro in conjunction with hands on winemaker César Augusto Fernandes and, across both brands, I detect a common thread of freshness and purity. These are unworked, very food-friendly, juicy wines which offer wine lovers good value for money given their complexity and interest.

Our tasting focused on the 2011 and 2010 vintages the former of which was hotter. It showed with the whites (which was interesting given that the Tondela region is particularly known for its whites owing to its cooler westerly location). Tondela is also home to the terrific traditional restaurant Os Três Pipos where we tasted the wines before enjoying a fabulous lunch. The thick stone-walled building was formerly a winery, hence the name.

Below are my notes, preceded by a pic of Os Tres Pipos’ delicious salt cod fritters:

Mostly from the Pego vineyard and predominantly a blend of Malvasia Fina, Bical and Sercial. An attractive fruit driven wine with ripe, round stone fruits and an incipient, very subtle oiliness (texturally), but it has good freshness. Well made.

A multi-varietal blend from several parcels with a nutty edge and orange peel notes to its fresh but fleshy, round white peach and apricot fruit. Lovely. 13.5%

From a hotter year, this is showing nice development – those nuttier notes segueing into marzipan/calisson. Attractive texture and profile with a still fresh core of stone fruit. 13.5%

A lovely example of this the Dão’s lead grape variety. The Encruzado comes from two old field blend (mixed variety) parcels (around 20 years old and 40 years old), so the Encruzado is selectively picked. It’s very pure, clean and mineral with a subtle pine needle riff. Great balance too, with a mineral, gently rolling acidity. 13.5%

Again the hotter year (and very low yields) show with a more developed resinous, nutty profile, though it has a lovely underlying minerality. I’d have liked to have seen a touch more acidity. 13.5%

Very tight furled with flashes of quince and minerals to its well-structured, textural and fresh palate. Very nice concentration and length. Very promising. 13.5%

Apparently the rose isn’t the easiest of sells, but it’s an attractive, easy going dry style with a lick of herbs for interest. Turkish delight pink it has a creamy palate of raspberry and strawberry fruit and is made from Touriga Nacional, Tinta Roriz, Alfrocheiro, Jaen and Agua Santa (a grape variety which is thought to be a hybrid of Camarate and Castelao). 13.5%

Elfa is the old method of (rather randomly) hand planting each vine and this wine, as you’ve probably guessed, comes from an old hand planted vineyard. It’s a very lively, perfumed wine (the only unoaked red) with ripe but vivid pomegranate, sweet-scented blueberry, tighter bilberry fruit and a hint of red cherry/ cherry lip confectionary. Pithy tannins – a grapefruit pithy quality – make for an unusual red, but I like it. Dionísio confides initially they put it in tank because they didn’t like it very much, but then it grew into itself and hey presto! 14%

A very digestible, pure wine with juicy, very perky black plum, wilder fruits of the forest and a lovely mineral-sluiced, fresh finish. With fine tannins, this is an elegant red. 14%

The 2010 has a more savoury edge with its linger of day old woodsmoke and a salty, piquant note to its pretty red and black fruits. Fine tannins and fresh acidity make for a persistent finish. Nice. 13.5%

A deep hue, with a floral nose and palate and well concentrated vivid black fruits (bilberry and black currant, with a hint of leafiness). Ripe, yielding tannins lend volume and palate presence. Fresh but integrated acidity makes for a lingering finish.14%

Just off dry this is a pretty Vinho Verde made from a blend of the Loureiro (predominantly), Trajadura and Azal grapes. It’s very floral, fresh and pure with lively fruit (apple and grapefruit) and a slatey minerality. Very good. 10.5%

This label is made for US and it is made from the first pick, which has higher residual sugar (around 17g/l). It’s a lovely wine, even prettier than the former with its elderflower florality, shimmering quartz minerality and judicious thrust of balancing grapefruity acidity. 9.5%

Showing a little more development with a hint of petrol to its lime blossom nose, which notes follow through on a honeyed, limey, slatey, quite Riesling-like palate. Lovely persistence and vitality. 10.5%

A blend of Alicante Bouschet, Trincadeira, Aragonez and Touriga Nacional, only a small amount of which sees (older) oak. With its bouncy, sweet ripe red and black fruits and smooth tannins Dionísio marvels at this wine’s ready appeal. Contrasting it with the Dão she observes “it’s impossible to have a wine like this from the Dão which is drinking now.” It undergoes the ferment and second malolactic so quickly she says “we could bottle it in December if we wanted while in the Dão, the malolactic fermentation takes until the following summer to complete because the region is colder than Alentejo.” Still, it retains an admirable juicy freshness. Really well made – like to see the whole fruit and no residual sugar or oak. 14%

The Douro wine is labelled with Ribeiro’s full name (not his initials) because Dionísio says they see it as different from the alr pair. It is an unwooded red blend, fermented in lagares and though its fruit (fruits of the forest) is quite creamy, with lovely freshness and line, it very much strikes me as a Douro wine made by Dão producer. A Douro saltiness to the finish reminds you of its region of origin. A very well made vivacious, direct style with fine grained tannins to its fresh-faced finish.