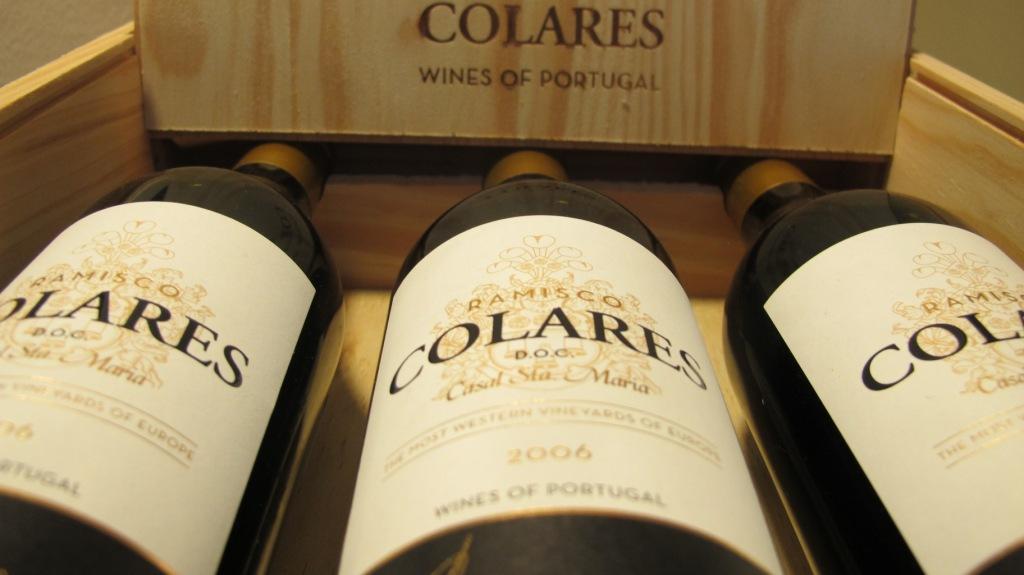 In need of inspiration for New Year resolutions?  Take heart from Baron Bruemmer who, aged 96, founded his first vineyard.  Now 103 and still going strong, he produces a Ramisco and Malvasia Fina from the historic Colares DOC as well as thoroughly modern Lisboa wines from native and French grapes.   Who dares wins!

I visited last September and swiftly wrote up the Chardonnay, one of my October Wines of the Month and, indeed, one of my (great and good) surprises of the year.  You’ll find my highlights from Casal Santa Maria’s eclectic, very interesting range below but, first here’s a bit of background on the man and the mountain which informs Casal Santa Maria’s fairly unique microclimate.

Born in 1911 in Livonia, one of the former Baltic Russian provinces, Bruemmer’s family fled to Germany in 1918 when the Republic of Estonia was established.    The family led a peripatetic existence and, 15 schools later, Bruemmer settled in Zurich where he made his fortune in banking.

Keen to set down permanent roots in 1962 he acquired Casal Santa Maria, then in ruins, and restored the 18th century manor house.  Though the estate had produced wine until 1903, for many years Bruemmer pursued his passion for Arab horses, establishing Portugal’s largest Arab stud farm at the estate.  It was only in 2006, waking up from a complicated operation, that Bruemmer spontaneously decided to make wine and, so the story goes, three weeks later, the first vines had been planted! Next to the house the main vineyard overlooks the Atlantic

Today Bruemmer has three vineyards – five hectares around the house, 2.5 hectares near the beach and one hectare on the slopes of Serra de Sintra – the sturdy granite mountain (a hill in reality) which saved the manor house from Lisbon’s 1755 earthquake.  Located between the Atlantic Ocean and the Serra de Sintra, Casal Santa Maria is Europe’s westernmost vineyard and has a very particular terroir.  The ocean creates cooling humid mists and afternoon breezes which are trapped in by the the Serra de Sintra.  At night, it is cool too so, unsurprisingly, the wines share a very crisp, vibrant acidity.  The proximity of the ocean brings an attractive saltiness to the wines too.  It’s a great terroir for white wines in particular. 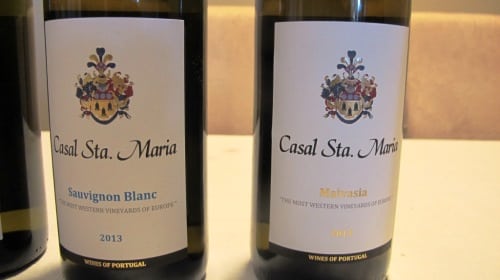 This cool fermented unoaked Malvasia comes from vines planted on sandy (80% )/clay (20%) soils.  It was aged for six months on lees, the first three with batonnage.  It’s a highly characterful wine, with spicy lime pith and piquant salty, vegetal notes – I’m reminded of tasting salt bush on a bush tucker tour in Margaret River.  Like it!

The Arinto grapes for this wine are sourced from the end of the valley where the morning mists linger longest.  There’s not much sun and, facing north, the vines/wines pick up a salinity from the ocean.  It’s a very zippy, tight, lime-driven Arinto, with firmer pithy and (unripe) green notes.  Quite austere; needs time.  One to review.

This Sauvignon comes from a vineyard located just 200 metres from the sea on the cliffs. I pick up the saltbush character again and, on the nose, it has plenty of herbal methoxypyrazene notes.  The palate is fruitier with good intensity and vibrancy to its passionfruit.  Very well done.  The saltbush to the finish is a firm stamp of this wine’s terroir.

I first tasted this wine in 2013 and, thanks to the estate’s trademark racy acidity, it’s developing very nicely. Around a third of the blend (Chardonnay only) was barrel fermented (French oak, none new).  It shows attractive white peach and citrus fruit; sweet hints of vanilla oak and honey hints are well balanced by a salty piquancy and animated, mineral acidity.

This is the Chardonnay which blew me away, one of my October Wines of the Month.  Like Bruemmer’s garden it has classical lines – a fabulously taut frame of acidity in the case of the wine (rose beds in the garden) which, together with its classy, subtly smoky oak, brings terrific structure, precision and finesse. And it boasts tropical hints – palm trees in the garden, juicy rock melon and zesty lime in the wine.  A salty minerality speaks of the vineyard’s location a stone’s throw from the sea.  All in all a very exciting Chardonnay which will be stocked by Lisbon’s Estado d’Alma.  13% 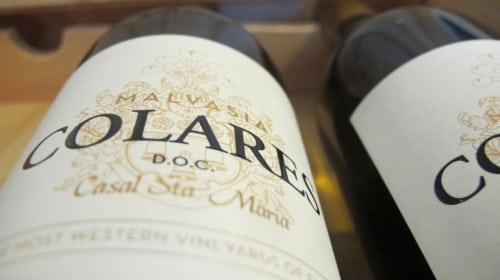 Just 1200 bottles of this barrel fermented wine were produced.  It spent a year in barrel and a year in bottle prior to its release.  I also tasted this wine in 2013 and it has put on a bit of weight/gained in mouthfeel since then.  A complex nose and palate reveals oilskin/wet wool, grapefruit, orange blossom and peel and acacia honey which (honey) builds in a long, quite savoury, nutty, dry finish with very  persistent acidity. Very good; a modern style of Colares.

Just 1200 bottles of this fruitier, more citric vintage were produced.  Youthfully crisp, mineral, serrated acidity animates the palate which has traces of incipient nuttiness. Very good, though needs time to settle down a bit.

For winemaker Jorge Rosa Santos, the estate’s reds are challenging because of their high acidity and relatively light style which, he says, is unusual in Portugal.  He’s most definitely right when he says that the reds seem “more to face the characters of the earth – the ground of Sintra hill – while the whites talk about the sea.”  I pick up intriguingly ethereal pine needle and mushroom notes as well as violets in this delicious red.  In the mouth (medium bodied), it’s quite smoky, spicy too with fruitcake and sweet plum balanced by hints of cheroot, black tea, dark chocolate and those earthier pine needle and mushroom notes.   Refined tannins and fresh acidity make for a persistent, rolling finish.  Very good.

For Rosa Santos, Pinot Noir is “a kind of Ramsico but polite.” He elaborates Ramsico has wild tannins, while Pinot Noir is more feminine.”  I loved the nose – all sweet cassis and mushroom, though its charry oak is overdone (Rosa Santos reassures me that the following vintage has less time in barrel and more used oak) and the palate is tight and a bit unforgiving.   We taste a bottle opened the previous day and the fruit is more evident but, like the first, the tannins are a little drying on the finish. With more vine age (this comes from six year old vines), I reckon the estate could make good Pinot. I was really fascinated by this wine because it has essentially the same base material as the 2006 Ramsico from Adega Colares which I’d tasted earlier in the day.  It had very high volatile acidity which Rosa Santos overcame by blending in 15% of another vintage.  So it’s much fruitier than the Adega’s 2006 with a nice concentration of sour maraschino cherries and vivid pomegranate fruit threaded with mineral, slightly smoky, clove tannins. Casal Santa Maria’s 800 bottles were aged at Casal Santa Maria for the last one and a half years and it was fined and filtered prior to bottling.  Very good.