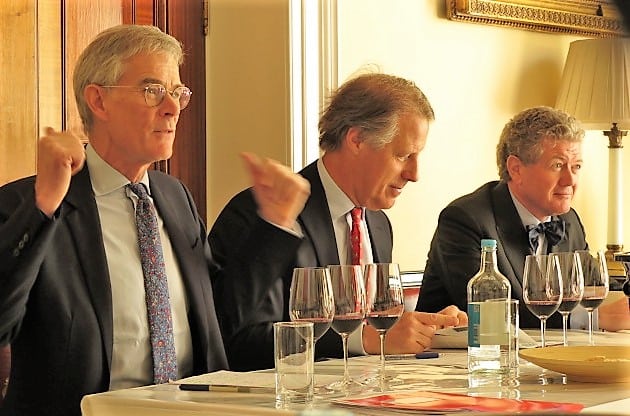 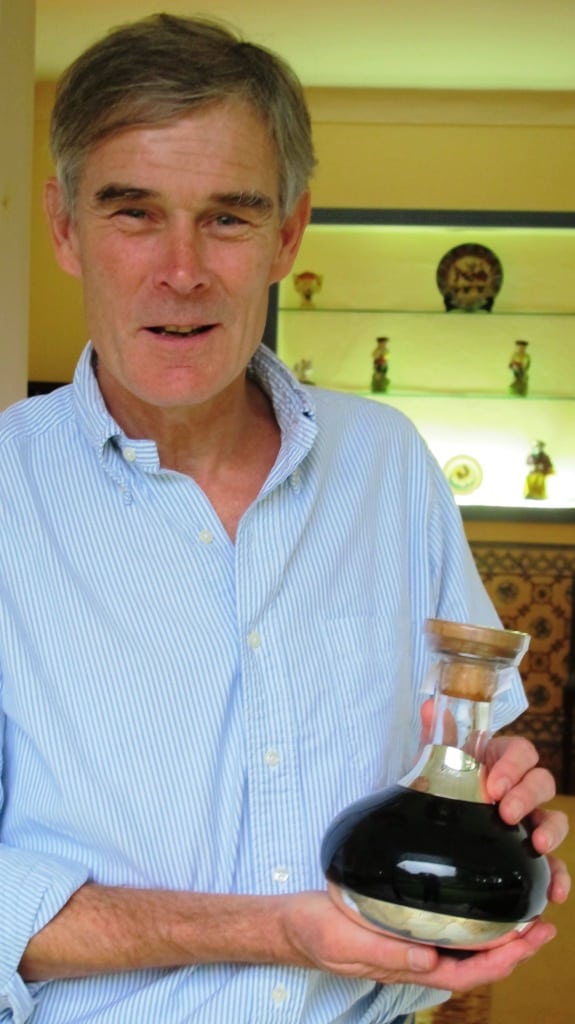 Paul Symington – sharing a glass of Ne Oublie in 2014

As I write this, I feel a little bereft.  After 40 years in the family business, Paul Symington retires from the position of Chair and joint Managing Director of Symington Family Estates at the end of this year.  His incisive harvest reports and insightful commentary set the gold standard for brand communication in Portugal.  And, in this Douro/Portugal passionista’s case,  ‘brand’ extends beyond the purview of Symington Family Estates portfolio, encompassing wider concerns, such as environmental and economic sustainability.

Understandably, he has won the ear of the media for his detailed but always relevant commentary and swift response to queries.  In fact, I don’t always post his vintage report because it is so widely re-published here in the UK, even by the most fiercely independent of critics.

Meantime, I raise a glass to Paul in thanks to the insights and tasting opportunities you have afforded me over my relatively short time immersed in Portuguese wine.  And going forward, here is a toast to more Portuguese producers rising to Symington’s gold standard in brand communication.

We assumed that we would revert to a normal year after the driest ever growing-season in 2017, but we were wrong, and the long drought continued through to March 2018. The Douro had endured 20 consecutive months with well below average rainfall.

The nearly two-year ‘seca’ ended abruptly with heavy rains in March, April and May

Our pleading to the weather gods was clearly overdone as the nearly two-year ‘seca’ ended abruptly with heavy rains in March, April and May. These fantastically wet months delivered more than double the normal rainfall and culminated in a major storm on the evening of Monday 28th May. In the Pinhão area, 90mm of rain fell in less than 2 hours, with some localised but devastating hail. No soil can absorb this quantity of water, especially our steep hillside vineyards, and erosion caused severe damage. Incredibly, olive trees were scarred by the stones hurled against them by the gushing water as it headed downhill to the river. This major gale was heart-breaking, and the wise old Douro caseiros (vineyard foremen) shook their heads in despair. 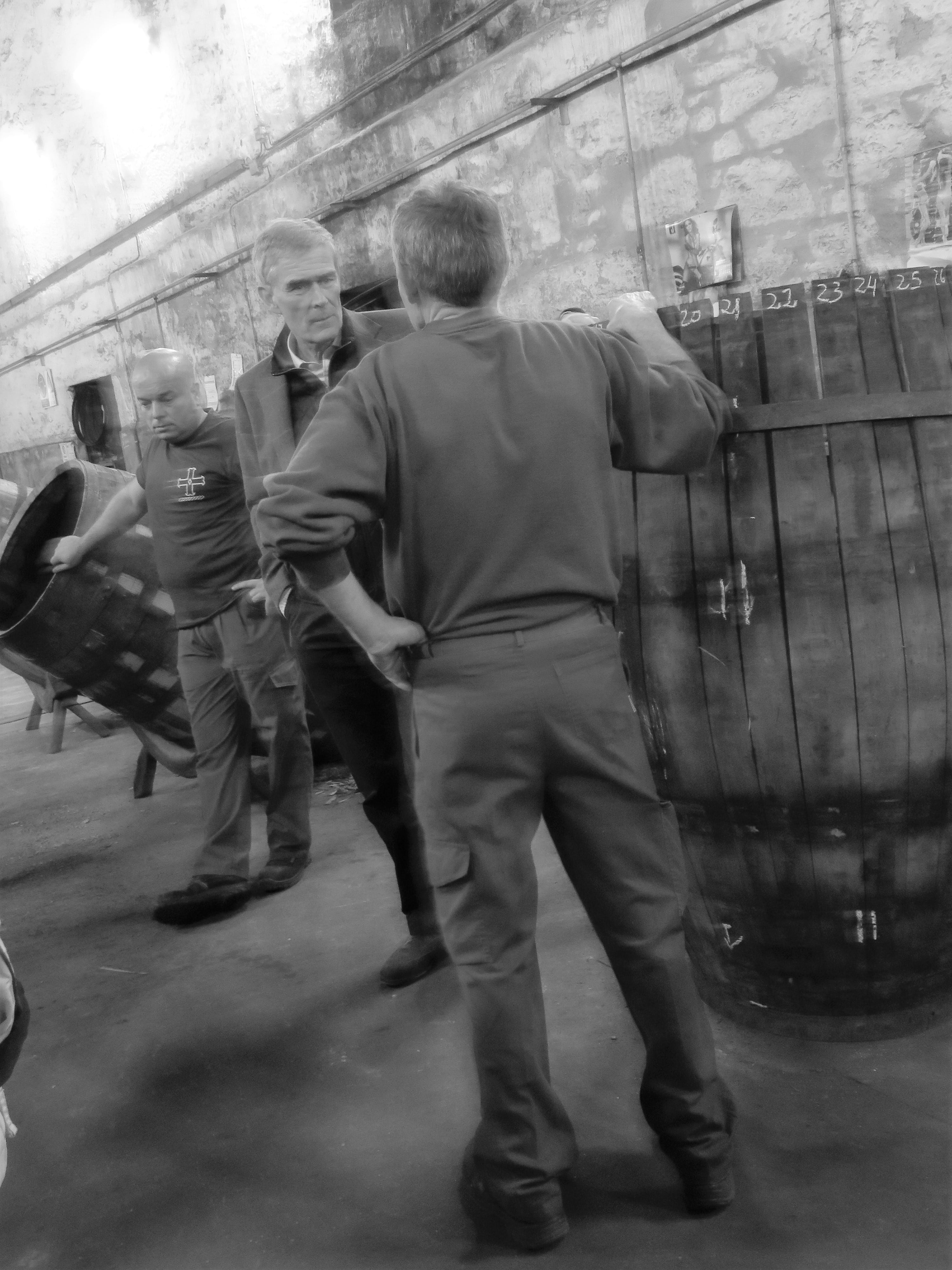 Heavy spring rain is always a challenge as we go through the delicate bud break and later flowering, and inevitably this watery spring resulted in substantial losses. Vineyard work was intense and costly this year and farmers who were a few hours late in their treatments lost their entire crop. It is impossible to ignore the fact that 16,890 farmers in the Douro have less than 2 hectares of vines each and yet they represent 23% of the region’s vineyards. Most of these small holdings are notoriously underequipped and their future is increasingly doubtful as their children flock to the cities to find easier work.

Bud break was three weeks behind normal because of the wet and cool spring and the pintor (the painter) arrived two weeks later than average. Finally, a more normal weather pattern emerged in July with average temperatures and no relevant rainfall. The vineyards that survived the strange and challenging lead-in to the final furlong were looking magnificent through a hot August, clearly benefiting from good moisture in the soil.

September was rather hotter than we would have liked

The indispensable long-term weather forecast (unavailable to our ancestors) predicted fine weather through to October, and this proved entirely accurate, giving adequate time to allow the grapes to reach full maturity. We felt by now that we had truly earned a calm and pleasant harvest; September was rather hotter than we would have liked, with the monthly average 3.4˚C higher than normal, but lovely blue skies persisted throughout. The warm days advanced grape maturation faster than expected and cooling the musts in the lagares was almost always necessary for each ferment.

Yields were absurdly low in 2018, with many of our vineyards producing 40% less than average. There are few that are less than 25% down on the norm. This was the second year in a row with dramatically low production and there was a desperate scramble for grapes, particularly from those with few vineyards. Prices for Douro wine grapes rocketed upwards, which is probably a very good thing, certainly for the farmers who have had a torrid few years. Hopefully the higher cost of grapes will correct the ridiculously cheap retail prices of some Douro wines that are seriously damaging the future of our region, putting us on a par with the world’s low-cost and high-yielding flat vineyards.

Despite (and in part because of) the incredibly low yields we have made some excellent Ports and Douro wines in 2018. The Touriga Franca has been particularly good, having clearly enjoyed the hot final ripening period, and has delivered wonderful colour and particularly lifted aromas. The latter is not a normal characteristic of Franca but it will be very noticeable in our wines this year.

Paul Symington gives a double thumbs up for Vintage Port 2016

It is somewhat ironic that the many tens of thousands of tourists who have now discovered the unique charm of Porto as well as the extraordinary beauty of the Douro, are fast drawing people into the hospitality industry, thereby creating a severe labour shortage in the very same vineyards that they so admire. The Douro, the world’s most challenging mountain vineyard, is the last major wine region that is entirely picked by hand due to the incredibly steep vineyards. This is clearly not sustainable, and grapes will remain on the vines unless an alternative is found.

For too long, too many people have viewed the Douro as a mysterious, remote but beautiful time warp where Port and Douro wines can be made cheaply, dependent on a distorted regulatory system, low-wages and plentiful labour. The last two harvests have shown that change is imperative if the unique Port and Douro wines from our low-yielding indigenous vines and our extraordinary schist soils, can continue to be made.