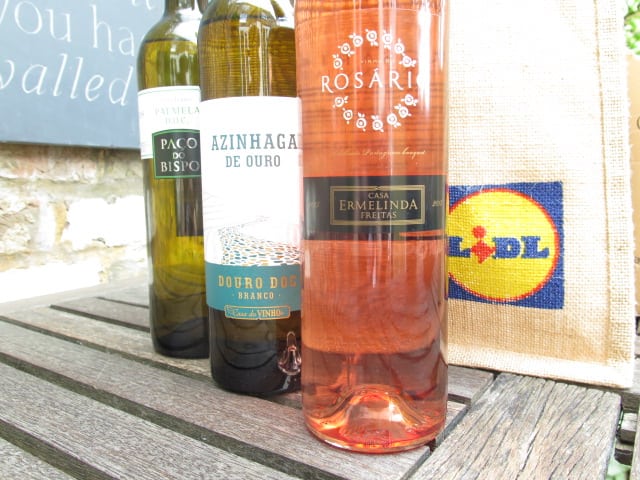 How very nice to receive a targeted press release from a supermarket focused on matters Iberian.  Specifically, Lidl’s newest Wine Cellar Promotion.  The collection of 40 wines –  23 are from Spain and Portugal – is due to arrive in-store tomorrow, 4th August.  With five Portuguese wines, Spain has the lion’s share – no change there. But it’s good to hear that Portuguese sales are on the up.

According to the press release, recent Kantar data reveals that Lidl’s sales of Spanish wines have increased 49.22% year on year, and those of Portuguese wines 57.67%, hence the Iberian focus for this collection.

That’s quite a leap.  Wanting to put this growth in context, I asked if these statistics reflected Lidl’s UK or global sales and what percentage of Lidl’s UK wine sales are represented by Portuguese wines.  However, the team at Lidl were unable to offer a response, so I am none the wiser.

However, I can tell you that Casa Ermelinda Freitas Rosário 2015 – a rosé – punches well above its weight at £4.99.  It was far superior to the like priced Portuguese white wines which accompanied it – the rather short Adega Cooperativa de Palmela Paço do Bispo Vinho Branco, Palmela 2015 and Caves do Monte Azinhaga d’Ouro Douro Branco 2015.

With some 440 hectares of vineyard, Casa Ermelinda Freitas is a sizeable family-owned producer.  But in my experience (the portfolio is huge), the wines are very well made and offer great bang for buck.  Jaime Quendera oversees winemaking here (and at the excellent neighbouring cooperative, Adega de Pegões).

Quendera memorably once told me that he gets most satisfaction from making entry level wines, because he is keen to ween folk off beer in favour of wine.  It shows.  Plus this wine mostly comprises Castelão.  It is Península de Setúbal’s traditional grape and, well adapted to the region’s maritime climate and ancient sandy soils.  No less than 60% of Casa Ermelinda Freitas’ vineyards are planted to it.  I expect some of these vines date back to the estate’s foundation in 1920.

Although Casa Ermelinda Freitas Rosário is a big volume production wine, Lidl describes it as a “limited edition” because all wines in the Wine Cellar Promotion are only on shelves until stocks last.  As they say, when it’s gone it’s gone.

Castelão often reminds me of Grenache and, if you like Grenache rosés, this will strike a chord with its red cherry boiled sweet and creamier strawberry notes.  But what really distinguishes the variety (here blended with 30% Aragonês) is this wine’s freshness –  a product of the region being bang slap next door to the Atlantic (the vineyards are in Fernando Pó, Palmela).  It balances this rosé’s residual sugar rather well, making it super-drinkable.  And with such low alcohol, why not.  Incidentally, despite this low alcohol, Rosário has enough intensity of flavour and acid structure to show well on day two.  Not that it is likely to last!  Perfect summer quaffing.  10.5% £4.99 at Lidl from 4 August.