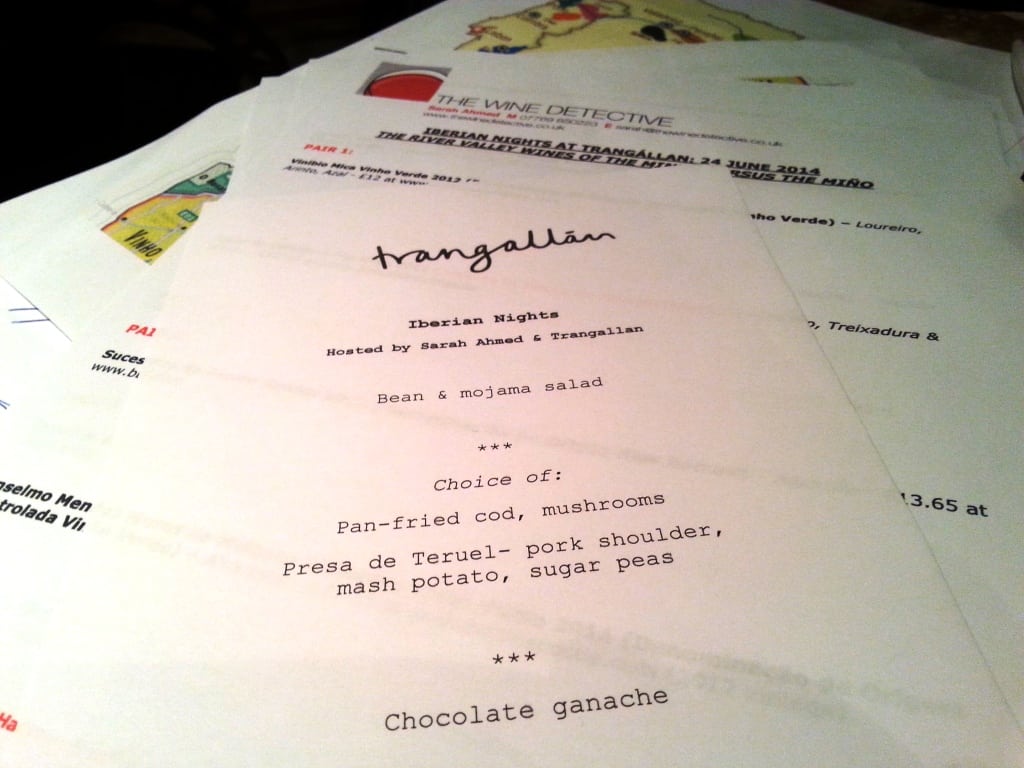 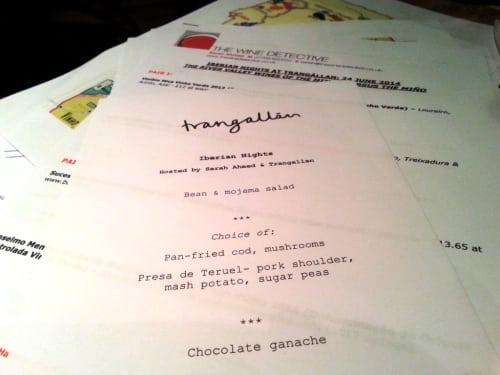 I have really enjoyed co-hosting Iberian Nights at Trangallan.  And not just because Portugal won four of our five Spain -v- Portugal head-to-heads, including our fortified finale (the narrowest of victories, I might add).

In fact the fortified finale summed up what’s been great about it.  I loved finding out more about Sherry from my co-host Xabi and it’s been stimulating to look at Spanish wines alongside Portuguese wines and tease out some differences.

For last Tuesday’s tasting, the obvious contrast was sweetness.  All the sherries were bone dry which meant we showed all the Sherries first then moved over the border(s), next tasting the Madeiras, then the Ports.  And boy, with its 55g/l of residual sugar, Madeira’s famously dry Sercial almost looked generous!  One certainly felt the palate weight though, of course, high acidity (double that of the Sherries) made for the grape’s exhilaratingly fresh finish.

And sticking with the topic of sugar, the relative versatility of the Sherries – from aperitif, right through dinner to cheese, is certainly a bonus where Portuguese fortifieds very often end up in the after dinner slot.  Not so very fashionable these days….

As Xabi put it, the process of making Sherry liberates so many flavour and aroma compounds that Sherry easily finds synergies with food.  I urge you to head over to Trangallan and put his theory to the test (and because the food is fantastic – another highlight of the tastings).  The Palo Cortado  worked brilliantly with scallop tartare and pickled chilli gazpacho (delicious) – it was the pickled chilli what did it!

Just a thought.  Niepoort make an unfortified Fino-alike with Sherry producer Equipo Navazos.  Why not make a truly bone dry White Port which offered this versatility?  I shall put it to Dirk!

Looking back over the series, here are my favourite wines: I have to admit that, though Portugal won this round, Spain’s more varied southern terrain and old vines won me over.

Jimenez-Landi Bajondillo 2012 (Denominación de Origen Méntrida) – this foot-stomped Garnacha (Grenache)/Syrah blend from elevated vineyards (550-800m) ran counter to all expectations showing not a jot of the confection or high alcohol – tight and fresh, almost to the point of austerity! £11.00 at Highbury Vintners 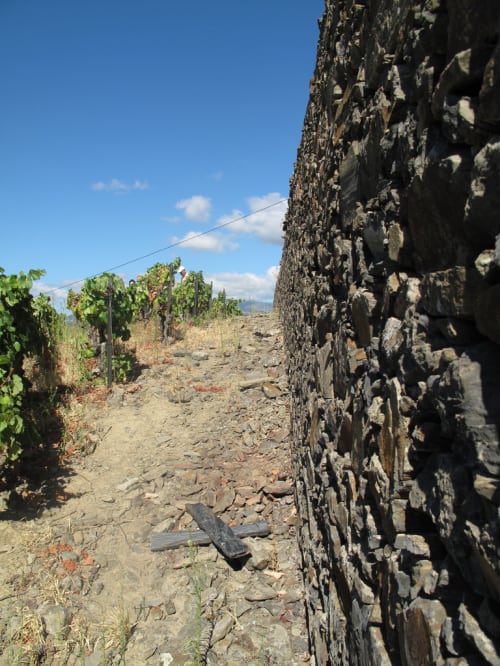 Conversely, though Spain won this round, the Douro remained my firm favourite

More compelling reds won me over to Spain in this head-to-head which Portugal won by a whisker. 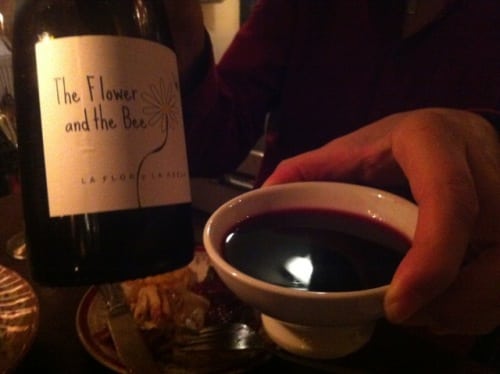 Coto de Gomariz The Flower And The Bee 2012 (Denominación de Origen Ribeiro) – though Anselmo Mendes’ smoother Pardusco won this round I have to admit this bright, sparky Sousón got my vote.

Dominio do Bibei Lalama 2010 (Denominación de Origen Ribeira Sacra) – I’m a big fan of Mencia, aka Portugal’s Jaen – wish it could reach the ethereal heights of Spanish wines like this blend of 90% Mencía, 10% Brancellao, Mouratón, Souson and Garnacha. 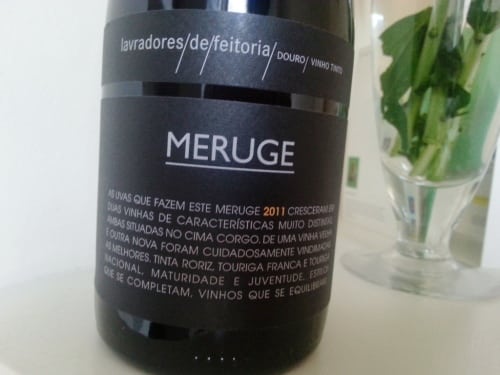 As I subsequently dubbed this tasting – a head-to-head of Spain’s Tempranillo/Tinta Pais with Portgal’s Tinta Roriz and Aragones.  Why?  Click here for the low down on what makes this grape tricksy.  Blends definitely fared best.

Valle Pradinhos Porta Velha 2011 (DO Trás-os-Montes) – fresh, fruity but focused and mineral, this Tinta Roriz with a dash of Touriga Nacional got a rave reception  £7.95 at The Wine Society

Carmelo Rodero Cza 2010 (DO Ribera del Duero) – a dash of Cabernet Sauvignon played a winning role for me in this blend – polish, line and length.  A long and involving wine with lovely savoury acidity. £17.99 at de Vinos

Urbina Gran Reserva 1994 (DO Rioja) – a classic Rioja blend of 90% Tempranillo, 5% Graciano and 5% Mazuelo and, with 20 years under its belt very pale and interesting with delicate and ethereal dried spice, oyster shell/iodine. 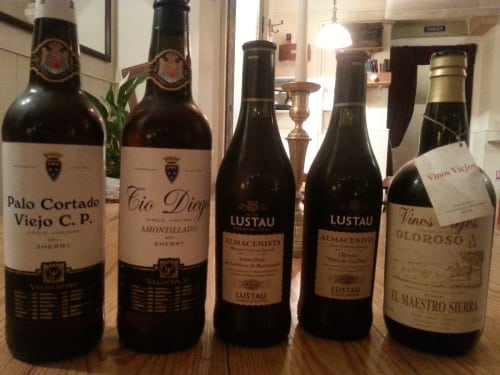 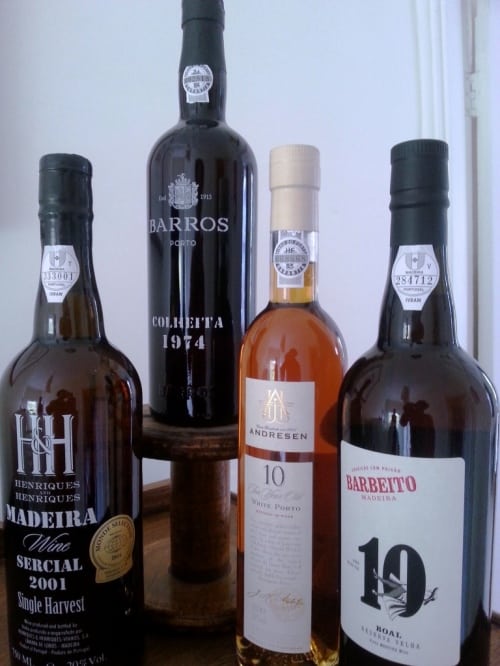 Henriques & Henriques Single Harvest Sercial 2001 Madeira – this super dry, super kelpy Sercial was one of my picks of the Annual Madeira Tasting in London this year and last.  Still takes my breath away.

Barros 1974 Colheita Port – a silkily smooth 40 year old single vintage Tawny Port which produced many a sigh of satisfaction.  Beautifully balanced with seamless yet complex layers and a long lingering finish.  Puts the double l into mellifluous!  £125 at www.vintagewineandport.co.uk