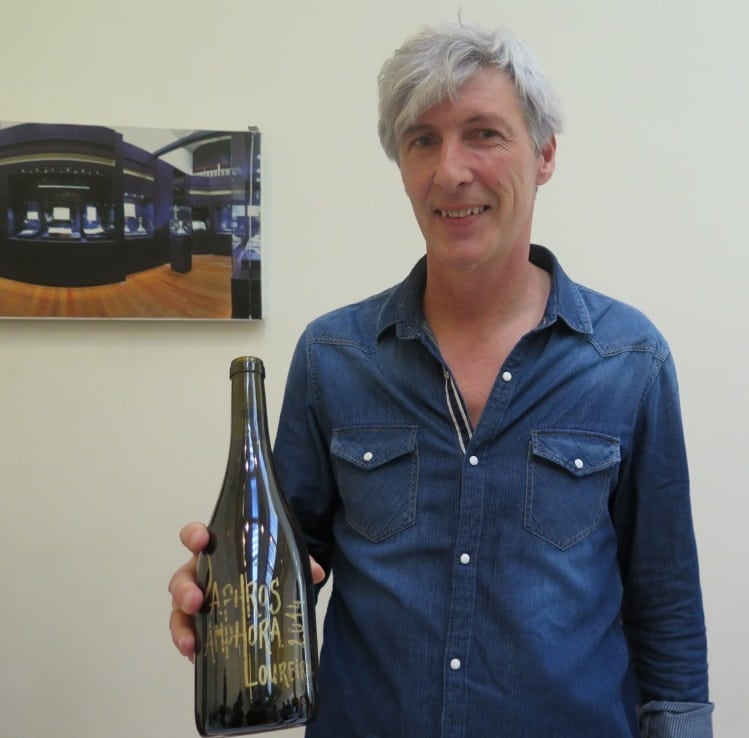 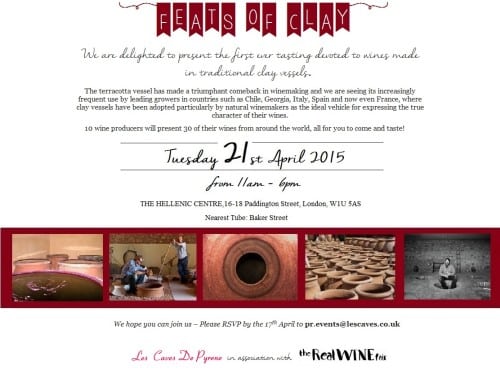 Last week leading natural wine specialist Les Caves de Pyrene presented their first “Feats of Clay” tasting dedicated to wines aged in clay vessels (talha, amphora, tinajas, qvevri, giare), sometime underground.  Though it’s a minority sport, over 50 wines were shown and from further afield than you might think – Georgia, of course, where it all started, but also France, Italy, Spain, New Zealand, Australia, Chile and Portugal.   Surprisingly, not Greece though we were in The Hellenic Centre!

Like biodynamist Aphros’ Vasco Croft, the only Portuguese producer attending, I came to learn about this old new genre.  Croft recently built a new cellar (first harvest 2015) but plans to continue using his family’s tiny traditional Vinho Verde cellar for wines made without technology or electricity.  So clay ( as opposed to temperature controlled stainless steel vats) is the way to go.  He obtained his beeswax and laurel resin-lined 300 litre amphorae (known as talha in Portugal) from one of the two craftsmen still plying the trade in Southern Portugal, Alentejo.

Although Alentejo has a tradition of ageing wines in talha since Roman times, the (small) size of  Croft’s amphorae tells a story. With the notable exception of José de Sousa (about whom my Blend colleague João Pedro de Carvalho recently wrote here), most people using them are hobbyists making wine for home consumption. There does, however, seem to be a revival of interest among Portugal’s most progressive producers – Croft, Filipa Pato, António Maçanita, António Marques da Cruz and, I understand, Susana Esteban. 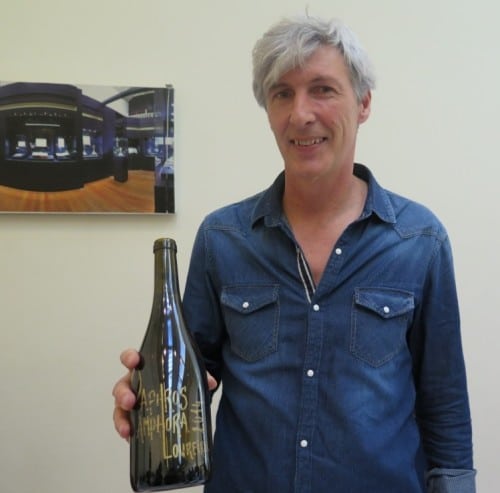 For a first effort, I reckon Croft (and winemaker Rui Cunha) deserve a hearty pat on the back.  You’ll find my notes on Croft’s two wines together with other highlights below.  Just to flag that I focused on white wines, so only tasted a handful of reds.  As I have previously found with natural wines, I tend to prefer (and find better balanced) those which still retain vestiges of fruit, both in terms of fruitiness of flavour and fleshiness of body.

Croft has (in my opinion) very successfully worked with Louriero and skin contact before.  I loved the stony, pebble-sucking minerality of Aphros Daphne 2011 and I found it once again in this wine. While Daphne was part fermented and aged in (used) oak and chestnut barriques after around 12 hours skin contact, this wine was aged in amphora after two months on skins.  No sulphur has been added which, no doubt, explains why this wine lacks varietal character (though its levity and freshness speaks of Vinho Verde and a particularly fresh vintage).  Croft and I agreed it has a presence in the mouth which is hard to explain.  It’s not so much about the weight of the wine – as I said, it has a levity.  It’s more about a stony, mineral resonance which makes a cave of your skull – a pebble in a pond ripple effect if you prefer.  This is a dry, fresh, mineral white with a gentle lift of spice to its tail and a slow burn intensity of impression.  Though I preferred it when I tasted a couple of months ago at Simplesmente Vinho (when it retained hints of honeyed pear  and quince) I still liked it.  Croft reckons it’s about 11.5% abv. 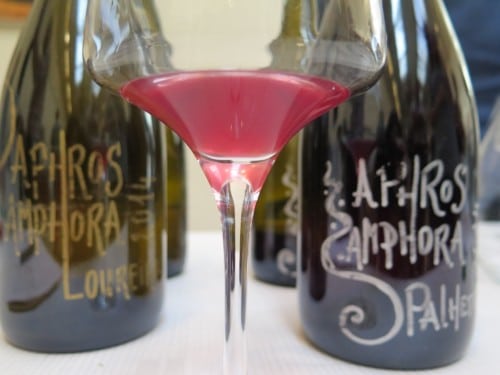 Palhete refers to the tradition of producing pale reds which we would now describe as rosés from a blend of white and red grapes, the latter vinified like white grapes (i.e. only the juice, not the juice and skins is fermented). According to Croft, all red wines used to be made this way (originally for communion wine), which is why the Portuguese word for red wine is Tinto (meaning tinted) and not Vermelho (which means red).  It was interesting to taste a white wine made with skin contact and then a pale red/rosé with none (other than during pressing)!  It’s a blend of 80% Loureiro and 20% Vinhão and, let me say, the Vinhão most certainly asserts its varietal character despite being very much the junior partner and despite the oxidative impact of ageing in talha.  It lends a distinctive wild, iodine/gamy/earthy note and very gentle rub of tannin to this otherwise quite delicate, fresh rosé.  I liked its softness in the mouth – a sense of orange/orange peel/orange oil expansiveness – perhaps the Loureiro’s foil to the more strident Vinhão?  Again, around 11.5% abv

Loxarel is another biodynamic producer working with amphora.  Both wines I tasted are made from the Xarel.lo which spent about fives days on skins.  This first wine had a little sulphur on bottling and I preferred its fresher, more primary profile.  It reveals, steely white pepper flecked breakfast grapefruit and hints of sweeter, juicier pink grapefruit.  Nice focus, freshness and persistence.  13%

A Pèl means without protection.  This sulphur-free Xarel.lo is, understandably a deeper gold-tinted hue,  with a honeyed, very spicy (pungent fenugreek rather than delicate white pepper) palate with a gently nutty finish; good acidity keeps it focused despite the oxidative profile.  It’s really interesting to taste the difference a dash of sulphur makes; you’ll have guessed from my earlier comments that I preferred the first wine.  It’s fair to say, much preferred it.  Amiable winemaker Josep Mitjans told me that A Pèl tastes fantastic with sushi – next time!

I came across Rafael Bernabe’s Bodegas Bernabe wines for the first time last year during my Spain v Portugal head-to-heads at Trangallan.  Loved their super mineral El Carro dry Moscatel from aged bush vines planted in dunes next to the sea.  This Moscatel with bubbles comes from the self same plot.  The base wine underwent 15 days skin contact and was fermented in a 450l tinaja then aged in bottle one the lees for 6 months.  It bottled (and made) without sulphur addition, fining or filtration and has a lovely immediacy – very grapey, spicy and floral on the nose, with hints – a youthful gleam –  of pink grapefruit.  It shares the saline, mineral profile of El Carro, its dryness and length too.  Very good. 12.5%

Having just presented an Australian Grenache tasting and being a fan of Mencia a.k.a. Portugal’s Jaen I made a bee-line for La Perdida’s reds. Wow.  Are they intense.  Which is interesting because, apparently, this wine was something of an accident – a response to poor flowering aged for two months in amphora which had been abandoned in the cellar.  It’s a creamy deep sappily black-fruited wine with terrific spice resonance and violet lift.  The tannins are firm and powdery – big particle/very present.

A bit reduced on the nose but expressive of hue and on the palate.  It’s a deep, deep colour and more concentrated (than the 2013) on the palate with very deep-seated spices and violet perfume.  A finely drawn palate has great freshness and persistence of black fruits. The tannins are dry, firm and resolutely anchoring of the flavour.  Long, very good.

It’s been a long time since I tasted Foradori wines – almost 10 years.  I didn’t know the whites, but I had a big soft spot for the Teroldego, especially the basic wine which I recall ordering to accompany a tuna carpaccio marinated in soy at Cavour 313, in Rome.  Shame I didn’t have time to look afresh at the reds now this estate has gone biodynamic and is producing amphora-aged Teroldego.  Elisabetta Foradori showed three vintages of her white (2009, 2010 & 2012).  I enjoyed the animation and flesh of this, the latest release.  It’s a very delicious, textured wine with dried camomile, quince, bright, sappier star fruit and firm acidity.

My first taste of Vodopivec’s wines and my first taste of the Vitoska grape variety in which the winery exclusively specialises.  I liked it.  I wondered if there was some residual sugar in this wine, but apparently it’s the grape’s natural sweetness.  Here honeyed, which balances very deftly the spiciness which results from ageing for six and a half months in amphora.  I liked the way it grew in the mouth – great palate presence.  The long finish shows hints of wild honey, white chocolate and nuts.  Powerful, with great structure.  Although similarly spicy and honeyed, the 2011 seems more floral, with intriguing lavender and angelica notes.

This pale red is made by Vino di Anna, which was established by Les Caves’ founder, Eric Narioo, and his partner Anna Martens in 2010. It’s made from organically farmed old vine Nerello Mascalese from terraced vineyards at 600-1200 metres on Mount Etna which was fermented and aged in a 2,000 litre Georgian Qvevri.  It has a gentle arc of sweet, slippery, slightly jammy red cherry and plum fruit with a nutty edge on the finish.   The tannins are smooth – part of its slipperiness and simplicity – a fluidity.  Very biddable, charming.

I liked this Georgian producer’s wines very much; a bonus is that they were among the less expensive wines on tasting.  This wine underwent three months skin contact.  It has a sweet, honeyed round nose and palate with just bitter apple core and grapefruit hints and smoky, spicy layers.

This wine underwent just one month skin contact.  It has a juicy core of sweet pear fruit and a lingering, honeyed finish with a touch of smokiness.  Lots of charm.

Although the fruit is on the backfoot, not exactly overt, Tsolikauri is relatively rich and round with and almost creamy fruit salad quality and hints of exotic, sweet, perfumed mandarin.  Mineral acidity teases out a lingering finish.  Lovely.