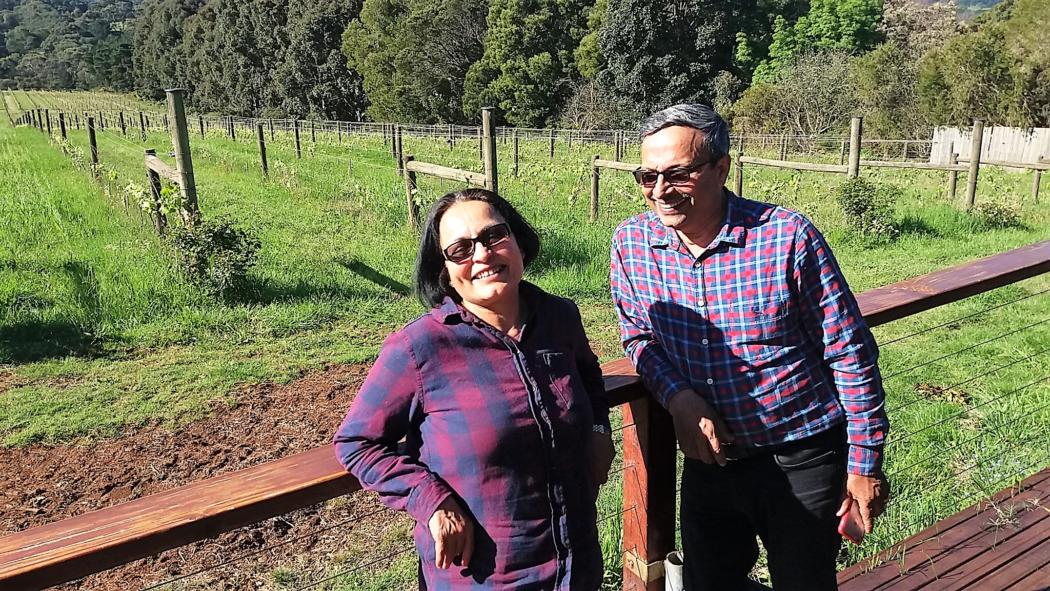 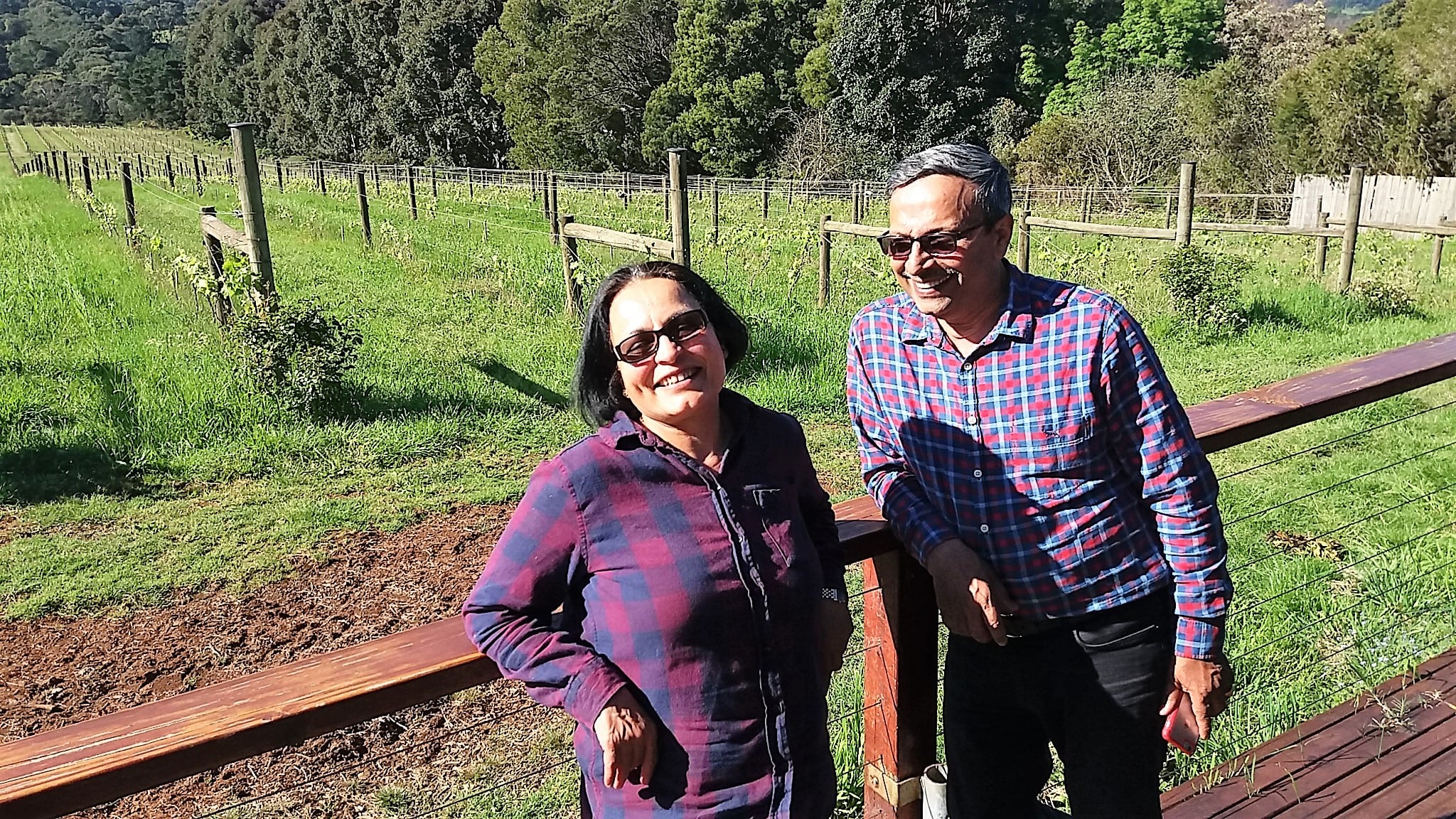 I first came across Avani last September, when owner/winemaker Shashi Singh – a chemist by training – attended Wine Australia’s Women in Wine Tasting.  Blown away by the 2015 vintage, I wrote up Avani Syrah in my October Wines of the Month post.   The following month I headed down under to judge at the Limestone Coast Show and spent a few days in Mornington Peninsula doing groundwork for this November’s Arblaster & Clarke wine tour.  It was the perfect excuse to visit Avani in Red Hill South.

Singh and her husband Devendra, a restaurateur, received me at their small winery.  A vertical of Avani Syrah reinforced my initial impressions – it’s a lovely cool climate example of Australia’s emblematic grape.  Moreover, whilst the 2012 and 2015 vintages were my picks of the bunch, the wines very consistently expressed their place of origin, with a spiciness and slightly earthy, granitic minerality which I much enjoyed.  Fitting then that Avani is an ancient Sanskrit word that means ‘the earth’. 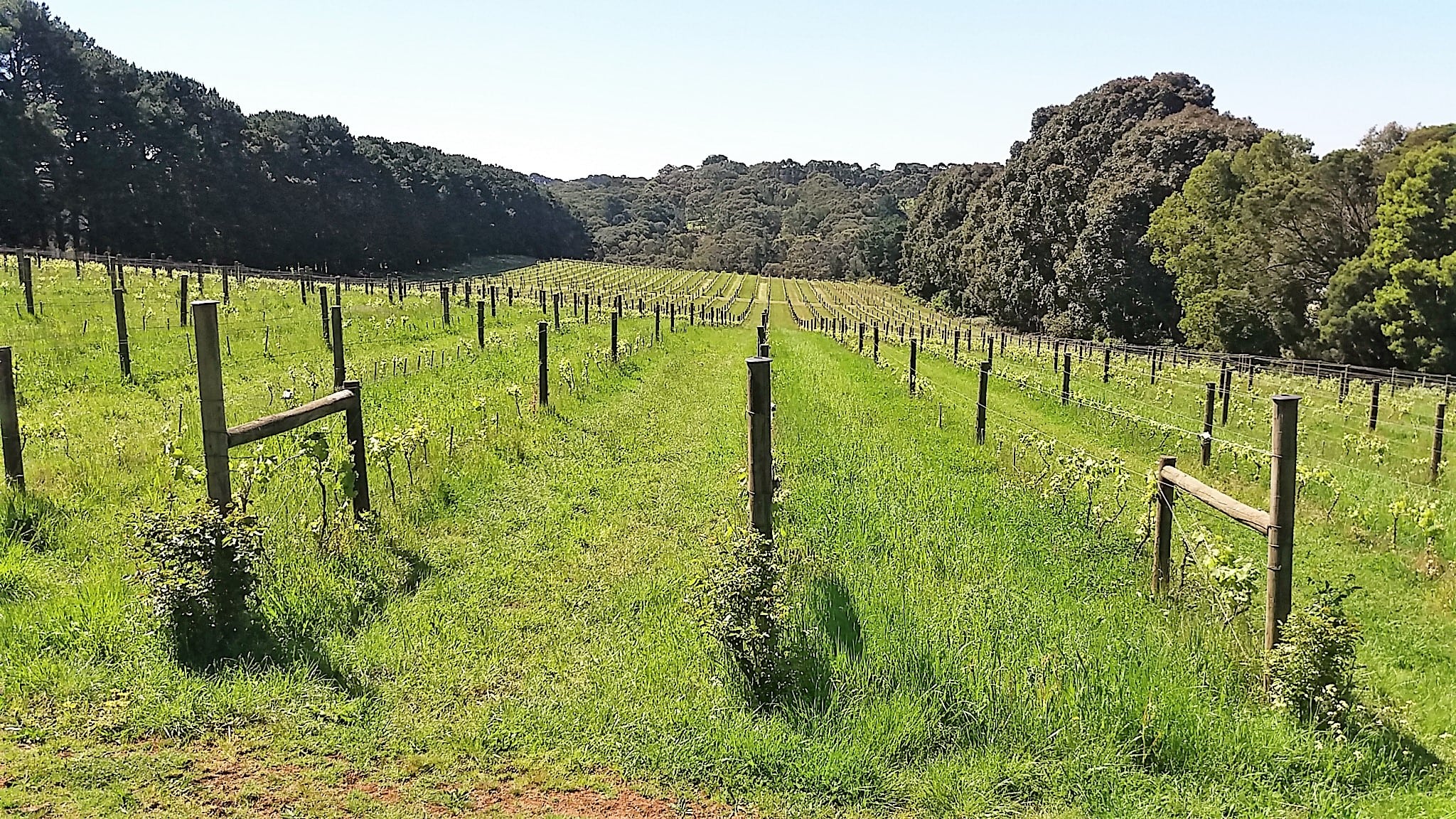 Before the tasting, we took a stroll around the vineyard, which the couple acquired in 1998.  The four acre dry grown vineyard, once an apple orchard, was planted in 1987.  Rising to 204m, the long, thin, north facing site slopes down from the winery and is surrounded by trees to three sides. Very discrete, though Singh observed that the steep top part of the vineyard has leaner, greyer soils which ripen grapes a week earlier.

Having cultivated it biodynamically since 2005, Singh has noticed that the soil (clay loam and tertiary basalt) has gone browner and has more worms. Oats, peas and mustard sown in alternate rows help improve soil fertility and, she added, “we have no problems with nitrogen deficiency during ferment.”  She also uses seaweed sprays and biodynamic preparation 500 to that end, while quartz-based 501 is handy to assist leaf growth.  Innovatively, her distinctly Indian accented garlic and chilli sprays ward of the wallabies!

Other major benefits which Singh attributes to farming biodynamically include phenolic (tannin) ripeness being attained some two and a half weeks ahead of sugar ripeness and acids holding for longer.  Whereas, she observes, “early vintages like the 2007 (13.6% abv) had overt fruit and the other elements were not in balance, now all the flavours are integrated and balanced irrespective of season.” Smiling contentedly, she observes, “it makes for elegance and purity…Avani Syrah is never more than 13%.” And in 2011 when, she says, most Mornington Peninsula vineyards suffered from botrytis, Avani had none.  “It  cemented my belief in biodynamic viticulture,” she said. 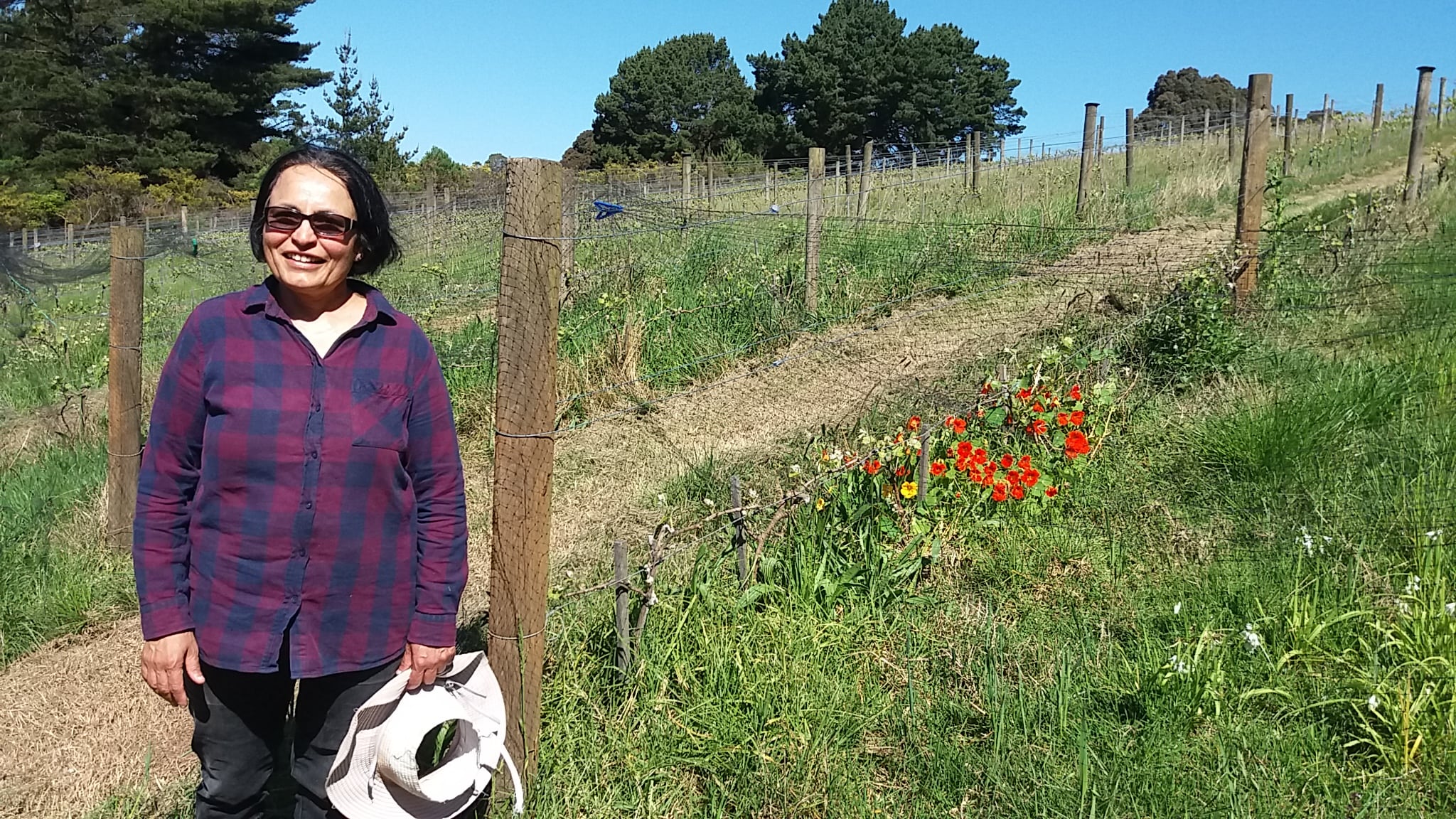 Converting to biodynamic cultivation is not the only change under Singh’s ownership.  Originally, the vineyard was dominated by Pinot Noir and Chardonnay, with just a small planting of Shiraz, Cabernet Sauvignon and Merlot.  Pinot Noir would have been the lure for Singh, who completed an eight year apprenticeship with Pinot Noir luminary Phillip Jones of Bass Phillip following her oenology degree.  Ironically, (and, the Pinot lover confessed, somewhat to her initial disappointment), the site was simply not destined to make great Pinot Noir (it was a bit too warm, she said).  “I tried everything I could to make a great Pinot Noir, but it just wasn’t as interesting as the Syrah.”

“I tried everything I could to make a great Pinot Noir, but it just wasn’t as interesting as the Syrah.”

So in 2006, Singh grafted over the other varieties to Syrah, with cuttings from the vineyard.  To further enhance the intensity of flavour in the wines, the planting density was also increased from 1,400 vines per hectare to 4,000 vines per hectare, reducing cropping levels to a measly 17hl/ha.

The 2009 vintage was the first vintage Singh completed by herself at the Leongatha winery, under Jones’ watchful eye. She credits Jones with giving her the confidence to let the vineyard express itself and not to get side-tracked – “if you get the viticulture right, you get the flavours.” 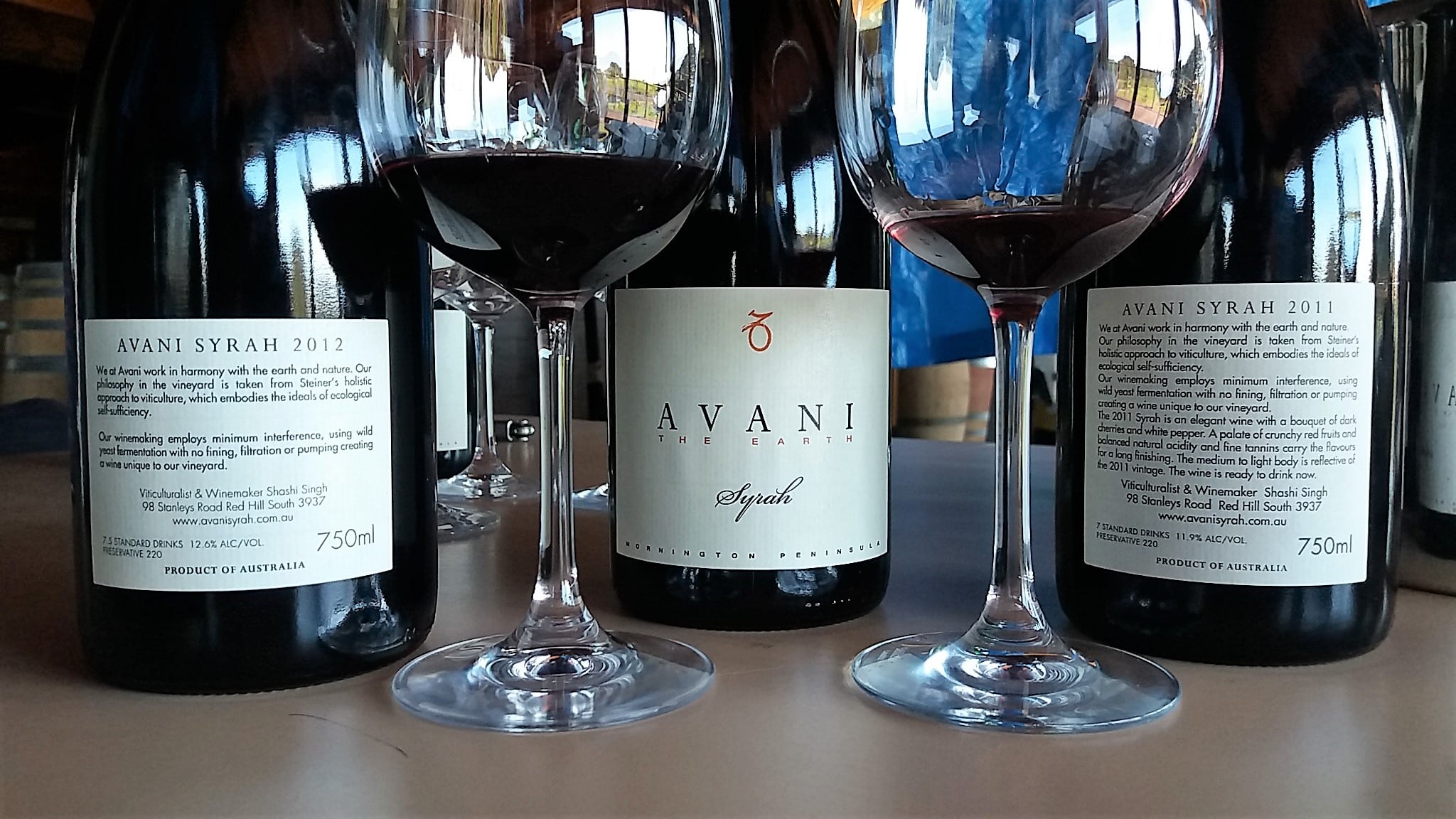 Since 2012, the wines have been made on site at Singh’s own winery.  Describing her winemaking approach as one of minimal interference, Avani Syrah is wild fermented and neither fined nor filtered.  No pumping is used.  De-stemmed, crushed grapes are cold soaked for 7-8 days, fermented for 7-10 days, then undergo post-fermentation maceration for between 7-28 days, depending on the vintage. The wine is matured in 2-3 year old French oak barrels for a period of 18 months. Since 2012, the wine has been gravity-fed and hand-bottled on the premises.  Based on current yields, production is between 150 – 200 cases of wine per annum.

In this difficult, cool, wet year the grapes were harvested late – in the first week of May.  Though healthy, ideally they would have attained greater maturity but, said Singh, “the weather had changed to winter and nothing happened, so we had to pick and the wine was fermented at 20 degrees.” Concerned about not getting enough extraction, Avani Syrah 2011 was left on skins for a month.  As befits the vintage, it is paler than the other wines in the line up, with a touch of brown to the rim.  However, in the mouth it shows lovely depth of peppercorn, with a hint of earth, firm acidity and a salty edge to its crunchy red fruits. There’s a hint of green – dried pine needle/tea tree too.  Going back at the end of the flight, pink grapefruit and rhubarb notes emphasise the coolness of the year.  Still, it is distinct – intensely perfumed, with this estate’s spicy resonance and granitic, earthy/mineral acidity.

On and off showers and temperatures in the low twenties resulted in good natural acidity and allowed the fruit to hang on for a bit longer, for body and alcohol.  Avani Syrah 2012 is crimson with purple flashes, opaque and bright.  It has delicious reverberation of savoury peppercorn with lavender and violet hints to nose and palate and juicy black and red berry fruit.  Fresh, persistent , well integrated, mineral, slightly earthy acidity makes for a dry (flavour-wise) palate.  Lovely length and intensity with grainy, granular even, tannins.  12.6%

Singh told me that this is the first vintage picked solely on taste (not numbers) which, interestingly, resulted in a markedly lower alcohol wine (11.6%).  I found the tannins were a little puckering; the 2014 has a smokiness which seemed different from the earlier vintages too.  Singh attributes it to using some new oak in this vintage.  Whilst it results in a loss of the fluidity, purity and delicacy compared with the rest of the wines in the line up, Avani’s tell tale spice, earth and minerals are also evident and the (black and blue) fruit is evidently ripe.  It just need time for the oak to integrate.  11.6%

This is the vintage that blew me away last September (my note here). Singh describes the growing season as “lovely…the temperature in March was perfect – like in 2012, not too hot.”  The peppercorn spiciness really tickles the back palate and, normal service (after the new oak of 2014) is resumed.  Avani Syrah 2015 is long and intense with lovely, fine, mineral acidity.  Fluid, very even, it holds the intensity all the way through.  A beautiful Australian cool climate Syrah.  12.6%

In this compact vintage, all the varieties ripened within a month of each other.  Bottled four months earlier, the 2016 was in youthfully brisk form.  Pale but bright with a vivid pink rim, it has crunchy fruit with pithy tannins and that biological highlighter or Avani DNA – a delicious seam of fine, mineral (granite/earth) acidity, which makes for a dancing, lively finish.  It seems lighter than the 2014 or 2015, which gives it early drinking appeal.  12.6%