I recently reviewed Moorooduc Estate’s current and forthcoming releases for Decanter Premium, additionally penning a producer profile.  It was good to catch up with father and daughter team, Richard & Kate McIntyre, whom I first met in Mornington Peninsula in 2010.   And to find out about Mornington Peninsula, Vintage 2020.

I enjoyed discovering that Kate, now a Master of Wine, got bitten by the wine bug early on.  Whilst her sister had ballet lessons, she would invariably accompany her father down to the vineyard from Melbourne after his hospital rounds, listening to the Goon Show.

Until researching the feature, I hadn’t appreciated that the surgeon had planted his first vines so early in the piece.  In 1983, he was at the bleeding edge of modern viticulture for Mornington Peninsula, alongside Garry Crittenden, whom McIntyre regarded as a mentor.

For many years, McIntyre juggled making his own wines with those of Ten Minutes by Tractor, so-called because the original three vineyards were 10 minutes apart by tractor.  The ‘uphill’ label, which Martin Spedding took over in 2003, has long specialised in single vineyard Chardonnays and Pinot Noirs.  Following a restructuring in 2010, Moorooduc have released single vineyard top tier wines from the McIntyre, Robinson and Garden vineyards.

My reviews focus on the 2016, 2017 and 2018 Chardonnay and Pinot Noir vintages, additionally the 2019 Pinot Gris on Skins – Kate’s ‘baby’.  Available nationwide, via the Vindependents network of independent retailers, Moorooduc Estate’s wines are well worth seeking out, both for absolute quality and their excellent price quality ratio.

As for 2020, you’ll find vintage reports from Moorooduc Estate, Crittenden Estate and Ten Minutes by Tractor below and my Decanter Premium producer profile of Crittenden Estate with a review of an extensive vertical tasting and current releases here. 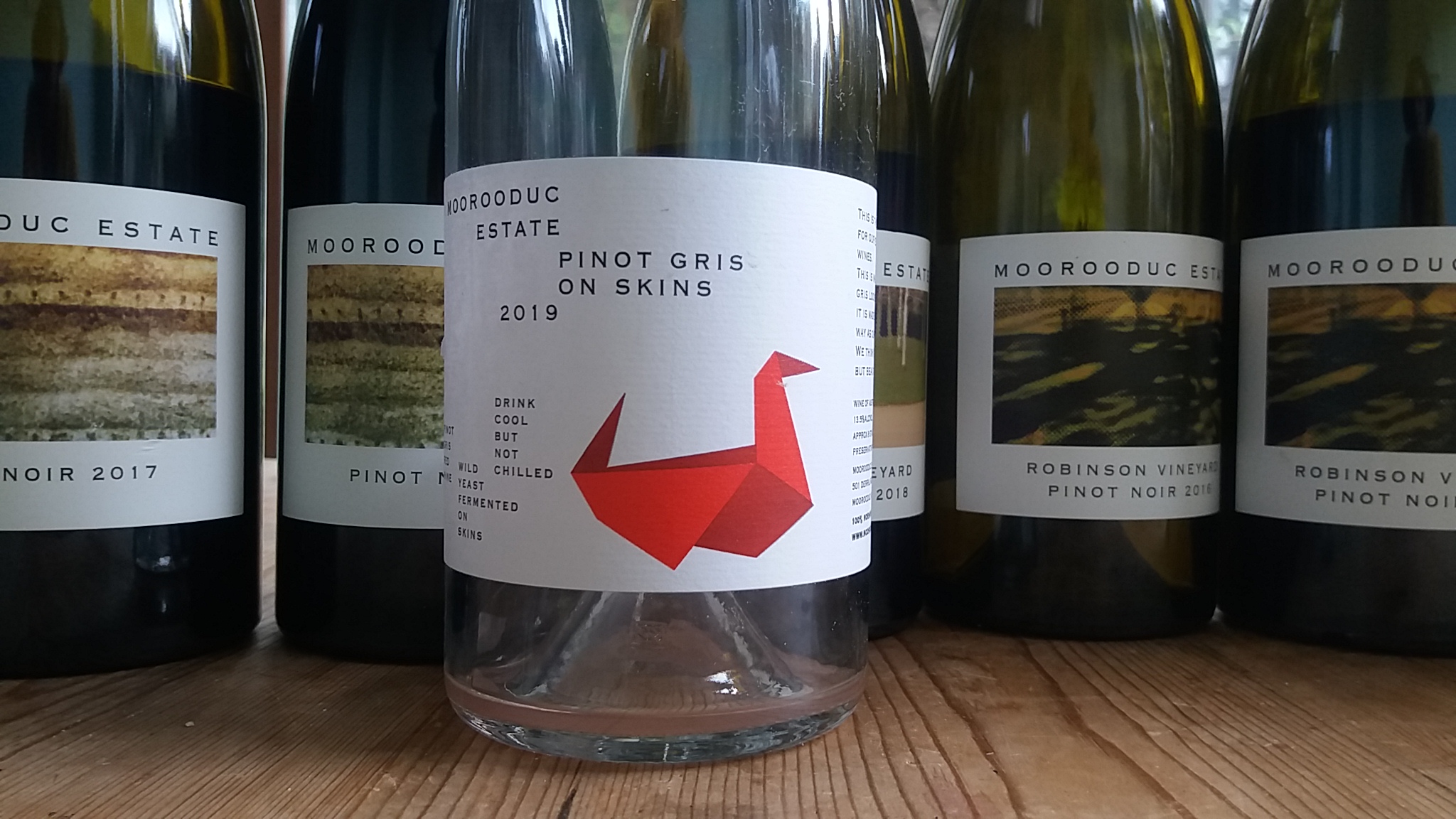 Including an ‘out-of-the-box Pinot Gris

“At this early stage, we think our 2020 wines will be of very high quality, albeit small in quantity. We are seeing wines going into barrel now with fine, intense flavours, good acidity and fine structure.

2019/2020 is the first cool growing season we have had since 2015, which seems counter-intuitive, when you reflect back on the news of Australia’s terrible fire season over the summer – we were very lucky, and the conditions here were quite different for us than they were for a lot of Australia.

The season started well, with plenty of moisture in the soil and moderate weather conditions.

Spring was unseasonably cool, with strong westerly winds resulting in some reduction of fruit set.

The drought conditions seen farther north of us extended south in mid-season, bringing the most rapid drying of the vineyard we have ever seen and, while we saw a short burst of extreme heat reaching 43°C soon after Christmas, and effectively pre-veraison, it cooled down significantly after that.

Usually January and February bring our hottest weather, but on this occasion mild conditions persisted over these months with intermittent rain events. Cool conditions in ripening time and lead up to harvest.

We escaped the bush fires and the resultant smoke taint seen in other parts of Australia at that time.

Vintage started on the 8th of March, three weeks later than in 2019.” 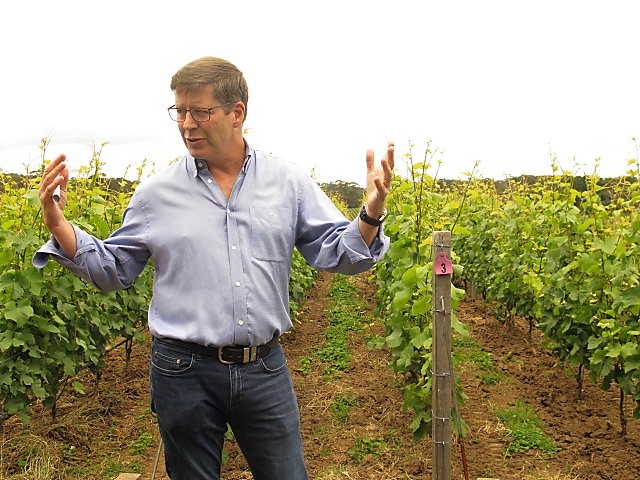 Martin Spedding at Ten Minutes by Tractor, in 2018 – a rather more abundant vintage than 2020!

While many parts of Australia suffered through one of the hottest and most devastating summers on record, we had one of our wettest and coldest

“It really was a year of extraordinary contradictions. While many parts of Australia suffered through one of the hottest and most devastating summers on record, we had one of our wettest and coldest. It was surreal to be looking out at our overflowing dams, rolling green hills and patiently waiting for a Summer that really never arrived, whilst watching the devastating fires on TV, some only 450km away.

The cold wet weather we had throughout the Spring (with a short reprieve in late September/October) meant that we experienced challenging conditions during flowering, that ultimately resulted in yields being down by between 40% to 80% on 2019 and around 50% on average. Many vineyards ‘up the hill’ in Red Hill, Main Ridge or Western facing vineyards had similar yields to 2014 (70-90% down!). As you can see on the chart I have attached, apart from a short period of warm weather at the end of December and early January, temperatures throughout Summer and Autumn were well below average on the Mornington Peninsula.

The attached chart is from the Cerberus weather station which is near Hastings – Ten Minutes by Tractor Vintage 2020 – Cerberus and UTH Pinot data. It is ‘down the hill’ and on the coast which is generally warmer and drier than Main Ridge. Unfortunately our weather station on McCutcheon was out of order for most of the summer, so we don’t have those records. Our rainfall can be up to 25% more than ‘down the hill’ and in 2020 I am sure it was. The other harvest data listed to the right of the chart is for Pinot Noir from our vineyards, ‘up the hill’ (McCutcheon, Judd, Wallis) compared to the last 20 vintages.

So, the summary on the season is; that it was cold and wet with moderate to small crops of good quality. The bunches were very small on average (Pinot Noir bunches were 40 to 90 grams versus 100 to 150 normally) but there was enormous variation from block to block, row to row because of the varied weather conditions during flowering. Flavours and intensity were very good, with smaller berries meant that there was a higher than normal skin to juice ratio. This was a year where having a sorting table was very helpful! Yields were well down, so there was plenty of time in the winery to sort and ensure consistent quality.

There will be some great wines made from 2020, a fascinating study in the variability of a season and the rich tapestry of terroir on the Peninsula. It is also a reminder of the size of the incredible diversity of all our 60 wine regions and the size of the Australian continent.

Unfortunately, for most of us, this year will not be fondly remembered because of the fires, low yields and this damn virus! The good news is, that when we gather again in the not too distant future, we will have some beautiful and vibrant wines to share when we reflect back and recount the endless stories and the crazy year we lived, in 2020.” 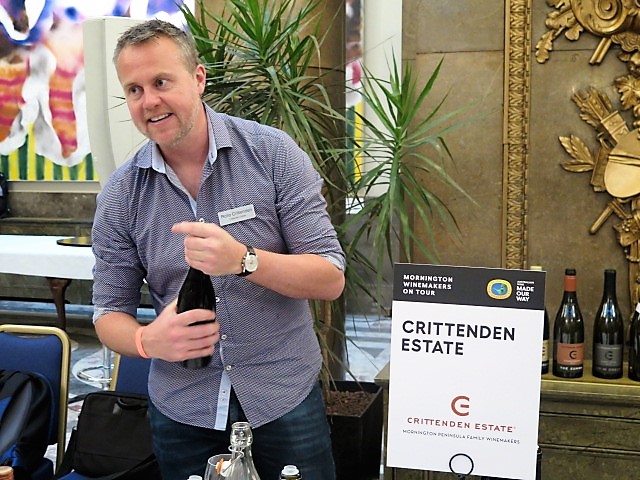 “Regarding the 2020 vintage, it has indeed been an excellent year on the Mornington Peninsula from a quality perspective. While yields were low (down by up to 50% on average at some of our vineyards due to poor flowering in November last year), the cool summer has made for a beautiful long ripening period and great intensity of flavour. Acid retention has also been a defining feature of the year with excellent vibrancy in both whites and reds of all varieties.

While some parts of Australia may have had to deal with the prospect of smoke taint and even vineyard losses through fires, we have been very fortunate in the Mornington region to have had absolutely no bushfire issues (including taint) whatsoever. It’s early days but thus far I’d suggest that 2020 on the Peninsula will go down as a very noteworthy year with the modest amount of wine produced being both delicious and age worthy.

Regarding the fires, the Victorian state government helped out this year by partially subsidising the cost of smoke taint analysis for wineries (which isn’t cheap). A few wineries took up this offer on the Mornington Peninsula (samples collated at Moorooduc Est.) but with all results coming back negative regardless of site and subregion I think that confidence quickly grew that we were collectively taint free and the rate of sampling and analysis quickly dropped off.

And so, when you look at the situation with the Mornington Peninsula, we did have maybe 4 or 5 days in January where there was detectible smoke in the air (you could smell it and see the haze), but this was prior to veraison with fairly low smoke intensity (compared to some), a long way from the source fires and not for an excessively long period of time (i.e. weeks). All of these factors have very luckily contributed to the avoidance of smoke taint in our region this year.”