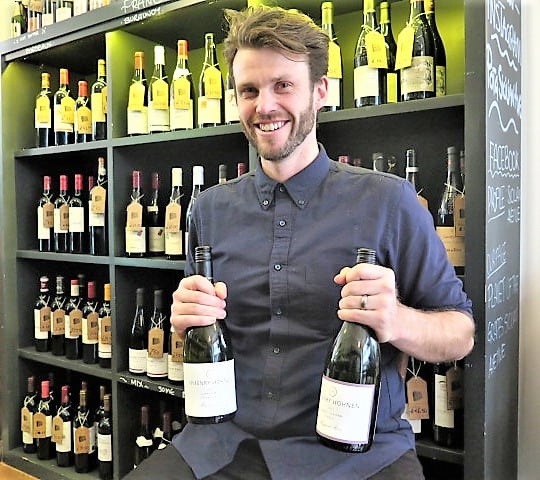 Changes are afoot at McHenry Hohnen.  David Hohnen has officially retired from winemaking for the Margaret River label he co-founded.  Taking on the mantle of Head Winemaker, Julian Grounds (ex-Giant Steps) oversaw his first grape to glass vintage in 2017.

Grounds has big boots to fill.  Hohnen was recently appointed a Member of the Order of Australia for significant service to oenology, the development of the Australian wine industry and as a promoter of the Margaret River region.  Prior to establishing McHenry Hohnen with his brother-in-law in 2004, Hohnen and his brothers established Cape Mentelle in 1970.  He is probably even better known for founding Cloudy Bay in New Zealand.

One might say it’s an indication of Hohnen’s faith in Grounds that his brief included introducing a Sauvignon Blanc to the McHenry Hohnen range.  It’s not the only newbie.  Describing Domaine Jamet’s Côte Rôties as “mind bending wines…the world’s greatest,” the new chief winemaker has a gleam in his eye when he tells me about the new ‘Syrah.’  Edgy and perfumed, it deviates from the more typically polished, fruitier Margaret River norm.  A new Chardonnay is a blend of three McHenry Hohnen vineyards.

Famously malleable, Chardonnay is something of a stylistic litmus test.  Grounds makes no bones about having been influenced by his time in Pouilly-Fuissé.  Though he is picking earlier for freshness at McHenry Hohnen, he describes himself as “very obsessed with flavour, rather than being caught up in acid and oak.”  The winemaker is also a fan of malolactic fermentation as “a fruit suppressant.”  Aiming for “texture and intrigue” over seamlessness, he favours slightly edgy wines, indeed has introduced unsulphured wines to the portfolio.

Visiting the UK for the first time in his new role, Grounds showed me his all-new 2017s.  You’ll find my notes below.  First, here’s Grounds’ take on the vintage: “[A]fter desirable conditions during flowering, the summer started cool and wet, slowing down the growing season significantly. Conditions improved in late February, developing into a perfect Indian summer. The result is whites that are packed with energy and poise, and reds that got the benefit of a long, cool ripening period; tannin ripeness and complex flavour developments. Alcohols are lower than previous years, even with greater physiological ripeness.”

McHenry Hohnen wines are imported into the UK by Louis Latour Agencies.

In Margaret River, Sauvignon Blanc is traditionally blended with Semillon.  However, the Burnside vineyard is located in the cooler, southern end of the region and, dry grown since it was planted in 1981, is low yielding. Grounds was encouraged to see if he could “tweeze something different” from a Semillon/Sauvignon Blanc blend from this mature, organically cultivated vineyard.   Rejecting the classic New World protective winemaking style, which emphasises aromatic expression and fruit, Grounds stuck to his mantra of flavour with texture and intrigue.

To that end, the fruit for this Sauvignon Blanc was harvested and destemmed straight into concrete vats, where it underwent five days of wild yeast fermentation whilst sitting on skins (with no extraction during this period), before being dug out and pressed straight to a 2800l French oak cask (with all solids). Once fermentation was completed (this wine underwent a partial wild malolactic fermentation), the wine was stirred regularly to build texture, with the addition of Chardonnay lees to increase complexity, before sulphuring in early spring. The wine was racked and clarified in December and bottled without filtration in January.

It’s a pale Sauvignon but well leveraged with flavour.  It has a bay leaf touch of spice/pungency and hint of vanilla bean to the nose (quite restrained, more Sancerre than New Zealand), with ripe, round gooseberry, creamier fresh white asparagus and a splash of sweet, dried herbs (Margaret River sweet methoxypyrazines).  As it opened up, it seemed to stretch out, mellow even, the ripe acidity persistent but never pushy – very much part of the fabric of the wine (a stylistic trait of Grounds, based on this tasting).  Nice balance and rolling mouthfeel, whilst retaining line and decent length.  I took the samples home to taste and, with its texture and substance (the oak lending structure over flavour), this Sauvignon worked brilliantly with a fennel and pea risotto, the fennel hearts pan fried in butter and caramelised, the outer layers a touch al dente.  Not bad for a Monday night supper!  pH 3.18 TA 7.5 Alc 13.1%  RRP £12 – great buy.

Both at Giant Steps and at McHenry Hohnen, the focus has been on single vineyard Chardonnays.  Grounds is keen to continue the tradition and make the very best expressions of each of the producers’ three vineyards.  In 2017, a cooler, more productive year, he had grapes left over following the selection process, which gave rise to this new cuvée.  In 2017, Laterite Hills is a blend of 45% Burnside Vineyard, 35% Hazel’s (formerly Rocky Road) Vineyard & 20% Calgardup Brook Vineyard.

The fruit was hand picked and 100% whole bunch pressed, before undergoing wild yeast fermentation in French oak barriques (20% new). Grounds likes phenolics and incorporated some press juice.  The barrels were left unsulphured until September and some underwent wild malolactic fermentation. Wines were transferred with full lees to a single tank for five months on full lees – “super-reductive,” said Grounds, so none of the oxidation you get in a barrel, “but with all that textural pick up.” The wine was then clarified and bottled unfiltered in January.

The Syrah is Grounds’ baby and has intrigue and texture by the bucketful.  Next to the winery, Hazel’s vineyard was planted in 1998 and cultivated biodynamically.  The Syrah is hand-picked from a single block in the warmest part of the vineyard – “the artichoke heart,” said the winemaker.  It is located on coarse lateritic soils with a northerly aspect.

The fruit was hand harvested mid-morning. A foot stomped pied de cuve (vineyard specific yeast culture) was placed on the bottom of a 4 tonne concrete fermenter. The fermenter was then filled to the brim with whole bunch fruit. The fermenter (open, so there was just a bit of carbonic maceration in the middle of the ferment) was pumped over 3 times daily for 8 days, before a further 5 days of maceration without any pump overs (sealed with a lid). Grounds likes the temperature to get hot to ferment the stems (“I want to avoid tobacco leaf/stemmy flavours”).  After pressing, the wine was aged on lees in an eight year old 2800l French-Oak foudre for 9 months, before racking and a small sulphur addition. The wine was bottled without fining or filtration.

I loved the nose of this wine, so perfumed and complex, with pepper and tapenade, prettier violets and lavender florals and a dash of volatile acidity to tickle the nose.  Thoroughly enticing.  On the palate, I was expecting more of an acid-driven vin de soif style, but I should have remembered the T word – texture.  Aged on the lees the whole time, the tannins are meaty and softly mouthcoating – grainier as the wine opens up.  Grounds’ aim is to balance high acidity by coating the tannins with lees, which means they become very much part of the fabric of the wine, melding with the black cherry and berry-streaked fruit.  It makes for a distinctly dry, savoury, touch funky (in a good way) palate, shot through with white and black pepper, flowers and porcine charcuterie.    Super-interesting, if youthfully raw and still coming together, it is not as consensual as its stablemates, but I’d stash it away for a year or two because I think this edgier wine will reward patience.  I asked Grounds for his take on the drinking window.  Given Australia’s harsh ultraviolet light, which enhances tannin quality, he is all for enjoying it now (indeed, it’s an objective) but, he observes, “whole bunch wines will go through phases and then plateau and hit their stride.”  Suitably intrigued!  12.9% RRP £18

Follow these links for earlier reports on McHenry Honen visits/tastings: