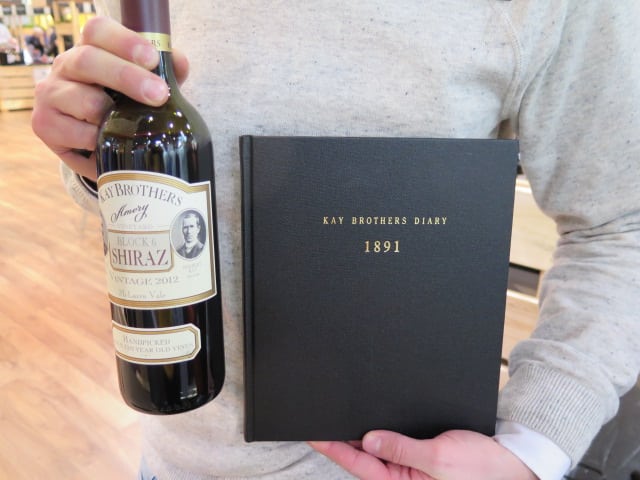 In my last McLaren Vale post I focused on the South Australian region’s new wave Grenache.  Thrilling stuff.  But an old timer caught my attention at Prowein too.  Plush of mid-palate, Kay Bros’ rich and velvety Amery Block 6 Shiraz is a classic; both vintages shown – the 2015 & 2012 –  fully lived up to expectations.  With its strong familial bond, the baby of the range – Basket Press Shiraz 2016 – struck me as a great buy.

Both wines are 100% estate-sourced from the Amery vineyard.  Purchased by the Kay Brothers in 1890, it is the oldest McLaren Vale winery still in founding family hands. As you can see from this history page of their website, Kay Bros’ detailed records provide a vivid insight into the planting of the vineyard and production.  Which is why it can be said with some authority that Block 6 Shiraz eked out one of its lowest yields (3.45 tonnes) of the century in 2015.

Block 6 – a 3.5 acre parcel – was planted in 1892 and,  in 1984 Cuthbert and Colin Kay decided to vinify it separately.  The Basket Press hails from 15-20 year old vines. Describing why the vineyard has stood the test of time, Chief Winemaker Duncan Kennedy told me “[T]he rolling slopes of the Amery vineyard have very special and complex terroir made up of many different geologies and soil types. Most of the vineyard faces East which keeps the vines protected from the hot Western sun and allow retention of natural acidity. Local gully breezes keep disease pressure low and proximity to the Gulf of St Vincent provides a sea breeze on warm afternoons.”  All of which goes to explain the length, flavour intensity and balance of these Shirazes.

The fruit (100% estate-sourced, from 15-20 year old vines) was harvested from the 17th of February to the 8th of March – quite a window, which I suspect accounts for the lovely balance of this wine. It was immediately crushed, de-stemmed and hand plunged utilising open top fermentation. Following 9-12 days on skins, it was pressed in Kay Bros’ 1928 basket, then matured in a combination of American, French and Eastern European oak barrels for 13 months. It has the mulchy, savoury softness and sweet dried spices I associate with this vineyard.  Similarly, the fruit is velvety and the tannins fine, very smooth.  Lithe in the sense of pliable, very motile, with a brightness to its blackberry and sweet plum fruit despite the overall mellow, open-knit feel. Long on flavour and very pleasing in the mouth, with a lick of mocha on the finish.  Ready to go!  14.5%

Block 6 vineyard faces east and rows run north south with significant undulation. Vines are spur and cane pruned with the canes wrapped onto the top wire of the low lying trellis.  The soils comprise a corner of red loam, some heavy clay in the middle of the block and gravely alluvial soils on the lower side. The underlying “South Maslin Sands” geology is extremely complex containing layers of glauconite, limestone, sandstone and siltstone.  Block 6 2015 was harvested by hand on the 16th of February. The grapes were crushed, de-stemmed and plunged twice daily while spending 14 days on skins in traditional open fermenters. The wine was then basket pressed and matured for 23 months in 40 % new French and American oak puncheons.  This is a very young wine, with masses of back palate intensity, as if the fruit and flavours are queueing up for slow release.  The tannins are ripe but spicy and youthfully firm – primed to meet the charge of fruit as and when it is delivered. Liquorice, loam, mulch and mineral notes loiter with intent on the finish.  Everything to come.  And the 2012 is instructive.  Terrific potential; chock-ful of gravitas.  14.5%

This is a favourite vintage, long and even with no heat spikes.  It produced some beautiful wines of great purity and persistence.  Block 6 is no exception.  With a few more years under its belt than the 2015 (for Kay Bros, the best vintage since 2012), it is so much more expressive and supple.  It starts as it means to go on, with a ravishing perfume of sweet black cherry and plum and a shower of five spice, with the accent on clove and anise.  Lovely layers, whose number includes subtle coconut and a hint of singed radicchio – incipient mulch?!?  A ripe but very persistent undertow of acidity and fine, immersive chassis of tannins tease out the flavours and perfume, which linger, seemingly radiate, on an uber-long finish.  Beautiful example of the genre. 14.5%