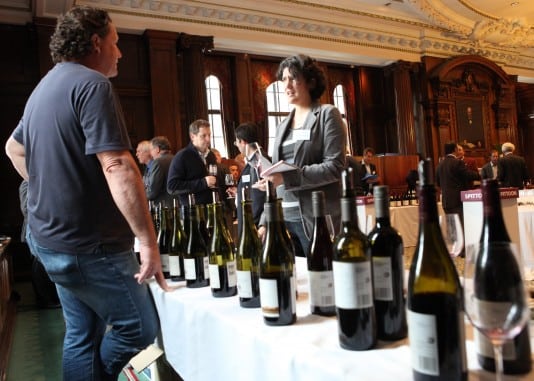 Friday retro-post: Torbreck – from Juveniles to The Laird

In Wednesday’s post I reviewed some thrilling new additions to the Barossa/Eden Valley wine scene from Powell & Son – Dave Powell’s and his son Callum’s new label. It was interesting to compare and contrast the wines with those Powell senior made at Torbreck, especially having recently written up Torberck Runrig and The Descendant 2012 for an upcoming Decanter Expert’s Choice.  These full on, hedonistic 15.5%/15% abv Shirazes under-scored how, while sharing Torbreck’s sensuality (the flesh and achingly refined tannins), Powell & Son’s wines put greater emphasis on savouriness and restraint.  And without, as Powell senior put it to me in 2011, putting a square peg in a round hole (rather, the father & son’s 2014 single vineyard Shirazes are from Eden Valley).

Here are my notes on the Torbreck range which date from a tasting back in 2011 (when Powell was still at the company).  Watch out for the upcoming Decanter Expert’s Choice for my notes on 40 top Australian wines from Langton’s Classification of Australian Wine, including Torbreck Runrig 2012 and Torbreck The Descendant 2012.

Torbreck’s Dave Powell is renowned for not pulling his punches and, though the photo suggests otherwise, I enjoyed his directness!  It was good to meet him and catch up with his beautiful Barossa wines both at UK importers Fells’ portfolio tasting and over a press dinner later that week.

As intense and involving as their maker, Torbreck wines deserve and demand quality time.  In fact I left a few glasses of The Laird, The Pict and Les Amis to unfurl with Powell while I completed the tasting, and it was good to retaste, drink them even (!) at dinner.  Especially the whites, which benefited from being served cooler than an open pour tasting typically allows.

Though Powell found questions about alcohol levels provocative, for me, the fact that his wines are so balanced at 14 to 15.5% abv is a measure of his resounding success.  I was particularly impressed with the vivacity of his 2007 wines.  He’s also got a point when he says of early picked lower alcohol Barossa Shiraz “don’t try and fit a square peg in a round hole…if it’s not ripe, go somewhere else.”

Here is a bit of background about Torbreck Vintners which was founded by Powell in 1994, followed by notes on the wines. Powell is a graduate of Rockford whose owner, Rocky Robert O’Callaghan, is renowned for his small batch, handcrafted philosophy.

While working for Rockford, Powell discovered and successfully nurtured back to life a few parcels of dry-grown old vines.  In return, he made wine from the fruit, establishing his own label, Torbreck.  From this standing start, he has gone from processing fruit from 5 acres to fruit from 200 acres.  Suffice to say that the wooden shed has long since gone.

Powell draws on a rich resource of 26 different vineyards (click here for the map), kilometres apart.  His range features single vineyard wines, sub-regional wines and inter-sub-regional blends, all from the Barossa Valley floor save one, The Gask, from Eden Valley in the Barossa’s eastern ranges.

In his opinion, because the Barossa is a warm region, it’s important to blend different sites for balance.  The exceptions to the rule are the cooler Eden Valley and a handful of exceptional sites on the Barossa Valley floor.

Within the Barossa Valley, Powell focuses almost exclusively on vineyards in the north-west Barossa.  He tells me “I don’t like the east,” preferring the north west for its slight rainshadow, which means it’s drier and yields are lower.

He’s also very wed to terra rossa soils, deep red clay over limestone and it’s no coincidence that the three easterly Vine Vale vineyards from which he sources fruit are on a band of red clay.

Varietal blending is another means of building complexity into the wines.  Shiraz appears solo or is blended with Grenache and Mataro (Powell is insistent on using the Australian name for the grape as opposed to Mourvedre), also Viognier and Roussanne.

The wines are also matured in a variety of formats. Save for Torbreck Juveniles which sees no oak, he uses barriques through to 4500l foudres; he’s very excited by the extra thick staved barrels in which his flagship wine, The Laird, is aged.  Saying ”I don’t mind seeing oak as long as it’s not the star,” going forward Powell would ideally like to move entirely to foudres.

You’ll find my tasting notes below, together with UK RRPs and stockists.  (The wines were tasted solo on 20th September then over dinner on 22nd September).

Unmistakably Barossan, this luscious Semillon has plenty of mouthfeel and a lick of toast and sweet cinder toffee to its buttery lemon and lime curd palate.  Generous but balanced, Powell told us it’s sourced from the so-called Madeira clone, whose grapes have a pinkish tinge and hold their acid well.  14.5% abv £17.99

Powell planted 5 rows of each variety on own roots in 1994 at the Descendant Vineyard, Marananga. Unusually for Australia, Roussanne very much makes the running here, comprising 63% of the blend (with 21% Viognier and 16% Marsanne).  Powell says it just makes more sense in the Barossa’s warm climes and, when you think about it, though all three grapes feature in the northern Rhone, only Roussanne makes the cut for Chateauneuf-du-Pape in the warmer south.  Naturally leaner in style, Powell preserves this quality by eschewing oak for the Roussanne.  The Marsanne and Viognier are fermented and aged in older barrels.  Despite its terrific charge of rich, ripe apricot and fruit salad on nose and palate, it holds its line, showing a delicate fennel edge to the finish.

Intensity, texture and layer are ratcheted up another notch or two with the flagship white (which has been re-named The Steading from 2010), a blend of 55% Roussanne, 25% Marsanne and 20% Viognier.  While the Woodcutter’s RMV is exuberantly fruity, this wine reveals its hand more slowly, showing heady casablanca lily and honey hints to its subtly creamy, leesy palate.  A fleshy yellow plum core is edged with green tomato and pithy, orange and grapefruit peel notes, making for a balanced seamless wine with a deliciously stony, mineral finish.  Powell says earlier vintages tended towards an oiliness but, since the André Perret Viognier clone came onstream in 2008, the wine has shown greater delicacy.  Fabulous with my first course of crab ravioli with samphire, brown shrimp, fondue of leeks and bisque sauce.  14% £30.99

He may produce The Laird, Australia’s most expensive wine but make no mistake, plenty of love, care and attention is lavished on each and every wine including this, his entry level Shiraz. It’s a joyous affair with classic jube notes to its fleshy red and black fruits which are, less classically, lifted and layered with damask to nose and palate. A fluid, perfumed, heady beaut. 15% £18.99 (though I notice it’s currently £16.95 at Wine Direct)

This wine is made from the same parcels of fruit as Cuvee Juveniles.  Half goes to tank and stays in tank for Juveniles.  The Steading half is aged for 24 months in old French hogsheads.  Powell says it’s partly the vintage (2008 was warmer), but here there’s more emphasis on black fruits and the fruit is layered with savoury, spicy notes.  This greater dimension of flavour together with the structural impact of the oak makes for a weightier, more serious wine.  15% £31.49

Also 100% Shiraz, The Struie is a blend sourced 2/3 from the Barossa Valley and 1/3 from the Eden Valley.  It shows fleshy but well-defined red and black berry fruits edged with pepper and spice, milk and dark chocolate.   A meaty, soy undertow makes for a savoury finish well supported by ripe but present, slightly sinewy tannins.  Youthful but very food friendly.  15% £38.99

Powell describes this intense 100% Shiraz as “the most Barossan wine I make.”  It’s rich and densely layered with concentrated crème de cassis, blackcurrants, liquorice, warm earth and tar, dark chocolate and supple leather.  Though I detected some floral top notes on the long, lingering finish, the overwhelming impression is dark and brooding.  In a word, satisfying – the vinous equivalent of steak. 14.50% £84.00

This wine hails from a single vineyard located next to the winery and planted by Powell in 1994 with cuttings off old RunRig vineyards.  It has the distinction of being the Barossa’s first Shiraz/Viognier blend and it’s a textbook example, aromatic with jube and dried sage on nose and palate and a fleshy core of blood plum fruit.  Juicy, succulent, scented and supple, one sees the connection with Cote Rotie, the so-called Burgundies of the Rhone. 14.5% £84.00

This single site Seppeltsfield Grenache is a tour de force in the spice department, with layer after layer of white pepper, star anise and floral notes.  Quite magical. In fact so entrancing and seductive with its gossamer tannins to boot that I hardly missed the as yet impenetrable fruit.  Would dearly love to see how this develops.  A truly exciting, highly individual wine.  15% £119.00

This 100% Mataro comes from a single plot of vines in Northern Greenock – the Materne ‘Quarry Block’ Vineyard, which was planted 1927.  Amongst very stiff competition, tis my pick of the bunch.  Savoury yet fresh, its seamless, layered, long and lingering delivery tantalised the taste buds with saddle soap, leather, liquorice, minerals and reverberating dried spice.  Another wine for the long haul, yet so expressive already. Gloriously intense!  With reference to its freshness, Powell says he really rates Mataro for the fact he never has to acidify. 15% £119.00

Runrig is a Shiraz blend of old vine fruit from the Barossa Valley subregions of Marananga, Greenock, Moppa, Gomersal, Kalimna & Ebenezer.  A splash of Viognier (2%) adds to its aromacy.  It positively explodes with layers of spice to nose and palate.  Saturated with ripe but succulent fruit, underscored by minerals and framed by ripe but present tannins, it’s sumptuously textured through the mid-palate and finishes long and tapered.  The best is yet to come for this beautifully weighted, balanced wine – no mean feat in 2007.  15% £147.00

The Laird, an Australian icon, has the dubious distinction of being Australia’s most expensive new release, and that was for the maiden 2005 vintage!  Dubious in the sense of icon, is that one word or two? But there’s no doubting the quality and sheer beauty of this wine.  It lived up to the blue sky expectations of its price. Whether you can afford to shell out for it is another matter. The Laird is a single vineyard Shiraz made from 70 year old vines from Malcolm and Joylene Seppelt’s old Gnadenfrei vineyard in the sub-region of Marananga.  Powell says he doesn’t know what makes this 2ha vineyard on terra rossa soils so special.  It just is.  And aged for 36 months in Dominique Laurent’s ‘Magic Casks’,it gets the Rolls Royce treatment.  Powell tells me Laurent hand selects very tight grain trees and, with 45mm extra thick staves (25-27mm is standard), oxidation and leaching of tannins is very slow.  The resulting wine is wonderfully svelte, with super supple tannins making for a seamless integration of oak and fruit  –  Laurent’s oak may be special, but it’s the supplicant to the all absorbing fruit.  The Laird positively ripples with fresh and creamed black and blue berry fruit, interlaced with lavender, blossom and minerals. Beautifully melded and modulated despite its great intensity and concentration, I loved its “at oneness.”  15.50% c. £400.00 in bond.