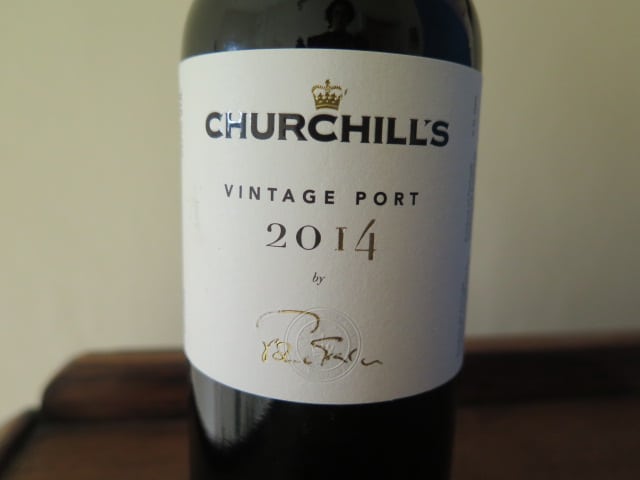 Following hot on the heels of my post about Quinta do Noval Vintage Port 2014 (and Nacional 2001, also just released), here’s my report on one of the other few Port Houses to declare the 2014, Churchill’s.  The declaration coincides with the 35th anniversary of Churchill’s Port, which was founded by John Graham in 1981 and was the first British Port Wine company to be established in 50 years.

Declaring a Vintage Port in 2014 was not the only unusual decision.   The “uniqueness” of the vintage is celebrated with a slightly different label (with the signature of founder/winemaker Johnny Graham) and atypical formats.

Churchill’s Vintage Port 2014 has been bottled in magnum or half bottle only. “Although excellent, the vintage was small so we decided to focus on half bottles and magnums only,” explained CEO Maria Emilia Campos.

The vintage: “The 2014 vintage promised to be exceptional until mid-way through harvest when torrential rains fell. Luckily we had decided to pick early, before the rains struck, have been rewarded by a small but spectacular crop.”

Winemaking: Foot trodden in granite “lagares.” The treading teams working throughout the day and up to 10pm each evening. During the first six months, the young Port spent the winter months at Quinta da Gricha in oak vats, before being transferred to Churchill’s lodges in Vila Nova de Gaia, where it was stored in a stainless steel tank until being bottled.

Tasting note: A field blend sourced from very old vines in the Douro Superior and Cima Corgo sub-regions, Churchill’s 2014 has a brooding, dark nose, which slowly gives up nuances of black pepper, violets, smoke and bitter chocolate.  The palate is more expressive/motile, with dark, very intense chocolate ganache, black berry, cherry, raspberry, perfumed kirsch and a hint of cinnamon.  As you’d expect from this year it has lovely freshness/persistence.  Though very fine, the tannins build plume-like in the mouth on a spicy, mineral, savoury finish. A Port with serious intent or, as Johnny Graham puts it “more of an ‘old-school’ vintage…it has, what we used to call in the Trade, a steel girder or backbone which will ensure the excellent longevity required for maturing a classic Vintage Port”   20%  102g/l residual sugar.