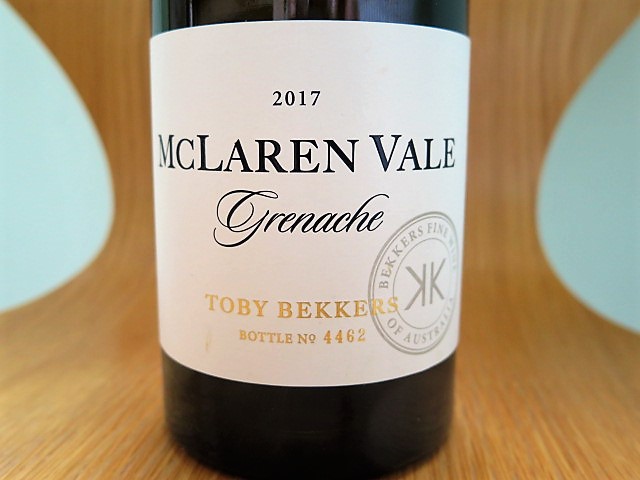 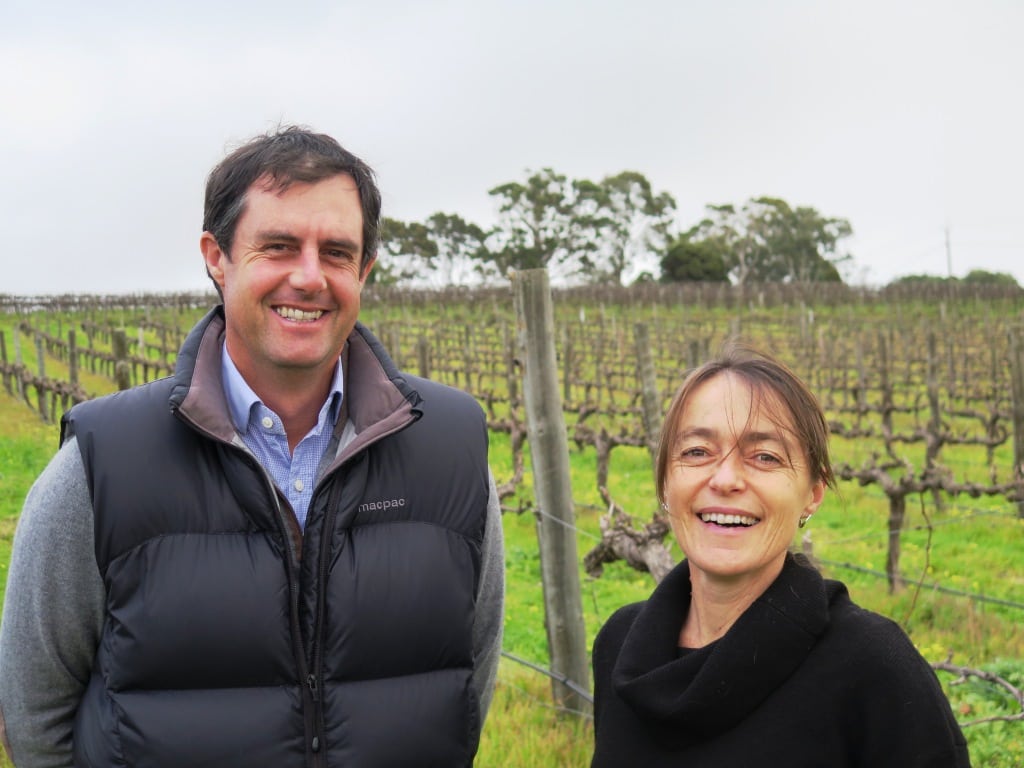 I have greatly enjoyed the Grenaches I have tasted from the unusually cool 2017 vintage. Toby and Emmanuelle Bekkers’ Grenache is a favourite and, suffice to say, the 2017 vintage (and of the Syrah Grenache) did not disappoint.

In the press release which accompanied the samples, the Bekkers come out strongly in support of Grenache as the variety “with which McLaren Vale will stand proudest.” Regular readers will guess that I’m of similar mind.  Explaining why, the couple go on to say “[L]ate ripening and medium-bodied, Grenache augments the signature of vintage and vineyard more keenly than Shiraz.”

I’d been keenly anticipating Bekkers’ 2017 release.  Not just for the interesting, cooler year (“the latest harvest of recent times”), which plays heavily into the warm climate Pinot Noir style I enjoy so much (even at 15% abv!)  But also because Bekkers Grenache 2017 introduces a new (third) vineyard into the blend, in the elevated Onkaparinga Hills.

The fruit is sourced from 1930’s and 1960’s dry farmed vineyards in Blewitt Springs (98-107m) and Kangarilla (240-244m) on deep bleached sand over ironstone gravel and orange clay and Onkaparinga Hills (186-201m) on brown clay-loam and slaty siltstone.  Harvested 20th March and 7 & 23 April, each parcel was fermented seperately, with 20% whole bunches, the balance fermented whole berry after a 5-6 day cold soak.  The wine was aged on fine lees for around a year in aged French oak 500l puncheons. You pick up the minerality of the wine from the off.  Even the nose has a crystalline quality, together with pretty violet florals.  On both days of tasting (the same bottle), this medium-bodied Grenache’s  minerality shone through, finding echo in its sandpapery underlay of tannin.  Hard to believe its weighs in at 15% alcohol.  Whilst the fruit has a sweetness, even a touch of orange peel (for me a indication of ripeness) and, as it opens up, becomes sleek, creamy almost, its red cherry, raspberry and blackberry fruit retains line and definition.  The palate is distinctly fresh-fruited, which keeps the sweetness in check too.  With plenty of nuance and structure, this is a typically refined offer from the Bekkers – made to age, though it is damn difficult to resist now!  I’d love to see it again in 10 years.  15% AUS$80 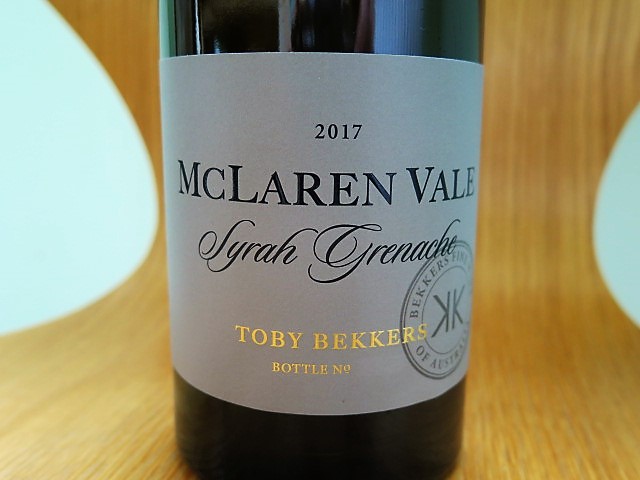 Talking of ageing, the Bekkers’ press release mentions how, over 20 years of tasting some well-cellared McLaren Vale wine, they have observed that blends of Shiraz and Grenache, as opposed to single varietal Shiraz,  have cellared better in many cases.  The couple posit that this is perhaps down to the tannin profile, natural acidity or fragrance of the Grenache.  Doubtless this explains why they have increased the percentage of Grenache, making the 2017 “deliberately a little lighter framed.”   Whilst the Grenache portion has increased, this blend’s emphatic blackberry, black cherry (close to the stone), fleshier plum and (red) liquorice point to Syrah.  It has a reductive peppery, meaty, graphite note too (I picked up some ‘pingy’ saddle soap on day one too, which I usually associated with Mourvedre), which pins back the fruit a touch and, with the Grenache’s pippy raspberry and raft of sandpapery tannins, lends freshness to the palate.  Lovely fluidity and grace.  Bekkers Syrah Grenache 2017 is a blend of three Syrah vineyards (two in Clarendon at 194-242m & 309-329m, one in Seaview at 102-122m) and the same Onkaparinga Hills’ vineyard which contributed to the single varietal Grenache.   The fruit was harvested on 21 March and on 6, 7 & 13th April and naturally fermented separately (with 15-20% whole bunch, the rest whole berry), following a 5-6 day cold soak. It was aged for around a year on fine lees in seasoned French oak barrels (300l & 500l) and blended and bottled in August 2018.  14.5% AUS$80