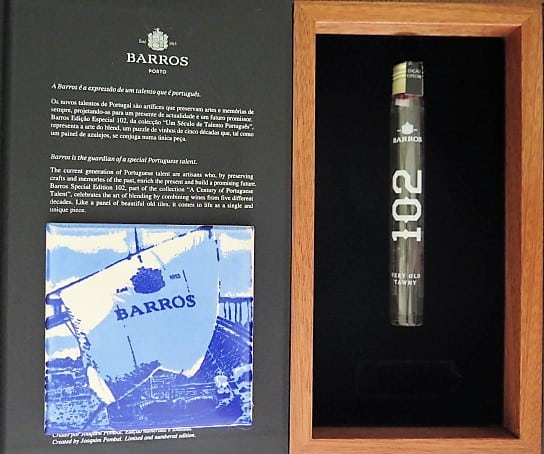 Barros 102 Very Old Tawny Port is a blend of five Colheitas produced over five decades – from the 1950s  to 1990s.  The grapes were sourced from Quinta da S. Luiz’s old vines at an altitude of between 200 and 400 metres and, following a traditional vinification (in lagares), the resulting wines were aged in Barros’ Port lodge in Vila Nova de Gaia in small, 300l oak casks.

It was interesting to taste this Very Old Tawny Port hot on the heels of Kopke CNK Very Old Tawny Port, also from the Sogevinus stable (and also blended by Carlos Alves).  The Kopke, released to celebrate this house’s 380th anniversary, included older colheitas – back to 1900.  True to house style and the more aged blending components, the Kopke was an edgier wine, with a touch of “vinagrinho.”  The Barros, on the other hand, is most mellifluous, with silky, honeyed apricot (rounder than Kopke’s citrus) and Hors d’âge Cognac-smooth, superbly integrated spirit. Ever so long – delightfully lingering – with lightly nutty amaretto and toasted coconut lift and resonance to the finish.  Such a light smooth touch, yet so much intensity and carry.  Stunning.  20%, pH: 3.48, TA 5.38g/l, Residual Sugar 146g/l.