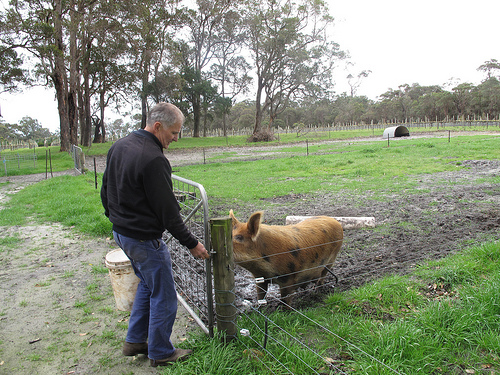 Visiting with David Hohnen 2009 – down on the farm

Visiting Margaret River last November, I received an intriguing email from David Hohnen AM, subject-matter “slip the leash.”  The acclaimed winemaker has always been associated with estate wines – Cape Mentelle, Cloudy Bay, McHenry Hohnen – but, recently, he has himself slipped the leash.  Some might say ‘gone rogue.’  These days, he is a negociant, which is why you’ll find his signature on Sainsbury’s Taste the Difference Western Australian Shiraz 2018.

And it’s why we sped north, up the highway, edging inland, away from Margaret River’s boutique cellar doors.  Our destination?  The region’s largest custom crush winery in Jindong – an altogether less bucolic experience than my last visit with Hohnen (pictured) when, chewing the cud at his farm, we talked ‘grandpa farming.’

With his daughter Freya (who oversees blending), Hohnen has joined in a wine-broking business with former Veuve Cliquot colleague, Ruper Clevely (founder of Geronimo Inns).  Crackerjack Négociants sources wines from the South West of Western Australia (and Bordeaux) for ‘buyers own’ brands or Crackerjack’s proprietary label.  He told me, the aim is “bringing diversity in the Western [Australia] offer and, in the long term, bringing success to sub-GIs not at this point on the radar in Britain.”  I’ve visited a good many of those sub-GIs and it’s a laudable aim – there are some lovely wines being made in the South West.

Some months prior to my visit, Hohnen had sent me a sample of a smartly blended 2017 Sauvignon Blanc made for Aldi’s Exquisite Collection, priced at just £5.99.  Sourced from Frankland River, a splash of the region’s star white variety, Riesling, gave it a lively kick of lime and lift in the tail.  Having previously discussed with Hohnen how Western Australia (“WA”) is not set up for volume brands (it does not have the irrigation infrastructure of the Riverland, Murray-Darling or Riverina), I was curious about this new direction.  Specifically, whether such price points are sustainable for a region which,  says Hohnen, accounts for just 2% of Australian production.  Additionally, did he have any concerns about undermining Western Australia’s much vaunted premium reputation?

Margaret River is not farming land, it is real estate

Although he admitted that pitching at such price points “is difficult,” Hohnen emphasised that, whilst Margaret River is heavily associated with WA wine, there is a big distinction between it and the other regions.   As he sees it, “Margaret River is not farming land, it is real estate” where, he added, “costs for any poor mutt trying to farm are high.”  On the other hand, elsewhere, “big and small vineyards enjoy the economies of being located in our mixed farming localities.”   Even if, referencing our canine friends again, Hohnen told me putting together this Sainsbury’s Shiraz “was like rounding up a bunch of kelpies with a blue heeler.”

Through clever blending and use of oak staves and ‘biscuits,’ not barrels (see below), Hohnen’s aim is to bring WA wines into the realm of the “everyday wine drinking Brit.” Sainsbury’s Taste the Difference Western Australian Shiraz 2018 totally nails the brief.  And I suspect Hohnen is right when he says, “[T]his might be the first time that British wine drinkers who shop where most of the wine in Britain is purchased, will be offered a South Western Australian Shiraz in a supermarket.”

Biscuits with your Shiraz?

Hohnen told me “to make a wine that offers a great drinking experience at a great price and from a very recent vintage, counts out the option of ageing in oak barrels. The wines are aged with oak in the form of biscuits and staves. I am a proponent of this method of adding oak flavour and aroma to complex a wine. The process of toasting staves or biscuits is no different to roasting coffee beans and can be achieved with a high degree of predicable results. It has huge economic and gustatory benefits for a consumer.” (And it helps that Freya represents the barrels and oak products of Francois Frères and Demptos. Her father observes, “[H]er most popular stave is the Eco Impact, which can impart flavour, aroma and texture components in 10 to 12 weeks.”)

Sainsbury’s Taste the Difference Western Australian Shiraz 2018 is a really super introduction to WA’s bright-fruited, elegant style – quite different from similarly priced less nuanced, supermarket Shirazes (which typically come from warmer South Eastern Australia or South Australia regions).  And, due to hit Sainsbury’s shelves on 31st March, it is an absolute steal for £7.50.  Suffice to say I included it in an upcoming Decanter Expert’s Opinion on Australian multi-regional blends. 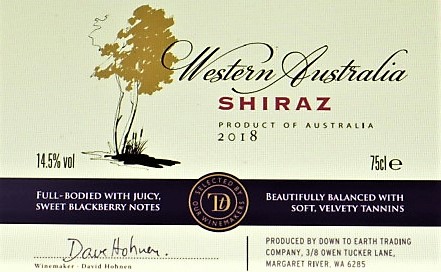 This smooth but characterful Shiraz shows good depth of colour, with cool climate black pepper, earth and meaty, reductive nuances to its juicy blackberry and plum fruit.  Six months’ ageing with new oak (staves and biscuits) lends creaminess, a balancing sweetness, through the mid-palate.  Finishes savoury, with Western Australian freshness and elegance and showed well over both days I tasted it (as it did when I first tasted it at the winery, shortly after it was blended). The fruit (Shiraz 93%, Cabernet 3%, Merlot 2%, Others 2%) came from eight producers in the sub-GIs of Blackwood Valley, Geographe, Frankland River, Mount Barker and Margaret River.  It was harvested in the cool of the night by machine.  A small percentage of grapes were cold soaked before it was fermented in tank (reductively), to maximise fruit expression.  A portion underwent extended skin contact.  14.5% Available in Sainsbury’s from 31st March priced at £7.50, though I am reliably informed that it will be offered at an introductory price of £6.50 for a short period.