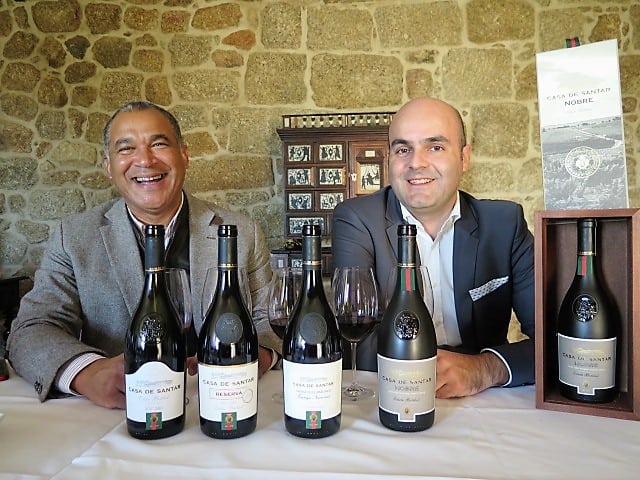 As befits a company called Global Wines, the portfolio is huge, over the years spiralling to cover six Portuguese regions and San Francisco Vale in Brazil.  Once upon a time, it even made quirky international blends like Dourat (Douro/Priorat) and Pião (Piedmont/Dão).  However, returning to its roots,  the company originally known as Dão Sul is, according to Rui Correia (Head of Marketing & Sales), “very focused now on Dão wines…with other regions [Alentejo, Bairrada, Vinho Verde, Douro, Lisboa, Brazil] there only to complete the portfolio.”

Last year, the “Dão first” strategy saw Global Wines acquire Quinta do Cerrado, where Chief Winemaker Osvaldo Amado has previously made wines.  In 2016, it was rewarded when a red from the company’s most classical Dão estate/brand – Casa de Santar – was honoured with ‘Nobre’ or noble status.  With Boas Quintas Nobre Branco 2015, Casa de Santar Nobre 2013 is one of only two Dão wines in over 25 years to be certified thus.

Still, as I discovered over lunch, the innovative streak (which I’d largely attribute to former Chief Winemaker/co-founder Carlos Lucas’ derring-do) has not entirely disappeared.  Playful where Casa de Santar Nobre is deadly serious, Amado’s versatility shines through in a cheeky White Touriga.  Who knew!

Below, you’ll find my notes on highlights from the November tasting, which started over lunch (at Paco Dos Cunhas de Santar’s consistently excellent, contemporary restaurant).  By way of background, the company currently owns or manages some 300ha.  Correia summarised changes with the core brands as follows: Quinta de Cabriz has become more mainstream/approachable (with a corresponding price reduction) and now includes Global Wines’ organic grapes, Casa de Santar retains its classical profile (“but this doesn’t mean it’s old fashioned,” he added),  Paço Dos Cunhas de Santar/Vinha do Contador is top of the range only (hence the organic wine getting the Cabriz moniker), while the plan is to distribute Quinta do Cerrado via the multiples (supermarkets).

Good to have all your ducks in a row when, according to Correia, wine consumption (currently averaging 45l/capita) rocketed in the wake of the financial crisis and continues to grow.  A phenomenon which surprised the Head of Marketing & Sales, but which he attributes to the country’s burgeoning tourism.  Portugal’s annual deluge of 12 million tourists exceeds the country’s population (10 million)!

While we’re at it, here’s another surprising fact I recently discovered about Portugal from this The University of Adelaide publication about Wine Markets 1860-2016.  Grapes represent 35% of Portugal’s total crop production value, putting it at the top of the global leader board for relative importance of grape growing to the country’s agricultural production. 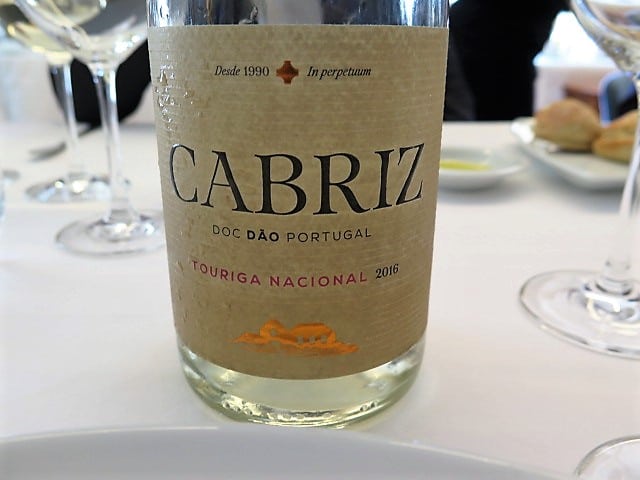 It’s disconcerting to see a bottle of Touriga Nacional with white contents.  And I must admit, I inwardly groaned at the prospect of a white Touriga.  Sounds gimmicky, talk about jumping on the band-wagon, I thought….  An impression which was only reinforced when, said Amado, he made it in response to the marketing department’s challenge to make Portugal’s first white Touriga.  But I have to say it’s good and, to be fair to Amado, this first release is the result of five years of experiments to overcome challenges like Touriga’s concentration of colour and extracting (fruit) flavour, but not tannins.  Still, I was struck by how this wine hung on to its (new adjective alert) Touriga-ness!  Take its mandarin notes (think Bergamot in reds), body and subtle texture.  Body, freshness, texture and balance make this white Touriga an appealing option for those already sold on red Touriga’s friendly profile.   Clever.  So how did Amado do it?  The grapes were picked before Encruzado (the white grape which is usually the first to be harvested), a fortnight before Touriga Nacional for rosés and a full month before Touriga Nacional for red production.  Whole bunch grapes went into a pneumatic press and only free run juice was vinified for this wine. Just 3000 fast-selling bottles were made in 2016; 7,000 bottles will be produced in 2017.  12.5%

This blend of 40% Alfrocheiro; 40% Aragonez; 20% Touriga Nacional certainly ticks the approachability boxes with its juicy, bright but smooth (a touch yoghurty) blackberry and red and black cherry fruit.  Medium length with a gentle rub of tannins on the finish.  A very good mainstream expression of the region (as was the more fragrant 2014 tasted over lunch), it was aged for six months in French oak.   I also tasted the Reserva (2013) which shows more fruit power, oak and polished tannins.  13%

This unoaked 50:50 blend of Touriga Nacional/Aragonez is certified organic.  It had two months’ skin contact and 6 months of batonnage on fine Touriga lees.  Overall, it spent 18 months in stainless steel and was aged for a further three months in bottle prior to release.  It reveals deeper set, more intense fruit (black and red berry) than the Colheita, additionally, a mineral, graphite edge to the fruit.  Juicy, fresh and lingering with the Dão’s signature rub of fine tannins to the finish.  Going forward, this wine will focus on Aragones. 13.5% 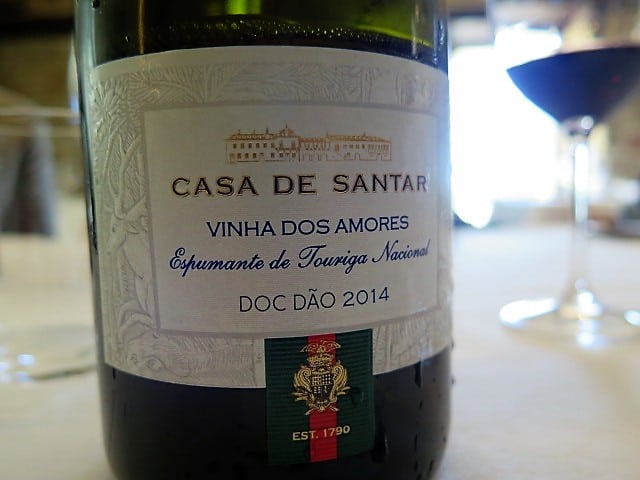 All the Casa de Santar wines are single estate.  The beautiful old manor house presides over the region’s largest (120ha) privately owned vineyards, which Global Wines acquired some years ago.  Vinha dos Amores is a parcel located on the slope at the end of the vineyard, which used to have a  lovers’ fountain. Amado is a fan of Touriga Nacional (“even better than Encruzado”) for sparkling “because of the structure of the grape,”  valuing it for its acidity and secondary and tertiary aromatics. This is a classy example, with a fine, very persistent bead and a touch of creaminess, which lends a certain body/weight without detracting from its clean, elegant lines. 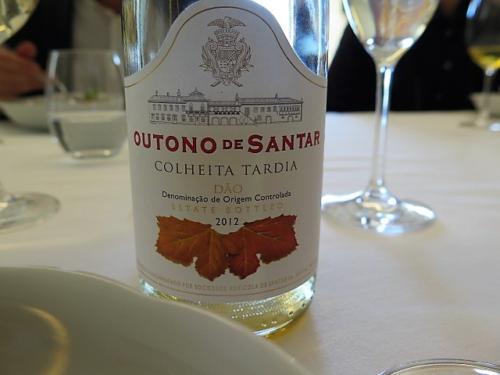 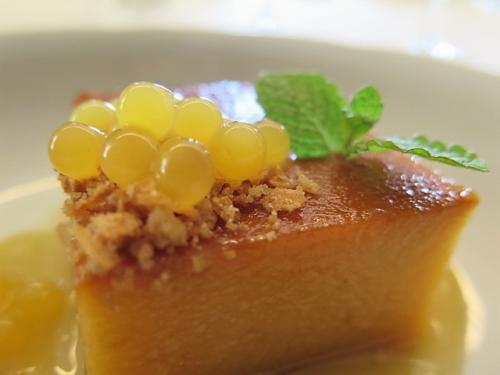 You don’t encounter many late harvest or botrytised sweet wines in Portugal.  I guess fortifieds have the dessert course pretty much covered.  This wine is not made every year and, though labelled late harvest, also incorporates some botrytis.  Mostly made from Encruzado, it betrays this leading Dão grape’s presence with a hint of resin/pine and lovely freshness/balance.  Floral, with delicate honey, hints of mandarin and the tarter, less tropical flesh which surrounds passionfruit seeds.  Delicious with the two textures of apple dessert pictured.  It has 60g/l residual sugar, 7g/l TA, 12.5%

This unoaked blend of 40% Encruzado, 30% Cerceal Branco, 30% Bical was aged on lees.  Its a well made entry level white with the estate’s structure and balance in evidence.  Fresh, with nice balance and push to the palate. 12.5%

Fifty percent of this blend of 50% Encruzado, 30% Bical, 20% Cerceal Branco is fermented and aged in new French oak barriques (low toast).  Nice complexity and polish, with lemon and lime, creamier white asparagus and a saline undertow of fresh acidity, which pushes out a long finish.  French oak, French polish.  Would appeal to the Burgundy lover.  Incidentally, the estate’s top tier white, Condessa, has been replaced by a new 100% Encruzado – Vinha dos Amores – which sees less batonnage and is, I’m told, proving popular.   I tasted the 2014, which is certainly firmer/crisper of profile, but I found the oak a little over-assertive and a strident, pungent (Fairy Liquid?) note, which I’ve found in a few other top cuvees.  I’d like to review it with bottle age.  13%

This is the company’s most ambitious white – an Encruzado-led (60%) blend with Malvasia Fina and Cerceal.  Like the Santar Reserva, fifty percent of the blend was fermented and aged for one year in new French oak barriques (low toast).  However, it is a fuller-bodied, more textural wine, if still subtle and restrained.  It has a lovely balance to its white peach and white asparagus palate, layered with savoury lees and an aromatic orange peel and attractive vegetal (very Dão) notes.  For Amado, the striking difference for this organically cultivated estate is that the south-west-facing site is much warmer than Casa de Santar (which is north-facing).  There are differences in soil type too.  Vinhas do Amores has more schist, while Paco dos Cunhas is just granite and sand.  13.5%

The blend was quite different in this vintage, with Encruzado, Bical, Verdelho and Malvasia Fina. It also spent longer in oak.  With bottle age, this is yellow gold and has an oiliness to the palate.  It’s a substantial wine, with no little girth – big and chewy, but with a salty minerality, vegetal salt bush notes too which add balance (a certain coolness) and complexity.  Powerful as it is, the fruit is still motoring and this wine retains good freshness and length.  Impressive. 13.5%

This well structured blend of 50% Touriga Nacional, 25% Alfrocheiro & 25% Tinta Roriz saw extended post-fermentation skin contact, 9 months in new French oak and 2 months in bottle.  As I’ve come to expect of (and very much like about) Casa de Santar, it is an elegant, mineral wine, classical, almost austere.  It currently shows restrained, introspective yet intense, dark berry/currant fruit, fine, sooty tannins (incipient iodine), delicate spice (oak and fruit) and a very long, firm, tapered finish.  It put me in mind of great Cabernet Franc, with its minerality and firmness (less fruity/drier than Cabernet Sauvignon). It’s still quite youthful, so I think the best is yet to come.  On which note, it was interesting to taste an 83 and a 2003, both of which had a pronounced iodine character and firmness.  The attenuated 2003 was not a great bottle, but the 83 retained a sweetness and flesh which was sustained on the palate. 14%,

Vinha dos Amores Touriga Nacional was launched in this terrific vintage.  It is and, said Amado, always will be, 100% Touriga Nacional (the grape represents about a 30% of Global Wines’ premium range).  It is a fine example of the Dão’s strength at single varietal Touriga Nacional (elsewhere, this generous grape can be a tad de trop).  The 2011 spent 12 months in French oak barrels and 3 months in bottle.  It has a floral nose, with an edginess which speaks of freshness.  A freshness which the palate confirms.  This is what I call a long throw wine – with javelin-like precision and cut through.  Terrific elegance, length and line with lovely minerality – Santar’s dryness – melding beautifully on the palate.  14%

Nobre, the first (and thus far only) Dão red to be distinguished with noble status, is a blend of four grape varieties from four parcels – 50% Touriga Nacional (Vinha dos Amores), 20% Alfrocheiro (Vinha do Casal Sancho), 20% Aragonez (Vinha do Rachadouro) and 10% Jaen (Vinha das Alminhas).  It is an immensely accomplished wine, thoroughly deserving of its special status which, I might add, was no mean feat in 2013.  I recall visiting during a rather glum, wet harvest.  Amado recalled they had to stop picking mid-harvest, resuming picking after a week. Trust me, there is no shortage of intensity or concentration to this youthful, tremendously poised wine, which was aged in French oak (75% new and lightly toasted) for 18 months.  The fruit is currently firm and restrained – again, on the cusp of austerity.  Yet it  has the sweet scented perfume, fluidity and freshness which, together with deep, embedded spices, both impresses and enchants, promising much already.  Dynamic, fine but plentiful spicy (think crushed coriander seed), mineral tannins come up to meet and extend the palate, pushing out a long, long finish, with terrific gravitas and minerality.  Nobre holds much appeal for lovers of fine Bordeaux.  Well worth seeking out.   14.5%