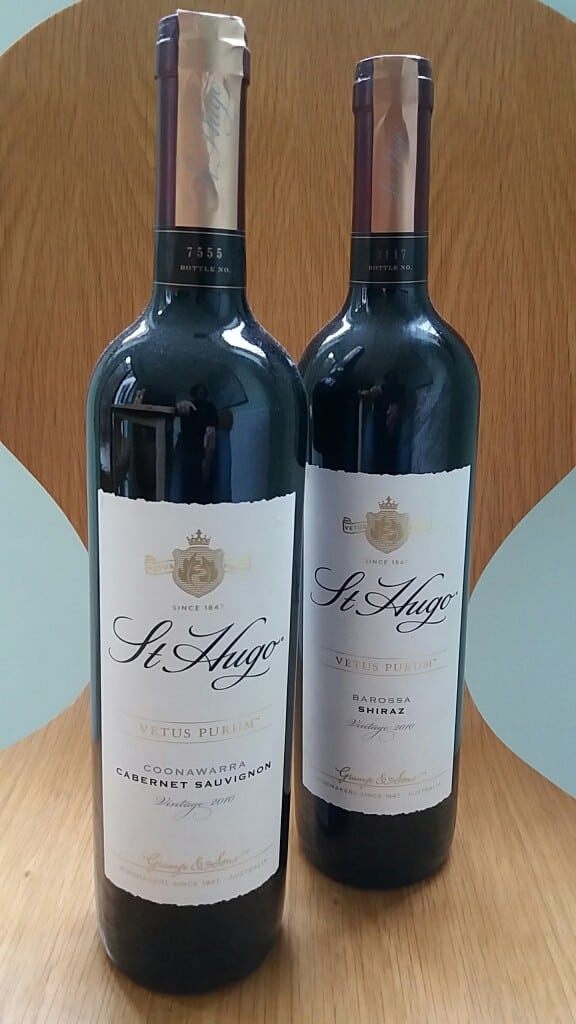 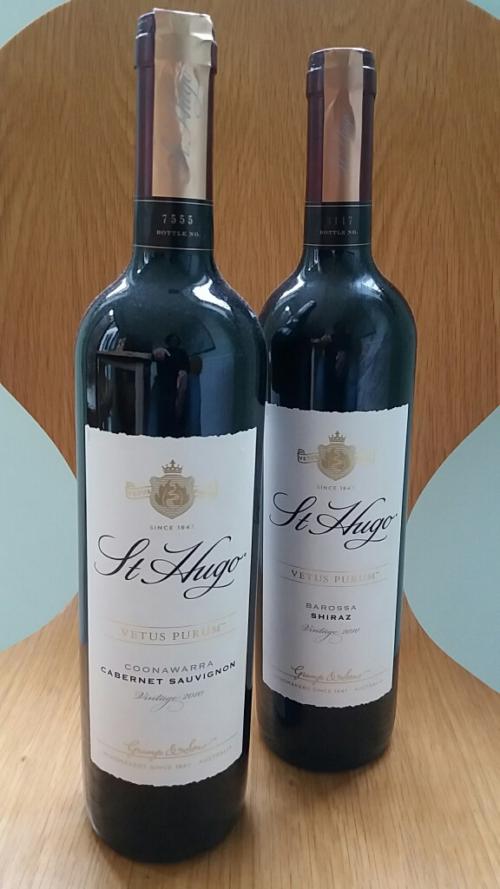 Double barrel no longer extends just to the name Jacob’s Creek, but also to the winemaking process for a recently introduced Shiraz from this popular Australian brand.  A Shiraz which is first matured in traditional oak barrels, then aged Scotch whisky barrels.  Meanwhile, super-premium sister brand St Hugo has a new double barrel label in the range – Vetus Purum.  Made in very limited quantities, the flagship in the range borrows from founding family Gramp & Sons’ crest (Vetus Purum is Latin for ancient and pure).

I recently tasted the first of the Double Barrel Matured Shirazes to be sold here and the inaugural Vetus Purum Cabernet Sauvignon and Shiraz, which were launched in 2014.  You’ll find my notes below.  First a word on the use of whisky barrels for ageing wine. I’ve encountered this practice before in Portugal.  In both cases, for rather more powerful fortified wines.  Filipa Tomaz da Costa of Bacalhôa Vinhos uses seasoned 200l malt whisky barrels to mature Moscatel de Setubal.  Why?  Because the small format accelerates the torrefaction process , plus whisky does a brilliant job of keeping barrels clean!  Leading Madeira producer Henriques & Henriques has been experimenting with Bourbon barrels because, says CEO Humberto Jardim, “you feel immediately the US oak influenced by bourbon – a burnish and caramelised character.”

Jacob’s Creek’s press release expands on why the Australian winemaker is using whisky barrels to finish wines. Chief Winemaker Ben Bryant explains, “[W]e discovered that finishing the wines in aged whisky barrels introduced additional intricacy and a smoother texture, due to the fundamental differences between barrels made for ageing whisky, and those crafted to age wine.”

Whisky barrels, he adds, “are scorched at a high heat, which releases their natural wood sugars, while their narrower staves allow for greater oxygen exchange. Over a long period of time, this imparts colour, flavour and sweetness to whisky. For Double Barrel, Jacob’s Creek used well-aged whisky barrels, so their influence is subtle – adding intriguing nuances without changing the essential character of the original wine.”

Incidentally, this article by James Halliday points to the much earlier use of whisky barrels to mature wine in Australia.

A round but distinctly smoky, charry, spicy nose and palate with a eucalypt edge to its black currant/berry and juicy red cherry fruit.  It is, as Bryant says, smooth in terms of tannin structure which, for my partner meant, “as a first sip wine, it’s incredibly appealing, but thinking about it is there enough tannin?”   For me, the lack of grip combined with an accelerant-like kick of alcohol to the finish seems out of kilter for a medium-bodied wine like this.  It runs away with you a bit!  It’s not for me, but you might say it delivers a warming style of Shiraz which, in tandem with the charriness, curries favour with Whisky lovers.  The macho black label certainly plays up to its butchness. Over to you!  14.9%.  £12 at Sainsbury’s 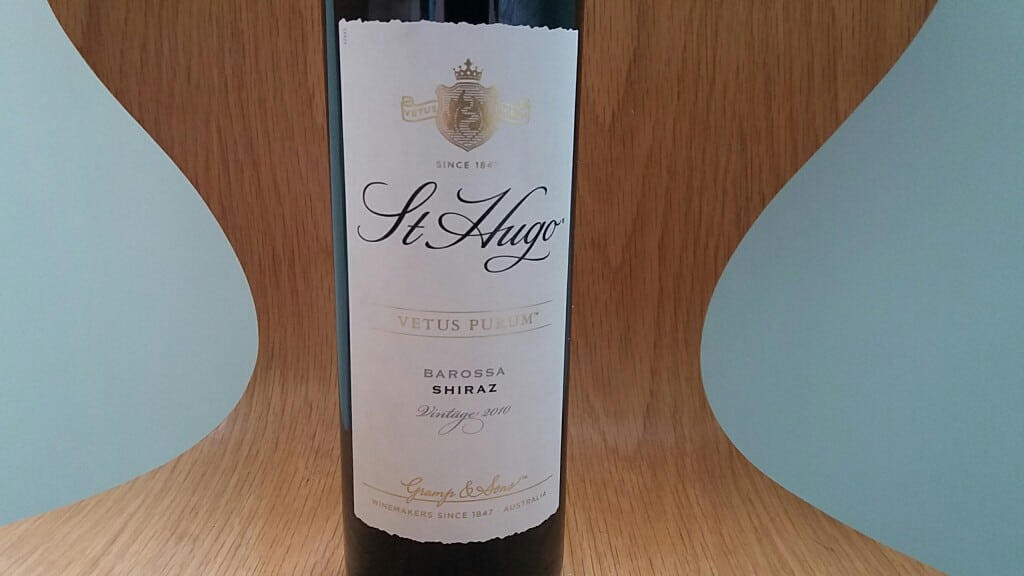 Fruit was sourced from the Koch Willandra vineyard in Rowland Flat, next door to Jacob’s Creek.  It was first planted in 1919; the soils are predominantly sandy over red clay loam. After 24 months in new (41% French and 52% American) oak and 7% seasoned American oak, the best barrels made the cut for this flagship wine.  As you would expect, this concentrated wine – built for the long haul – benefits from time/air.  On day one, it is rich and ripe with classic Barossa malty oak, fleshy plum, Blackforest gateaux (black cherry, chocolate and kirsch notes) and a plush, velvety quality.  Even a touch of engine oil/tar.  But there’s a (very 2010) juiciness to the core, which leavens and makes for good persistence.  As it opens up, eucalypt, dried herb, red berry and liquorice notes emerge and, by day two, the engine oil note has dissipated.  In its stead, I find black olives (which sometimes have a fusel note for me).  Persistent acidity and a cloak of fine-grained milk and bitter chocolate tannins extend and embed the flavours over a long finish with a mineral undertow of iron filings/hard pan earth.  Impressive.  I would leave it for at least another five years before broaching.  14.9% RRP: AUD $188 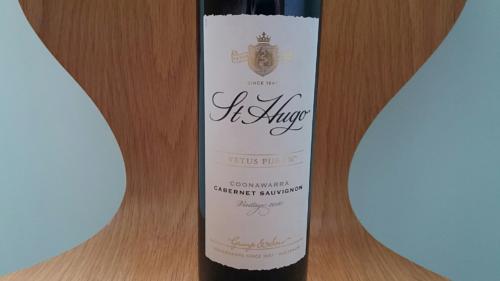 Fruit was sourced primarily from the Flint Vineyard in northern Coonawarra.  Apparently Chief Winemaker Dan Swincer worked closely with the Flint family for over a decade to nurture select rows of their very best vines. According to the technical fiche, the vineyard’s free-draining red-grey soils produce small but intensely flavoured berries at low yields of around five tonnes per acre. It is certainly reflected in the deep hue and opacity of this Cabernet.  What intrigues me most of all is its freshness and relatively low alcohol.  Qualities which give this concentrated wine’s classic nose and palate of tight-knit cassis, fresh blackcurrant and black olive both fluidity and focus.  There is a palpable sense of restraint – that it has yet to flesh out.  On day two, it reveals more red fruits-  raspberry, cherry and plum.  But while you experience the brightness and vivacity of the fruit, the body is caught up – corseted, if you like – by a mesh of fine tannins.  Cedar, cocoa and a touch of mint chime in on a classy, very polished, noticeably dry (as in flavour, not astringency) palate.  You might even say it is a tad austere. To my mind that is all to the good.  The best is yet to come.  This wine has a long life ahead of it.  Like the Shiraz, Vetus Purum Cabernet is a best barrel selection and was aged for two years in barrel.  As is traditional for St Hugo, a mix of French and American oak as well as new and old barrels was used, comprising 63% new and 21% old French oak, and 16% new American (16%).  13.2% RRP: AUD $188