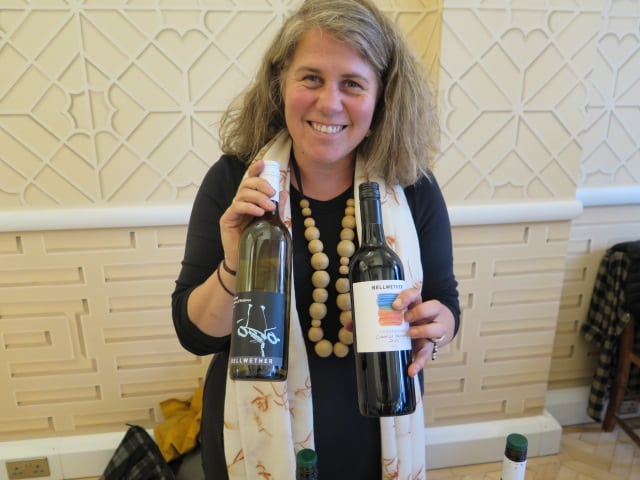 Last month Bellwether’s Sue Bell was in town to show her wines at her UK importer, Red Squirrel’s portfolio tasting.   I knew that a bellwether indicated a trend, but I didn’t know that it was derived from a term for the leading sheep of a flock (which had a bell on its neck).  So the name is triply relevant for Bell, whose winery is based at Glen Roy, a converted 19th century shearing shed in Coonawarra.  I look forward to visiting when I’m in the region later this month, judging at The Limestone Coast Show.

While Bell’s Coonawarra output is totally classic, that is to say, Cabernet Sauvignon-focused, she has cast the net wider for her Ant Series’ range.  Describing it as our ‘climate change’ range (because the movement of ants is an indicator of a change in the weather), Bell introduced a Riverland white in 2016 – Bellwether Ant Series Bianco d’Alessano.

Bell and fellow artisans, including Laura & Brendan Carter of Unico Zelo, Adelaide Hills, Sam Scott at Scott & La Prova, Adelaide Hills and Con-Greg Grigoriou of Delinquente Wine Co. the Riverland have also made wine from the Puglian grape. So what do they see in it?  High natural acidity is a key factor.  But Bell, who admitted, “I never thought I’d go to the Riverland for fruit,” let alone fruit for a white wine, was floored by the thick-skinned Bianco d’Alessano’s tannins and phenolics.  Both qualities which attract the winemaker to Cabernet Sauvignon.

It was my turn to be floored when she explained that this Puglian white variety ripens later than Cabernet in Coonawarra and Chardonnay in Tasmania (where she also makes wine).  After all, these famously cool climate regions have long ripening seasons and Cabernet is a late cycle grape variety, whilst the Riverland is famously dry and hot!  It’s why Bell ferments the Bianco d’Alessano on skins – to soften its tannins and build texture, just like a red wine.  “It’s not about being a hipster,” she joked.

Commenting on the skin contact trend, Bell reckons that “the most exciting thing in Australia now is phenolics.”  Ironically, when she attended an Australian Wine Research Institute seminar on phenolics 10 years ago (“mind-blowing, because it was looking for texture”), she recalls hardly anyone was there.  Bell is not the first Australian winemaker to tell me that she was taught clinical winemaking when she studied oenology – “cleaning up the juice, pressing, racking off, fining, added yeasts and nutrients” was the mantra and it has taken a while to look past it.  These days, it is better understood that, if you don’t rack must and ferment at higher temperatures, you can use natural yeasts and need neither nutrients nor to fine.

I had two bites at the cherry tasting Bellwether Ant Series Bianco d’Alessano 2016.  First over a Keralan vegetarian curry from my local (lucky me) Rasa N16, then at Red Squirrel’s portfolio tasting.  Though Rasa’s spicing tends towards the aromatic (unless you eat a chili), a curry might fairly be regarded as a challenging match, but the Bianco d’Alessano held its own and refreshed.

Below you’ll find my note from the tasting, together with notes on Bell’s other wines.  You can also find recent notes on other vintages of the Vermentino and Tempranillo here. 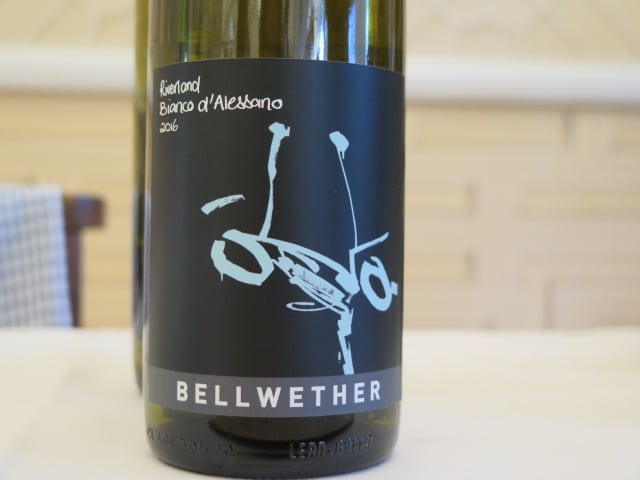 Bell plans to label the next vintage Loxton, to more specifically locate it within the Riverland.  Indeed, the one spot where it is currently grown in Australia.  It is a well-focused wine, with tight lemony/lemon pith, greengage/greengage kernel, persistent, juicy mirabelle plum fruit and a gently nubbly, granular sandstone-like texture.  An interesting, distinctively different white wine from Australia with backbone.  The only downside is the price, which I guess reflects the scarcity of such alternative varieties/wines down under (over here sees much more competition from European examples) and, of course, the artisanal, hands on winemaking.  12%   £26 at Red Squirrel.

A funky, bosky, briny nose and palate with a nutty edge.  The finish is salty and fresh, confirming that the nuttiness is varietal (and not a sign of development).  I’ve tasted a few vintages now from Bell.  She’s a dab hand with this variety. 12.8%  £26 at Red Squirrel

The Chardonnay comes from a vineyard in Relbia, in the southern Tamar Valley which was planted in the 1980s – old for modern Tasmanian plantings.  It’s a “precocious warm site in a cold spot,” says Bell, who picks earlier than her neighbour, Jeremy Dineen at Josef Chromy.  It has smoky ogen/rock melon fruit, zesty grapefruit and lemon oil wed to a tight acid backbone. Well made and, I’d say, just starting to open up and build in the mouth.  Interesting to see where it goes.  12% £40 at Red Squirrel

I was enraptured by the 2015 vintage which I tasted earlier this year at Wine Australia’s Alternative Variety Tasting (my report here).  The 2016 excites me for the very same reasons.  Its perfume, freshness and purity of black cherry fruit.  Svelte, but bright.  Polished but charming, with its sheen of fine tannins.  Just lovely.  £26 at Red Squirrel

I first met Bell when I visited the Limestone Coast in 2013.  And I was utterly beguiled by her perfumed Cabernets.  I enjoyed a bottle of the 2010 with aubergine parmigiana at the beginning of the year (my note here).  It still has so much to give but showed a hint of linseed, tufa (earth/fresh porcini) in addition to savoury black olive on this occasion – notes which I heavily associate with Coonawarra.  The nose is spicy, with perfumed oak and balsamic notes to its intense but never dense blackcurrant/cassis fruit. Rather it motors along, purring through a long but plush finish, seamlessly supported by fine grained tannins and persistent but ripe, acidity.  Thoroughly pleasurable.  13.5%  £40 at Red Squirrel