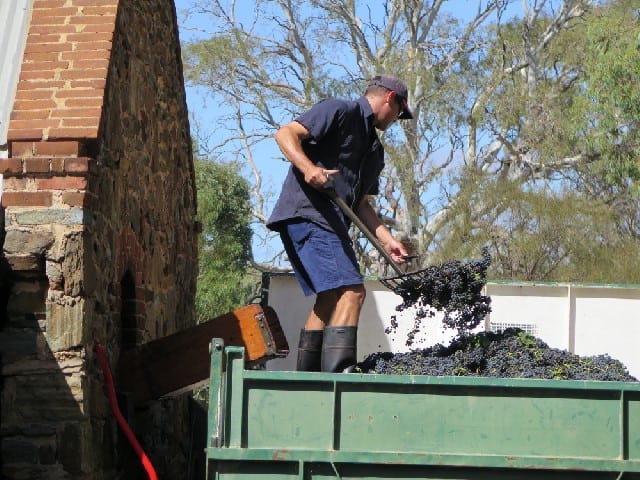 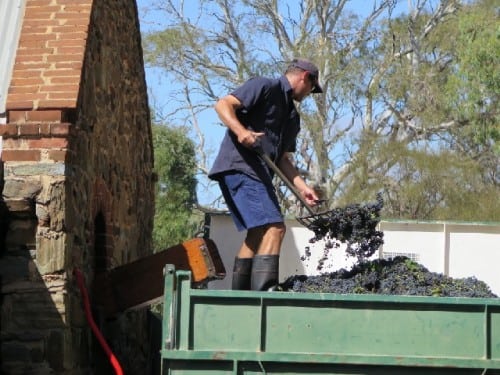 Days two and three of the Arblaster & Clarke tour I’m leading took us to the Barossa. It was blue chip Barossa all the way and we were thrilled so many winemakers could take time out of vintage to join us.  Here are some highlights from a vintage which everyone is very excited about.  For Charlie Melton, it’s the earliest he has harvested and the vintage looks “really superb” given the dryness in the lead up to vintage. 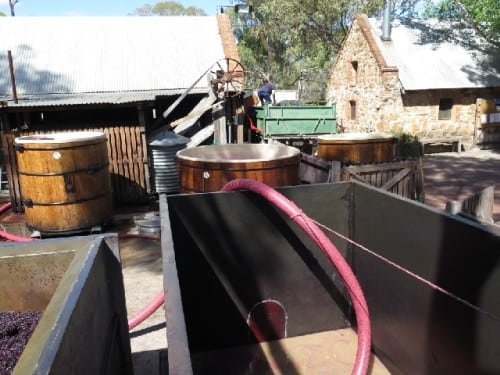 Rockford’s winery is as acclaimed as its wines.  With its aged crusher, mintaro slate open fermentation vats and wooden basket presses, General Manager David Kalleske summed it up when he said, “it looks like we’ve set up a museum but it’s how we make our wine.” 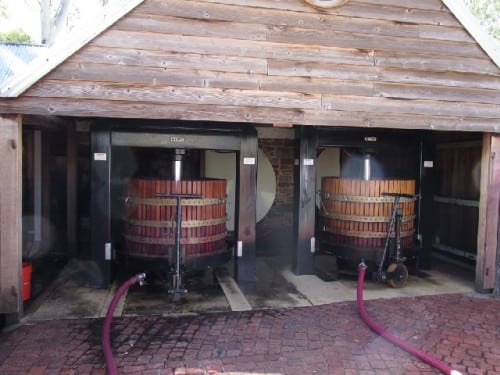 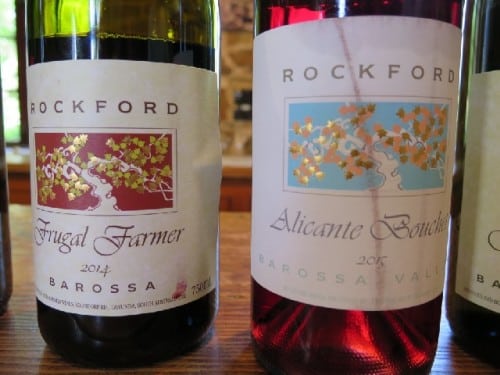 Alicante Bouschet usually means Alentejo, Portugal, for me.  Rockford’s Alicante Bouschet rosé has been a roaring success, but it was The Frugal Farmer which caught my eye.  This Grenache and Mataro fermented over Alicante Bouschet skins makes a thoroughly charming light red with floral notes and a brush of spicy tannins. 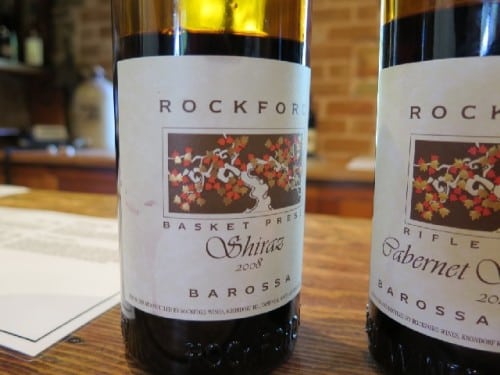 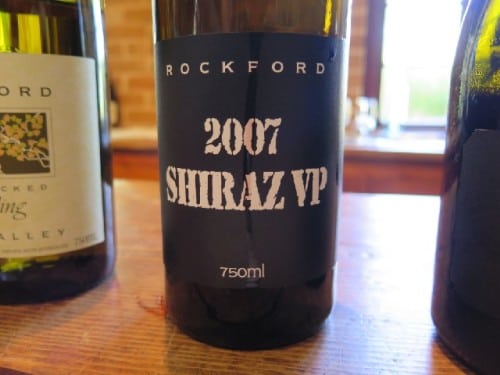 With super moreish Marion Tawny, Rockford VP Shiraz is another nod to Portugal. This fortified Shiraz from the 2007 vintage is as slippery smooth as they come, with inky, very intense black fruit and an utterly brilliant integration of wood-aged brandy spirit. 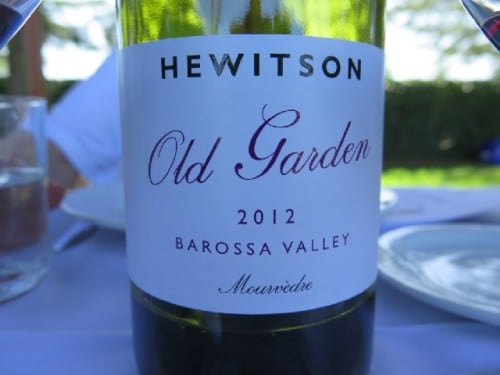 I knew in advance that my favourite wine from the Hewitson tasting would be Hewitson Old Garden 2012 (it was a stand out wine at the Old Vine tasting I chaired in November, my review here).  Sourced from the world’s oldest known planting of Mourvedre (1853) it duly enchanted everyone on our tour and, with its garrigue notes, went down super well with Barossa BBQ’ed lamb with rosemary. 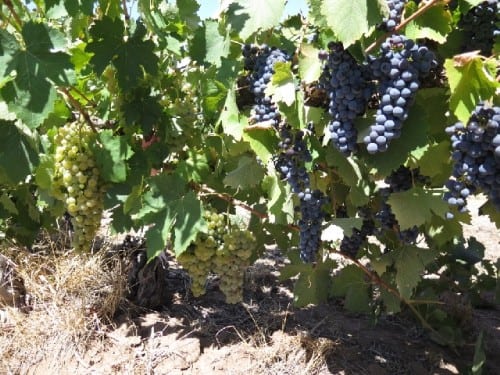 But my biggest thrill was to visit the vineyard.  Wow, did it shoot down in flames the myth about old vines being low yielding.  In rude health, the vines were loaded with bunches of Mourvedre and these big, fat, juicy mid-row bunches of white grape Doradillo – mixed plantings par for the course in vineyards of this age.

John Duval, Artisans of the Barossa

It must be a great relief to a family-owned business when the next generation throw their lot in.  John Duval’s son Tim, a former commercial lawyer, has recently joined the business – annoyingly I forgot my camera so have no pics of the father-and-son team.

John Duval 2012 Plexus SGM & Eligo Shiraz and 2013 Entity Shiraz showed their customary polish and poise while John Duval Plexus MRV 2014 was not the first Barossan white to surprise the tour with its freshness and low alcohol (12.5%) – it’s a very floral, delicate interpretation of Rhone varieties Marsanne, Roussanne and Viognier.

Just 250 cases were made of John Duval Annexus Grenache, sourced from two vineyards, a centenarian vineyard just south of Tanunda and an 1858 vineyard in Eden Valley.  It’s a plush Grenache with lifted rose petal/turkish delight notes to its sumptuous chocolate cherry truffle layers, persistent acidity and sandy tannins to the long finish.

Should you be visiting the Barossa, we were all mighty impressed with the Artisans of the Barossa’s cellar door “Feed you like a Barossan” sharing platters.  Prepared by Harvest Kitchen, who started running the restaurant 10 months ago, deft Ottolenghi style use of spices in worked brilliantly well with the wines.   I particularly enjoyed the beetroot skordalia with crumbled feta and flat bread (fabulous with Entity GSM 2005 from magnum), spice fried eggplant chips with aioli and ancient grain salad with vache curd and pomegranate dressing – so a great find for vegetarians. 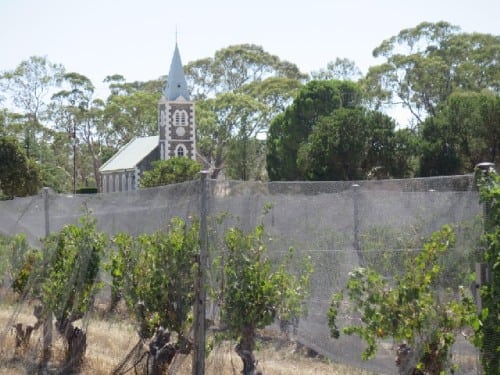 Venturing up to the palpably cooler climes of the Eden Valley we were taken to its most famous vineyard – the Hill of Grace (at 400m), its precious Shiraz (the oldest planted in the 1860s) protected by bird nets.   Lucky us, we were also shown the latest 2010 release in all its glory (though I still reckon I’m a Henschke Mount Edelstone gal, the 2012 just beautiful).  Julius 2015 Riesling and Cyril Cabernet Sauvignon 2010 also impressed, the latter super-fine and perfumed, the former perfumed, fine and delicate with floral and mineral notes. 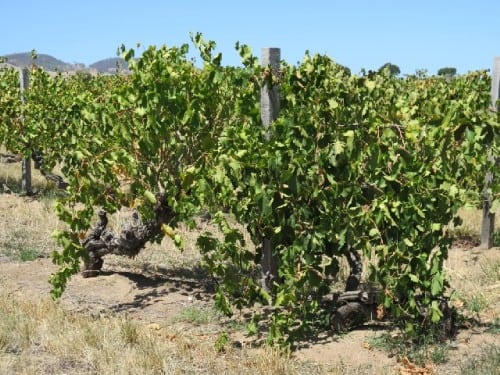 It’s not difficult to find old vines in the Barossa and our next visit took us to Turkey Flat, whose aged Shiraz dates back to 1847.  The 2012 vintage which features fruit from these vines and cuttings sourced from these vines also featured in the Old Vine Masterclass which I presented in November and was another standout (my review here).  Very much in this producer’s elegant, subtle style.  And speaking of “cuttings,” Christie Schulz is plainly delighted that her son Alex has joined the business. 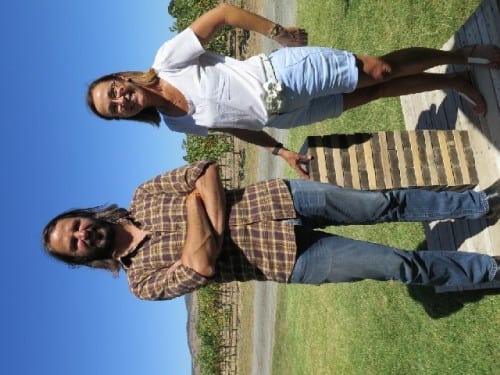 Alex has a hospitality background and is keen to speak to his generation of drinkers with brighter, more modern wines.  This has involved the introduction of sealed whole bunch fermenters to introduce a carbonic maceration blending component for lift on nose and palate.  From 2014, the Shiraz incorporates some fruit which has undergone this process.

He is also brewing aromatised aperitif Quinquina.  Bursting with exotic citrus notes let me tell you just a snifter on a hot day proved incredibly refreshing. 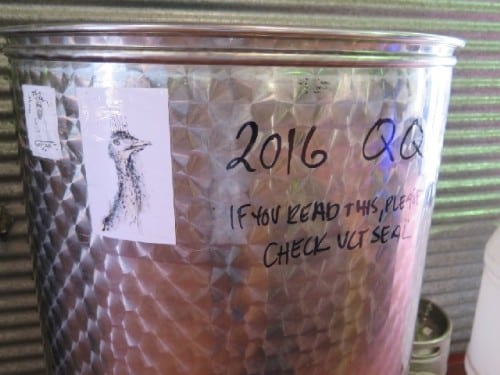 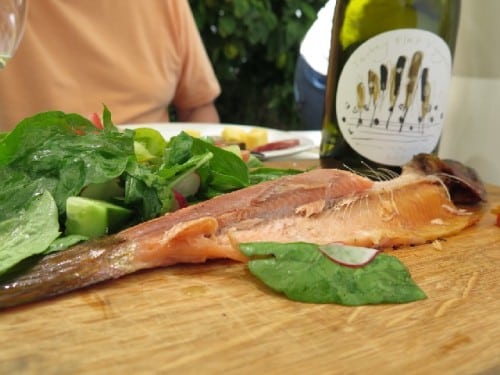 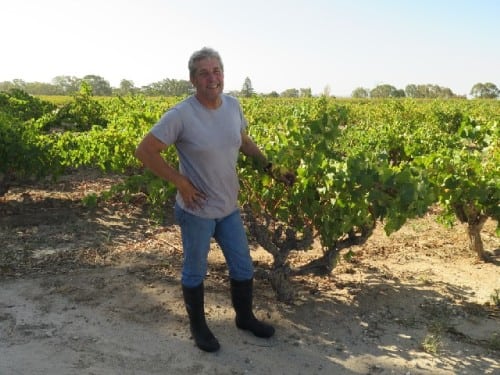 Charlie Melton with Grenache vines, sporting vintage stubble, purple hands and wellies – he has crushed 80% of vintage so far.

I’ve met Charles Melton many times in London and in Australia, but never on his own turf.  It was great to visit and get a handle on this seasoned (43 vintages to be precise) winemaker’s operation.

Pictured with his signature variety – the aged Winery Block Grenache  – Melton makes no bones about his approach.  Referencing his former boss, the late Peter Lehmann, the style is “warm and cuddly.”  Like Barossans, he added, “warm and generous.”

Of the range we see in england the Voices of Angels Shiraz 2013 sang sweetly in my ear. From a vineyard at 450m and aged in 100% French oak, it reflected the Upper Barossa’s cooler climate brilliantly, with well focused, buffed, bright and shiny black berry fruit and fine grained tannins.  Lovely persistence.  And not coming to the UK, who knew Melton GSM Belle Mere GSRM features “a mystery white” – Riesling!

En route to our next regional stop, Adelaide Hills, we swung by Taste Eden Valley.  It’s a handy cellar door to visit because it serves a number of boutique Eden Valley wineries. 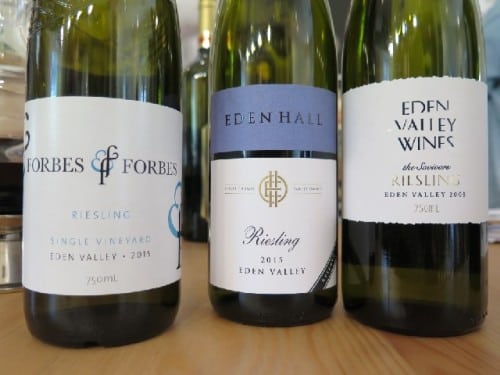 We looked at the current selection of wines on show.  My new discovery was Eden Hall in High Eden – the 2015 Riesling my stand out of the Riesling trio. Intense, long on flavour, perfume and minerals.  Just perfect really.  The 2010 Block 4 Shiraz was pretty good too.  Made by Kym Teusner it was earthier and spicier than his range.  Quite gentle but insistent. 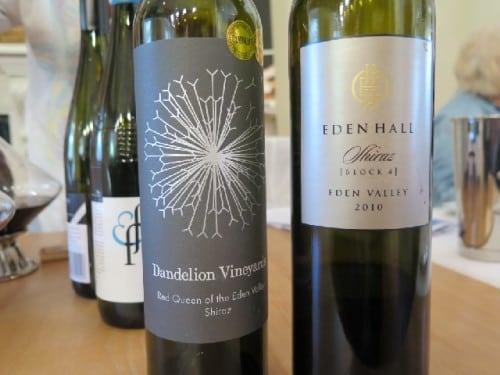 Dandelion Red Queen of the Eden Valley Shiraz 2012 cleverly married sweet red velvety fruit with savoury cracked black pepper – nice line and length.  As for the nutty, very balanced PX which is sourced from centenarian vines and made with very aged XO brandy, it lingered long in hearts, minds and the palate. 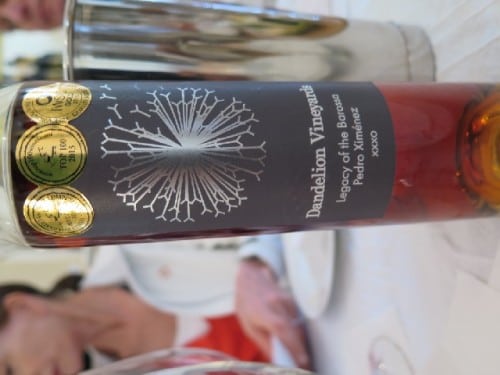 Finally, I should mention I dined, once again, at FermentAsian in Tanunda during our stay.  Once again co-owners chef Tuoi Do and her other half, Grant Dickson came up with the goods.  The group has been loving Semillon, both in Clare and the Barossa – a cue for Dickson to introduce me to Eperosa‘s wild fermented, skin contact barrel fermented Semillon (currently being poured by the glass) and, a bonus, the owner/winemaker Brett Grokey who happened to be there for dinner.  It was an impressively dry, mineral, very limpid wine – very stony, with a subtle nutty edge and persistent, well integrated acidity.  I learned that Grokey’s reds (sadly not the Semillon!) are on the seas to the UK; they are being imported by Indigo Wines.  So I look forward to making their acquaintence too.