If you glance at a map of Australia, its wine regions are broadly clustered to the south.  Furthest south, you’ll find highest profile cool climate regions, including Great Southern (Western Australia), Coonawarra (South Australia), Mornington Peninsula (Victoria) and Tasmania.   With no land mass between the South Pole and Australia, their wines are defined by the tempering effect of the chilly Southern Ocean.  As for cool climate regions away from the ocean, the only way is up, especially for the country’s northernmost regions – take New England in New South Wales right on the Queensland border and, in Queensland itself, the Granite Belt. 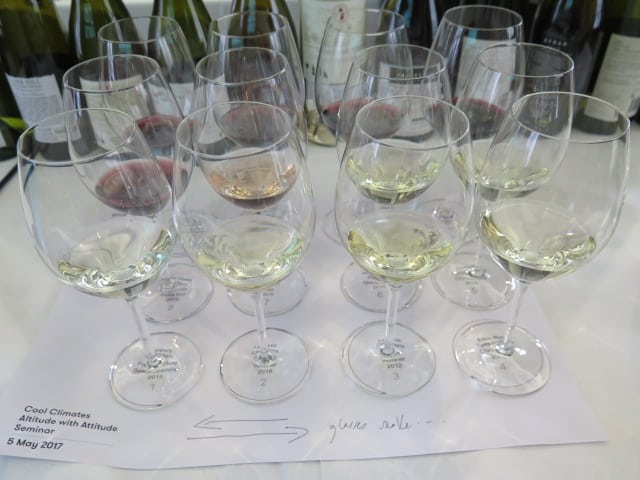 On Friday, I presented a Wine Australia masterclass to highlight cool climate wines influenced by the Great Dividing Range.  This crescent of low mountains and plateaus runs parallel to the Queensland, New South Wales and Victoria coasts for some 2,300 miles.  From between 600-900 metres above sea level, marked diurnal temperature variation (and the long growing season which accompanies it) informed their distinctive (high natural) acid and ripe but present tannin structure.  Fruit tended to be focused, rather than fleshy.  Flavour intensity was achievable at low alcohol.

From north to south, here are my picks of the bunch: 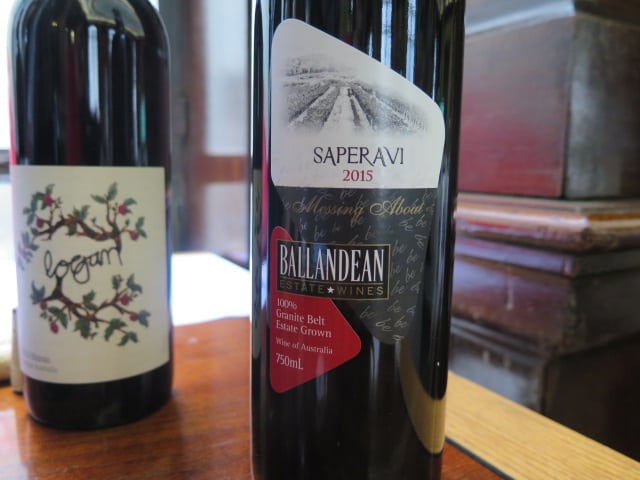 More like no messing.  From Ballandean Estate’s Bellview vineyard at 820m, Dylan Rhymer has nailed this Georgian variety.  I found a balance of fruit, acid and tannin which was sorely missing from many of the entries I tasted at last year’s Australian Alternative Wine Variety Show, where residual sugar marred wines.  This dry, fresh example had varietally correct assertive, but not aggressive tannins, with inky, clove-accented black fruit, good persistence and length.  Great job. 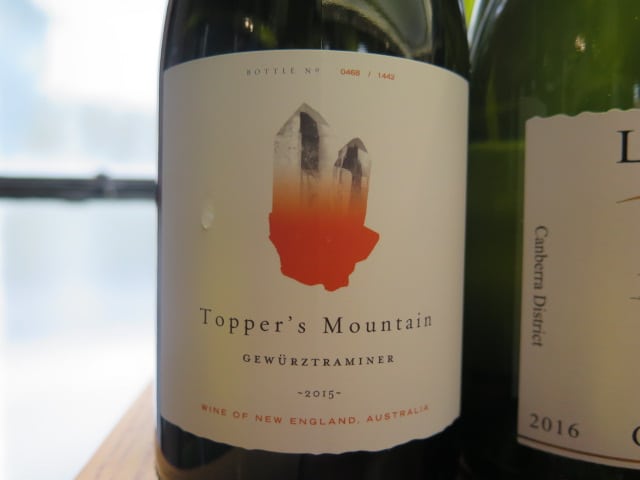 A terrific example of the variety, with all the turkish delight, fresh ginger and lychee notes you expect to nose and palate. Weighing in at 13.9% abv, it is generous in body, yet has a freshness which keeps at bay the oiliness which you sometimes find with the grape.  Lovely purity and persistence.  I can well understand why Toppers Mountain also make a barrel-fermented example. This vineyard at 900m produces the fruit intensity to carry it. 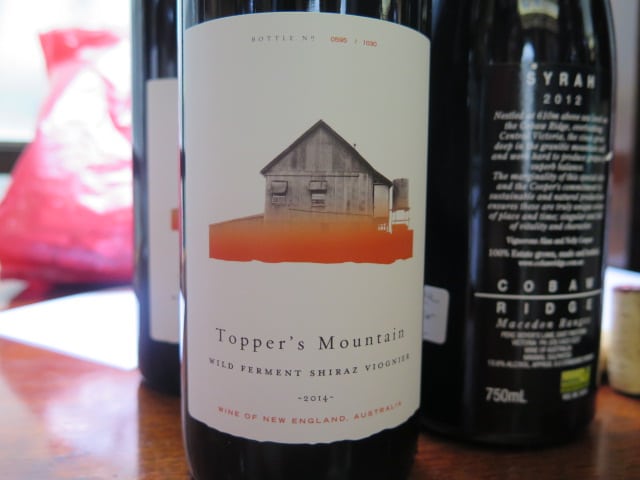 With no sign of pepper, black or white, this is rather different from other cool climate Shiraz /Shiraz Viogniers I’ve tasted.  Menthol notes to nose and palate give a distinct Australian thumbprint, as does its fruit intensity.  But true to its cool climate origins the fruit is succulent, really slinky (as are the tannins), with blood plum, mulberry and blackberry.  Great fluidity. 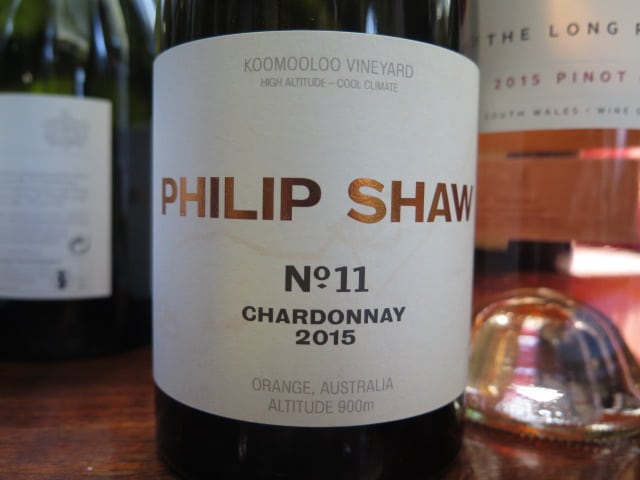 Chardonnay supremo and Burgundy fan Shaw alighted on Koomooloo Vineyard in Orange at 900m because its “near-perfect balance of elevation and sunshine” produces ‘cool sunshine.’ It’s the secret to his fleet of foot, restrained Chardonnays, with their white orchard fruit and al dente acid backbone. 11.5% 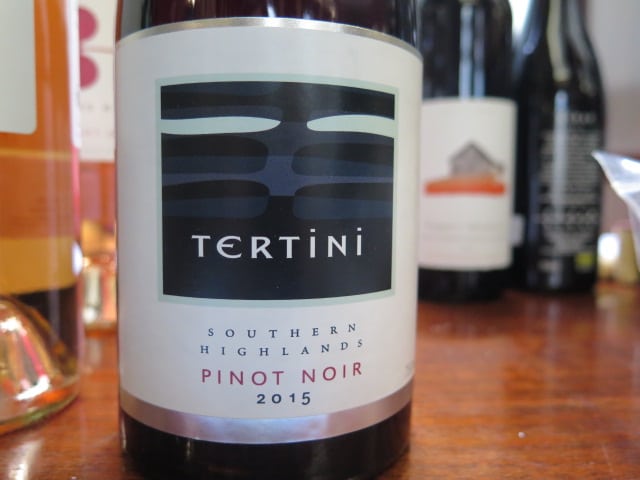 I’d not tasted a wine from the Southern Highlands before and was thrilled to encounter this delicious Pinot Noir from a vineyard at 715m.  A really pretty, red-fruited but firm (acid and tannin) example of the variety with whole bunch earth and spice hints and (very slightly too) pronounced (French oak) charcuterie notes.  I’d never have guessed it weighed in at 13.5%, but I guess the fruit intensity and freshness disguise this.  Tertini are one of two five-star-rated James Halliday wineries in the region and, according to the producer, this has much to do with their precise location within the Southern Highlands.  Look on a map and you’ll see that Southern Highlands is located just 30-70km from the ocean (it was the easternmost of the regions represented).  To the west, where Tertini are located the rainfall is around half that of Robertson on the eastern edge, whose rainfall averages a sub-tropical 1664mm/year! It was good to re-visit Lark Hill’s Gruner Veltliner which I’d last tasted in 2010 in Canberra District.  The Carpenters planted the Austrian variety in 2005 at their biodynamically cultivated Bungendore vineyard (pictured top).  At 880m, it produces the aromatics and intensity you expect of Gruner.  While the 2016 was shy, with citrine notes and a chalky palate, the 2012 had opened up beautifully, showing exotic mandarin notes as well as classic white pepper and brassica notes.  With good body, but holding its acidity well, it was long – very persistent.  Delicious complexity and balance.  A great Australian spin on Gruner. The fruit was de-stemmed, crushed and, after 12 hours’ skin contact, pressed straight to 7-12 year old French oak hogheads (300l).  It was naturally fermented and aged in barrel for 3 months with regular lees stirring.  12.5% Eden Road make three Tumbarumba Chardonnays. Courabyra, from a single vineyard at 740m, won me over to Australian unoaked Chardonnays.  It channels the lightly leesy oyster shell and autolytic notes of Chablis, with hints of lemon and subtle struck match.  Crisp, firm acid propels the palate.  Long, fine; very good. Courabyra was naturally fermented and aged for 15 months in stainless steel on lees, with stirring.  13% 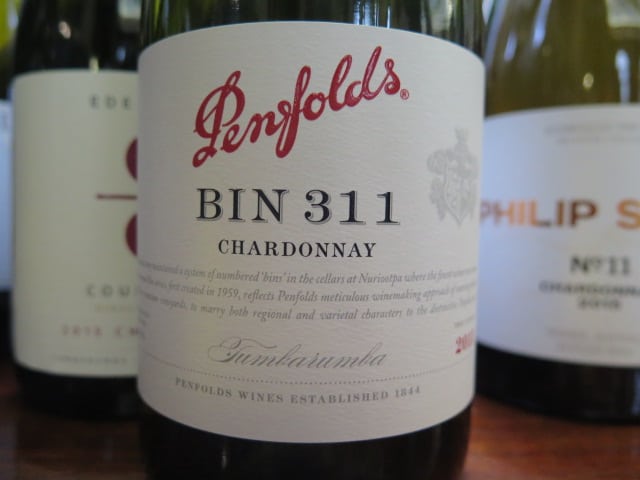 In 2015, Bin 311 was a blend of three vineyards between 650 & 750m.  Aged for 9 months in seasoned French oak barriques, the palate is a little nutty, with the more ‘groomed’ structure and weight which comes from oak.  A little more fruit weight and presence than Courabyra too.  But it shares the Eden Road wine’s cool acid drive and focus; a touch of savoury lees too.  Polished. 13.5% Last but by no means least (this was one of the stars of the show), our southernmost wine came from Macedon Ranges.  Altitude (this wine from 600m) and latitude make it the coolest region on the Australian mainland.  The harvest can stretch into May.  So it is no bad thing Nelly and Alan Cooper cultivate their vineyards biodynamically – it has helped advance the ripening process (Chris Carpenter at Lark Hill says the same).  In contrast to the Toppers Mountain Shiraz Viognier, this wine does chime with examples from the Rhône, with complex black pepper, earth, dried herbs and mineral notes to a savoury palate.  It’s a little rounder and fleshier to the mid-palate than the Toppers Mountain and Logan Shiraz 2012 from Orange (not included – it was a little developed) from more northerly, higher vineyards.  You can read my extended tasting note of Cobaw Ridge Syrah 2012 here (based on tasting it over two days at home), together with a review of Cobaw Ridge’s exciting Il Pinko Syrah Rosé. 13.6%