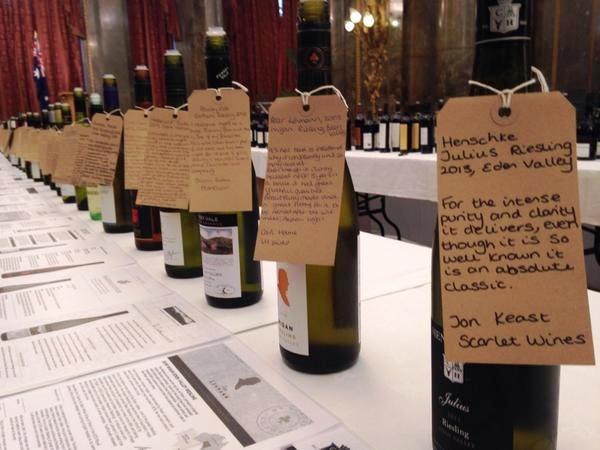 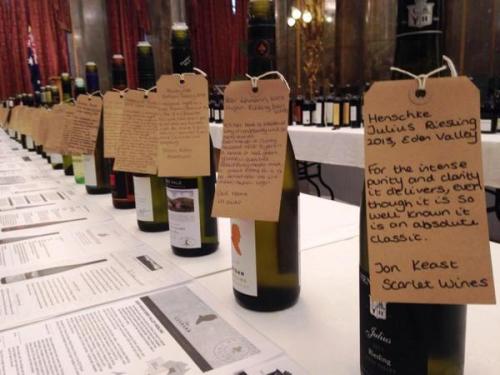 The tasting invites trade and press to nominate wines from their travels Down Under and share what excited them about it (see their comments under “backstory” below).

Just over one hundred wines were shown, some so popular or limited in supply that the bottles were empty by the time I got there!  Take Cullen’s Diana Madeline 2011 and Wynn’s Black Label Cabernet 2008 and 2002 from perhaps my favourite category, the Cabernets, which seem so wonderfully varietal, fine and perfumed these days.

Backstory – nominated by Katie Exton – this is tightly laced, lithe and full of charming red cherry, rose, blood orange and a touch of spice on the finish.  Lively, fresh and so incredibly elegant.  Every time I’ve drunk this wine I find myself thinking about how good it is for days after.

Eleven Pinot Noirs were selected and, I must say, it was the category which disappointed me most.  I found far too many green notes.  Mac Forbes Pinot Noirs may be delicate but there’s not an ounce of greenness.  Just pale intense red fruits well supported and teased out by a backbone of firm but ripe acid.  My notes say great description from Katie!  £49

Backstory – nominated by Jennifer Docherty, Liberty Wines – Sandro Mosele, the winemaker, was telling us that there was a lot of ironstone in the soil here.  I don’t know if that is what made this Pinot stand out in the flight, but it had good depth and concentration with a cake spice character that really piqued my interest.

Backstory – nominated by Matthew Hemming MW, Averys – I think some of the most inspirational wines were those made by Pete Schell at Spinifex.  They weren’t necessarily the best wines of the trip but there’s something very compelling about a dude in shed making fuck-off good wine his own way!  His expression of Barossa terroir – unafraid to blend and achieving cool, snappy, toothsome wines – was also both eye opening and inspiring.  I think it was all about the authenticity of wine/place/man – no BS, no special effects, no pretensions.

Backstory – nominated by Jan Konetzki, Gordon Ramsay – It combines savoury, berry and spicy aromatics with good acidity and a crunchy, grippy mouth feel.  It is full of character and a pleasure to drink in the same time.

Backstory – nominated by Will Costello, Mandarin Oriental – Mac’s use of large fermentation vessels from Austria as well as a moderate amount of new oak really help balance out the slightly herbaceous notes of Cabernet from 2011.  Notably from the critics, this was a year to be avoided, but with the precision of fruit and tannin management, this is a Bordeaux-styled blend which drinks splendidly now but has the power to age gracefully.

An elegant cedary nose with an equally elegant clarity and crunch to its core of blackcurrant fruit.  You guessed it, fine grained tannins carry a long but restrained finish.  Like Mac’s Pinot Noir has intensity with levity.  £49

Backstory – by Yves Fourcade, M&S – Redmond Sweeney and Tony Davis secure every year the best parcels from the acclaimed Wilyabrup region of Margaret River in Western Australia to produce this full bodied red wine with intense plum, cherry and chocolate flavours with a subtle dried herb and floral complexity. Made with Merlot and Cabernet Franc grapes, this supple and silky blend shows lifted fruit with a dense texture but with super fine tannins on the midpalate.

The Cabernet Franc lends great perfume to this blend and delicious bright red cherry fruit.  It is seamlessly blended with the Merlot’s baked cherry and fleshier plum.  The oak brings an attractive milk chocolate edge; the tannins are fine.  Moreish.  £20

Backstory –  the second of my two nominations – women seem to be making the running with Cabernet in Australia and Sue Bell’s Coonawarra Cabernets are a case in point (and great new find from my last trip).  Lovely purity, precision, perfume and finesse.

A finely wrought nose and palate  – like I said lovely purity, precision, perfume and finesse!  Juicy, very persistent red and black currant fruit have a touch of cedar and a savoury hint which puts me in mind of rare roast beef and horseradish sauce!?!? N/A UK.

Backstory – nominated by Pierpaolo Petrassi MW, Waitrose – The Hill-Smith family have exemplified true winemaking heritage and a consistent focus on quality for more generations than the vast majority of European wine producers.  This blend is uniquely Australian and, having tasted vintages from every decade since the 1960s onwards, The Signature possesses a potential longevity which, again, few European producers can match.  The added touch of dedicating each vintage to long-serving members of the Yalumba team, past & present, is inspired.

Petrassi and I both attended Yalumba’s 24th Museum tasting last year and had the great good fortune to taste a vertical of Yalumba The Signature back to the 1960s.   This is an elegant, cedary Shiraz Cabernet, long and layered while retaining a lovely firmness of structure – the backbone for ageing! Loved the taffeta tannins.  £30.00

Backstory – nominated by Daniela Shelton – Gary Mills is a Syrah genius. Nothing added, nothing taken away – just a fine black fruit perfumed Syrah with a supple peppery elegance. This effortless style is best enjoyed while listening to Dark Side Of The Moon (really loud of course!).

Great lift/perfume with an attractive edge of greenness which, together with its persistent, juicy acidity, brings an energy to the wine.  £31.00

Backstory – nominated by Alistair Cooper, 1855 Oxford – The Yarra is producing some supremely elegant, perfumed and vibrant Syrah often akin to Pinot Noir and Luke Lambert is undoubtedly one of Yarra’s leading lights. Sipping the Reserve 2010 Syrah with the modest and understated winemaker in the Yarra was a special moment and a highlight of my fantastic journey through Australia.

Fleshier, plummier than the Jamsheed but with fantastic precision.  I like its dryness (vis a vis fruit) very much.  The finish is long and juicy, very precise. £31.00

Backstory – nominated by Heather Badcock, The Solent Cellar – a cool climate Shiraz that is elegant, refined and restrained. It has rich, soft berry, cherry and plum fruit, balanced by a complex savoury character.

A delicious savoury, cool climate style with a lively riff of black pepper and a well judged undertow of savoury, charcuterie oak to its round, juicy plum fruit. £18.99

Backstory – nominated by Simon Woods, Press – It’s a shame this isn’t called 40 Acres, as the world deserves more of this fragrant beauty. On my visit to the Hunter in late 2010, I tried the 2009 and the 2007, and both had the svelte, open-hearted appeal that provided something of an explanation as to why similar wines used to be labelled Hunter Burgundy. But the heady, violet-tinged dark fruit flavours reminded me of another great wine region: the Douro. But hey, let’s not make comparisons, this is terrific wine from a region that many forget as a source of top-class Australian Shiraz.

The bottle was empty by the time I got around the table this wine.  Although I’d tasted it with Bruce Tyrrell the previously week I’d have indulged again!  Here’s my note from the tasting with Bruce – once again, I was blown away by Tyrrell’s Four Acres Shiraz which is made from a vineyard planted in 1879, I first encountered it during a visit to Tyrrells in 2010 when I tasted the 2006 and 2007.  I’d say stylistically this very silky, pretty bright red berry and cherry fruited 2009 is closest to the 2006 in style; it also worked brilliantly in a Burgundy glass. £62.99

Dry, firm, perfumed and savoury with a good depth of red and black berry and plum fruit. Succulent with well-judged sweet, sour and savoury characters. £24.99

Backstory – nominated by Isa Bal MS, The Fat Duck – This has been made since 1987 consistently to a high standard with remarkable difference in style between vintages.

A classic and very classic with its burnish of toasty oak, velvety tannins and plush black forest gateaux chocolate-edged black cherry fruit.  Generosity in a glass.  £34.99