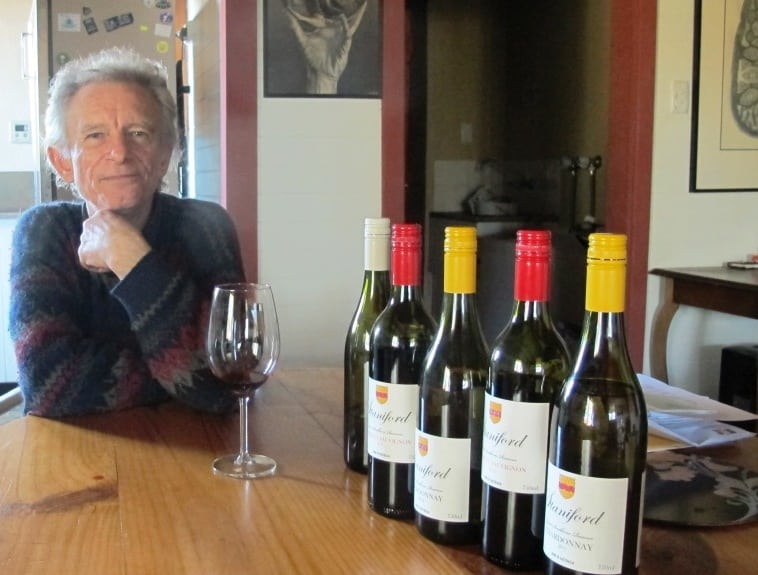 My recent trip to Western Australia uncovered a heap of new talent.  Michael Staniford can hardly be described as new to the game but his own label is relatively new (established in 2010) and I’d not tasted his wines before.  So, for me, Staniford Wines is a discovery and one well worth seeking out if you’re fan of classically proportioned Chardonnays and Cabernets.

In Western Australia you might be forgiven for thinking Staniford had taken a leaf out of Margaret River’s book.  But no.  His inspiration comes from a much less likely region – the Hunter Valley, New South Wales but, more specifically, Lake’s Folly’s founder renowned Cabernet and Chardonnay specialist Dr Max Lake.  Staniford worked alongside Lake for eight years.

Referring admiringly to the 76 Lake’s Folly Cabernet (“still looking good”) he tells me Lake’s philosophy was to pick both varieties early.  In Staniford’s opinion “too many Australian wines are still picked too ripe and lose flavour and structure,” moreover Great Southern has suffered from producers with a foot in two regional camps picking Margaret River fruit first and letting Great Southern grapes get too ripe.

It was in pursuit of flavour intensity and structure that Staniford headed to Great Southern in 1995.  He was Chief Winemaker at Alkoomi for 13 years where he enjoyed making a dry, herbaceous style of Sauvignon Blanc. Suffice to say he’s not a fan of the “sweet, low acid flabby style” which he reports has overtaken the region following the so-called New Zealand ‘‘savalanche.‘  “Pandering to a Coca Cola mentality” he spits.

In common with a fair few of my stars of the trip Staniford’s desire to start his own label was in part down to contract winemaking – “I saw fruit from all around and I’d been thinking about making my own label forever…I knew if I didn’t do it now [in 2010], I never would.”  Staniford originally worked with two vineyards, now three, all leased.

The first Chardonnay vineyard – 30 years old – is planted near Albany airport to the Gin Gin clone.  He reminisces “I tasted the fruit and it was like Lake’s Folly” which he adds was like Montrachet which he visited years ago – with “a finesses about the fruit, a citrusy lemon flavour and slightly tropical character….exotic is what I like.”  Although he rates Albany very highly (he says its maritime climate is very consistent with very little fluctuation) his second Chardonnay site (leased since 2012) is in Mount Barker and much younger – the vines are several years old.  It has some Bernard clones.  Yields are very low.

Seeking to extract flavour from his Chardonnays he presses “as hard as I can.” All the pressings are blended with the free run.  Though he is after texture and a great fan of Burgundy, wild yeast is a no go area for Staniford – “you’re asking for trouble” he says.  Rather, he leaves the Chardonnays in barrel with no sulphur “and that’s where the texture and flavour come from.”

As for the Cabernet Sauvignon it hails from old vines on a low vigor site in Denbarker which, he says, is key for ripening this variety in Great Southern (vigorous vines have too much leaf and shaded fruit).   Even so, Staniford leaf plucks for maximum exposure.  He blends the Cabernet with some Merlot and Petit Verdot, the latter from a different vineyard.  The Merlot is picked at the same time as the Cabernet so Staniford can co-ferment the two varieties together – a technique which I’ve not previously encountered with Bordeaux blends.

Following fermentation Staniford tastes every second day to assess the tannins and racks the wine off skins “as soon as I see any bitterness….I’m looking for big fat chunky tannins – softness not astringency.” 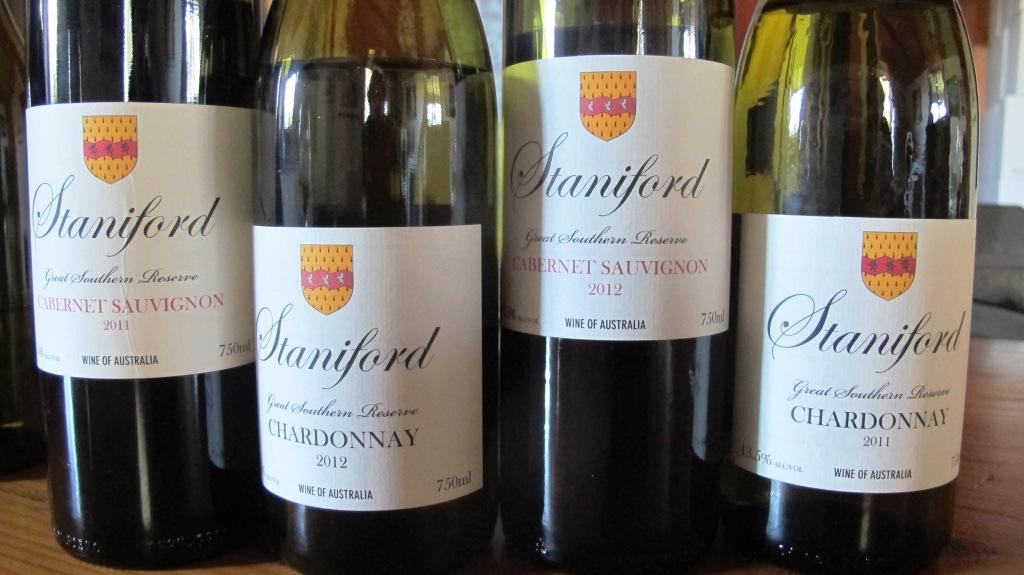 A great year, says Staniford, especially for reds.  This Chardonnay (100% Gin Gin clone) has a good colour – yellow with gold glints.  A savoury nose is intense, concentrated and tight.  In the mouth it reveals ripe, weighty but muscular fruit – white peach, a touch of rock melon and creamy fruit salad. Very well balanced with great depth, layer and length.  Savoury oak (French, 40% new) is worn well.  Staniford bottle ages it for a year before release to enable this powerful wine to come together.   Very good, especially when you consider that this ageworthy wine is priced at $36-40. 13.5%

This vintage features Mount Barker fruit, including 20% of Burgundy clones which, says Staniford, “adds a dimension I haven’t seen before.”    The fruit profile is a touch more restrained, tighter and fresher with fleshy white peach, slightly tarter apricot and a savoury, tangy finish with juicy acidity.  Both oak and acidity are well integrated.  Not as muscular as the 2011 but with great length and line.  13.5%

Staniford had opened this bottle a couple of days previously which confirms that his wines most definitely benefit from time and, at this age, air.  The Burgundy clone content is up to 40%.  This vintage shows firm quince, fleshier white peach and oatmeal on a textured, slightly waxy, savoury palate.  Its impressive palate presence – great mouthfeel – is underscored by lively, mouthwatering acidity. A powerful, poised Chardonnay.

Where the Chardonnays flex their muscles, Staniford’s Cabernets are dry and elegant – very refined.  The 2011 shows sappily animated blackberry, plum, blackcurrant and mulberry fruit of lovely levity.  A mineral-sluiced finish and very fine tannins make for a long, fluid finish with hints of earth, black tea and cedar.  It was aged for 18 months in 35% new French oak.  13%

Though not long in bottle this is a very perfumed Cabernet, darker too, with svelte cassis fruit threaded with balsamic, black tea, bay leaf, cedar and black cardamon.  It’s very unpushed going through – an attractive arc of flavour is well supported by ripe but present tannins.  And again, it’s reassuringly dry.  A lovely Cabernet which, like the Chardonnay, is ungreedily priced at $38-40. 13.5%