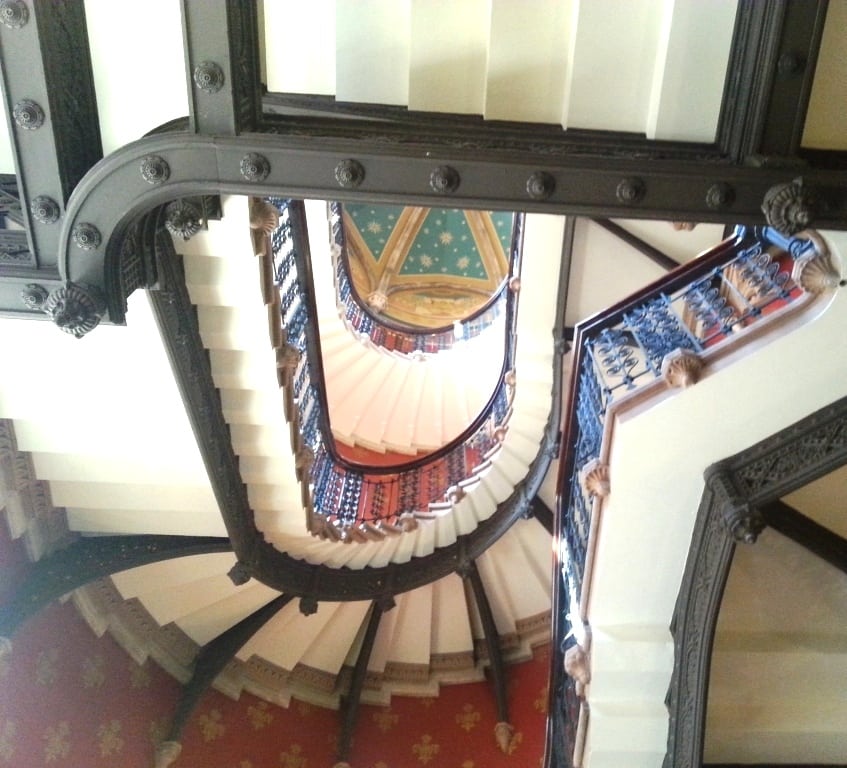 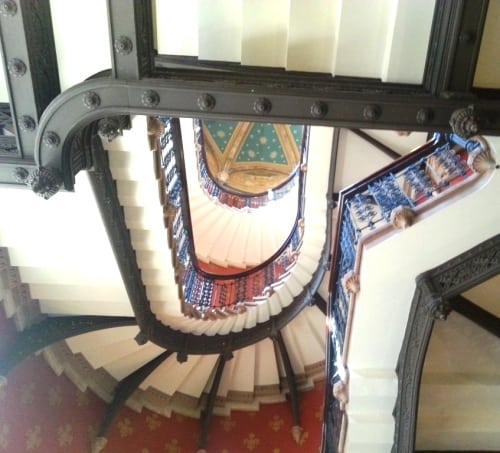 I completely forgot to take any photos at this tasting but I reckon this photo of the venue (St Pancras Renaissance hotel) captures its stairway to heaven verticals.

Mount Pleasant was born in 1921 when Australian winemaker Maurice O’Shea persuaded his mother to buy Old Hill vineyard in the Hunter Valley.  It had been planted in 1880 on rich volcanic soils.  O’Shea planted two adjoining plots, naming the vineyard Old Paddock.  He continued to make the wines following the McWilliams family’s acquisition of the property in 1941 and also planted the Lovedale and Rosehill vineyards in 1946.

When he died in 1956, O’Shea was one of Australia’s most respected winemakers.  The title of Campbell Mattinson’s book about him says it all (and I’m told it’s a damn good read)  – “The Wine Hunter; The Man Who Changed Australian Wine.”  Fittingly, for me the star of the show was Mount Pleasant Maurice O’Shea Shiraz 2011 (though the 2009 gave it a great run for its money).  Very graceful and lithe, it sings of the Hunter Valley’s unique medium-bodied style.  A style which was so much better communicated in 2011 than in 2000 when, says winemaker Jim Chatto, “bigger was better” and the wine was probably aged in close to 100% new  oak, mostly American.  Today, Chatto says Maurice O’Shea “will be the least oaked wine in the portfolio” (leaving aside the Semillons of course!) – he’s aiming to get the new oak quota down to around 20% and to use more 500l puncheons.

Speaking of Semillon, the strength of the 2013 vintage shone through in Lovedale and Eight Acres.  This year Chatto has made just 1500 litres from “a purple patch” of Lovedale “so you can see what Lovedale tastes like as a young, very floral wine.  I look forward to trying it!

A strong Hunter vintage, with good rainfall and generally mild conditions.  The mild cool weather continued into the summer months with good rainfall periods and continual cloud cover.  This pattern continued into the new millennium with one short period of warm to hot weather during late January.  The amazing harvest parameters were the highlight of this vintage, with optimum sugar and flavour, while still retaining great natural acidity.

The growing season prior to the 2003 vintage was dominated by the worst drought on record since 1902.  Spring rainfall was virtually negligible with the only useful rainfall recorded in December.  This resulted in excellent ripening conditions producing white wines rich in fruit flavour but maintaining an attractive balanced acidity.  Reds are the star of 2003, whilst being more muscular and robust in style, they have wonderful balance and depth.

The growing season leading up to the 2005 vintage was excellent with cool to mild growing conditions and excellent, even rainfall.  December saw cool conditions, ideal for veraison and the development of cooler climate fruit characters.  January saw warm days, coupled with cool nights providing excellent conditions for the completion of veraison and ripening.  2005 was a great vintage throughout the Hunter Valley evidenced by the quality of wines across producers.

A very dry growing season with warm days led to an early start to harvest.  The dry conditions prevailed throughout January and February resulting in fruit picked with zero disease pressure.  Crops were low to moderate, resulting in excellent fruit expression.  Shiraz was structured, yet balanced, and Semillon has wonderful flavour and balance.

A very good growing period with above average winter and spring rainfall, resulting in an excellent crop.  Late December in 2008 was very dry and early January 2009 was both dry and hot.  All Shiraz blocks ripened evenly with small berries providing power and concentration of flavours and colour.  Semillon was especially good out of 2009 with wonderful intensity and length.  The best 2009 Semillons will age well into their 20s and beyond.

Excellent growing conditions creating a near perfect harvest.  The fruit reached optimal flavour ripeness at lower to moderate sugar levels, resulting in wines of great natural balance.  Fruit quality was excellent across all varieties.  A great vintage for Hunter Valley Shiraz.  The wines are classically elegant, spicy and medium bodied, with wonderful length and poise.  Semillon is tight and fine, the best examples will mature gracefully over the next 10-15 years.

Heavy rainfall early in 2012 followed by an extremely dry spring reduced yields, but certainly not quality.  Harvest commenced mid January with most Chardonnay, Pinot Noir and Semillon picked before the late summer rain set in.  The Shiraz ripened slowly and will produce some outstanding red wines.  Semillon is the star in 2013 (arguably the best since 2005) with lovely line, purity and intensity.  Overall the 2013 vintage was excellent.

Great intensity and purity of lemon and lime fruit with subtle hints of lemon curd and tufa minerality (think raw porcini). Like all top Hunter Semillon it leads on the back palate – seemingly turbo charged!  Very, very long, with fabulous neon citrus line. 11.5%

This doesn’t have the concentration of the 2013 but it’s pretty and very lively with delicately spicy lemongrass lift, grapefruit, grapefruit pith and limpid, mineral acidity to its long finish.  11.5%

The two bottles which I tasted both seemed a little “pondy” and impure.  11.5%  A sample subsequently sent to me tasted MUCH better with waxy ripe lemon, lemon pith and curd; very toasty too.  Long and persistent with delicious mineral acidity.

I have, clearly too impatiently, almost worked through a case of this wine I bought a few years ago.  It’s very much moving into the next phase which Hakkasan’s wine buyer Christine Parkinson described as of Grand Cru Burgundy stature in terms of complexity and structure when, a few years ago, we tasted the Mount Pleasant Lovedale Semillon 1998.   It has a creaminess of mouthfeel (I’m thinking marrowfat peas, white asparagus) and succulent poached pear as well as classic lemon butter and nutty meringue notes, the whole subtley teased out by long lingering acidity.  11.5%

A little more alcohol and a couple more years and this is broader, less fine, even a little warm with tufa earthiness (rather than minerality), hints of honeyand white asparagus. 12%

Cinnamon-edged blackberry fruit to nose and palate with a hint of coal dust.  In the mouth the tannins are super fine, very refined, which utterly mirrors the delicacy of its intense but in no way dense, very pure, spicy, black and red berry fruit.  Juicier, jewel-bright and firm pomegranate emphasises line and lift. A fruit and (sooty) minerals saturated finish with lacy acidity lingers long. This is a delightfully fresh, finely honed medium-bodied Shiraz. Outstanding precision and finesse.  It was gently pressed to French oak barrels (30% new, 300-500l) for 18 months maturation. 14.5%

The 2010 is lovely but the 2011 is a hard act to follow! This is a softer, broader wine with more evident creamy mocha oak and sweeter, fleshier plum fruit.  But, as is the case across this flight, as it opens up in the glass, drier, more savoury nuances emerge, floral notes too.  Liquorice, sour plum, cherry lips and bitter chocolate layers enhance complexity and bring balance. Svelte tannins and good acidity make for a long, flowing finish.  Again, great intensity and length, here with a little more oomph, but still within a medium-bodied frame.  The wine was matured in a combination of new and second use French and Hungarian oak for 22 months. 15%

Like the Lovedale Semillon, this 2009 is powerful and very expressive.  It shows lifted spicy, cinnamon-edged sweet red and black berry and plum fruit and, with a swirl or two, swiftly unravels a tumult of minerals, earth, coal dust, damask roses, perfumed kirsch, liquorice, mocha and bitter chocolate.  Vivid acidity breathes life and layer into this wine – like oxygen to a fire it stokes up the energy – this Shiraz positively glowers.  Marvellous.  The wine was matured in a combination of new and second use French oak barriques and hogsheads for 22 months. 14.5%

Potent, riper fruit with the focus very much on black currant and berry flavours, which receive excellent support from equally powerful, firmer tannins. Floral and bitter chocolate notes are joined by leather and linseed oil, smoked meat, mocha and earth.  The acidity is firm.  A big, meaty, mineral wine; if not the fairest, certainly the sturdiest of them all.  Impressively hewn.  Aged in new and second use French oak barriques and hogsheads. 14.8%

On first impression, very ripe and bold of expression with lashings of perfumed sweet blueberry and a double whammy of sucrosity courtesy of the oak.  And then the earth, coal dust, leather and clove emerge from beneath this cloak of fruit and assertively take centre-stage.  Fine, very powdery, sooty, mineral, iodine tannins emphasise the savouriness.  So much in the tank here.  I can well understand why these wines have such a great track record for ageing.  15%

This was sealed under screwcap but there’s a dustiness to this wine which, like white noise, is a rather irritating constant. The palate is sweet and savoury, with jammy plum, leather, linseed, blood, dark spices and earth.  A little hard on the finish.  Disjointed.  14.5%

The only wine sealed under cork and it shows.  Much more developed, madeirised even.  Cherry chocolate truffle notes make for an oversweet palate.  I’m missing the spice, leather and earth.  14.5%

The Cellar Aged wine is sooo much more interesting than the young (2013) release.  This reveals lemon butter on toast to nose and palate with earthy tufa and horseradish piquancy.  Nice complexity and, with lovely rolling acidity, very persistent.  Very flavoursome for 11% abv.

From a block within the Lovedale vineyard which was planted in the 1980s.  Chatto says it always produces floral, textural wines.  A lifted nose shows snowpea and grapefruit with ripe lemony edges.  In the mouth it’s shapely and limpid with a slow burn delivery of lingering flavours.  Very good; rounder than your average Hunter Semillon at this stage of the game but with no loss of rock (minerality) and roll (acidity).  10.9%