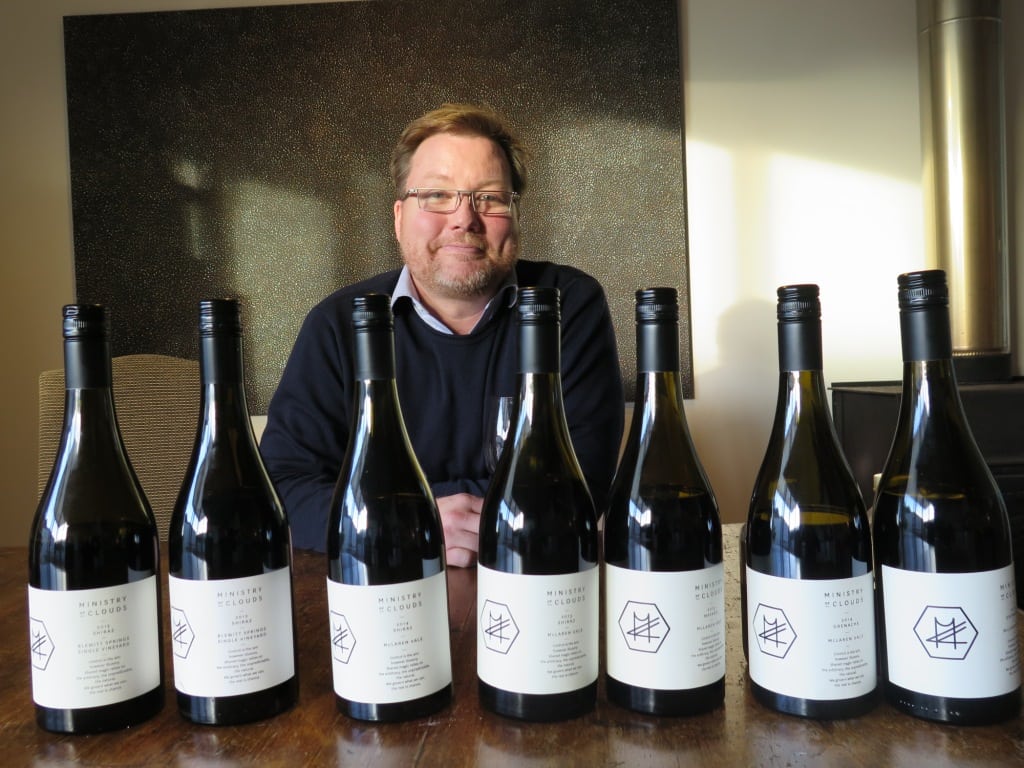 Ministry of Clouds, McLaren Vale: life beyond the larger than life men and big wines After 25 years, Ministry of Clouds‘ Julian Forwood and Bernice Ong jacked in their successful wine marketing careers to make wine for themselves.  Some might have said this couple had their heads in the clouds but not one James Halliday, who included them in his Top 10 newcomers in the 2015 edition of his Australian Wine Companion (which is how they came to my attention).

I met Forwood at the couple’s McLaren Vale home for a tasting in August. Naturally, I was curious to know how it all started.  It would seem that the GFC played its part.  When major players like d’Arenberg and Hardys “took their hand off some fruit,” Forwood, Ong and other like-minded souls seized the opportunity to indulge “a penchant for old vineyards – dry grown sites with a magic about them, with the most beautiful aspect and obsessive owners.”   What’s more, to present those sites in a different light.

Speaking with no little passion about “another side to Australia,”  Forwood opined “there has to be a life beyond the larger than life men and big wines about weight, power and strength. Australia can do that, but it can do other things as well.” Specifically, he and Ong are keen to show a side to Australia “that communicates about the quality of the food and the advantages of  multi-culturism.”

With access to lots of great, older wines, membership of a blind ‘options’ wine tasting group gave the pair inspiration for these “other things. “ Forwood vividly recalls “Chateau Rayas 1978 [a 100% Grenache Chateauneuf du Pape] freaked us out – we all thought it was Grand Cru Burgundy because it had the colour and florals of old vine Burgundy.  I reckon it can be done – certainly very particular people are capable of doing it – if some want to turn the level up to 11, others are at the opposite end of the scale, picking early, gently working wines in cement not oak so it could be Pinot (but the alcohol sweetness gives it away).” Working with six Grenache parcels ranging from 60-85 years old, Forwood asserts, “we don’t need to be slavish about a single site…we’re looking for a myriad of different weights in the mouth.”  Although the couple don’t own or manage any vineyards Forwood stresses they always choose the picking time and don’t take fruit every year.  The picking time depends on the level of whole bunch – while “old timers say look for [Grenache] bagging up a bit,” Forwood disagrees, saying “when it starts to lose turgidity, we think you’re taking a huge risk so we pick when the grapes are still turgid and try and get lignifcation, because we want whole bunch without sappy green flavours.”  Clearly it’s a tricky balance between freshness, fruit and lignification where flavour ripeness is slow to come for Grenache.

The wines are made in Tim Geddes’ shed. Some parcels are vinified in inert fermenters, some in oak.  Whole bunch is adopted where possible and whole berries preferred.  Although cold soaks and extended post-fermentation macerations of up to 9-10 weeks are undertaken, Forwood says, “we’re not looking to extract every last piece of colour and flavour,” – pumping over is light.   Overall, the aim is “not pure bright and simple…we want some soul underneath that.”

This single vineyard on loam over ironstone Grenache comes from 66 year old vines in McLaren Flat.  On the upslope of McLaren Vale range it benefits from cold air drainage from the hill.  Being north-facing, it’s a relatively early site and produces beautiful, very lively pure, very juicy sluiced fruit which retains acidity and fragrance very well.  A delicacy which is retained by ageing this wine in a 3000l old French oak foudre.  The texture has a lovely granular quality (this wine saw 10% whole bunch) 13.8%

From two vineyards in very different parts of McLaren Vale.  Eighty per cent hails from Sue Trott’s Blewitt Springs’ small-berried bush vines (a 2015 sample revealed spicy, well structured fruit with more pucker of acid and sandy tannins than the other site).  It was planted in the 1920s on grey sand over clay, some blocks quite stony.  The balance comes from a c. 20 year old south-facing block in the Mittillo vineyard just at the entrance to McLaren Vale, which is prized for its aromatics (a sample of the 2015 is loaded with orange peel, Campari and spice notes).  The south facing site is planted on deep white sand with mixed underlying geology. Deeper in hue than the 2013, the 2014 has the pronounced turkish delight inflection Forwood associates with Blewitt Springs.  Though concentrated, its blackcurrant and tight redcurrant core of fruit has a lovely translucency. Some old vine earthiness too.  This wine saw 10% whole bunch, which was layered in the middle of the ferment.  It was aged in old oak puncheons. 14.2%

Both this wine and the 2014 Shiraz are a blend of fruit from a famous 72 year old dry grown Blewitt Springs vineyard and a younger more structured parcel from the renowned Hickinbotham vineyard in Clarendon.  With 25% whole bunch it’s a peppery, spicy Shiraz with a more conventional heart – a creamy mid-palate of red and black cherry and berry fruits with just a hint of earthiness.  Ripe but present tannins frame the creamy fruit, while persistent acidity teases out a long finish.  Very good.

Picked earlier than the 2013 the 2014 is really lively, long and spicy with nice energy – a spring in its step.  Naturally fermented with around 35% whole bunch and aged in a mixture of 3 year old hogsheads and a large old oak tank for 12 months, it has a distinctly savoury (charcuterie/smoky bacon), earthy dimension to its bright red and black fruits. Of the 13 and 14, I’d say this one more successfully expresses the couple’s aim of producing “a restrained, spicy, fine boned example more akin to those of the Rhone Valley.”  Nice work.  13.8%

This single vineyard Shiraz comes from the oldest (52 year old) section of the Patritti’s Blewitt Springs vineyard.  It’s a very savoury expression of site, but with a distinctly different savoury profile to the other Shiraz in the portfolio. Much more vegetal with fenugreek and mulchy autumn leaves/radicchio to its sweet, concentrated plum fruit as opposed to the pepperiness of whole bunch, though it does see 20% whole bunch.  For Forwood, “the vineyard character is stronger than anything” – an opinion which is reinforced when I say this wine puts me in mind of Steve Pannell’s just released Koomilya DC Block 2013 Shiraz, which in turn put me in mind of Kay Brothers Basket Pressed Shiraz 2013 (and reminds me of a discussion with Clare Valley’s Col McBryde about Adelina and Wendouree Shiraz). Looking at me beadily, one eyebrow cocked, Forwood tells me that the three McLaren Vale Shiraz are sourced from vineyards just 400m apart.  Like the Koomilya and the Kay Brothers Shiraz, Ministry of Sounds Blewitt Springs Shiraz is an unshowy but confident Shiraz  – very much on the backfoot – no shouty attack here.  Rather it assumes and holds its position centre-stage, as though one had put a big round stone in the middle of your mouth.  With simply terrific balance, it effortlessly exudes power without having to whip up a storm of fruit and oak. Even its prodigious cloak of cashmere tannins is worn lightly.  It was aged for 11 months in old Francois Frères and Saury barriques. 14.5%

Ministry of Clouds is imported into the UK by David Knott of The Knotted Vine.  Incidentally, he is also bringing in a favourite Great Southern producer’s wines – Andrew Hoadley’s La Violetta.