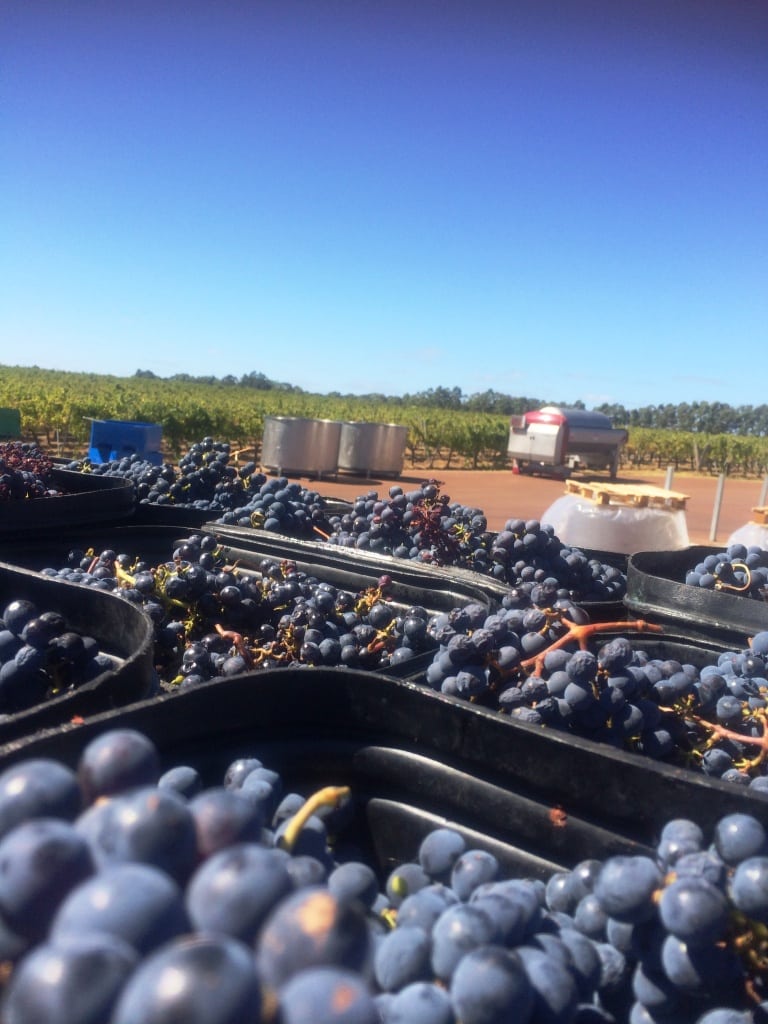 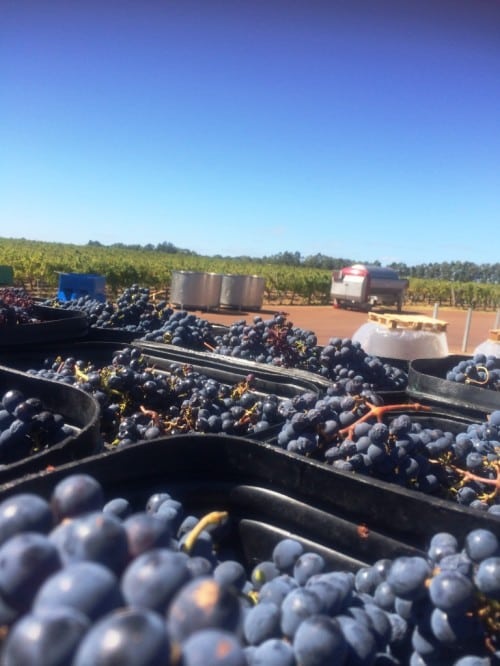 In the queue – Cabernet grape harvest at Cullen

Margaret River has had a truly enviable run of great vintages.  So much so that, when I asked David Hohnen’s winemaker Trent Carroll for his take on the year, he confessed “I’ve really found it hard to write vintage reports in the last few years as it seems Margaret River hasn’t had a blip on the radar for some time (and I think people may be getting tired of hearing about another perfect season)… however this year truly is the stand-out for myself!” Here’s the word from on the ground:

The 2014 vintage in Margaret River has been built on a truly sound foundation with excellent rainfall recorded throughout 2013 (over 1,000 mls as an average throughout the wine region) thus providing a solid platform of sub-soil moisture before almost completely stopping from December through to present.

There has been minimal rainfall reported in the Summer period very much less than the average of 4%  so the region is truly in a ‘classic’ Margaret River weather pattern at present. Similar conditions to these were seen in 1994, 1995, 1996, 2001, 2004 and 2010 that all went onto be considered and reported upon as being very good to outstanding Margaret River vintages.

With ideal diurnal weather conditions coupled with an almost constant breeze, unusually from the South East, there has been almost no disease pressure. Once again in 2014 we have a huge amount of Marri blossom, which is still flowering even as we head into Autumn, so consequently minimal bird damage has been reported.

The white wine vintage has all but been completed apart from those in the far south of the region around Karridale. Exceptional fruit has been grown showing very intense varietal flavours. The aromatic varieties of Sauvignon Blanc and Semillon are typified by crisp acidity on the palate with fresh lemon / lime, citrus blossom extending to stone fruit characters on the nose.

Chardonnay also has a superb line of natural acidity balanced with soft and fine phenolics with a flavour profile ranging from citrus, nectarine to summer peach.

Yields for Sauvignon Blanc and Semillon are about average with Chardonnay less so due to strong to stormy wind conditions experienced at flowering in Spring.

Some early ripening red wine varieties have already been harvested from the northern and central areas of the region. These are displaying fruit flavours of bright red and purple with great freshness, ripeness and vibrancy.

With the Autumn season now well entrenched milder conditions prevail during the day and cooler to chilled night time temperatures being recorded as well. This is perfect for Cabernet Sauvignon from Margaret River enabling full physiological development especially in concentrating its flavour spectrum and in softening tannin levels naturally.

All Signs Point to Margaret River’s Eighth Great Year in a Row.-Margaret River is midway through what so far has been another textbook vintage for the region, bringing its run of consecutive great vintages to eight.

“This season we have once again experienced supreme conditions of timely weather patterns and very minimal extremes. The variation between the last few vintages in Margaret River has been all about the finer details and micro subtleties. We have been incredibly lucky,” said Virginia Willcock, Chief Winemaker of the region’s founding wine estate, Vasse Felix.

“I’ve heard some other local producers say 2014 may be the best vintage yet in Margaret River, but I never like to make calls like that until we have bottled the wines,” said Willcock, who is in the midst of her 23rd Margaret River vintage.

The harvest at Vasse Felix began with the handpicking of Chardonnay from the Estate’s Wilyabrup Vineyard on 3 February. Chardonnay, followed by Semillon and Sauvignon Blanc completed harvest by early March. The first of the red varieties, Merlot has been harvested and Shiraz is being picked. Malbec, Cabernet Sauvignon and Petit Verdot are yet to come.

“Our white varieties came off in beautiful condition starting with Chardonnay. Reasonable yields were obtained despite a handful of blocks being exposed to heavy storms in Spring, reducing their cropping potential. Overall, we are seeing Chardonnay with wonderful intensity and balance, and particularly good natural acidity.”

“Classically, the start of March has seen a dramatic decrease in the night time temperature and the days are mild but sunny. This is the ideal recipe for the slow and steady finishing of the reds, which at this stage look to have intense varietal fruit power, while the tannins are softening beautifully.”

“Cabernet is looking excellent. With no rain on the horizon and cool conditions we should see some exciting Cabernet from Margaret River in 2014.”

The season has offered slightly milder conditions when compared with recent years, which has allowed for ideal physiological ripening of all varieties. The Marri trees have flowered extensively and progressively, keeping the local birds at bay.

“The only concern for us has been an unexpected interest in the berries from native kangaroos requiring us to net the vines to protect from them instead of birds. So from a winemaker’s perspective, there isn’t really anything to complain about!”

I followed up this month with Willcock to find out how the red harvest had gone.  Here’s her take: “An excellent season for reds. Reds enjoyed a mild season which enabled long, slow ripening season. As a result the fruit developing lovely perfumes and ripe tannins. Yields were down overall on reds mostly due to Spring storms. There is good concentration of flavour, but still with Margaret River’s elegance and finesse. Some late season rain did not effect the remaining few sections of clean, healthy fruit; with prior dry ground soaking it up with no effect on the vines. Another very exciting vintage to come.” 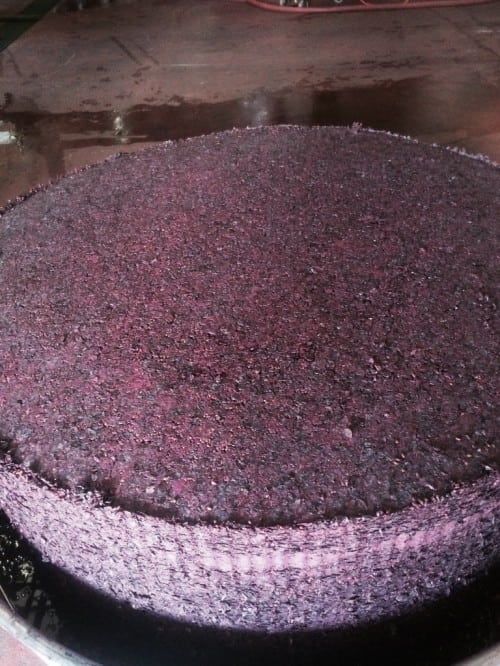 Pressed reds at Cullen – the cake

Cullen are one of the first to pick.  Here is Vanya Cullen’s pithy take on the 2014 vintage.

After one of the wettest seasons on record right into December 2013 we were then blessed with warm dry conditions with no rain until yesterday  26th March. Perfect for quality whites and reds.  In particular Sauvignon blanc semillon Cabernet Sauvignon with low Ph, reduced yields and outstanding quality.

We have experienced another stellar season, which lines up nearly half a decade of fine vintages in a row. Locals are becoming increasingly bashful when asked about the year as our East Coast counterparts have found themselves in trying conditions again. We are quietly saying that if the last few vintages have been 9 to 10/10’s then this year must be considered an 11 out of 10!

The wettest winter for some time was followed by a dry and warm spring, punctuated by a wild spring storm that reduced yields of all white varieties as it coincided with flowering.

A warm and dry summer with plentiful sunshine and no significant heatwaves set us on the path to two distinct harvest periods for white and red varieties. The reason that this year stood out was the absence of any heatwave during the white harvest coupled with cool evenings. The mean temperature for Feb was 20C which was the coolest since 2006 and sounds like we experienced cool days, far from it. Warm daytime temps were moderated by below average night temps with many nights recording sub 10C.

The benefit of the cool evenings is evident in the retention of natural acidity in both red and white varieties. Reds experienced perfect ripening conditions with Perth recording a record 100 days without more than 1mL of rain from Nov-March.

All wines have wonderfully ripe tannins and a fine, long and elegant structure (thanks in part to higher acidity), which should see these wines destined for a long cellar life.