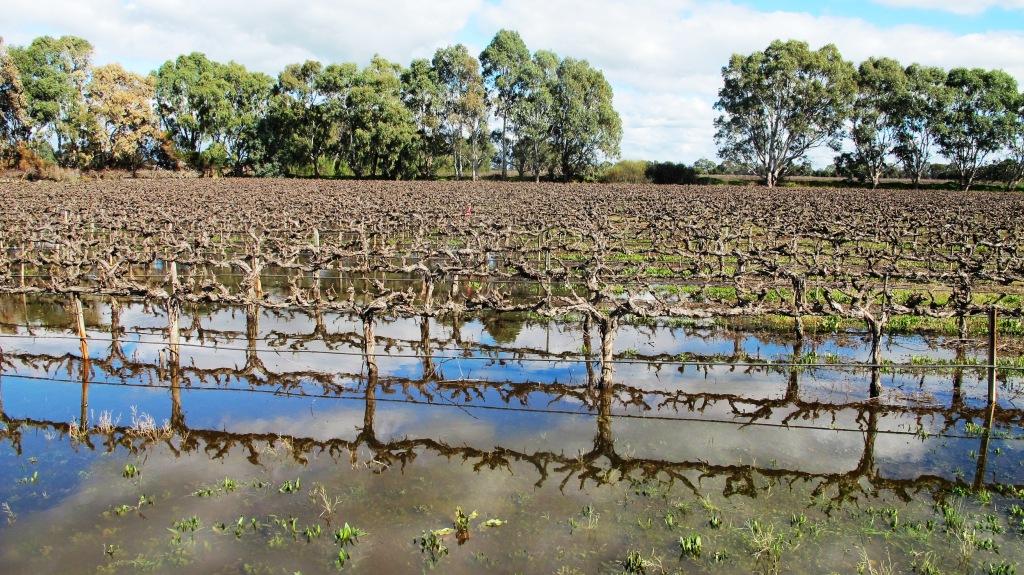 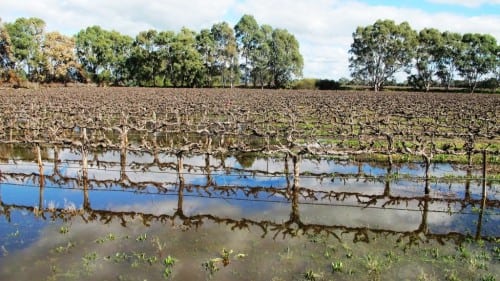 First awarded in 1962 and then annually to the producer of the best one or two-year-old dry red wine in the Royal Melbourne Wine Show, the Jimmy Watson Trophy is one of the most prestigious wine awards in Australia.

At this year’s London leg this Wednesday, we focused on the 2009 vintage – much lauded, of course, in Bordeaux. Wolf Blass Black Label came joint second, rubbing shoulders with Château Latour, Château Léoville-Las Cases, Château Mouton-Rothschild and Ridge Monte Bello, all of whom were pipped to the post (by one point) by Ducru-Beaucaillou. Another feather in the cap for Wolf Blass’ Chief Winemaker Chris Hatcher (pictured), who just scooped the IWSC Winemaker of the Year Award. Black Label looks well placed to consolidate its reputation on the global stage when overall scores are tallied after Monday ‘s final round of judging in Melbourne.

Which begs the question, why isn’t Langhorne Creek as well known as its Fleurieu Peninsula neighbour McLaren Vale or the Barossa to the north, both of which similarly concentrate on Shiraz and Cabernet Sauvignon?  Rather, in their recently launched 7th edition of The World Atlas of Wine, Hugh Johnson and Jancis Robinson muse “Langhorne Creek, it could be argued, is South Australian wine’s big secret.”

Hardly because it’s a “Johnny come lately” wine region.  Like the Barossa and McLaren Vale, Langhorne Creek can trace its winemaking history back well over a hundred years, to when Bleasdale’s Frank Potts purchased the first sections of land on the fertile Bremer River at Langhorne Creek and planted his first vines in 1858. It’s even home to the world’s oldest officially recorded family owned Cabernet Sauvignon vineyard – two acres at Brothers in Arms famous Metala vineyard – planted in 1891 and still going strong.

Wolf Blass is not the only big gun blending Langhorne Creek fruit into multi-regional blends – Pernod Ricard, Treasury Wine Estates and Casella are all at it.  Johnson and Robinson estimate that less than a fifth of the Langhorne Creek’s wine is sold with Langhorne Creek on the label. With such strong interest from Australia’s biggest producers, land under vine has increased ten-fold from around 500 hectares until the mid-1990’s to around 6000 hectares today.

But there has also been an increase (albeit less dramatic) in the number of growers now making their own wines too and, it follows, the number of bottles labelled Langhorne Creek.  A fortnight ago, I had an opportunity to look at 40 100% Langhorne Creek wines (most made by family-owned boutique producers) when I was asked to present a Langhorne Creek trade masterclass, preceded by a freepour tasting.

The aim of the regional wine body was to raise the region’s profile. You’ll find a complete list of the wines shown at the freepour event below, with my highlights in red type.  But first, I thought I’d share with you some background information about what makes this region tick.

I reckon Geoff Hardy (5th generation descendant of Thomas Hardy) nailed the region’s secret recipe when he explained to me what drew him to Langhorne Creek. This is what he said:

The climatic influence behind these vital statistics?  Onshore southerly winds – the so-called Lake Doctor – which blow directly from the chilly Southern Ocean across Lake Alexandrina (a large body of fresh water, which is fed by the River Murray).  These winds (and the cloud cover which comes with them) reduce sunshine hours and temperatures during the afternoon and, especially, overnight.

As for rainfall, although Langhorne Creek is cooler than McLaren Vale and the Barossa, averaging only 140 mm during the growing season, its rainfall is slightly lower.  This is because Mount Lofty – the range between Adelaide Hills and Langhorne Creek – is a rain shadow which reduces the chance of rain at harvest (and additionally provides a modicum of protection from hot north westerlies).

Aside from reducing disease pressure, the lack of pitter patter combined with temperate summer weather equates into a long growing season (typically, a good two weeks later than McLaren Vale), resulting in good flavour accumulation with balance.  Grapes fully ripen, but the Lake Doctor ensures that vines produces vibrant varietal flavours. With no prolonged heat on the vineyard, fruit is round and supple – very rarely stewed or cooked.

The longer ripening period also accounts for the region’s signature present but plush, ripe tannins which, together with its round, juicy fruit, explains Langhorne Creek’s reputation for soft, approachable wines.

The Willson family of Bremerton Wines

Which is NOT to say that Langhorne Creek’s wines are not ageworthy.  Says Craig Willson of leading producer Bremerton Wines “Langhorne Creek has always produced red wines that age gracefully but present as soft, silky wines at a young age….Acid and tannin usually drive the age of wines and Langhorne Creek wines have naturally high levels of both even though they do not appear pronounced on the palate.”  Indeed Lake Breeze Cabernet was a recent finalist in ‘The Wine of Provenance’ award, based on the longevity and consistency of their 1992, 2004 and 2010 vintages. Winemaker Greg Follett adds “the wines have bright fruit and loads of it and this is the key [to ageing] in my opinion.”

In many wine regions of the world, especially in the northern hemisphere winemakers are unlikely to equate irrigation with quality.  But given Langhorne Creek’s exceedingly low rainfall (averaging around 380mm/annum), a lack of water could be disastrous in the event of drought.

However fortunately, the region has significant reserves of quality water on tap which can be drawn upon during the growing season as and when required.  Firstly, because it is largely comprised of flat plains, Langhorne Creek benefits from winter flood water – the eastern Adelaide Hills run-off which comes down the Bremer and Angas rivers.  Traditionally Langhorne Creek was entirely reliant on this.  Today those 400ha of (mostly older) vineyards located on the flood plain still benefit from flood irrigation during the winter – up to 1-1.5m at Bleasdale pictured.

A system of levies and channels holds the water until this winter flood water saturates the soil (usually between 24 and 48 hours).  Then it is released via ‘floodgates’ to enable downstream neighbours to benefit from it. In consequence, minimal (usually no) irrigation is required later on during the growing season because floodwater reserves in the floodplain’s deep clay loam soils provide a buffer against vine stress.

If (drip) irrigation water is required during the growing season, growers can draw upon dams or underground aquifers which are used to store the flood water. Alternative sources of irrigation water include Lake Alexandrina (which also provides welcome humidity via the Lake Doctor) or a recently installed pipeline direct from the Murray which has given the region long term security. Langhorne Creek currently boasts one of the lowest salinity water sources in Australia’s vineyard areas.

For Follet (pictured), another advantage of the winter floodwater is the gentle deposition of silt which helps keep fertility up. As for the impact of soil types, heavy black alluvial flood plain soils closest to the river make a full but rounder, softer style.  Flood plain vineyards on sandy/silty loams over red clay – often maritime limestone shale – offer excellent moisture holding without producing excess vigour in vines.  They are prized (especially for Cabernet), as the clay provides a barrier to the vines getting too much water and there is more of a gradual stressing leading into vintage.  Sandier, lighter soils off the traditional flood plain tend to produce the most intense Shiraz.

Approximately 75% of all production comes from Cabernet Sauvignon and Shiraz – a qualitative as well as quantitive strength of Langhorne Creek.   For South Australian reds, Langhorne Creek’s wines are particularly supple, round and fleshy, with marked freshness and juice thanks to its relatively temperate climate and healthy soils.  Quite high yields too, especially on the fertile flood plain soils though, as Follet points out, “vines are in balance when they are yielding at these levels.”  And I’d agree with that.  Both my audience and I enjoyed the lack of hyper-concentrated, high octane fruit bombs which can be associated with low yields and hotter regions.

Outside this magic circle Verdelho (71ha) and Malbec (42ha) have become regional niche specialities.  In common with the rest of Australia alternative varieties have recently enjoyed a surge of interest: Sangiovese, Fiano, Aglianico, Montepulciano and Pinot Gris/Grigio are making their mark in Langhorne Creek.

Plus thanks to Cleggett Wines, the region has its own USP. It is the home of White and Bronze Cabernet Sauvignon (pictured, middle and bottom) about which you can read more here.  For me both had the tell tale herbaceousness and structure of Cabernet, which made for a characterful dry white (and brought an extra layer of interest to Cleggett Men of Kent, which incorporates a dash of White Cabernet).

A taste of 100% Langhorne Creek

My highlights are in red type.

Although the Bleasdale wines showed more obvious concentration of fruit, with their juicy persistence, fine tannins and judicious oak use, these were no wannabe McLaren Vale lookalikes. Again, I liked their regional expression.

It’s a unique quality which, it seems to me (combined perhaps with less elevated price points) presents the way forward for a region keen to differentiate itself from Barossa, McLaren Vale and Coonawarra Cabernet and Shiraz.