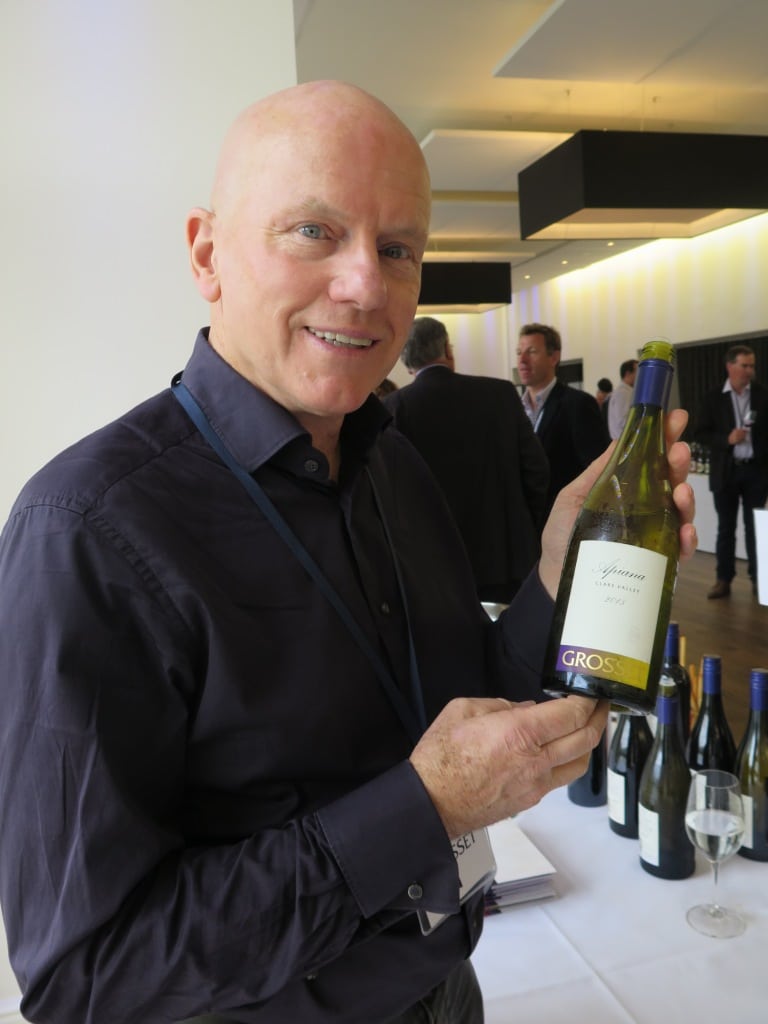 Jeffrey Grosset: 35 years of Riesling; now for something new 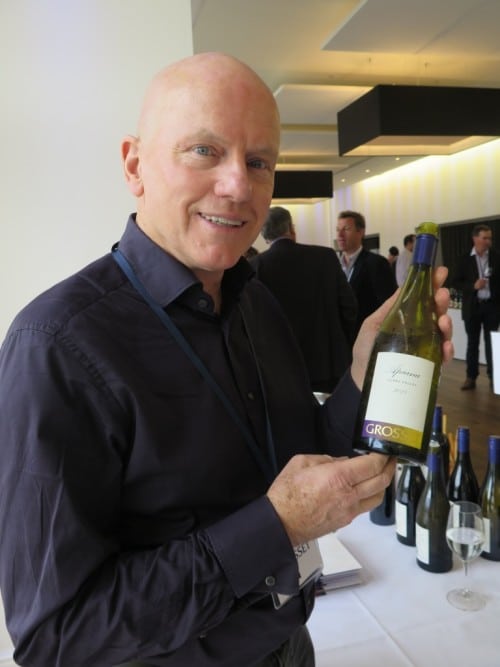 When I visited Grosset back in 2008, there was talk of Fiano.  This year, he has released the first fruits of his Fiano labour (it took 8 years to get a crop) in the form of Grosset Apiana 2015, a blend of 62% Semillon, 38% Fiano (reviewed below).  I caught up with the softly spoken but super-focused winemaker in London to taste it alongside the 35th consecutive release of his iconic single vineyard Rieslings, Polish Hill and Springvale.

It was a fine excuse to open older vintages of these fine Rieslings.  Reflecting on their success, Grosset confessed it had surprised him a bit.  Clearly, he is gratified that Polish Hill, his best known wine, is also his biggest volume wine.  But loyalty and trust, he said, “transcend the business” – knowing that, for those long term customers at the core of his success, his wines have been a part of every family celebration.

In the beginning, it was a case of cutting his suit according to his cloth, which must have been strange after the last job.  Grosset was senior winemaker at Lindemans’ leviathan bells and whistles Karadoc winery.  Back then, it produced a sizeable chunk of Australia’s vinous output.  With help from the bank of mum and dad (loan still outstanding, confided a sheepish Grosset) he could only afford to make a small amount of wine. His first big decision revolved around what it should be.

Grosset had been a Riesling fan since his teens and, following Karadoc, opted to visit Germany, not France like his peers.  So Riesling was the logical choice, especially in Clare Valley.  Putting it simply, “Riesling is one of the greatest wines of the world,” he said.

As for Apiana, force of logic also played a hand.  Or you might say the hand of God.  Referring to the impact of climate change on Clare Valley, Grosset told me that this year’s harvest came in 30-40 days earlier than the region’s 40 year average.  So in common with other Australian producers, it has made sense to plant less thirsty varieties which are better adapted to prevailing conditions.

Grosset vintage report:  2015 was characterised as a fine, mild and early vintage. The Clare Valley had a very mild December, and a cooler January, with just enough rainfall to keep the vines healthy. Crop levels were below average, very even, and grapes were picked in excellent health. Harvest started on 8th February and was one of the earliest and most compressed in 35 years. Grapes were hand-harvested by a team of 60 workers – “like ants all over the vineyard” – to ensure all the crop was picked at optimum condition.  All the Riesling was picked within 9 days and 80% had been crushed by the 10th day.

So pale it is practically water white.  More aromatic than Polish Hill, Springvale’s nose has a spicy bay leaf/kaffir lime edge – more pronounced than I can recall in previous years, but I have noticed greater savouriness and minerailty in recent releases, which brings a pleasing extra dimension to this wine.  Grosset attributes this to vine roots having hit the Mintaro slate 3.5m below Watervale’s classic limestone (Springvale is planted on a faultline). Still, true to Watervale, the longer leash fruit comes up to meet you – rich and intense lime and zingier green lemon.  And keeps going.  As I’d expect from Grosset, this Riesling has plenty of palate presence and persistence.  The chalkiness – which adds depth and chew – is ultimately no match for the citrus flavours, which bowl merrily along to a lip-smacking, long finish. Excellent. 12.7%

I wrote up the 2012 vintages on their release here and, ‘nuff said, bought some very shortly afterwards.  Grosset rates it as one of the best yet (my report here).  Tasted this September, though it has gained a little in texture and richness, both nose and palate remain taut and pithy.  The palate is hugely mineral and chalky, the lime fruit thoroughly mineral sluiced.  Deeply impressive still.  Fabulous line and length.

The summer heat wave (which didn’t affect the vines which had not begun veraison) was book-ended by mild weather, especially much cooler nights than usual in February.  Springvale 2009 charmed me on release and it worked its charm all over again, even if it wasn’t as tensile and impressive as the 15s and 12s (which I suspect will develop more slowly).  Significantly deeper in hue than both these vintages and with a honeyed nose, you’d have thought it was significantly older.  Still, the honey-licked citrus fruit is juicily persistent and pure, with delightful integration of acid and fruit, so it still gets a big thumbs up from me.  While I have no plans to broach my tightly wound 2012s, the 2009 delivers a lot of pleasure right now (and will keep for another several years plus I should think). 12.5%

Very pale with green glints and similarly delicate floral and spice (lime blossom, talc and kaffir lime) notes to the nose, traces of which follow in the mouth.  As usual, Polish Hill’s deep dive palate fair takes the breath away.  Where the Springvale is convex, Polish Hill is concave with terrific back palate resonance – a reverberating minerality which subsumes the finish.  Prodigiously long, cool and precise with a potent backbone (seemingly telescopic) of lemony acidity.  Outstanding.  12.7%

Showing a touch of (attractive) lime cordial development on the nose, which in no way prepares you for the palate.  Let’s just say I’m very glad I stashed away some bottles. Phenomenally long, tight, firm and chalky, the 2012 just kept building in the glass.  Wow.  Towering best encapsulates it, though the description reminds me of Black Tower Riesling – what a world apart that is from this wine! 12.5%

A yellowish hue like the Springvale but firmer despite the honey hints and lime cordial.  The acid backbone never feels far away. Minerals – tufa/fresh white porcini – underpin the finish.  Not as complete as the Springvale in this year.  13%

Now for something new 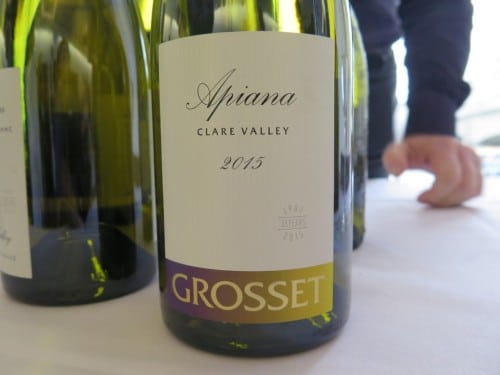 Apiana is a blend of 62% Semillon, 38% Fiano in this first vintage.  It takes its name from the Latin name for Fiano, ‘vitis apiana,’ which references the bees who were attracted by this Italian grape’s sweet juice. Grosset ordered Fiano cuttings from Chalmers (of 21st Century Vino fame) in 2004 at the same time as his partner, Mount Horrocks’ Stephanie Toole, ordered Nero d’Avola (she has also just released her first, bright and juicy 2013 Watervale example, notes to follow).  Grosset’s Fiano is planted in Watervale at 460m on hard, slate-like red rock with a poor orange/red loam for topsoil.  Precisely where a geologist told him not to plant, because it was so rocky.  He told me that the Fiano clone, then the only one available, was low yielding too (as I’ve mentioned above, only producing its first significant crop in year 8!)  But from his perspective, this double whammy of stress is no bad thing where Italian grapes in fertile soils can be insipid.  The vines grow alongside the Semillon with which it is blended, but are significantly lower yielding (producing less than one bottle per vine).    The different varieties were fermented separately then blended – “we don’t do a co-fermentation because I like to control things.”    As to the blend, Grosset explained he felt this wine needed the Semillon “for a cleaner citrus palate,” while the Fiano is “for texture.”  With a focus on fruit purity, only the free run made the cut and no oak was used. It’s very much a Grosset wine in the sense it’s dry, firm, fresh and chalkily mineral, with a hint of greenness (angelica?) to the well balanced, lemony finish.  It also has the tell-tale floral/herbal spiciness I found in this vintage, both in Grosset’s wines and in Toole’s 2015 whites.  Because Fiano is the junior partner in this blend, it’s difficult to compare Apiano to other examples of Australian Fiano.  However, when Grosset talks texture, he is clearly after a much more subtle character than I’ve encountered with most of the straight Fianos I’ve tasted (which might utilise oxididative handling, including an element of barrel, solids or skin contact/press juice – techniques which Grosset is concerned might “compromise the structure).”  Smiling wryly when I delivered my verdict about his new (so very Grosset) white, Grosset observed “we thought we were breaking loose but it’s within these [terroir driven/stylistic] confines.”  Apiano’s restraint and balance reflects the footprint of the site and the hand of the winemaker.  12.5%

Apiana is not Grosset’s only new baby.  Grosset 45 Spirit is a single-[pot still]-distilled spirit made from organic Riesling grapes from Grosset’s vineyards – the wine, not the skins.  I’m no expert on spirits but my whiter than white neat snifter absolutely captured the spirit of Riesling with its floral perfume and purity.  It was very smooth too.  Grosset first made it in 2014 and is very happy that spirits seem to be back on the agenda down under – gin and whisky distilleries have shot up, he observes.  Plus, like here, cocktails are very much alive and kicking.  Grosset recommends Grosset 45 on the rocks with an equal pour of Cocchi Americano, a slice of orange and dash of soda.  Cheers to innovation!