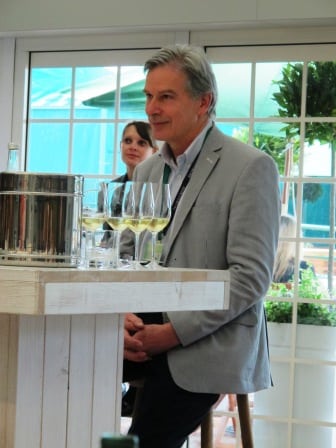 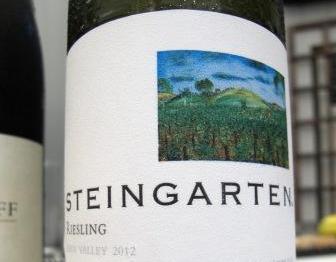 While Jacob’s Creek is among the UK’s best selling brands, the same cannot be said of brand Riesling.  Ironic then that Riesling is something of a speciality, even a tradition, at Jacob’s Creek and for its owner Orlando Wines, not least where even the company’s entry level Riesling is well worth seeking out.

As for its flagship Riesling, the special label (pictured) of the latest 2012 release of Jacob’s Creek Steingarten* celebrates the 50th anniversary of its acclaimed Steingarten vineyard in Eden Valley, South Australia.  (*Originally labeled Orlando, the iconic Riesling has been released under the Jacob’s Creek name since 2005).

Fittingly, 2012 is a cracker of a vintage – for Chief Winemaker Bernard Hickin “one of best in the last 20 years,”  which explains why he was in town to show it off, together with a tank sample of the 2013 and three earlier releases, the multi-award winning 2006, 2005 and 2002 Steingarten vintages.

His visits to Germany also lay behind his introduction of temperature controlled pressurised fermentation vats in 1953 – an innovation which ushered in a new era of Australian white wines.

Steingarten Riesling, for which the Steingarten vineyard was the sole source until the mid-90s, was first made in 1967 (a small trial bottling) and officially launched with the 1968 vintage.

These days fruit from the Riesling dedicated 1.74 hectare Steingarten vineyard is augmented by fruit from up to three blocks from Orlando’s Eden Valley holdings.  Steingarten forms the smaller proportion; total production ranges between 3000-3500 cases.  Says Hickin the aim is to keep it small and, most importantly, to retain the stylistic profile of the wine.

Like the Steingarten vineyard (itself expanded in 1985 and 2004), the blocks in question are mature (planted 1971-1977), east-facing (cooler) and located on the weathered rocky soils which the winemaker reckons account for Steingarten’s “intense mineral character – its chalkiness.”

Another change over time has been the introduction in 2004 of Geisenheim clone GM198 (the Steingarten vineyard was originally planted to Orlando’s so-called heritage clones, which are thought to derive from Johan Gramp’s original cuttings). According to Hickin it has been the major clonal planting over the last 15-20 years in Orlando Wines vineyards for Jacob’s Creek Riesling wines. I asked him what impact it had on the wine if any.  For him, the Geisenheim clone is the more consistent performer. As for flavour profile, he says it accentuates the wine’s lemon and lime character.

Although Steingarten has not been held back for release for three years (of bottle age) since 2009, as the tasting confirmed, this concentrated top-of-the-range wine is designed for cellaring and most certainly benefits from time in bottle.  I bought a case of the 2005 a few years ago and, on the strength of this tasting, wish I’d resisted the temptation to drink most of it so soon!

While broachable younger, older vintages of Jacobs Creek’s Reserve Riesling (produced since 2000 and “regionalised” in 2010) and the entry level Classic (made since 1984) also showed extremely well. The Classic is a great buy for enthusiasts of Australia’s mature lemon butter style to stash away for a few years. 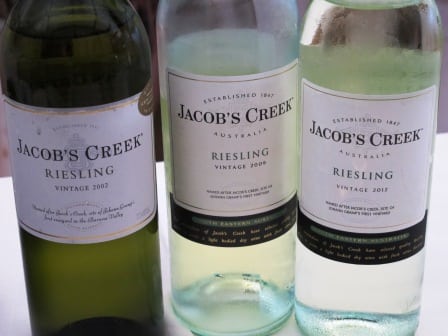 Punching above its weight

All three Rieslings in the range are made from free run juice (the first 500-550 litres of juice per ton of grapes, which has the highest acidity and lowest pH and phenolic content).  In true Australian style, even the Classic is fermented to dryness (with a maximum of 3-3.5g/l residual sugar).  While older wines show development in terms of palate weight/mouthfeel and flavour, for Hickin the use of screwcap since 2002 has enhanced the vibrancy of fruit and maintained the youthful greenish hue for longer than was the case under cork.

Here are my notes on the Rieslings which variety Hickin observed is super expressive of not just terroir, but also vintage. And as you’ll see from this article I wrote following a Riesling-focused visit to Australia (and Orlando) in 2008, as it develops Riesling can take you into unexpected food matching territory.

Grapes for the Classic Riesling are sourced from Clare Valley, the Barossa and Langhorne Creek.  The 2012 bursts with flavour and aroma. It’s pale with green glints and, in the mouth, sports zingy, mouthwatering acidity and grapey, musky/floral and lemon grass lift to its concentrated melon and lime fruit.  It’s attractively pithy (lime) on the penetrating finish.  Very good; youthful.  11.5% UK stockists include Sainsbury’s, Ocado, Booths, Budgens, Nisa, Palmer and Harvey & Londis.

Richer in terms of complexity and mouthfeel (a touch oily even) yet, even with four years in bottle, this kerosene and lemon butter nuanced Riesling maintains a bright, juicy core of fresh grapefruit.  A saline finish lends piquant freshness to its talcy finish.  Very good – really delicious. 11.5%

From a cool year, this Wine of Show at the Canberra International Riesling Tasting retains really impressive line for such a humble wine.  It’s silkily honeyed with sweet nutty, toasty hints. Structurally quite fine compared with the 2009. Though I wouldn’t keep it for any longer, it’s delightful drinking right now – really fine. 12%

Very 2012 in its perfumed, floral/musky exuberance, with a concentrated undertow of citrus and a hint of oilskin.  In the mouth it reveals very concentrated lime and grapefruit, a touch of minerality too.  Lively but well integrated acidity lends line and length.  Very good. UK stockists include Tesco, Ocado & Asda.

Significantly deeper in colour with yellow glints.  Similarly the nose and honeyed palate show attractive development with lemon butter and toast, that salty note which the 09 Classic had to the finish too.  But this is silkier, longer and finer.  Very good.

I found both this and the 2002 Steingarten to have sulphide reduction.  With time in glass this wine opened up, revealing a toasty palate, but I didn’t find it as balanced fruitwise as its predecessors, even taking into account that 2002 was a cool year.  Given that this was the first year in which these wines were bottled under screwcap I enquired if Hickin had since tweaked the wines.  He admitted that there has been an evolution in the yeasts used where, in 2002, they hadn’t fully taken on board the importance of neutral yeasts with a low nitrogen requirement when using screwcap.

This aromatic tank sample is from a very dry year but, importantly for Riesling, one without heatwaves.  That said, Hickin reported that warmer night time temperatures have meant that the vines continue to metabolise so it has been necessary to harvest earlier (by as much as 4-5 weeks in Eden Valley) at lower baumes to retain natural acidity. The 2013 retains some estery fermentation characters but, beneath that, an impressive concentration of ripe if tight lemon and lime fruit, with vivid lemon pips/lemon sherbert, pink grapefruit and spicy kaffir lime.  Bone dry with lively acidity and a minerality to the finish, it looks very promising indeed. UK stockists include Tesco.

Youthfully firm, crisp and tight knit, with great line and length to its charge of razor sharp grapefruit. Unlike its junior siblings, it’s not giving much away at the moment but it’s very pure, with terrific structure.

An enticing nose shows lemon and lime butter with hints of oilskin, which follow through on a very mineral, salty palate with an impressively youthful thrust of rapier-like acidity and floral musky lift.  Very good.

Richer, juicier and spicier with kaffir lime, bright lime, oilskin and minerals on a very long, rolling palate.  As Hickin observed, it’s more generous than the 02 and 06, yet it retains lovely line and has a sorbet-like clarity to its finish.

A deeper colour than its predecessors and yet, as mentioned above, with noticeable sulphide reduction which I found distracting (and have not previously picked up in samples of this wine tasted last year and in 2008).  In the mouth, thankfully the wine is much more present, indeed assertive than the 2002 Reserve, revealing an impressive concentration of pithy lime and grapefruit with toast, which builds in the mouth.  Very impressive structure, though I remained a bit distracted by the sulphide note. Shame.